The 2021 Gaelic football championship looms with an unmistakable and unfamiliar air of positivity around the game.

Much of this is because of the entertaining league campaign. The average score per game in Division One was a healthy 36.1, up from 33.9 in 2020. A figure that should be taken with a morbid dose of salt. No preseason tournaments, few friendlies and squad rotation have all played a part in the spectacle. These are strange times. 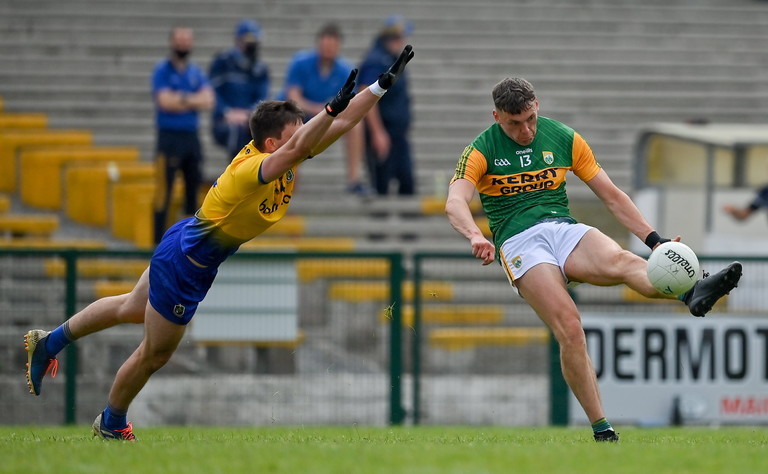 Typically, there cannot be such an overwhelming positive without a negative. The recent complaint is that "the art of defending is dead." Over the past five years, forwards have been tormented in their attempts to find a hairsbreadth of space. Now, apparently, they have it too easy.

Given the higher scoring rates and glut of goals, it is understandable how one could come to this conclusion. It is also inaccurate. During the era of blanket defences, nobody said the art of attacking was dead. It was widely accepted that certain conditions made their task extremely difficult. The reality is that the same is true for the modern-day defender.

What are those conditions? Firstly, the rules. Gone are the days when an electric forward could be bullied out of the game. Between black cards and improved cameras, man-markers have been forced to clean up their act. Pulling and dragging your way to a victory is no longer a viable option. 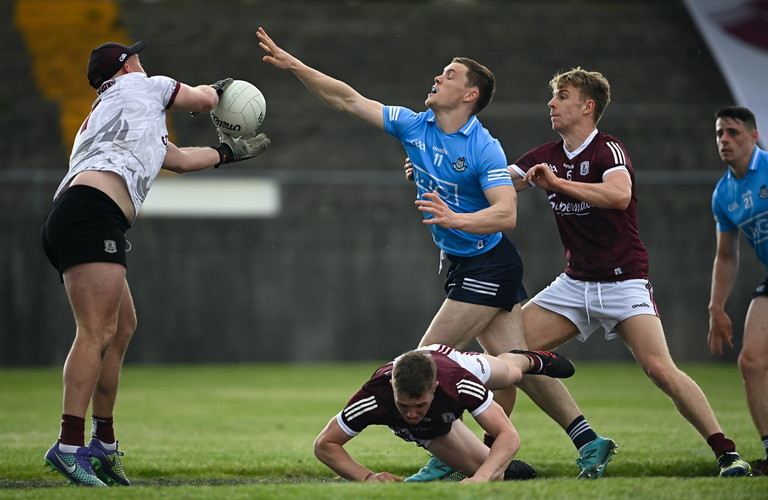 Thanks to the offensive mark, marking from behind the attacker is considerably less effective. It is a conundrum coaches are still coming to terms with. If the defender steps off, forwards can receive a handy ball into their chest and take the mark. If the defender gambles and plays out in front, it only takes one mistake for a misread to result in a goal.

The lax attitude towards steps is another grievance amongst some coaches. Generally, defenders are encouraged to try and get a hand in when the ball is played. If an attacker can sprint forward without bouncing/soloing the ball as often, it reduces the opportunity to engage.

This is not to say these are necessarily urgent issues in need of correction. The reality is that over the past few years the odds have overwhelmingly favoured the defender. There is no harm in tipping the balance, the sport is more enjoyable for it.

At the same time, good defending should not be punished. For example, last weekend during Clare and Mayo's Division Two semi-final, Cian O'Dea conceded a free for this tackle.

Eoghan O'Donoghue (green) drives down the wing for Mayo. O'Dea (yellow) scrambles to meet him. 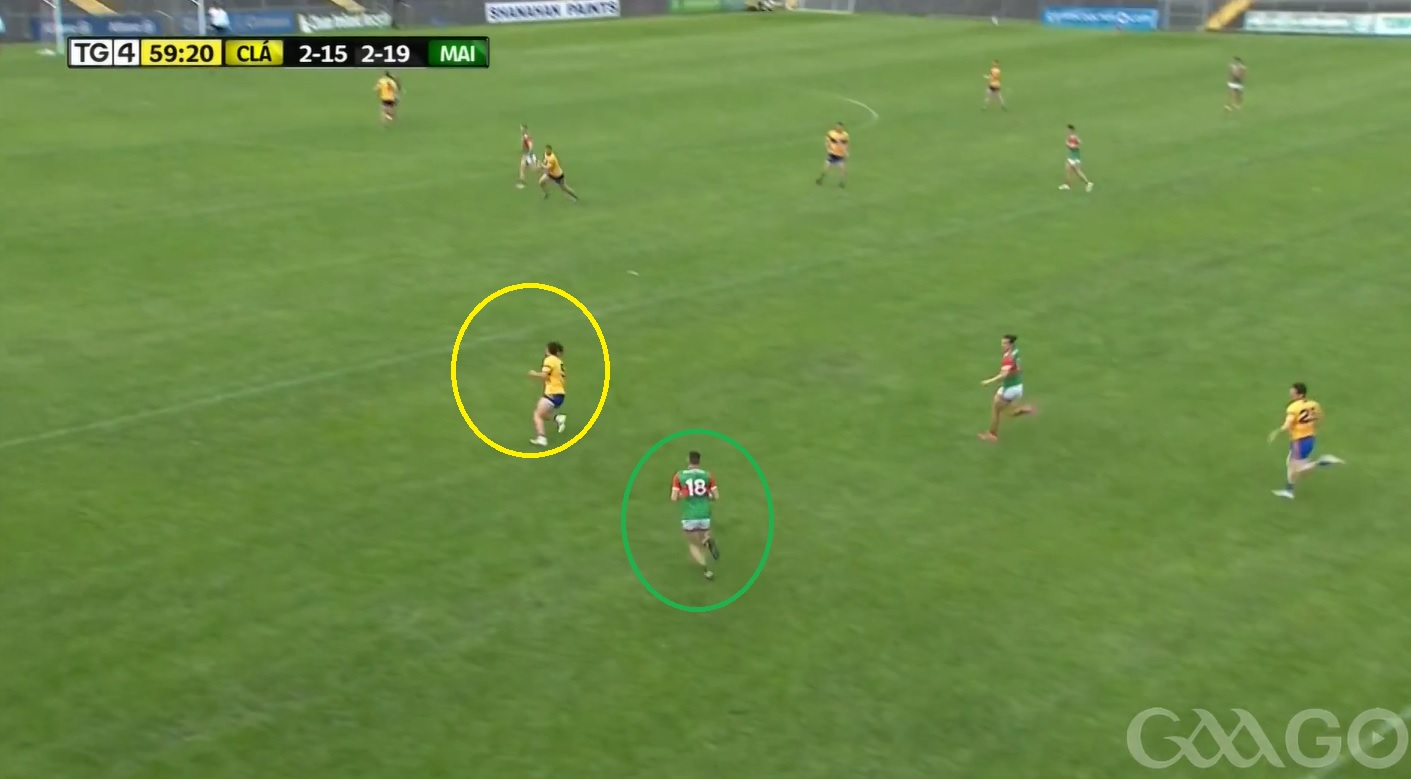 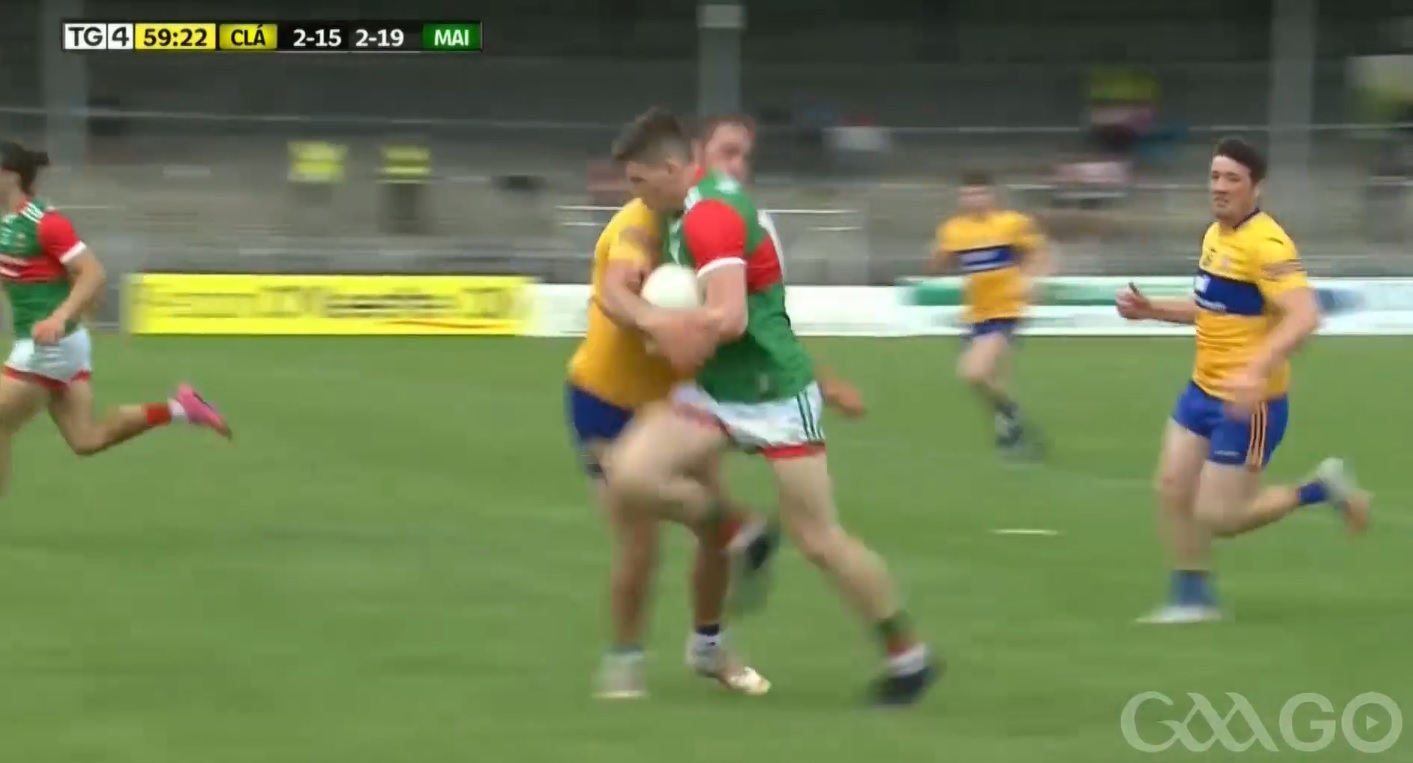 The ball breaks and O'Dea attempts to shoulder O'Donoghue. 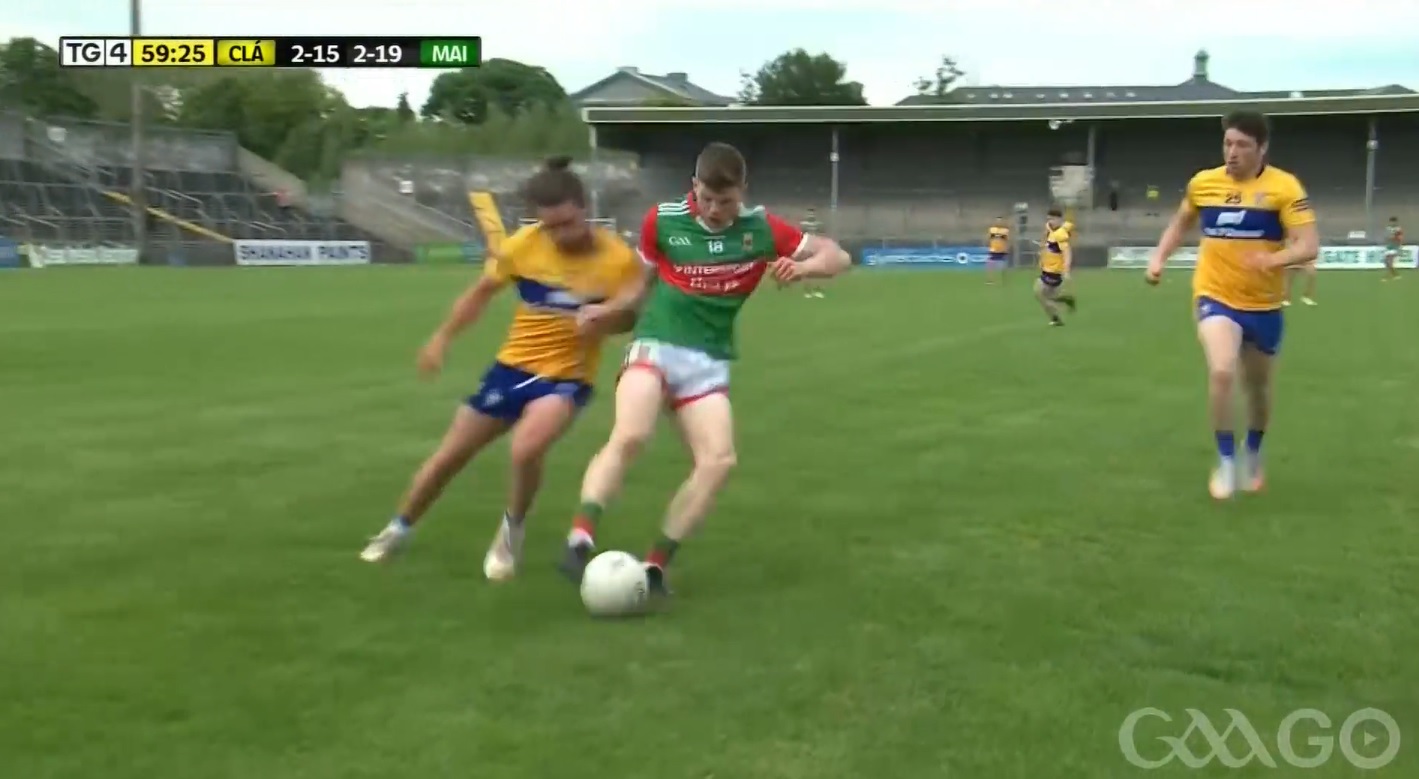 Mayo are awarded a free-kick. 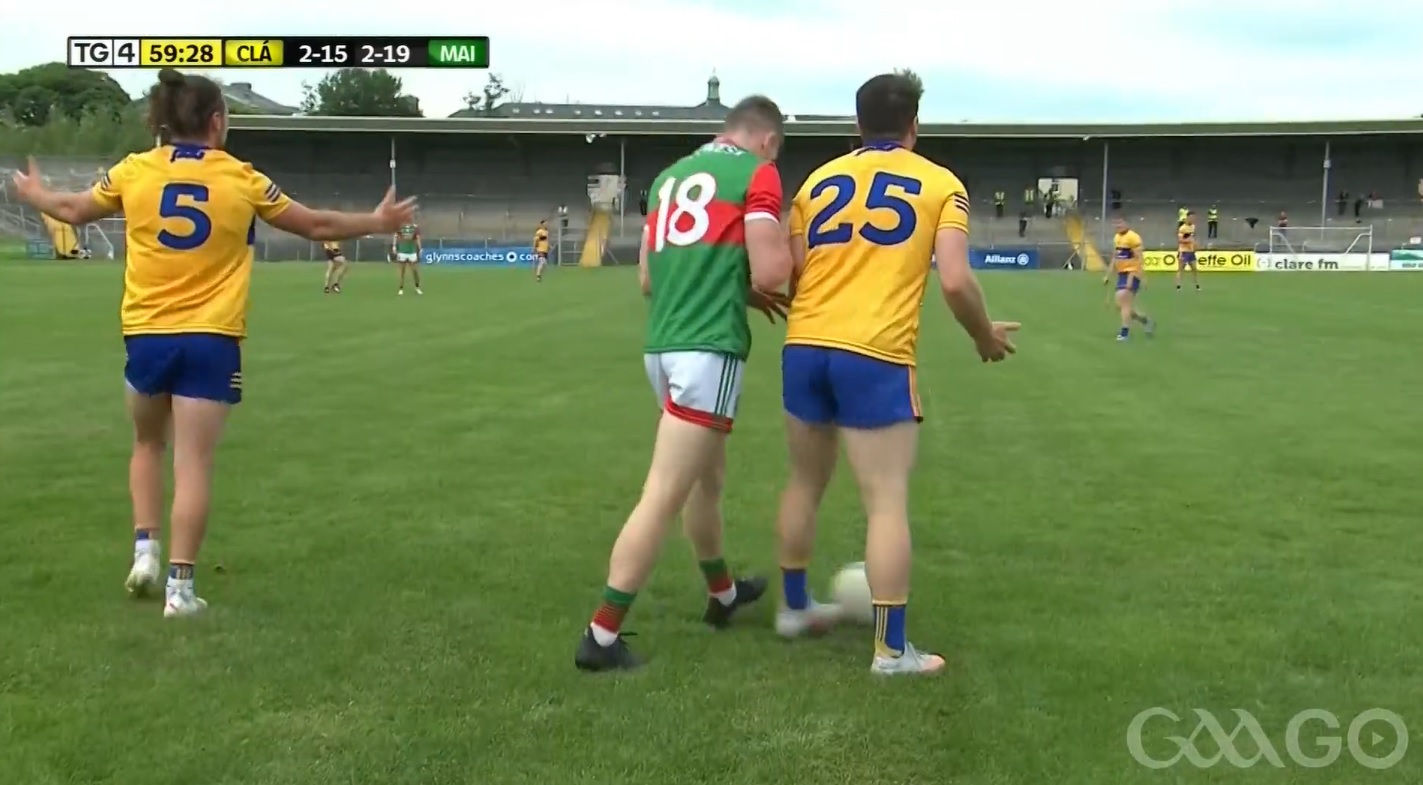 This example had everything we want to see from a passage of play. Attackers running at opponents, defenders carrying out their role in a hard and honest manner.

It is obvious that several teams have been spending time on their attacking play. Once again, this is a welcomed development. For too long, shelter was the priority. Now that offence is a prime concern, certain defensive fundamentals have suffered. However, this applies to every line of the field.

Attack and defence are not separate departments. Gaelic football is a fast and fluid sport. Every team is trying to find the balance between a robust defensive structure that allows for a quick transition to an efficient attacking one.

As usual, Dublin are the leaders in this regard. Their nearest rivals, Kerry, have lurched from one extreme to the other. Their issue was exposed when the two sides met last month in their Division One encounter.

Peter Keane's side failed to pressurize the ball when they were turned over in the opponent's half.

Just before half-time, David Moran kicked a ball long to his inside forwards. 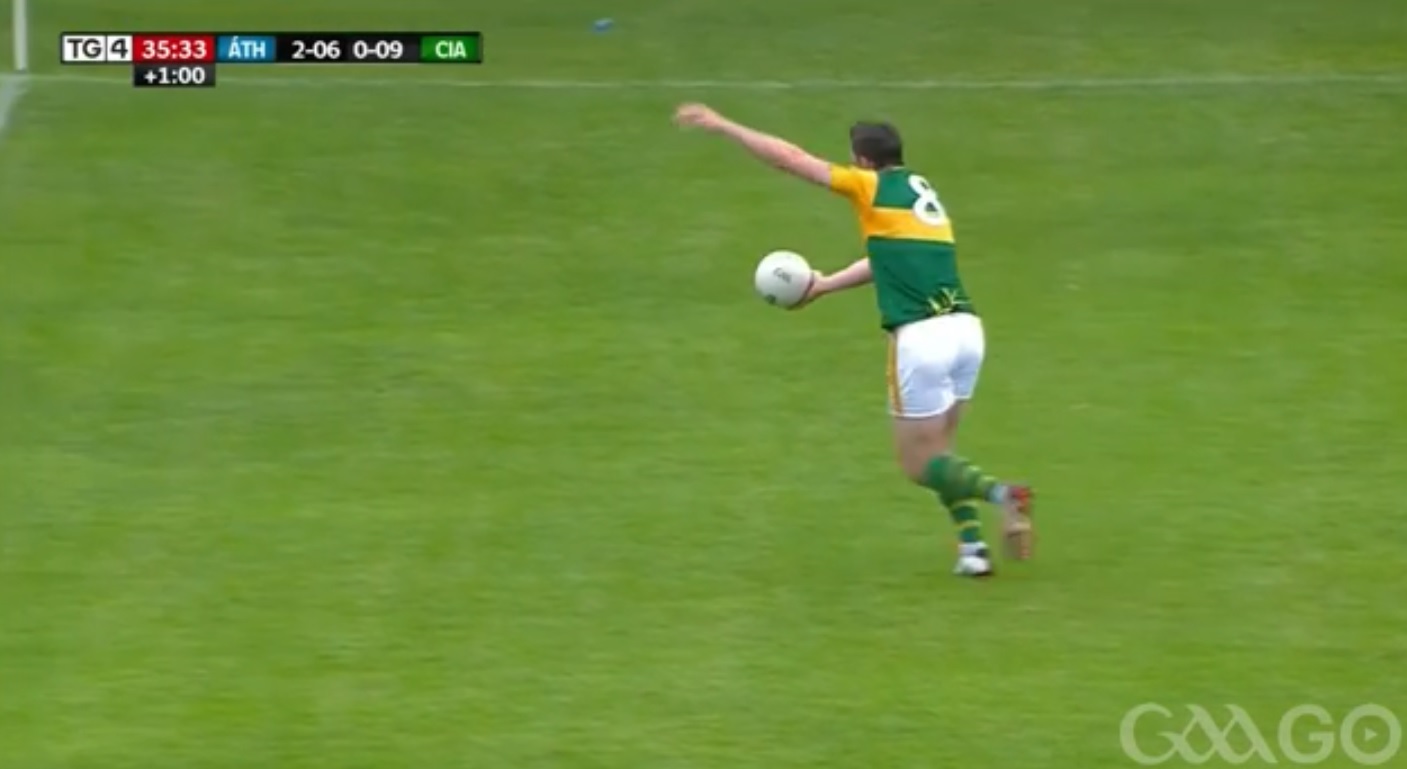 Dublin turn over and begin to build from the back. 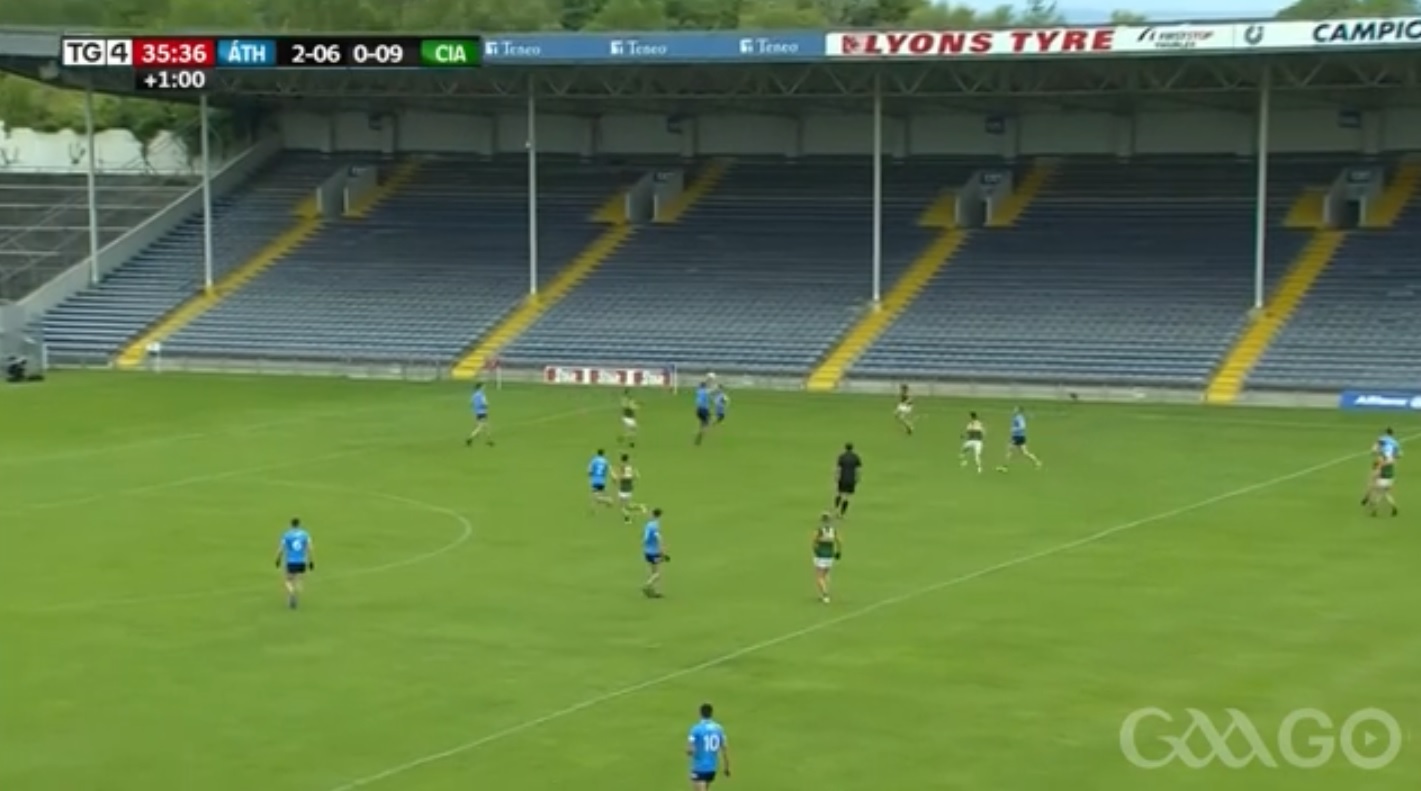 Kerry's forwards fail to press or put Dublin under any pressure. 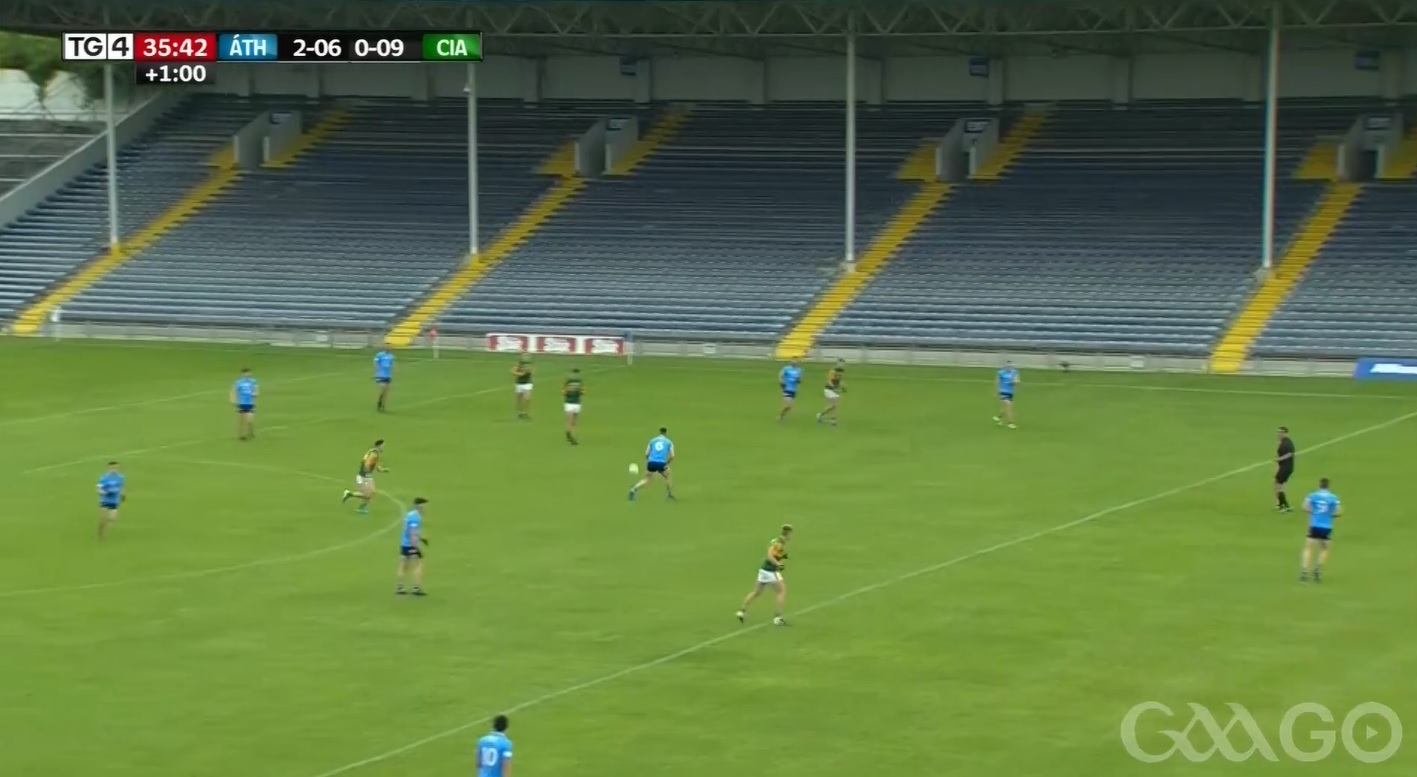 As Dublin continue to move forward, they find huge space have plenty of time. Scully can look up and kick a good quality ball to the edge of the square. 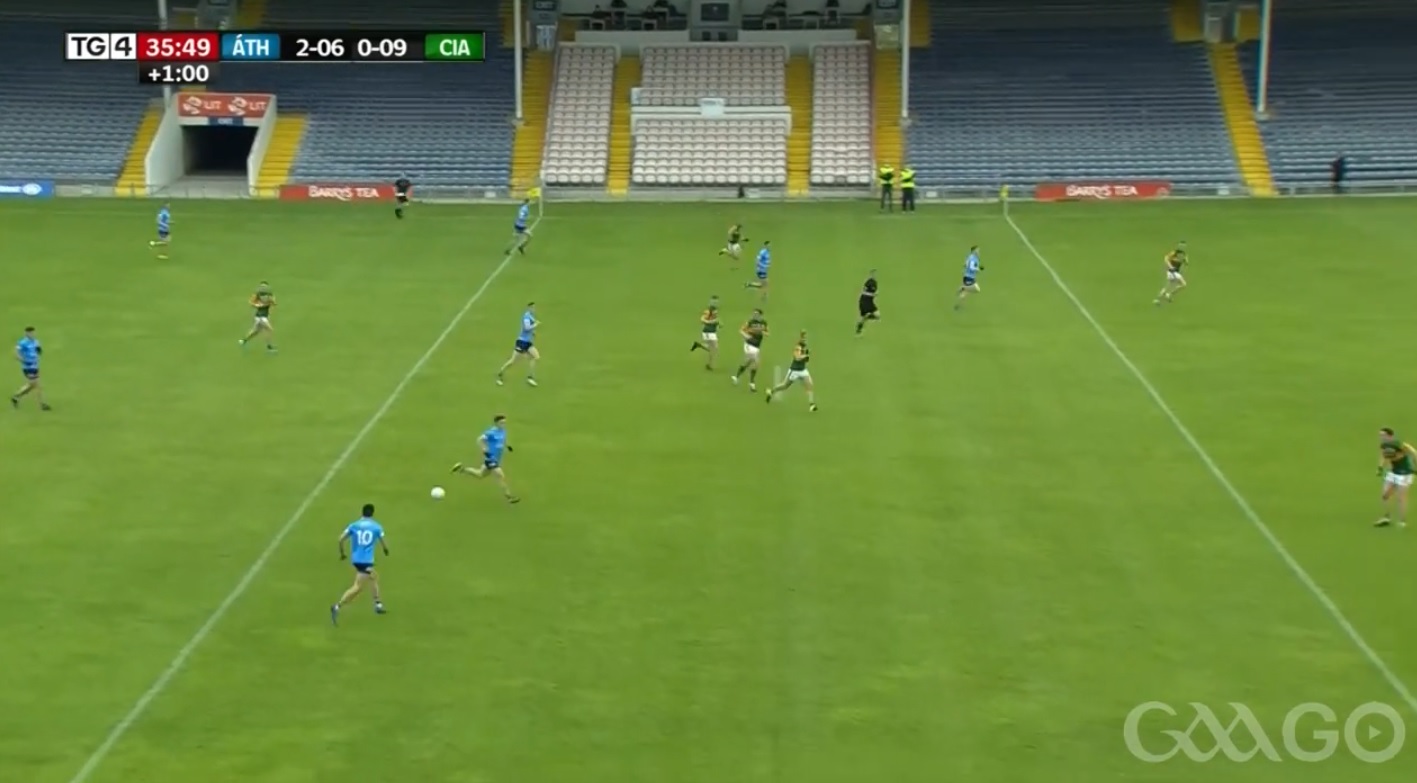 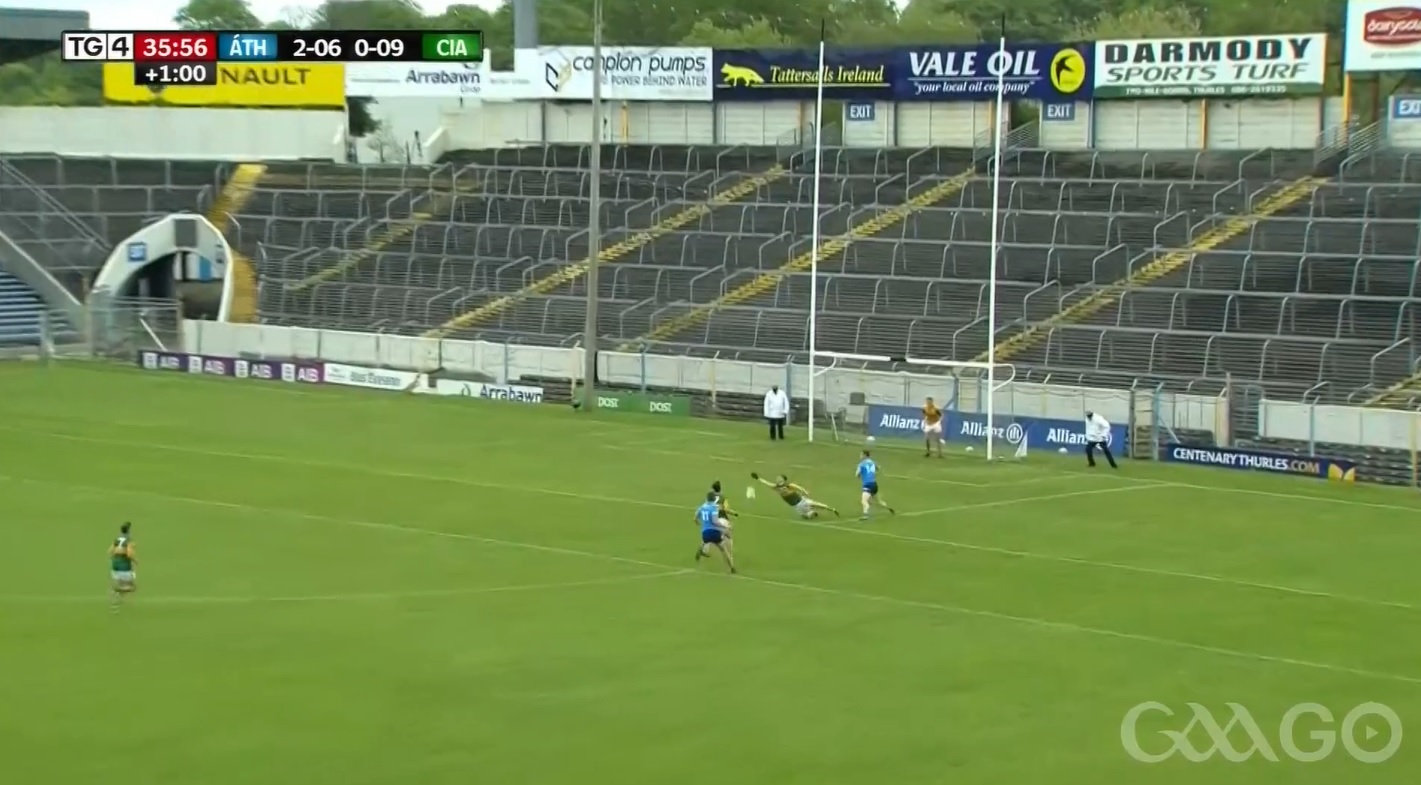 The likes of Con O'Callaghan and David Clifford are generational talents. When they receive good quality ball, they are unstoppable. In previous generations, players Paul Galvin or Brian Dooher were capable of maintaining an attacking threat while contributing on the other side of the ball as well. That role is required once again.

It is about the entire machine not just certain cogs. Over the past decade in the Premier League, the defence suffered but it was not because of defenders. The decline of the defensive midfielder played a huge part.

Tyrone have a similar issue. Feargal Logan and Brian Dooher are implementing a new system. Repeatedly, when their forwards lost possession they stopped moving and allowed their opposition to build methodically.

Prior to Kerry's fifth goal in Division One semi-final, Tyrone lose the ball and several attackers stop moving. 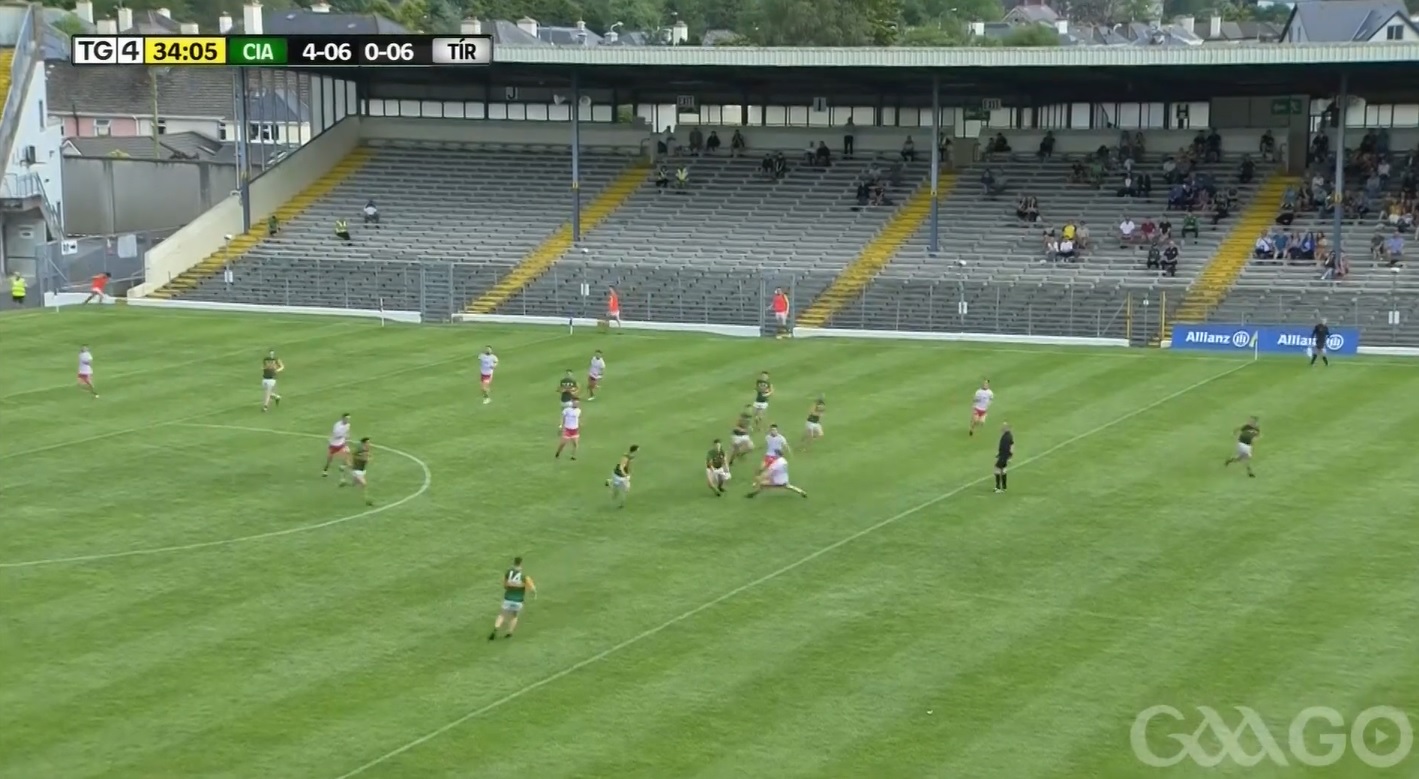 In recent years, Oisin Mullin, Michael Fitzsimons, Tom O'Sullivan, Ronan McNamee, Neil McGee, Johnny Cooper, Chris Barrett and Drew Wylie have demonstrated elite defensive attributes. The skill remains on display. What's more, they are all capable going forward as well. While it is their first task, most operate as more than mere defenders.

With sprinklings of an offensive revolution, their role is set to become even more challenging. It all reflects an evolving realm, and the increasing standards require to rule it.