'Because Austin Gleeson Is Such A Talent, He's Easy To Knock'

As part of our GAA Embedded coverage, each week we will profile a player in action over the coming weekend. This week, it's Waterford's Austin Gleeson.

Kieran O'Gorman was in a beer garden watching Waterford play Clare in the opening round of the Munster Championship last month when he heard someone pass comment about Austin Gleeson.

"Jeez, Austin hasn't touched the ball, only for the three points he got."

O'Gorman laughs thinking about the absurdity of it. For some people, Gleeson can never do enough.

"Because he's such a talent, he's easy to knock," says O'Gorman, who knows first-hand the ability Gleeson possesses.

The Lismore man was a selector under Sean Power when Waterford won the All-Ireland minor title in 2013, and the All-Ireland U21 Championship in 2016. Gleeson was one of the stars of both teams.

"From the first time I saw him, I thought, 'This fella is special'," he says.

"He could do anything with a hurley and ball. His athleticism is unreal. He has everything. I don't think there's a chink in his armour."

Gleeson was a goalkeeper in the Waterford underage development squads, but by the time minor came around, he'd moved outfield and was part of the team's spine at centre-back.

The Mount Sion player had been tested at centre-forward during a pre-championship challenge game against Dublin. He spent so much time essentially playing centre-back that O'Gorman and Power thought it best to just start him there.

Waterford lost to Tipperary in the first round of Munster, but beat Clare in a playoff to set up a semi-final against Cork. Eight points down at one stage, Waterford fought back to win the game in extra-time. 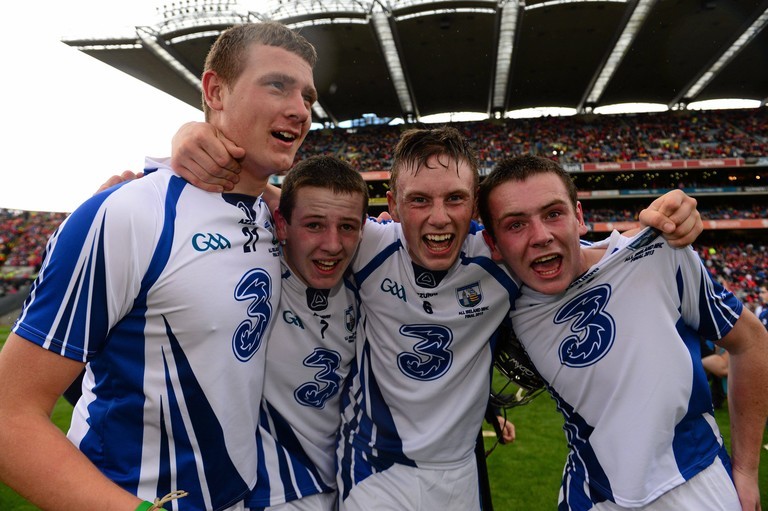 "Aussie, in particular, was insane that day," Kevin Daly, who captained the Waterford minors that year, said in an interview with WLR FM last year.

"That was the day that he announced himself. He really showed the star potential that he had.

"You just know certain fellas have it. He would have stood out in the senior team at that point even. I remember the lad he was on, Kevin O'Neill, would have actually been a decent player in the air as well. Aussie was just on a different level.

"You can see it now, he has the ability to do things that no one could expect."

One particular moment during the game at Páirc Uí Rinn is still vivid in O'Gorman's memory.

It was straight across the end line. No one else would have dreamed of doing that. People are doing it now but this was eight years.

He just shouted 'Gavin', if your man had opened the pocket of his shorts, the ball was gone into it. He just put it straight into his hand, and bang, we were up the field. We went from being under pressure at our own corner flag [to being on the attack]. It was unbelievable what he did.

He was outstanding that night. We lost Mikey Kearney through concussion before half-time. He was big player for us. Austin covered every blade of grass in Páirc Uí Rinn. I think he caught one ball that definitely would have been going over the bar. He did so many good things, it's hard to remember them all.

The Munster final against Limerick was a learning experience for Gleeson.

"We were three points up, and Austin got the ball at centre-back," says O'Gorman.

"He went on one of his solo runs. He probably should have laid it off to Stephen Bennett. It would have been the insurance point, and we would have gone four up. He got dispossessed. Tom Morrissey got the goal to equalise the game.

"I just said to Austin after - I'd be half slagging lads, 'Jeez, boy, why didn't you pass the ball to Stephen?' - and he said, 'You know what Cuggs? I saw my name in lights'. That was a bit of naivety in an 18-year-old.

"It never happened him again. I don't think for the rest of the year that he passed the halfway line on one of his solo runs. He actually learnt from it.

"He's a good character. He got fellas around him going. He would have been vocal off the pitch as well. He'd be a natural leader.

"Because he's so exceptional on the pitch, when other fellas see what he can do... At 18, you're impressionable and people would say, 'If this fella thinks I'm good, maybe I can do it'. He was very good that way; himself, Stephen Bennett and Kevin Daly were the three big leaders on that team." 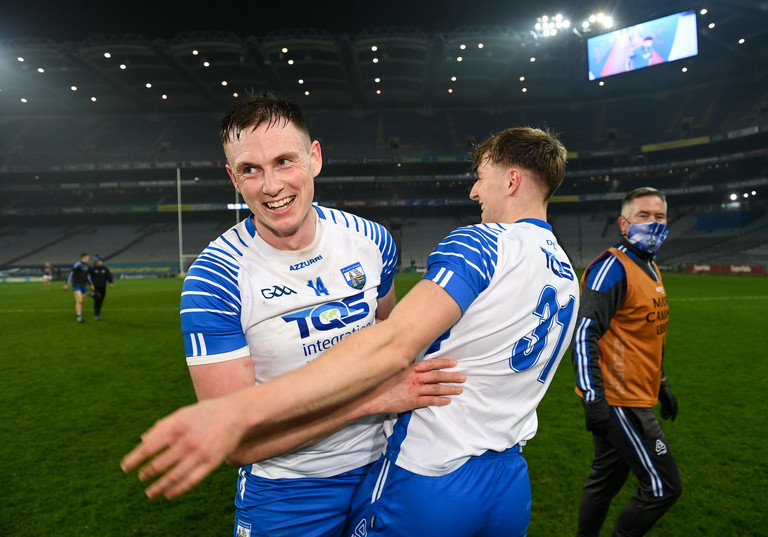 Waterford lost the Munster final replay - their second defeat of the championship - but it would be their last. They beat Antrim in an All-Ireland quarter-final, Kilkenny in the semi-final (Gleeson was Man of the Match), and Galway in the final. It was their first title at the grade in 65 years.

Those awards weighed heavily on Gleeson the following season. He felt the need to justify why he'd won them. At times, that insecurity made him look a standard definition version of the previous year's ultra HD Austin Gleeson.

Waterford reached the All-Ireland final that year, but lost by three points to a famine-ending Galway side. Gleeson was marked out of the action by Gearóid McInerney, and barely touched the sliotar in a game he described as his worst in a Waterford jersey.

In 2018 and 2019, the picture wasn't much clearer. Sitting in Croke Park at a media day in late 2019, Gleeson told Balls.ie that his head had been turned by the opportunities which came with being Hurler of the Year. He accepted every invitation he was offered, and his fitness suffered as he failed to match the work ethic of winter 2015.

Confidence had also been at a low ebb, and he admitted, "I wasn't a happy person the last two years". With Waterford knocked out of the championship early that year, he took the opportunity to spend two months in New York. It was his first real time outside his native county, and gave him headspace to think: He was in his 20s, but hurling careers are getting shorter and shorter.

"I never really copped on and matured to realise that your career could be over in the blink of an eye," he said.

"It’s something that really clicked with me this year. I said I was going to give my all to everything, that I’m going to do that from now on - there’s going to be no second measures."

Once some lockdown pounds were lost, 2020 turned into Gleeson's best season since 2016. In the All-Ireland semi-final against Kilkenny last November, when Waterford needed him the most, Gleeson was unstoppable. He hit four points from play in the second 35 minutes as his side won by four. They had been nine points down at one stage in the first half. Gleeson's five points in the final were not enough to stop the Limerick steamroller.

Last weekend, when Kyle Hayes went on a lung-busting run capped with a goal for the ages, and Michael Duignan declared that no other player could have scored it, the thoughts of many turned to Gleeson. He had scored a goal like it in 2014 against Cork. Even in that 2017 season, when his confidence was so low, he was still producing breathtaking moments of athleticism and skill. 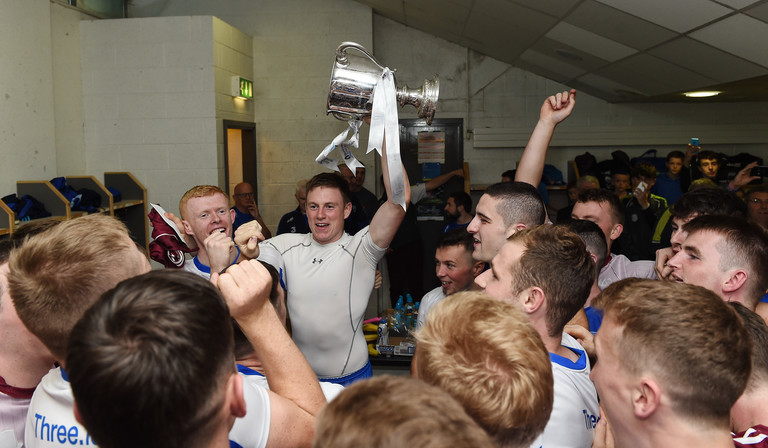 10 September 2016; Austin Gleeson of Waterford celebrates with the cup after the All-Ireland U21 Hurling Championship Final against Galway at Semple Stadium in Thurles. Photo by Ray McManus/Sportsfile

Motivation no longer seems to be an issue for Gleeson. Now it's about where he plays.

"That has been his problem over a year or two: What's his best position? Is he a centre-back, midfielder, centre-forward, full-forward?" says O'Gorman.

"When Waterford are chasing games, they play him everywhere.

"Ken McGrath was the same. He was wing-forward, full-forward, centre-forward. After a while, he moved to centre-back, and everyone always thought it was going to be Ken's best position. That's where he made a huge name for himself.

"I think he should be given a position for the year because he's being shipped from pillar to post. It can't be easy on him."

Stunning skill from Austin Gleeson for a sensational point. Join us live on @Rteone or highlights later on @TheSundayGame at 9.3pm on @rte2 pic.twitter.com/EFHxNfliE5 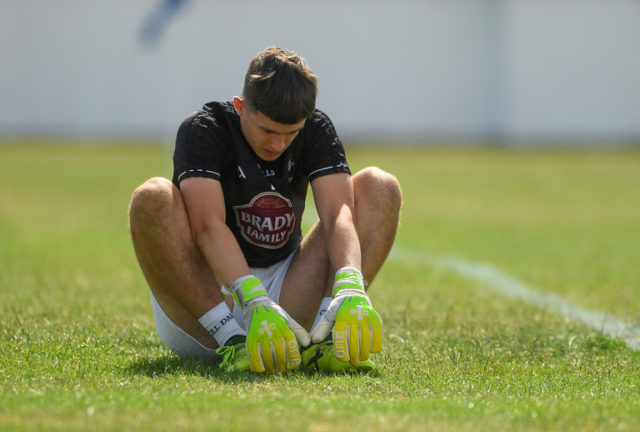