Balls.ie Has A Brilliant Plan To Revamp The GAA Championship. Christy Cooney, You Can Thank Us Later 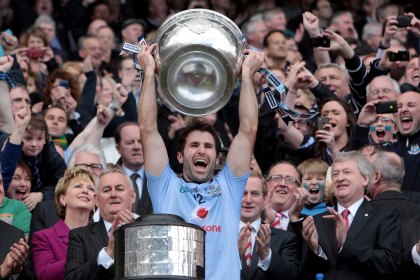 A few drinks were had last night amongst a couple members of the Balls.ie braintrust. Talk turned to scrapping the Championship and the League re-imagining a better, fairer All-Ireland series. The NFL was on somewhere in the background, and it cast an influential spell. Colm Parkinson had a go last week, but we might have outdone him. Take note, Christy Cooney - I think we might be onto something.

Point #1 - Visionaries looking for a new kind of All-Ireland championship have often called for a Champions League model. This is misguided. A far better basis for a new league exists across the Atlantic. It's called the NFL, probably the most exciting, competitive league in world sport. Whatever your feelings on American football are, you can't begrudge a league with a socialist model that delivers true parity and genuine uncertainty before every season.

Point #2 - Are you aware that there are 32 NFL teams and roughly 32 footballing counties?

Point #3 - Don't you think the NFL's scheduling algorithm, which is designed to create equality, could be perfectly employed to create a competitive gaelic football league that ensured Division 3 and 4 teams had as much of a chance and Division 1 or 2 teams?

Let's see how it looks on paper. First we borrow the NFL's league design of 2 conferences with 8 divisions of 4 teams and apply it to Ireland.

Season structure: Like the NFL, each team in the Championship would play a 16 game schedule. With bye weeks, this would make the season proper about 4 months long.

The structure of scheduling would also mirror the NFL. Let's use Dublin as an example. In every season, they would play every team in their division - Kildare, Meath, and Wicklow - home & away (for a total of six games). They would then play four games against the members of a "another division within the conference on a rotating three year basis for another four games" - let's call it the Ireland midlands division meaning games against Offaly, Laois, Longford and Westmeath. They would then play "four more games against teams from a division in the other conference" - let's call it Ireland West meaning games against Galway, Sligo, Mayo, Roscommon. Finally they would play "two intraconference games based on last year’s standings", so we'll call that Armagh and Tyrone.

To me, that's a far more rigorous test of Dublin's All-Ireland credentials than their path to the All-Ireland this season, and that's not even counting the playoffs.

Picking an All-Ireland winner: Borrowing again from the NFL - Each division winner would automatically qualify for the playoffs as well as the two best non-division winners in each conference. Three rounds of playoffs would take place and the two conference winners would play in the All-Ireland final.

This method safeguards local border rivalries, while breaking down the needless provincial borders. Kerry and Cork play twice a year, which seems dangerous at first, until you think of the wild card system. Some divisions are stronger than others, but the playoff system ensures that the cream always rises to the top.

New York and London would have a play-in game to determine who would be involved. (Kilkenny can play the winner if they like). Fans of the minnow counties are getting 16 days out here instead of 1 or 2 and 'strength of scheduling' rule ensures a few winnable games each year.

With a sixteen week schedule, three weeks of playoffs and the All-Ireland, the season would last five months, from the May bank holiday weekend to the last Sunday weekend in September.

The Club Championship would have to be radically revamped as well and turned into a winter competition that stretches from November to April. (The pre-season cups would be scrapped as well) Not ideal, I know, but in my opinion it is a price worth paying a Championship that would be radically more exciting. Can you imagine 16 football games happening every weekend throughout the summer? This plan takes the best of the League and the Championships and merges them, while getting rid of the awkward back door.

Football
7 years ago
By Ger Gilroy
Ger Gilroy's Top 5 Sports Events He's Ever Been To - Tell Us Yours
GAA
8 years ago
By Mark Farrelly
A Great Story Regarding The Greatest GAA Picture Ever
GAA
10 years ago
By Donny Mahoney
Hurling In The Cody Years: Graphs That Reflect An Era Of Domination
Previous Next

Football
7 years ago
By Ger Gilroy
Ger Gilroy's Top 5 Sports Events He's Ever Been To - Tell Us Yours
GAA
8 years ago
By Mark Farrelly
A Great Story Regarding The Greatest GAA Picture Ever
GAA
10 years ago
By Donny Mahoney
Hurling In The Cody Years: Graphs That Reflect An Era Of Domination
Popular on Balls
Football
6 hours ago
By Eoin Harrington
Juan Mata Questions Manchester United Management After Dire Season
Golf
2 days ago
By Gary Connaughton
Padraig Harrington Glad He Didn't Have To 'Make A Decision' On Saudi Golf League
Football
1 day ago
By Gary Connaughton
The Frank Lampard Love-In After Everton's Survival Was Downright Bizarre
GAA
2 days ago
By PJ Browne
'It Came At An Awkward Time. I Didn't Think It Would Be So Bad'