On Monday, Barry John Keane sat celebrating in a Boston bar with footballers from all over Ireland.

From Laois, there was Gary Walsh; from Westmeath, Ray Connellan; from Dublin, Shane Carthy; from Tyrone, Mark Bradley; from Roscommon, Ciaran Murtagh. They were all part of the same team: Donegal Boston.

"Thank God I was coming home on the Tuesday night," Keane, a 2014 All-Ireland winner with Kerry, tells Balls.

"They are still going."

The celebrations were due to a minor miracle which had occurred a day earlier. Seven points down against Aidan McAnespie's with four minutes to play in the Boston SFC final, Donegal rose from the dead to win by a point.

"It was crazy," says Keane, who scored two of the three goals which won his side the game.

"That was their first loss the whole summer. We’d lost a few. Our main players only came out in the last six weeks. They had their team established for most of the summer and we couldn’t really get it going. We knew that if we clicked [we could win] - it only clicked with four minutes to go.

"I got a goal. The next kickout, they kicked it over the sideline; we kicked it in and Gary got a penalty. They went down then and got a point. They got turned over and we got the goal. That was it: game over, ball burst."

Last minute winner by Barry John Keane to win the Boston Championship for @DonegalBoston He sent it to me wanting the people of Ireland to see it. Reckons he’ll get the call for Croker @starryboy14 @GmailMahony pic.twitter.com/6jWrBnNFEZ

That 29-year-old was free to spend six weeks of his summer in the US is a sore enough point. After nine years involved with the Kerry seniors, he was deemed surplus when Peter Keane named his first pre-season panel last winter.

It's the second championship he's missed since making his Kerry senior debut in 2010 under Jack O'Connor. After playing three games for Eamonn Fitzmaurice in the 2013 league, he was unloaded from the group.

He went on to establish himself as a regular in Fitzmaurice's Kerry matchday squads; an impact sub who always made an impression - usually a brace of points.

Like this summer, 2013's was spent in Boston, back then playing for Shannon Blues, a club he calls a strange brew of players from Kerry, Roscommon and Sligo.

"I have a lot of friends from home who are living and working over there," says Keane, explaining how he ended as what he believes to be Donegal Boston's first Kerry recruit.

They’d be hopping off you, ‘What are you doing for the summer?’

I told them to give me a call. They told me about going over - they put you up and get you a job, sort you out. I said why not, it’s only six weeks.

Explaining to those back home in Tralee how intensely Gaelic football is taken in Boston isn't easy. Just five teams populate the senior championship. Games are played at the Irish Cultural Centre in Canton, a town similar in size to the Kerry capital situated 15 miles southwest of Boston.

Teams are required to play six home-based players. Home-based is an ambiguous term in this respect. It could be a fully-fledged American, an Irish person resident in the US, or, most tenuously of all, someone who's been in the US and registered prior to April 30th. 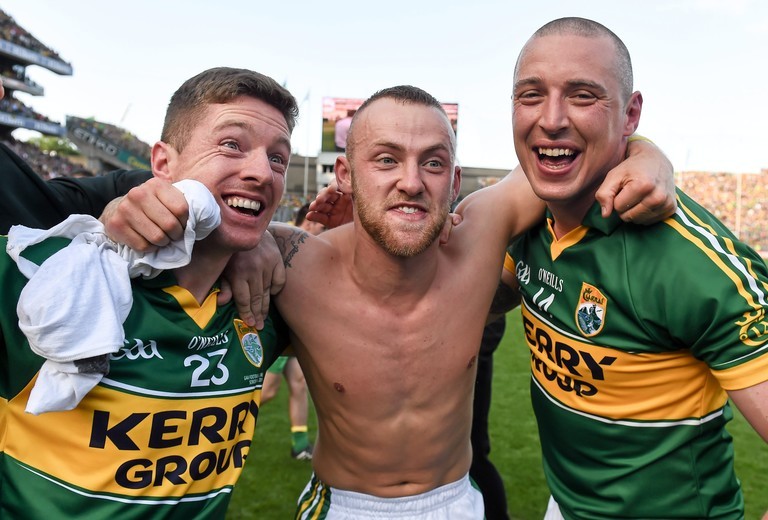 "Their football [season] is only on for three months and it’s a small community," says Keane.

"It’s a small town and everyone knows each other.

"It’s massive. I’d tell people, it’s nearly bigger than club championship here - they’d be laughing. Until you go out yourself, you don’t really realise how serious it is and how much they put into it; they give everything to it, everything."

Along with winning the senior title at the weekend, the club also won the junior A and B championships. Even those teams had players who have skirted the fringes of inter-county teams like Cory Gallagher and Kane Barrett with Donegal. Colm Cooper's nephew, Aaron Murphy, was on the junior B side.

Of the other clubs in the competition, Galway Boston had Mayo trio Cian Hanley, Shairoze Akram and Adam Gallagher among their numbers and the Connemara Gaels side which Donegal defeated in the last four had Tipp duo Colm O'Shaughnessy and Kevin O'Halloran and Clare's Keelan Sexton.

"There was a lot of quality there this year," says Keane.

From the semi-finals, the standard was probably higher than Kerry Club Championship. The final was like a championship qualifier.

You probably had 11 or 12 senior county players that were on the field between both teams. You had a lot of players who were county U21s.

Between the three Donegal Boston teams, approximately 45 players trained together every Tuesday and Thursday. While they enjoyed themselves after games on the weekend, training was no joke (apart from the goalposts).

"You wouldn’t see it back here numbers-wise," says Keane.

"You’d be splitting up if you’re an A and B team, doing different sessions.

"We found it hard to get a field. You’re using soccer goals, getting two plumbing pipes and tying them onto the top of the posts.

"The first night we landed, it was a pure Donegal setup - it was just running, running, running. I hurt my quad, definitely gave it a good twinge, the first Tuesday night and had to take a week off. I could not walk.

"I didn’t know what happened my body. It was running for an hour-and-a-half straight." 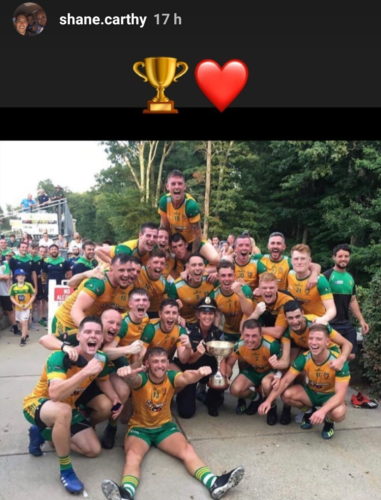 When deciding to head over, the potential Donegal Boston line-up had a magnetism for Keane. Diarmuid Connolly would have been pulling on the Donegal colours this summer rather than the Dublin ones had there not been an issue with his ESTA.

Keane was just off the plane to Boston when he got wind that he and Connolly might not be lining out together. A friend picked him up at the airport and, with a Dub along for the ride, Keane mentioned he'd got a few texts. There came a tap on his shoulder. The Dub was a good friend of Connolly and confirmed the news.

While in the States, Keane watched as many championship games as he could. He and nine others would meet up at a house in South Boston, hook a laptop up to a TV and watch matches on GAA Go. Kerry's semi-final win against Tyrone gave him a good week of bragging rights over Mark Bradley.

Now home, and happy to be reunited with his nearly three-year-old son, Keane hasn't given much thought to the possibility of returning to the Kerry panel next year.

I just said, ‘I need to get back and enjoy my club football’. You could be stuck in a rut in there [the Kerry panel]; a year could go by and you’ve gone backwards or you haven’t even improved because you’re not really playing much.

He'll be in the stand at Croke Park next weekend for the All-Ireland final hoping Gavin O'Brien gets a spot in the matchday panel alongside his other Kerins O'Rahillys clubmates Tommy Walsh and David Moran.

"Club football is coming around and that’s all that matters to me," says Keane.

"I’m just gone 29 and it’s my first year captaining Kerins O’Rahillys. I’ve been around long enough now and never really wanted to be captain, I preferred to just actually perform on the field.

See Also: 'This Is Not Irish Dancing' - Richie Hogan Has Say On All-Ireland Red Card

Football
6 hours ago
By Gary Connaughton
Report: Kevin De Bruyne Set To Miss Out On Fortune After City's CL Ban