The Best Dublin XV Of The Television Era

For the week that's in it, we've decided to have a look at the two dominant counties in Gaelic football and see just who has been the best of the best over the last 50 years. We'll get to Kerry tomorrow, but let's start with the Dubs...

Since Kevin Heffernan was appointed manager in late 1973 by a Dublin county board who didn't know what they were in for, the Dubs have won 11 All-Ireland titles over the last 45 years, and will be hoping to add another one this Saturday.

There's been many great players, some of whom were lucky enough to arrive during times of prosperity, others who were destined to play in eras when All-Irelands were scarce. A couple of those guys have earned their place on here.

Here is the best XV of the lot. Arguments welcome and entirely expected. 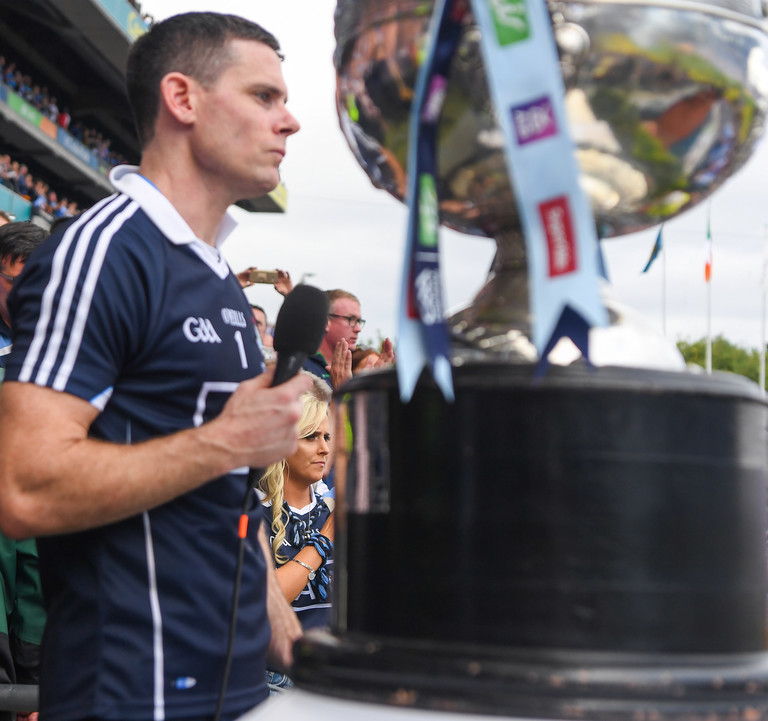 Goalies last forever. Dublin have had four primary No.1s in the last 50 years. And that includes Davy Byrne who only occupied the jersey for four seasons before quitting abruptly. The others are Paddy Cullen, John O'Leary and Stephen Cluxton.

Paddy made a fine save on Liam Sammon to be sure, John O'Leary captained the team to an All-Ireland in 1995, but neither were accused of revolutionizing the position. 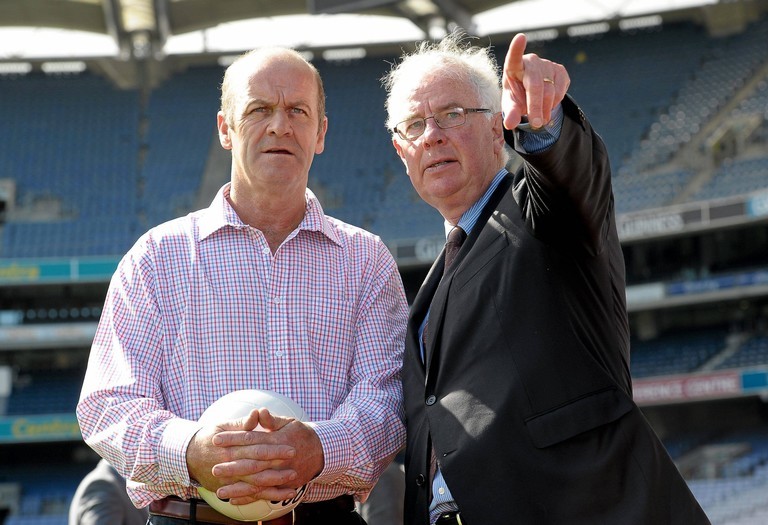 Toss of a coin between Gay O'Driscoll and Kelleher for the corner back slot. Kelleher steals in by virtue of the fact that he won four All-Stars in five years between 1974 and 1978. 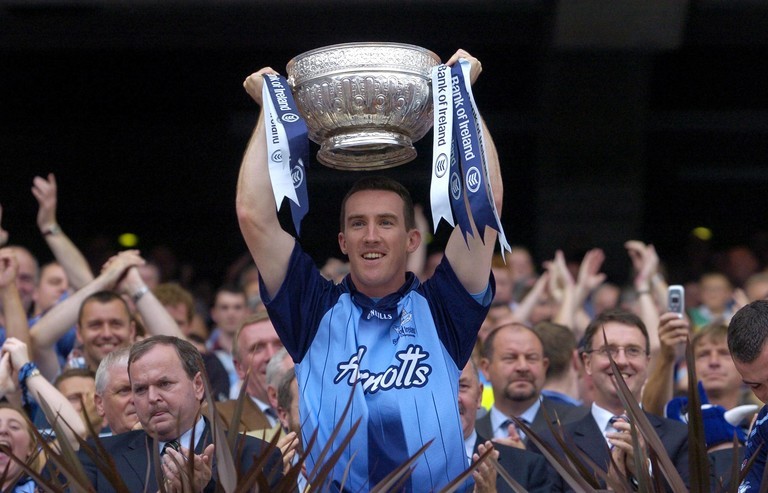 Soldiered away during a sometimes frustrating and often just plain bleak era for Dublin football. He arrived into the squad in 1995 but played no part as the Dubs finally heaved themselves over the line against Tyrone in the All-Ireland final.

An inspirational figure in the full back line, Christie played long enough to win a few Leinster titles in the noughties. During the lean years of the late '90s, he was usually lauded as the Dubs' best performer.

Christie just about pips his modern-day equivalent Jonny Cooper, his  '70s and '80s predecessors Sean Doherty and Gerry Hargan to the No. 3 slot. 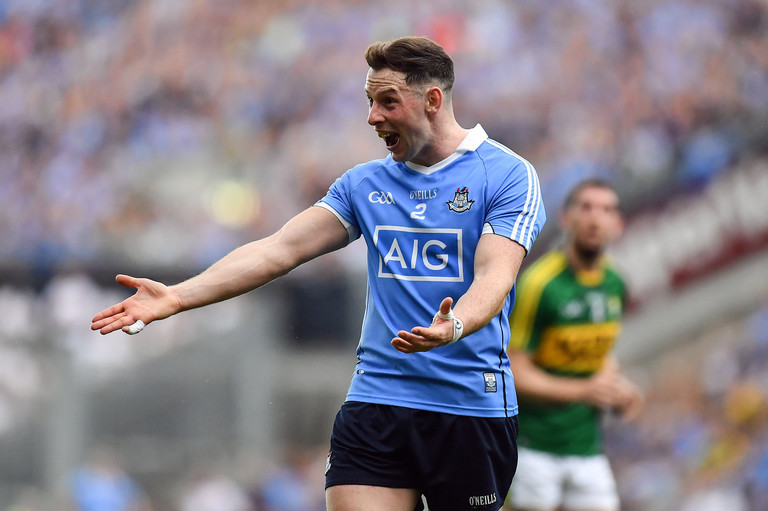 Dublin's impish bold boy in the corner, Philly was a serious contender for Footballer of the Year in 2015 and 2016. The original "modern corner back", McMahon is no stranger to marauding forward to kick a few scores. Wins out over the likes of Gay O'Driscoll, Jonny Cooper and Mick Fitzsimons. 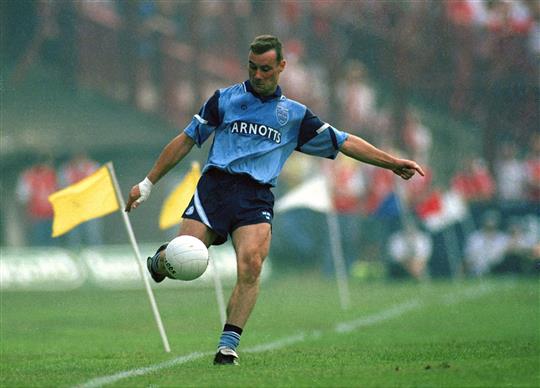 The Man of the Match in the 1995 All-Ireland final, Curran's time with Dublin was divided into two spells. The first half entailed plenty of August and September epics in Croker, desperately chasing the All-Ireland title. Curran was arguably Dublin's best player on a team that should have won a lot more. The second half of his career consisted of losing to Meath and Kildare and struggling to get out of Leinster. 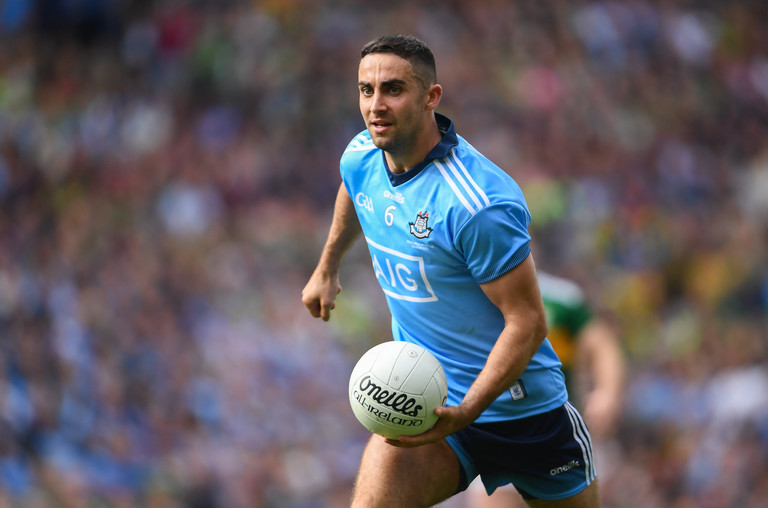 Possibly the most competitive spot in the whole team. The Dubs have been exceptionally strong here down the year. Trying to pick a winner from McCarthy, Kevin Moran, Cian O'Sullivan, Keith Barr and Tommy Drumm.

O'Sullivan plays in a sweeping role and isn't a traditional centre back. The brilliant Kevin Moran won two All-Ireland medals in three seasons but his career was sadly cut short by association football. He also suffers from David Hickey's allegation that he couldn't pass the ball.

Tommy Drumm only won the 1983 All-Ireland final from the centre back slot having picked up the first couple of them from wing back.

Keith Barr, a powerful and rampaging centre back who knew how to rattle the net, thrilled the Dublin supporters all through the 90s. The 1995 All-Ireland final win was, in many respects, built on the back of an exceptional half-back line.

However, we've gone for McCarthy. Again, not a traditional number 6, he's at home at wing-back or at midfield, but like Jim Gavin, we have to fit him into the team somewhere. Man of the Match in the 2017 All-Ireland Final, McCarthy has been a crucial cog in Dublin's six All-Irelands this decade. 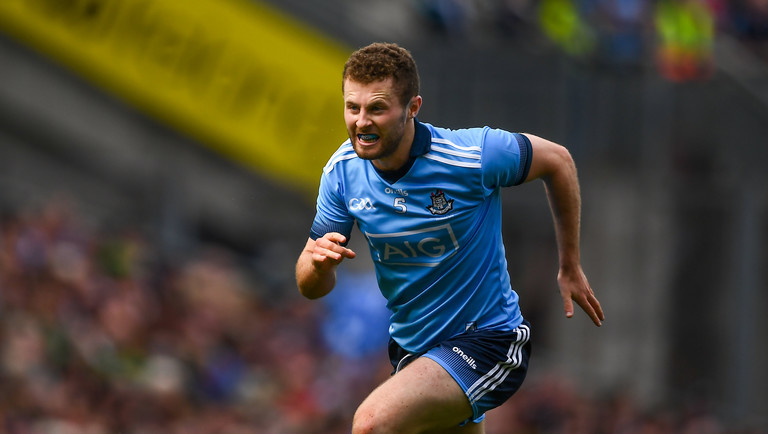 Getting in ahead of Mick Deegan, Pat O'Neill, and Paddy Reilly is the 2015 Footballer of the Year Jack McCaffrey and the Man of the Match in the last two All-Ireland finals. We're not expecting much argument here. 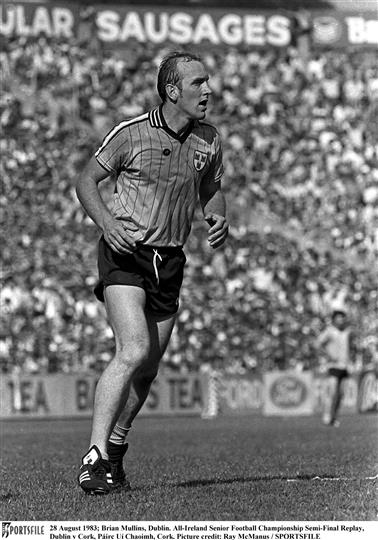 Mullins was peerless in the Dublin midfield for generations. Until his partner in this team... 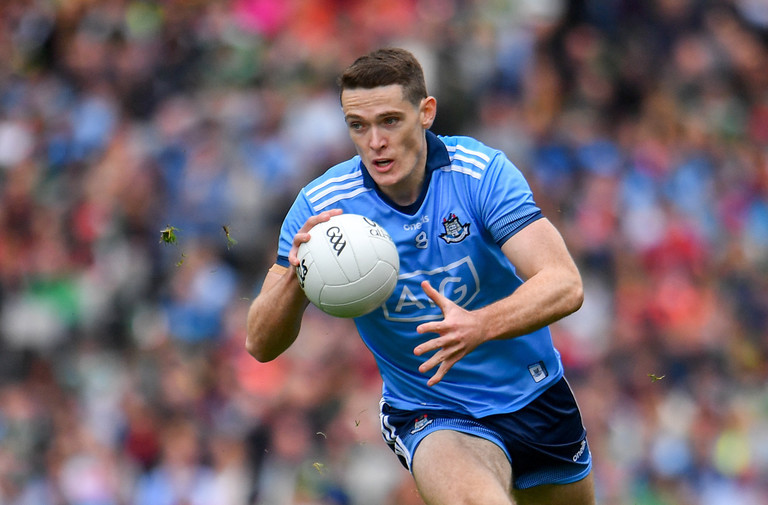 Before Fenton came along, there was big debate here between Ciaran Whelan and Michael Dara McAuley.

Macauley has the six All-Irelands (so far!) while Whelo arrived at a time when the Dubs were about to drift into the wilderness. He was thereafter relied upon to power them back to glory and was their man man in the 16 year drought.

Ultimately though, Fenton has usurped them all. He's never lost a Championship game in his now five seasons with Dublin. Man of the Match in his first All-Ireland final in 2015, the Raheny man has three All-Stars in four years so far and is still improving. 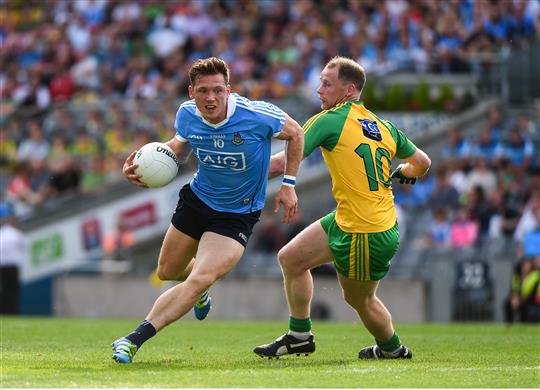 The Dublin forward line has a lot of players of the verge of breaking into this team. Give Con O'Callaghan and Brian Howard another couple of years under their belt... maybe Paul Mannion, Ciaran Kilkenny and Dean Rock should be in there already?

For 10, Anton O'Toole and Dessie Farrell were contenders for spots on the wing but Paul Flynn makes it ahead of the rest. Arguably the key man in Dublin's revolution in the 2010s, he opted to step away this year instead of hanging on for the five-in-a-row. 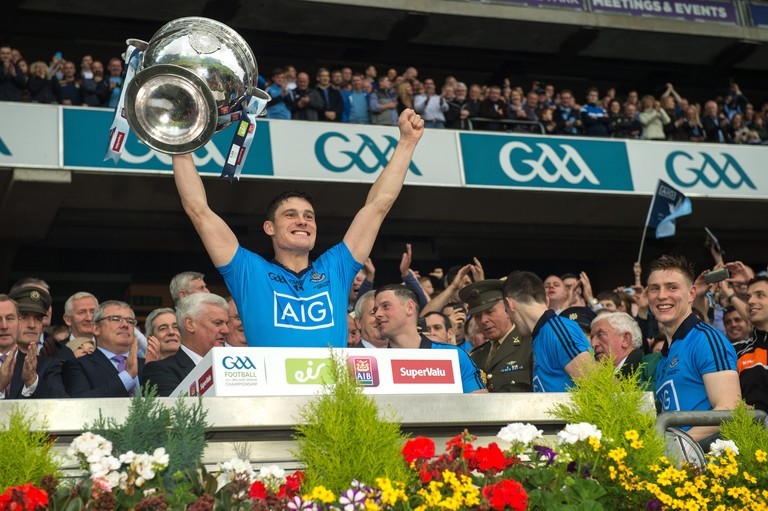 In the same way that Manchester United players almost uniformly answer "Paul Scholes" when asked who is the greatest player they played with, the Dublin team of the current day offer up Connolly to the question "who's the most gifted?"

Tony Hanahoe was one of the most influential figures on the 70s team but Connolly takes it in pure talent. 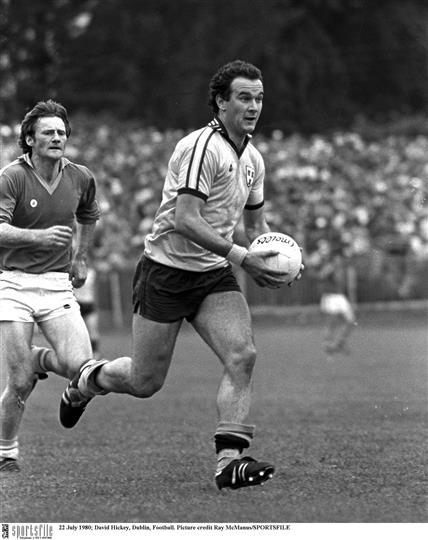 In a Sunday Independent profile a couple of years ago, Paul Kimmage asked Hickey if his son had much time for his father as a footballer.

"Oh he has me right up there with Dermo, and no better accolade can a man get", he responded.

Hickey was one of the most charismatic players on the team, though from a distance was hard to distinguish from half-forward line comrade Tony Hanahoe.

Argued that neither Kevin Moran or Pat O'Neill could pass the ball and thus he saw his and Anton O'Toole's primary role as "laundering that raw product and turning it into usable currency for Jimmy (Keaveney) who liked it hitting the blue (gestures to chest)." 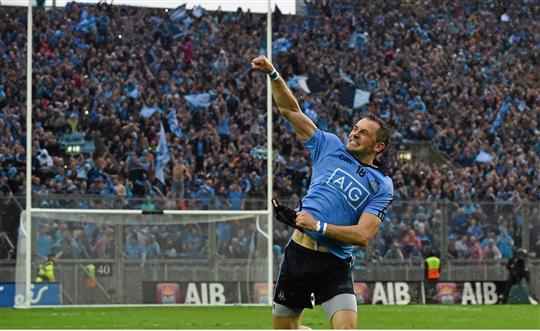 Won Footballer of the Year in 2011 from the centre forward spot but in an effort to ensure he breaks into the team, as is proper, we have thrown him in the corner, where he broke through in the crazy days of Dubs mania and arseboxing in the early 2000s.

The likes of Charlie Redmond, Barney and Dean Rock, John McCarthy, and Ciaran Kilkenny are unlucky here while Paul Mannion is probably a big All-Ireland final away. 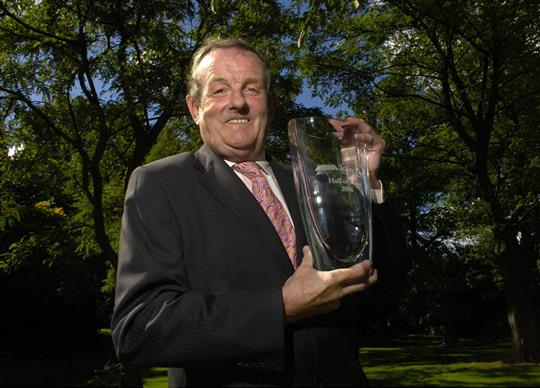 Jimmy is the free-taker on this team, pipping the likes of Charlie Redmond and the Rocks, also unerring from the dead ball.

But Jimmy was magic at clipping balls off the turf and floating them between the sticks. His lack of mobility was something of an affectionate joke, but he was also deadly from open play. He blasted 2-6 in the 1977 All-Ireland final against Armagh, then a record haul.

Had already given up in frustration before 1973, Heffo dragged him out of self-imposed exile from '74 on. A stroke of genius. 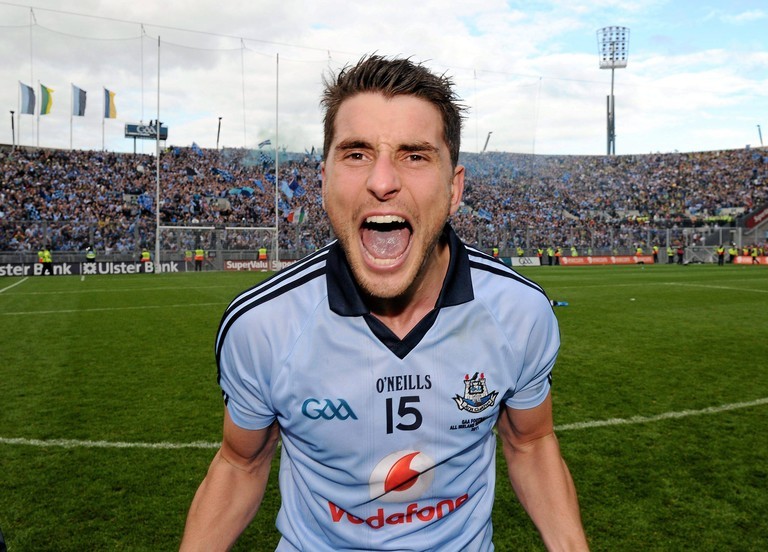 Dublin's most reliable scoring threat for this last decade of plenty. Brogan has won Footballer of the Year and picked up six All-Ireland titles, winning the Man of the Match in one of them.