The Best Kerry XV Of The Television Era

After picking the greatest Dublin team of the television era yesterday, it's time to move onto Kerry. We're sticking rigidly with the colour television era.

1975 is a good starting point for this team, kickstarting, as it did, a glorious time for Kerry football. Inevitably, some true greats were going to be sat on the bench here. 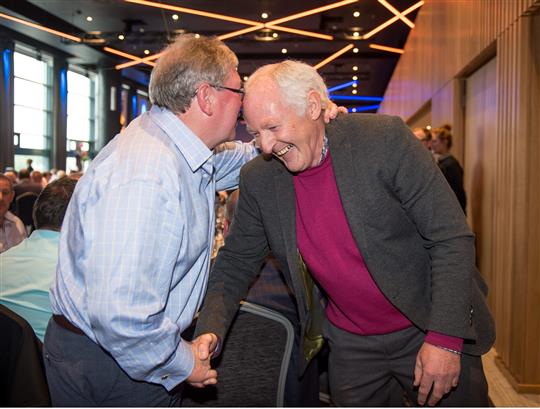 Inherited the jersey from Paudie O'Mahony from 1976 onwards. He won seven All-Irelands, eventually retiring after the 1991 All-Ireland semi-final loss to Down. 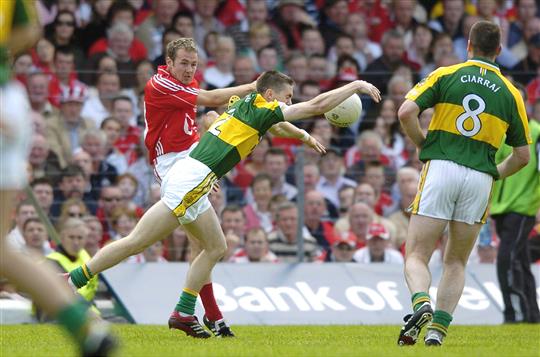 Eeks out the grizzled veterans of the 70s and 80s, Jimmy Deenihan and Mick Spillane to the corner back slot. 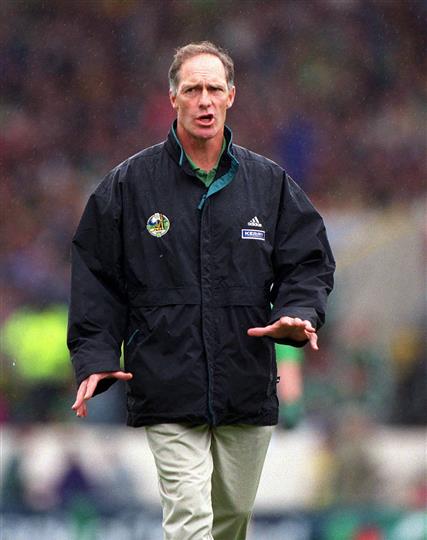 To accommodate Tim Kennelly, we briefly considered moving Seamus Moynihan into the full back slot at John O's expense.

O'Keeffe predated the bulk of the golden era players, having been around for the 1970 All-Ireland victory, when O'Dwyer was still a player. 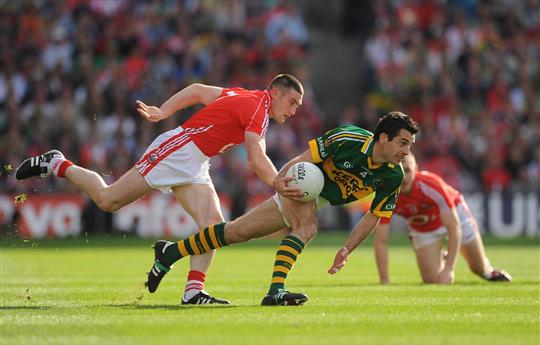 Jack O'Connor's portrayal of Tom O'Sullivan as a laid-back messer gave us one of the more entertaining elements of the Keys to the Kingdom.

Won five All-Irelands with Kerry during the noughties. He overcame the natural disability of his position to win the Man of the Match award for the 2009 All-Ireland final. 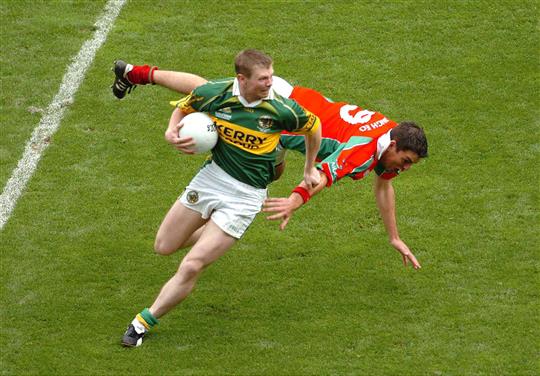 Another Ó Sé you couldn't leave out. Undoubtedly, one of the finest wing backs of all time. Footballer of the Year winner in 2004. Nailed on selection. 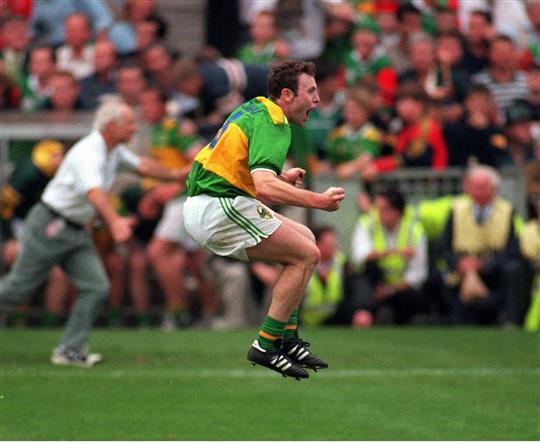 As noted above, we toyed with shifting Moynihan back to the full back line and sticking Tim Kennelly in at No. 6. Moynihan's inclusion on this team, however, was non-negotiable. One of the most admired footballers in Kerry football history. Won Footballer of the Year in 2000. 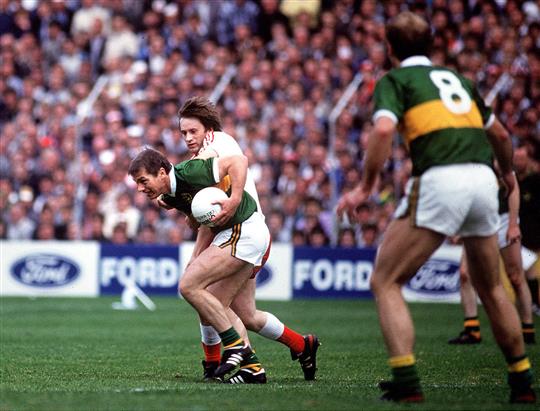 Like Maurice Fitz, Páidí is a great romantic hero of Kerry football. Won eight titles and kept playing until 1989. On his death, the phrase 'larger than life' was used in spades. 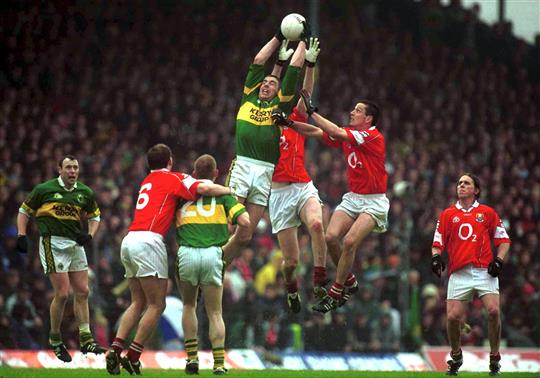 The most decorated Kerry footballer since the end of the O'Dwyer era. The only man to rack up six, a tally built up between the years 1997 and 2009. As Fitzgerald said on the Irish Times, Ó Sé liked nothing better than when the ball came screaming out in the sky. Particularly effective at plucking balls from under the crossbar 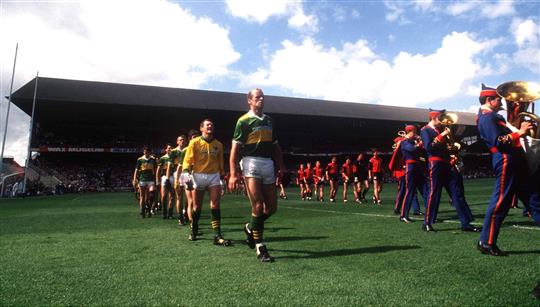 The late Weeshie Fogarty preferred Sean Walsh to Jacko in his very 1950s-heavy 'classiest, stylish Kerry XV'. We don't argue with Weeshie at all but we bow to O'Shea's reputation and place in this company. Regarded by so many people as one of the greatest footballers of all. 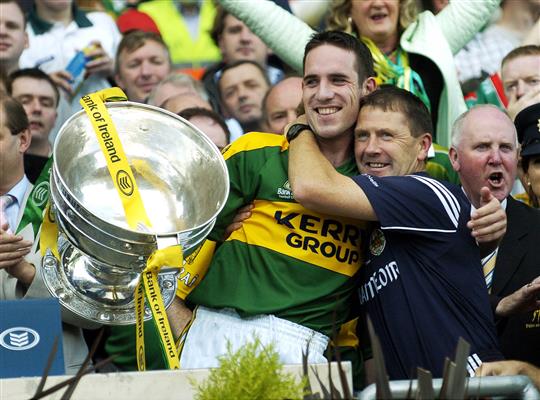 Typically a centre forward, we have shifted him out to wing forward. Jack O'Connor was especially fond of O'Sullivan. That they were clubmates is only part of the story. O'Sullivan was patently one of the most gifted Kerry forwards of the noughties. He pips Ger Power and Paul Galvin for a place in the team. 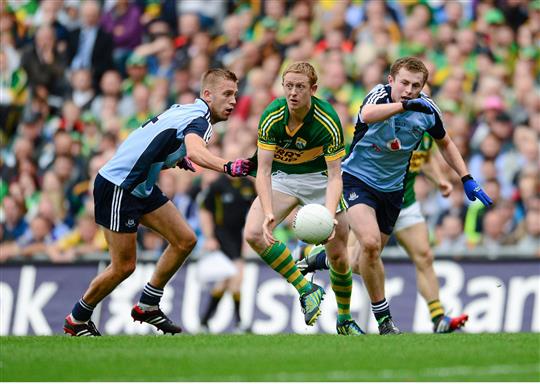 Denis Ogie Moran may have scored a point from a 50 into the wind for the Kerry minors. And won eight All-Irelands too.

But we liked what we saw from Cooper in the centre forward spot in the 2013 season. He dazzled and delighted in the first half of that glorious semi-final against Dublin.

Plus the competition in the inside forwards is intense. 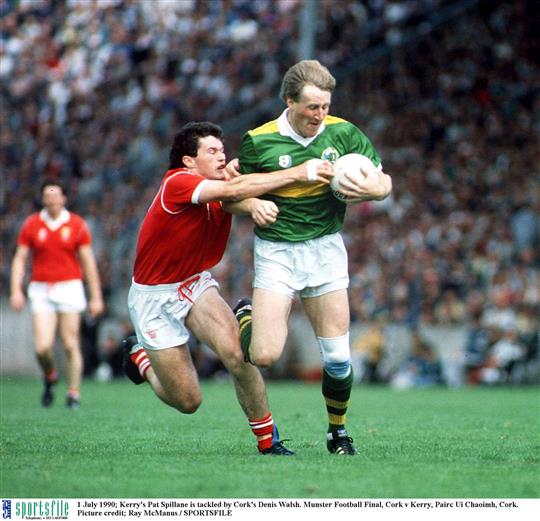 Another player whose place is assured. A fixture on all such 'best of' teams including the Team of the Millennium, Spillane has a good claim to being the most influential player on the  golden era team.

Even in his twilight years, when he took the field sporting a rather oppressive looking knee bandage, he was still usually the best player on the team.

Even in his last ever championship match in the 1991 All-Ireland semi-final loss to Down, he still stands out as one of the best Kerry player on show. 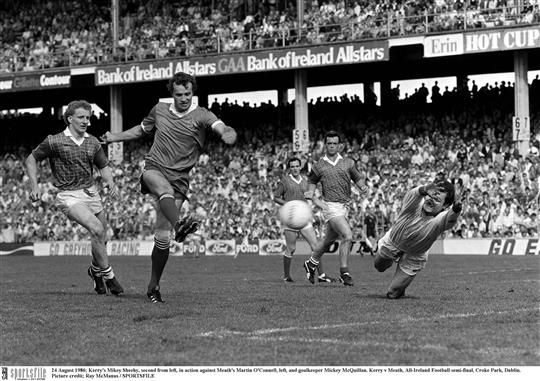 Competition in the full forward line is ferocious. Necessarily, some all-time greats have to be left out. There's no spot for John Egan.

We have to find room for one of the most stylish, elegant, unhurried players of the 80s. In an era when football often looked agricultural, Sheehy looks like a modern ball player.

You only need watch Sheehy play for five seconds to know this was a player who knew what he was doing. 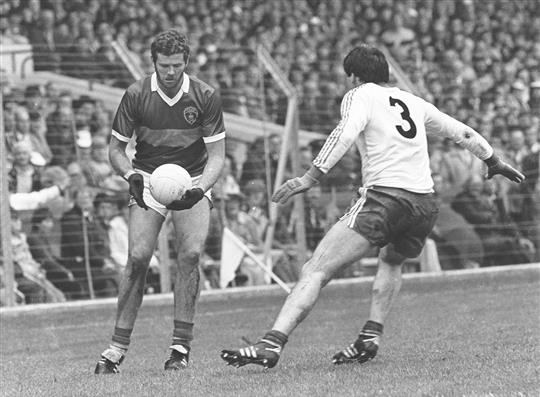 We tossed and turned over the full forward slot but ultimately, the Bomber wins his place. He destroyed Dublin in 1978, perhaps the most famous of all Kerry's golden era titles, and accumulated seven All-Irelands throughout his career.

His return to the fray in 1993 didn't really work. 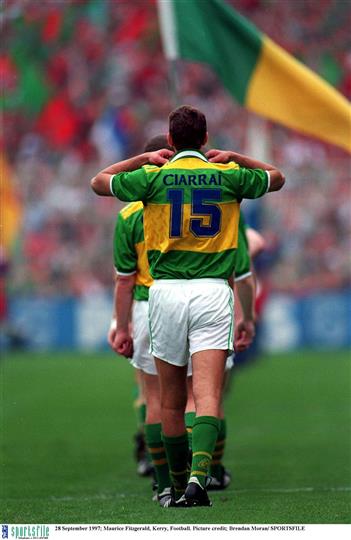 In our Kerry: the lost years article, we suggested that entering the Kerry setup in 1988 was like arriving at a house party when the other guests were either conked out on the sofa or staggering into taxis outside.

That was Maurice's lot. But he stuck around to win titles in 1997 and 2000. If anything, his misfortune in this regard has increased his legend. The 1997 final is now effectively named after him (the game was so dreary otherwise, in truth). None of the golden era have a final named after them.

Now, few bother with the number of medals he won. All they talk about is the moments.

SEE ALSO: The Best Dublin XV Of The Television Era