Six Of The Best Club GAA Commentary Moments Of The Year

The Kilkenny Junior Hurling League game between Windgap and Tullogher-Rosbercon had accompanying audio akin to the all-time great club game commentary: Effin Eddie Moroney's narration of the 1991 Tipperary U21 A football final between Aherlow and Eire Óg Nenagh.

A little over 10 minutes into the second half of August's game, a high ball from the Tullogher half-back line towards Walter Walsh caused havoc in the Windgap defence.

Though they were down to 14 players after a red card in the first half, Windgap were leading. The commentator - the game was streamed on the Windgap Kilkenny Facebook Page - wanted his side to ensure they maintained that lead.

The referee did appear to gesture that Davey Doyle was sent off for a high tackle on Walsh rather than just simply dragging taking him down.

'Mary's at home milking the cows'

Bride Rovers beat Ballymartle in their opening game of the Cork Senior A Hurling Championship at the beginning of August. Commentator John Arnold provided a memorable sign-off for the match.

"I forgot to tell her the the high field is divided and she can't leave them there. I won't be going to the pub because I don't drink but I might go for a bit of grub because the eggs benedict I had this morning are rumbling around."

I tell you one thing is for sure @MartyM_RTE nor @GerCanning_RTE never signed off from a match like this! 🐄🍳😂
Grest start to the season for @BrideRoversGAA & super coverage from Dad & Donal in Balincollig today #BrideRoversAbu #MaryIsMilkingTheCows pic.twitter.com/mkeJHqLbSB

'The man with just one kidney'

Four minutes into Lismore's Waterford SHC quarter-final against Abbeyside, Oisín O'Gorman hit the net for his first score. It was a game in which he his 1-5 in total.

'Pop by name, Pop by nature'

Blarney pulled off an incredible comeback victory in their Cork Premier Intermediate Hurling Championship quarter-final against Ballincollig in September.

Ballincollig led by 10 points with 20 minutes to play and still held a nine-point advantage with under 10 minutes remaining.

However, Blarney reeled in their neighbours.

They drew level with just under 90 seconds to play through a sensational goal from Patrick Crowley. The man known as 'Pop' fizzed in an incredible long-range strike to draw the game at 3-13 to 1-19.

There was still time for another play. Blarney won the next puck out and the sliotar found its way to Padraig Power who fired over the winning point from close range.

The drama was captured by Blarney with some suitably enthusiastic commentary provided by Dave McCarthy.

The final 90seconds that won us the game tonight! @popcrowleypop had absolutely no right to take the shot on but thank God he did! pic.twitter.com/5vN7kOBVAQ

There were just under 10 minutes to play in the Offaly Senior B football final between Durrow and Gracefield, when, with Durrow leading by five points, the ball fell at the feet of Jack Fogarty after a long ball forward from Gerry Spollen.

Fogarty cut inside but rather than picking up the ball, the number 19 dribbled it past two Gracefield players before rounding goalkeeper Conor Sheedy and striking the ball to the net as he fell to the ground.

"A goal!" declared Faithful TV commentator Brian Gavin, "Well, we might see it in the San Siro or the Aviva Stadium... What a fantastic goal!"

Unconfirmed reports that Jack Fogarty and his agent are jetting off for high-level discussions with @FCBarcelona.

For now, enjoy his goal for @DurrowGAA in yesterday's Offaly Senior B Football Championship final. pic.twitter.com/ieA5a1iO2t

'It’s over to Dunne, the married man'

In the Kildare senior football final between Moorefield and Athy, John Holden provided some insight about the personal life of Daire Dunne.

"It’s Healy who will play it over to Dunne, the married man," said Holden.

"A week ago he was single and he hadn't played in a county final. This week he's married and he has played in one."

"..and it’s over to Dunne, the married man. A week ago he was single and he hadn't played in a county final. This week he's married and he has played in one.." 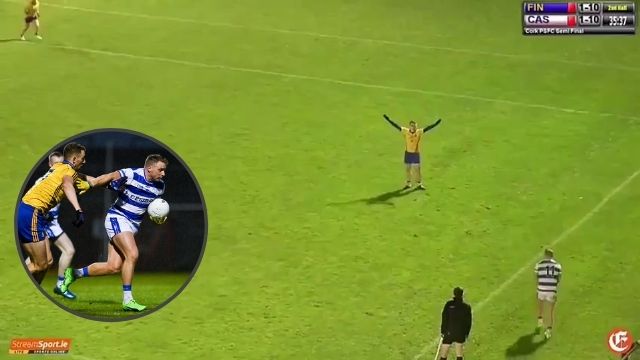