Cork manager Ephie Fitzgerald believes his county have been given the lift they need as they overwhelmed Galway to earn another Lidl NFL Division 1 title.

Having won their first title in 2005 and completing five-in-a-row between 2013 and 2017, Fitzgerald’s side reclaimed their throne.

Substitute Saoirse Noonan scored the crucial goal in a victory that also moved Cork one ahead of Munster rivals Kerry in the roll of honour.

“It’s a big lift for Cork in general,” said Fitzgerald.

“People thought when the older crew went there would be a change in the guard. It’s a league title and we are absolutely thrilled with that.

“Since I have come in there was only nine of the 30 involved so there has been a massive turnover. That is testament to the work being done underage.

“Galway were looking for their first national league title, but the one thing you can never question with our girls is their character. We can certainly play better but we controlled the game in the second-half and after the penalty miss we took over completely.” 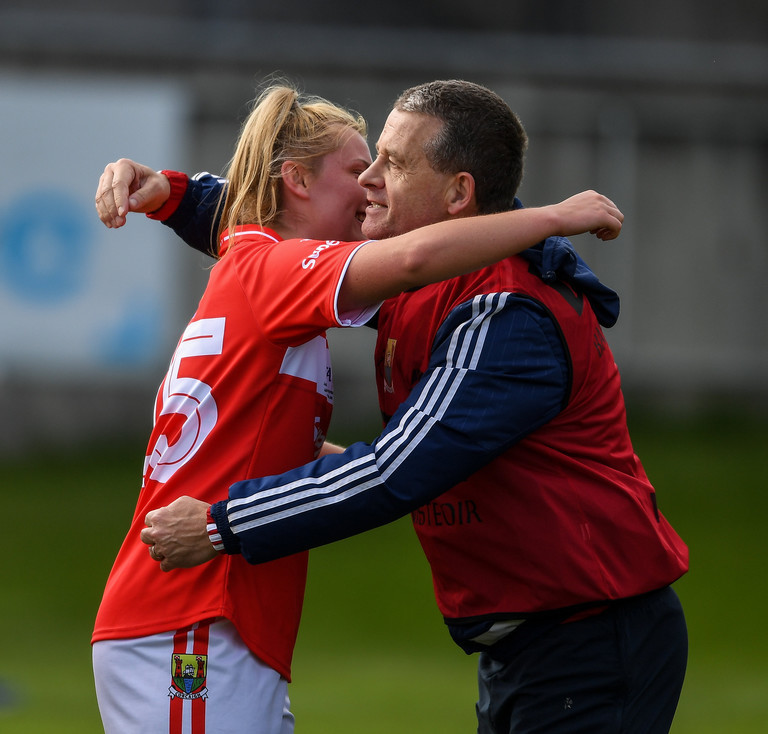 Galway had lost five Division 1 finals coming into this game but beat Cork 1-8 to 0-5 at Mallow in the opening round of this year’s competition.

Nevertheless, this game would go the way of the 2015 decider between the sides, when Cork inflicted more misery on their Connacht opponents.

Mairéad Seoighe and Aishling Hutchings were both yellow carded in a tightly contested first half, but Cork were 0-7 to 0-5 in front at the interval.

But a 0-10 to 0-5 lead soon become 1-10 to 0-5 and there was no way back for Tim Rabbitte’s charges, even after Niamh Cotter and Ciara O’Sullivan both were awarded yellow cards.

Charlotte Cooney and Louise Ward fired goals in the closing stages, but Sinéad Burke was sent to the sin-bin as Galway finished runners-up once again.

“We didn’t shy away from the responsibility that we had today to perform,” said Rabbitte.

“We couldn’t say that we did perform and I am disappointed for the girls because I know how hard they have worked for it.

“We will lick our wounds for a couple of days but we will back at it very soon. We have a Connacht championship to prepare for.

“This was only another step in the journey.”

GAA
3 weeks ago
By Declan Rooney
'It’s Terribly Sad What’s Going On In Mayo. There Are A Lot Of Power Battles'
5

GAA
1 month ago
By Michael McCarthy
Watch "Live": Galway Vs Waterford In The 2017 All-Ireland Hurling Final
1

GAA
3 weeks ago
By Declan Rooney
'It’s Terribly Sad What’s Going On In Mayo. There Are A Lot Of Power Battles'
GAA
1 month ago
By Michael McCarthy
Watch "Live": Galway Vs Waterford In The 2017 All-Ireland Hurling Final
GAA
1 month ago
By PJ Browne
Quiz: Name The Kerry 2000 All-Ireland-Winning Team
Popular on Balls
GAA
11 hours ago
By Gary Connaughton
Confirmed: We Now Have An Official Date For The GAA's Return
11