Big Wins For Donegal And Galway In Opening League Round

Home defeats for both of last year’s All-Ireland finalists in the opening round of the Lidl NFL sent shockwaves through the competition, and Dublin boss Mick Bohan admitted he was disappointed with his side’s defeat to Donegal.

Cork too were trumped on their own patch with Galway taking their scalp, while in Sunday’s action Mayo and Westmeath were impressive winners over Tipperary and Monaghan respectively, in an exciting first round of national league action.

A 1-4 haul from Karen Guthrie gave Donegal the bright start their season needed, but Bohan called for better from his side.

“We are disappointed with the display. We just didn’t have our usual cohesion. We don’t enjoy losing,” said Bohan.

But I’d be more disappointed by the way we played. The way we went after the game rather than the result. If we had lost the game but we had gone after it with the right approach, I’d probably feel a bit better about it.

A lot of new girls got to play in Croke Park. And when you have several new players coming in at once, it’s not that easy to find your feet. But that is what we are trying to do at this time of the year.

With eight survivors from their All-Ireland winning side from September, Dublin side got off the mark thanks to Niamh McEvoy, but when Guthrie goaled after five minutes Donegal took charge and worked their way into a 1-5 to 0-1 interval lead.

Nicole Owens landed a couple of points to settled Dublin after the break, but three in a row from Geraldine McLaughlin saw Donegal pull clear and they eventually ran out deserving four-point winners.

Cork manager Ephie Fitzgerald is also on the look out for more from his players after they lost out by 1-8 to 0-5 to Galway in Mallow.

“I wasn’t a bit happy with our work-rate today, I just told the girls we have standards we expect and we didn’t live up to them,” said Fitzgerald.

“In the first-half I thought we didn’t work hard enough or move it quickly enough. We have a lot of work to do and we will get on with it over the coming weeks.”

New Galway manager Tim Rabbitte was thrilled with his side’s performance after they built on a 1-4 to 0-2 interval lead to claim the win.

“The girls worked really hard and put in a huge effort, so we’re delighted to be travelling home with the points in the bag,” said Rabbitte.

We came down to compete, and fight and scrap for every ball and it’s a great start to the league for us.

A 1-6 haul from full-forward Rachel Kearns put Mayo on the road to victory over Tipperary at Swinford Amenity Park, while Grace Kelly also hit the net for Peter Leahy’s side in the space of four first-half minutes.

Kearns was inspirational for the westerners and helped them into a 2-9 to 0-4 interval lead, but on their introduction to the top flight Tipp launched a spirited comeback in the second period. 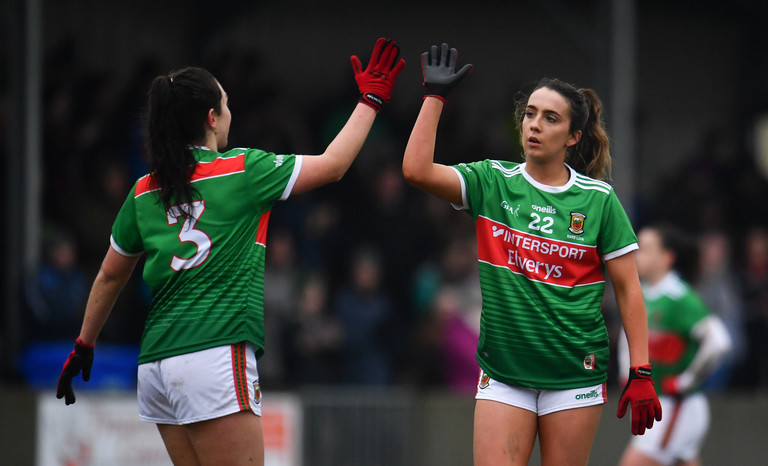 The home side were pinned back for long periods but broke out to land points from Kearns and Roisin Durkin before the end to seal the three points for Peter Leahy’s side.

Meanwhile, Westmeath, under new manager Sean Finnegan, got their season off to the perfect start as Leanne Slevin landed five points in a well merited ten-point win against an out of sorts Monaghan.

Leading by 1-10 to 0-4 at the half thanks to Lucy McCartan’s goal, this game was almost done and dusted at the break and despite some stout resistance by the Farney girls after the interval, Westmeath cruised to the win.

“The girls worked so hard,” said Finnegan. “They are young but eager and have been a joy to train so far.

“They and are doing everything we ask of them which is what we want and they play for one another which is lovely to see.”

In Division 2, Waterford won the South-East derby against Wexford on the Gold Coast by 0-12 to 0-3.

On Saturday, captain for the day Maria Delahunty landed four points and the game was also notable for Michelle Ryan’s inclusion in the Waterford side, for an incredible 19th season.

On Sunday, there was a big win for Armagh over Laois, while a late Kerry comeback earned them a draw against Clare, and Tyrone pulled off a similar escape to draw with Cavan.

In Division 3 on Saturday, Kildare and Roscommon got their campaigns off to winning starts before Down fired six goals past Offaly to take the win on Sunday. Saturday’s Sligo v Meath fixture was postponed until the weekend of February 16/17 due to a frozen pitch.

Meanwhile, in Division 4, there were wins for Limerick and Carlow, while the Antrim v Leitrim fixture was postponed until the weekend of February 16/17 due to a bereavement in the Leitrim camp, and the Fermanagh v Derry game fell foul to the weather.

GAA
4 months ago
By Declan Rooney
'It Was In Primary School That We Learned English. We Had None Until We Were About Five.'
GAA
1 year ago
By Michael Gallagher
Galway And Mayo Battle To Draw In Thriller Connacht Final
1

GAA
4 months ago
By Declan Rooney
'It Was In Primary School That We Learned English. We Had None Until We Were About Five.'
GAA
1 year ago
By Michael Gallagher
Galway And Mayo Battle To Draw In Thriller Connacht Final
GAA
1 year ago
By Maurice Brosnan
'I Felt We Were In A Bad Place In Mayo And I Was Concerned About Leaving Really'
Popular on Balls
Football
22 hours ago
By Gary Connaughton
Stephen Kenny Gives Selection Hints About Fringe Members Of Irish Squad
3