In 2013, Jim Gavin took the reigns of the Dublin men's team from Pat Gilroy. It wasn't an enviable task. Gilroy had ended Dublin's 16 year wait for Sam Maguire in 2011, before falling at the semi-final hurdle in 2012. Gavin took over and won the All-Ireland in his first year. By the time he departed in 2019, he had won six All-Ireland titles in seven years. And yet not even Jim Gavin managed what Mick Bohan has done.

In 2014, Gavin's second year in charge, Donegal emerged from the long grass to give Gavin his only ever championship defeat as Dublin manager. Mick Bohan has yet to be defeated in his current run as Dublin Ladies' Football manager. He's led his team through 21 Championship games since 2016. Dublin have won all 21.

Dublin won an All-Ireland title in 2010, but did not even make a semi-final for the next three years. From 2014 to 2016, they agonisingly lost three All-Ireland finals in a row to Cork. Bohan took over in 2016 after the third defeat. He was taking over a team of heartbroken players. When you lose three finals, where do you go from there? Is it possible to overcome such trauma as a sports team?

Dublin haven't lost a game since, and completed the four-in-a-row on Sunday.

It's Bohan's second stint as Dublin boss, having also managed them in the noughties. He's also worked with Dublin and Clare men's teams.

It's a long way to go to match Cork's ridiculous 11 All-Irelands in 12 years, but Dublin are well on their way. It was fascinating to see if they can extend the run. With a rejuvenated Cork team on the rise again, as well as the likes of Galway, Mayo, Armagh and more not that far off, there's plenty of competition. Right now though, it's clear that Bohan's women are setting a standard that's very hard met.

SEE ALSO: 'To Wrestle That Back Off Them, That Was Hugely Pleasing' 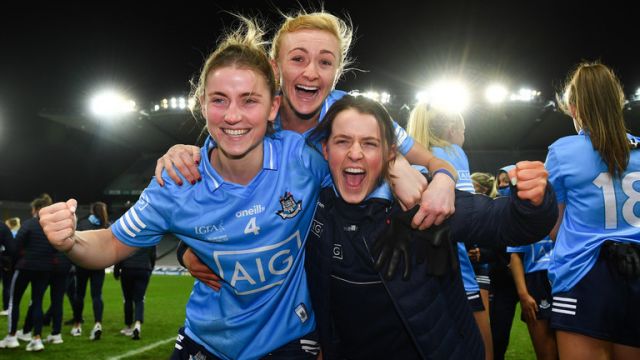 GAA
4 months ago
By Declan Rooney
'To Wrestle That Back Off Them, That Was Hugely Pleasing'
GAA
4 months ago
By Conor McKenna
Dublin Come From Behind To Seal Four-In-A-Row After Cork Victory
GAA
10 months ago
By Michael McCarthy
Dublin's Siobhan Killeen's Horrible Battle With Covid Is A Stark Warning To Us All
Previous Next