From War-Torn Liberia To Westmeath: The Remarkable Story Of Boidu Sayeh

14 years ago, Boidu Sayeh hopped on a plane and headed for a destination he didn't know existed. On his eighth birthday, he landed in Ireland, leaving behind war-torn Liberia. His life up until then had been in Monrovia, his new one would be in Moate.

For a young kid in Liberia, the only foreign land on his map was America - that's where he thought he was headed.

"I hadn't a clue, I hadn't a notion," the Africa Day champion told Balls.

"When you're growing up in Africa, the only country you really hear of is America. It's the only place everyone knows and is mad about.

"I thought I was going to the States. I was delighted, I was like, 'Oh my God, I'm going to America. It'll be great, I'll start playing soccer and all that craic.

"When I arrived, it was the only time I knew that I was coming to Ireland."

Though he had been adopted by relatives - his father's brother Ben and his wife Therese, the woman he now calls his mother - they were essentially strangers; he had never met them before setting foot on Irish soil.

Ben had approached Boidu's father, proposing that he raise his son. An education and a better life awaited in Ireland. His uncle had been in Ireland since the mid-90s when he and his wife, a Westmeath woman who had worked as a nurse in Liberia, had escaped the country during the first Civil War.

The death of Boidu's mother when he was five or six led to him bouncing between his siblings as war raged. It's a conflict of which he has little memory. Sheltered by his brothers and sisters, never allowed to remain in one spot for too long, he avoided the bloodshed.

Research has helped tune in a distorted picture of what happened in his native country. The 22-year-old is aware that child soldiers were used by both sides in the war and is grateful not to have been one of them. A trip to Liberia eight years ago gave him HD clarity of how the war impacted his family.

I went to stay with my sister for about a week when I was over there. The conditions are so poor: there was no proper running water, a proper stove to cook on, there was no anything really. It's literally you have to make your own way for everything.

When I was younger we used to have a house to stay in. When I went back there was nothing there but shanty towns and tin houses and all that craic. That's when you realise the war really did mess up everything.

Boidu can vividly remember his first day in Ireland. Therese picked him up from the airport and brought him straight to his aunt's house.

"A few of my Aunties were there - it was my first time seeing a whole group of white people together. I kind of walked into a room and was introduced to an auntie and an uncle, another auntie and it was a very overwhelming experience. I could understand them but I just didn't know what was going on."

He went to Rosemount Primary School. It was there that he first played Gaelic football. Second class and a coach named Jim was the launching point for a GAA career which has reached senior inter-county level.

Growing up in Liberia, all Boidu had known was soccer.

"When people started kicking around the ball, using their hands and picking the ball up with their feet and hand passing the ball, it was completely new to me. It was crazy, I just thought people were crazy.

"All the kids knew how to play Gaelic already and I had to start from scratch."

An alien concept GAA may have been but the fish out of water learned to breathe. Rosemount GAA club was his pond, Westmeath became his lake.  By his early teens, Boidu was on Westmeath underage panels. He progressed through the ranks all the way to under-21.

In 2013, he played on the Westmeath team which reached the Leinster minor final, losing to Kildare. That day, Boidu - a corner-back - lined out with fellow Liberian, Israel Ilunga, in the fullback line. 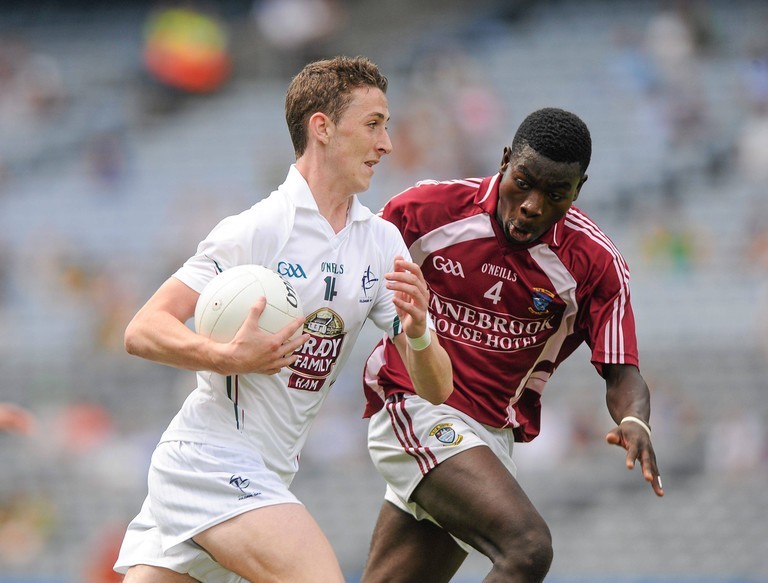 "It wasn't strange because I always played with Izzy. I played with him from under-16s all the way up so it didn't feel like I was on my own. Then there was another guy there as well, Sam Omokuro.

"Those boys stopped playing and I'm the only one with the seniors at the moment. All the way growing up, it didn't feel like I was the only black guy playing on the team."

Landmark days have come over the past 12 months in Boidu's GAA career. Last year, he made his Championship debut, coming off the bench against Offaly at Cusack Park; his league bow came this year.

"It started off, 'Jeez, I'd never make it that far' but once you get into the last year at U21, it's like, 'It's not that far, I could definitely play with these boys'. They're good but I'm just as good as them.

During a game against Meath when he and Illunga were both minors, Boidu's best friend was the victim of racial abuse. A Meath player made a monkey gesture towards Ilunga and he reacted. A card red - which would be later overturned - resulted.

Boidu has never experienced such treatment, either on the pitch or off it. Though, he knows that if a racist remark was thrown his way, his teammates - at both club and county level - would not tolerate it.

The fact that there's a good few black players playing, people are used to it at this stage. People would know me long enough that they'd know there's no point in being racially abusive.

People would fight with you, people would argue with you but luckily, the first thing they say would not be racist.

I've gotten more respect from the fact that I'm black and I'm playing Gaelic than I have anything negative.

GAA has been a social lubricant for Boidu. It helped him integrate into Irish society and build relationships. Many of his strongest friendships found planning permission in the sport.

"Even the community, everyone has more respect for you because you play Gaelic and you're good at Gaelic."

Liberia has changed since Boidu was there in 2010. He witnessed the progress two years ago when he visited at Christmas.

"It's more of a welcoming environment in Liberia. Christmas time over there is lovely.

"There's a lot of people from America moving back into Liberia, trying to build; help out. It's developing a lot better these days."

Changes for the positive there have been but Boidu won't be upping sticks and moving there permanently anytime soon. "I don't think I'd like to move there properly and raise kids. I'd prefer to stay in Ireland and move back when I'm a good bit older, when I'm retired. "

For the moment, Moate is home - as has been Waterford during the week for the past three years. Boidu studied Sport and Recreation at Waterford IT. College work experience at the JG Elite Gym in Athlone turned into a summer job. He's just in the door from work when he takes the call for the interview.

His degree in Waterford complete, he eyes spending his days working in a gym as a path he'd like to take. Opening the door on his own gym is also a thought - it's a road increasingly travelled by GAA players as they seek jobs which will facilitate their sporting careers.

This weekend, Boidu will be in Dublin at the Farmleigh Estate in the Phoenix Park. He'll be running GAA skills sessions as part of Africa Day, hoping to introduce young kids to the game he loves - just like he was more than a decade ago.

"I have little African kids coming over to me and see the Gaelic football and be like, 'I've never played Gaelic before. How do you do this?'

Until it's suggested to him during the interview that he's probably viewed as a role model by those young African kids, the thought had not crossed Boidu's mind - "When I look at it now, I guess I am".

He certainly was to the GAA novice he met last year.

The two kicked around. Boidu told him to join his local club. Another convert.

Africa Day, which falls on 25th May annually, is the official day of the African Union and marks African unity. In Ireland, Africa Day events highlight the scope and benefits of Ireland’s engagement with Africa. All events are supported by Irish Aid. This year’s celebrations include a flagship family day in the grounds of Farmleigh Estate in Dublin’s Phoenix Park on Sunday, 27th May and regional events in Cork, Galway, Meath, Kilkenny, Limerick, Waterford and Wexford.

The flagship event will have three stages of live music, an African Bazaar, a dedicated children’s area, a Dance Zone which will host dancing, drumming and spoken word performances, and a Sports Zone with the GAA and FAI represented. Boidu will run a series of GAA skills sessions throughout the day at Africa Day Dublin. This will be his second year involved.

You can listen to part of the interview with Boidu on this week's So-Called Weaker Podcast.

GAA
11 months ago
By PJ Browne
'I Love Playing Gaelic... To Play For Your County Is A Big Deal'

GAA
11 months ago
By PJ Browne
'I Love Playing Gaelic... To Play For Your County Is A Big Deal'
Popular on Balls
Football
7 hours ago
By Gary Connaughton
Watch: Enda Stevens Scores An Absolute Thunderbastard Against Brighton
1