As Borris-Ileigh's Sean McCormack and Conor Kenny hoisted the O'Neill Cup from the Páirc Uí Rinn stand, there was one rather surprising cameo - a bantam cock. It was the same cock that was seen previously strutting around the pitch, held down by a short piece of baling twine.

It left viewers and spectators unaccustomed to the Borris-Illeigh way rather bemused by the scenes, but it's a tradition ingrained in the club going back through the decades. The cock has always been present within the club's psyche and indeed it takes pride of place on the club crest.

Tradition dictates the club mascot is released onto the pitch during the pre-game parade of every final the North Tipperary club contest, just as it was released in the stand after the club overcame Ballygunnar in today's provincial decider.

The tradition didn't exactly die but a lack of success over the last 30 years meant the club were starved of opportunities to bring their own unique form of fandom to big occasions. The club won their first county title since 1986 this year. 2017 was their first appearance in a county final since 1988. But the good times are back and now so is the cock. 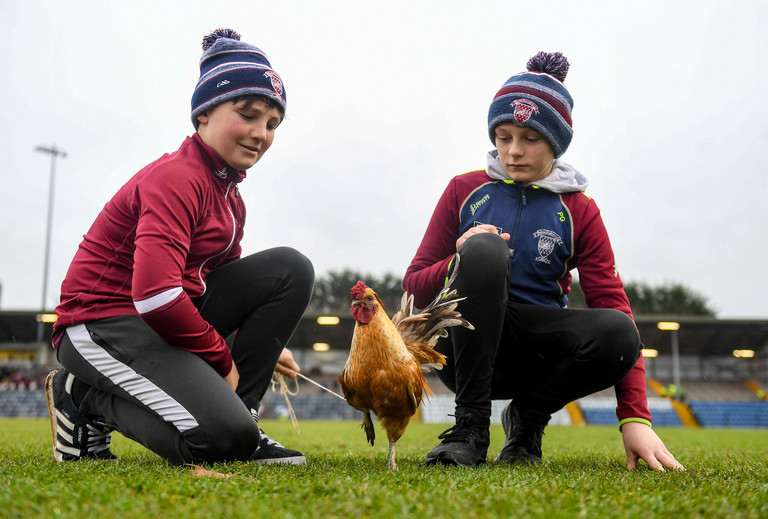 Today, the club became Munster champions for only the second time in their history, the last time being during the campaign which saw them go on to claim All-Ireland glory in 1987.

As was the case back in the heady eighties, the mascot has become a symbol of the parish, earning them a "cock-sure" reputation, a tag locals insist on wearing with pride.

Speaking ahead of this weekend's game Brendan Maher addressed the sense of self-confidence, a quality the cock has come to represent.

Call it whatever you want but it is self-belief. It’s the belief that it’s been done before here so we can do it again.

The club went into today's clash as massive underdogs but, after a long wait, they rule the roost in Munster once again. Expect the cock to make yet another cameo as Borris-Ileigh continue their journey into the All-Ireland semi-finals in the New Year.

SEE ALSO: 'This Is What We Live For' - Brendan Maher Ends Monster Year With Munster Triumph

GAA
1 month ago
By PJ Browne
'The Lads Searched The Sideline, The Stand - They Were Mad To Get It'
GAA
5 months ago
By PJ Browne
Fennelly Remembers Deceased Clubmates As Ballyhale Make History
Podcasts
5 months ago
By Mark Farrelly
The Buildup Podcast: Kevin Doyle, Stephen Ferris & All-Ireland Finals
Popular on Balls
Football
12 hours ago
By Gary Connaughton
AFTV's Reaction To Arsenal Howler Is Everything You Hoped It Would Be
15