Everyone Was Asking The Same Question After The Cody/McGrath Confrontation

After Tipperary humiliated Dublin in the curtain raiser at Thurles, Kilkenny and Waterford did battle for a place in the All-Ireland quarter final on July 23rd.

Midway through a tight first half, Brian Cody and Derek McGrath had, shall we say, a disagreement about a line ball which went the way of the Deise. Cody advanced towards his opposite number, but a linesman stood in his way. Everyone seemed to ask the same question in the aftermath of the incident. 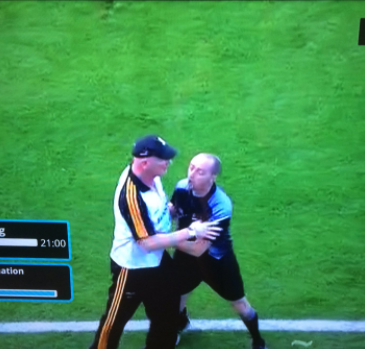 Did Brian Cody just do something similar to the linesman that Diarmuid Connolly did?

Brian Cody puts his hands on the linesman and pushes him back. 12 week ban surely from the line?? #kilkennyvswaterford

In case you've been living under a rock for the last month and a half, Diarmuid Connolly was banned for 12 weeks for pushing a linesman during Dublin's game against Carlow. It caused uproar for fans and pundits alike. Eventually, the CCC upheld the 12 week ban and Connolly is missing for Dublin until the last week of August.

Whether the referee or linesman were made aware of what Cody did is yet to be known. If it goes in the referee's report, expect there to be some fallout. It's sure to be rewound, discussed and analysed to some extent. We could see another major saga this summer.

The Cats were struggling badly at half time and trailed by five points.

GAA
8 months ago
By Maurice Brosnan
There Is Hard Work, And Then There Is What Adrian Mullen Did During Semi-Final Win
10

Quiz
6 hours ago
By Balls Team
Quiz: Name The Famous Ireland Match With Only The Team Photo
6

Snooker
16 hours ago
By Michael McCarthy
Quiz: Can You Name 20 Snooker Players From Their Nickname?