How Dublin Colossus Brian Fenton Became 'A Freak Of Nature'

When Kieran Donaghy sat and reflected on Dublin's second-half bombardment on top of a shell-shocked Mayo in last week's All-Ireland semi-final, there was one man, in particular, he pointed at as integral.

It is just how big and how quick he is. He is a freak of nature. I don't think Darragh O'Se, Jack O'Shea, Brian Mullins all the way back... I don't think any of those fellas would fancy marking him. He is the full package.

At this stage, the story of the Raheny club man's rise has been well told. A midfield maestro who was overlooked as a Dublin minor but developed to become a three-time All-Star and four-time All-Ireland winner. His summer total stands at 3-8 after last Saturday's exploits but beneath the well-trodden turf lies remarkable roots. 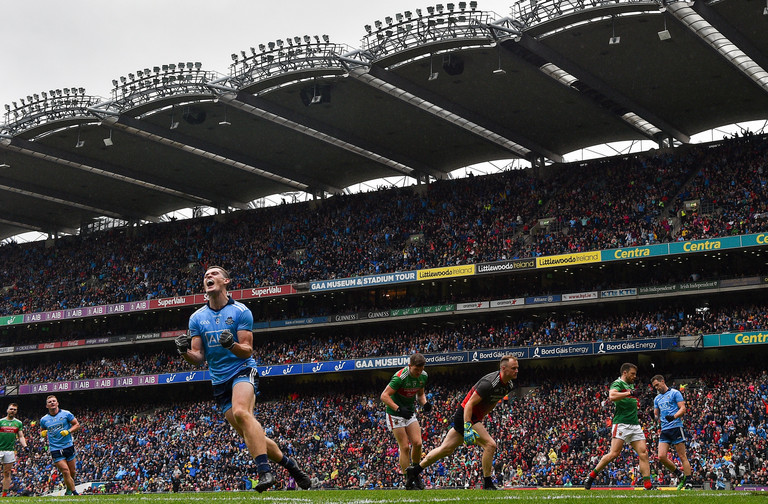 Brian Fenton's contribution to Dublin's third-quarter blitz was obvious. Between the 35.42 minute and the 48.42 minute he had eight possessions, including winning two kick-outs. He also had one huge defensive intervention when he tracked from inside the Mayo '45 to the edge of Dublin's D and pressurised a Paddy Durcan shot which went wide. 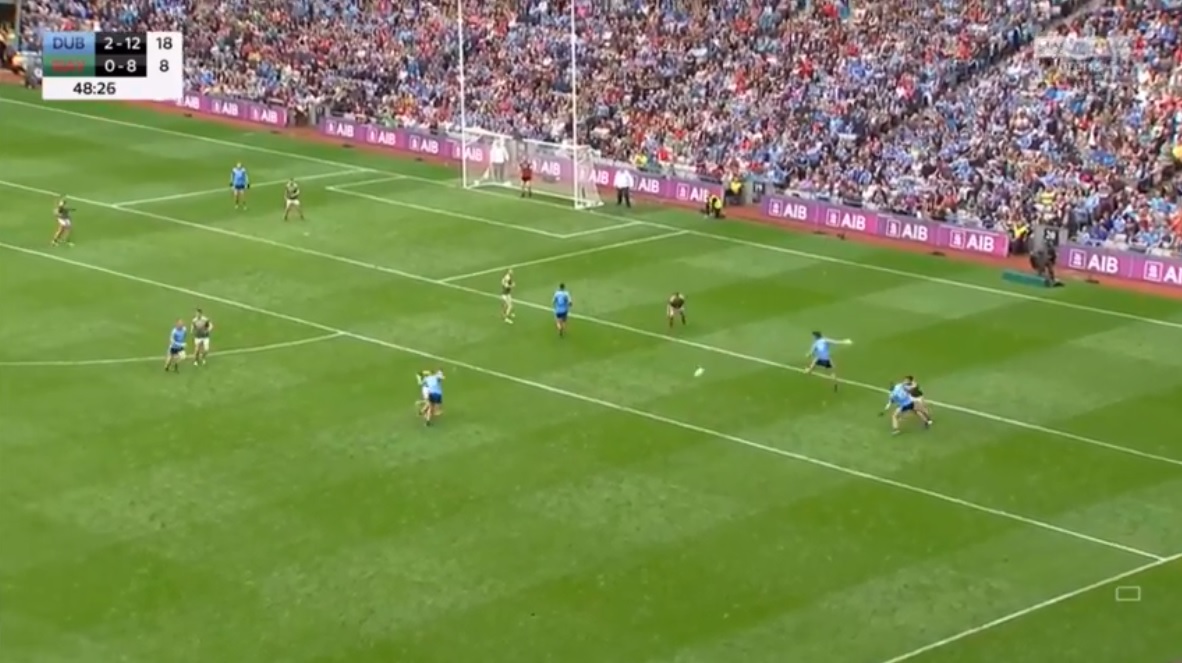 After already completing a 50-yard run in attack, Fenton puts the head down and tracks back. 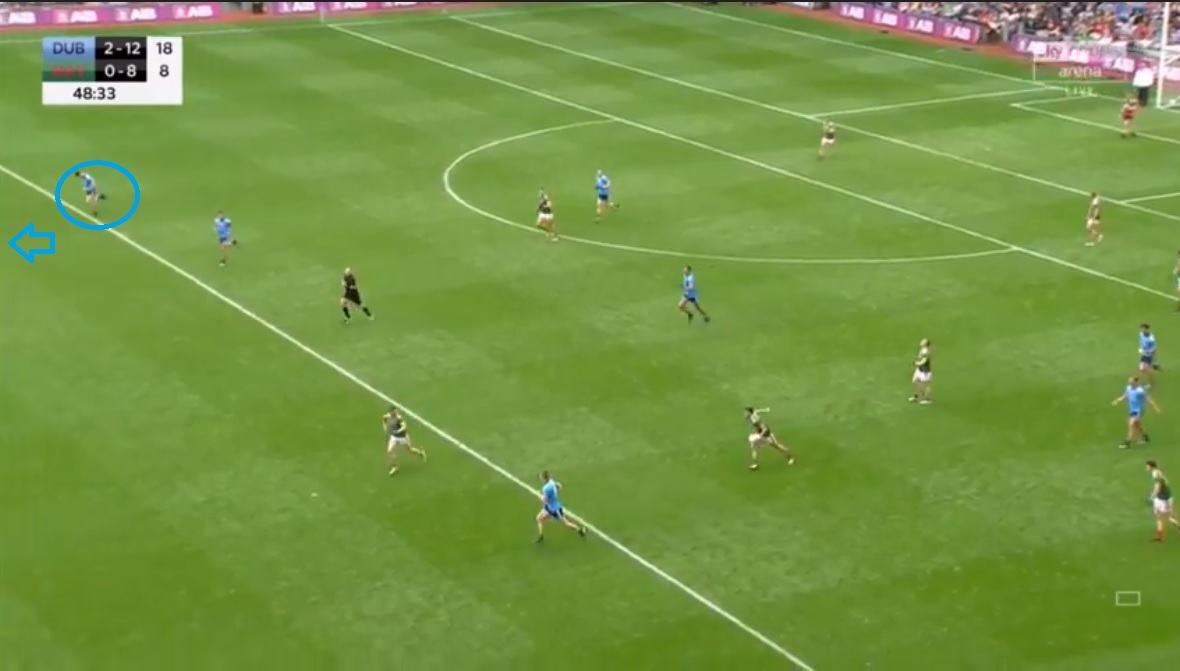 He charts the ball to Durcan and pressurises as the Mayo half-back shoots wide. 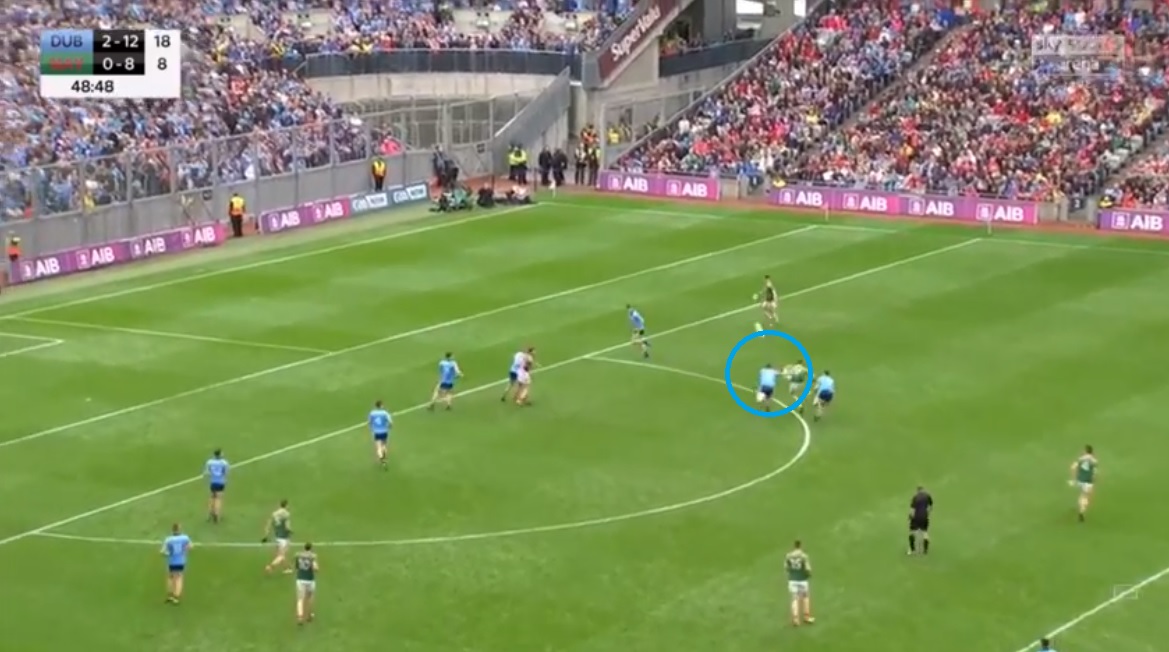 Hard running well-developed by a personal drive. Former Tyrone footballer Sean Cavanagh explained as much on the Sunday Game after the match.

I remember Colm (Cavanagh) saying to me they were in Dubai a few years ago for the All-Stars tour. Dublin had just won the All-Ireland and he mentioned after the first day a couple of them went down to the gym just doing a little bit.

But Fenton was on the runner and going for miles and miles. Properly running, he wasn't there for the look of it.

That is part of Fenton's capacity. A rare marriage of athletic ability and technical proficiency. Consider the fact of those eight prementioned possessions, half ended in an accurate kick-pass. That period doesn't even take into account his goal and point which came soon after. 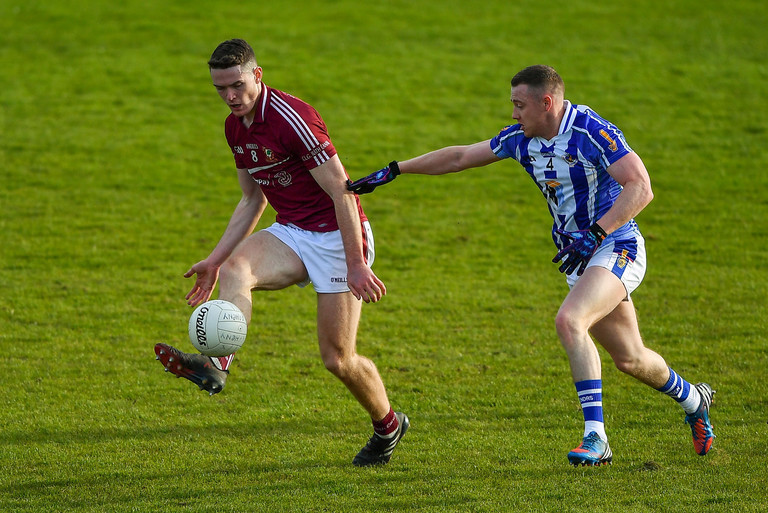 From the age of five until minor grade, four coaches in Raheny GAA had crucial contributions to Fenton's career.

Pat Ivory, Phillip Kane, Paul Dempsey and Christy Reid, who sadly passed away in recent years. Mentors who in their own time upskilled and benefitted from the Level 1 and Level 2 intercounty GAA coaching courses in the early 2000s and used that expertise to help develop a superstar.

Paul Dempsey is now Raheny Senior Football Manager. From a young age, he saw a unique set of influences that would have Fenton in good stead.

1993 was a special year for Dublin football. Seven or eight current Dublin players came through the same development squads at that time, into the All Ireland Minor Final in 2011 and a subsequent All Ireland U21 title followed in 2014.

Brian Fenton was in that 1993 group and the two of the best players in Dublin all the way through from juvenile were Ciaran Kilkenny and Brian. You could see it when they were twelve. Brian was a smaller guy until he took a growth spurt in his late teens.

"His sporting background is huge. His father is from a Kerry GAA family. His mother was involved with the Irish Swimming set-up. He came from a sporting background. His sister was a national swimmer. Growing up you could give him a hurl or a tennis racquet, he was also brilliant at soccer.

"That is true for a lot of Dublin lads. Paul Mannion was a brilliant soccer player. Rugby tried to grab a few of those Dubs along the way. They had that raw material entering the Dublin set-up."

Of particular importance was his mother's influence, Marion, who sadly she passed away in 2012.

"His mother especially was a huge influence. She passed away a few years ago, we used to see her on the sideline for all his juvenile games and she had a huge influence in his drive. It is not just about training on Tuesday and Thursday. It is about lifestyle, work ethic, being a team player. He knew that early on."

This is why criticism of funding can't become a criticism of the current team. There is more to this group and much to be learned. The factors leading to sporting success are not binary and nor should they be treated as such. It risks doing the leaders and chasers a significant disservice.

Even in the midst of that first-half Mayo intense storm, Fenton oozed calm. It has been noted that it is rare to see him dispossessed, which happened twice in the opening 35 minutes. But his real measure is how he reacted to it.

Brian Fenton attacks and carries into contact. He is bottled up and fouls the ball. 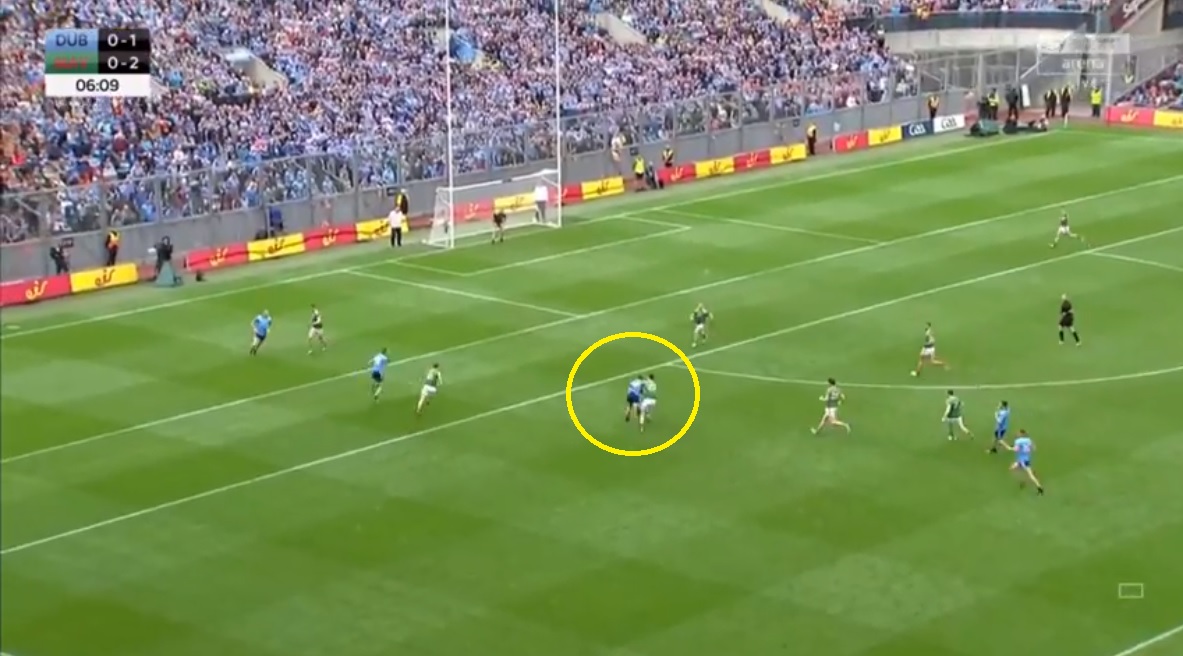 Immediately, he tracks back. 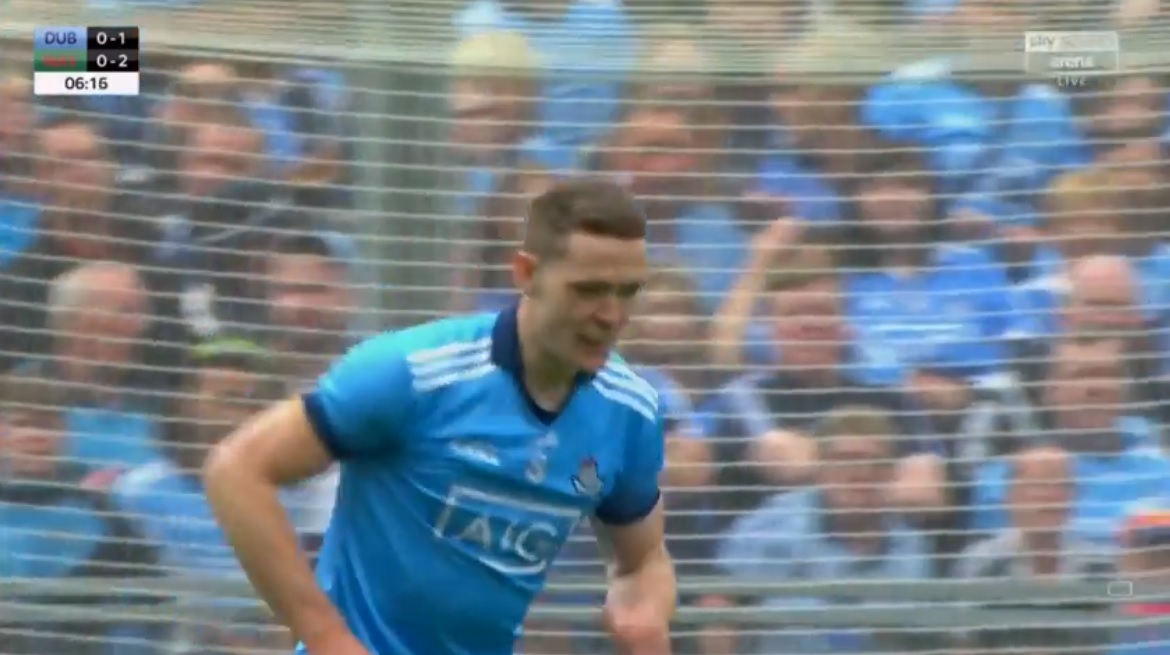 Mayo go on to enjoy over three minutes of uninterrupted possession. Twice Dublin concede a free but never in a scoreable position.

For three minutes, Brian Fenton stalks the ball, not a man. Waiting. 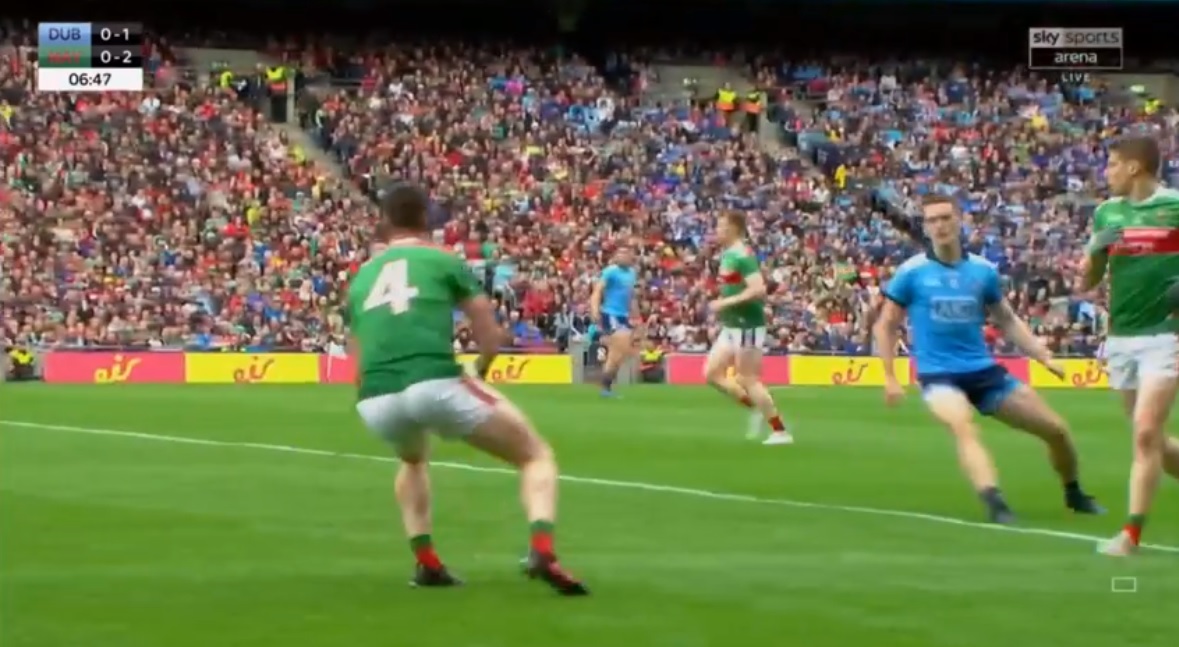 Note Dublin's defensive shape is perfect. In the first half, they might not have been comfortable but they still played on their terms. 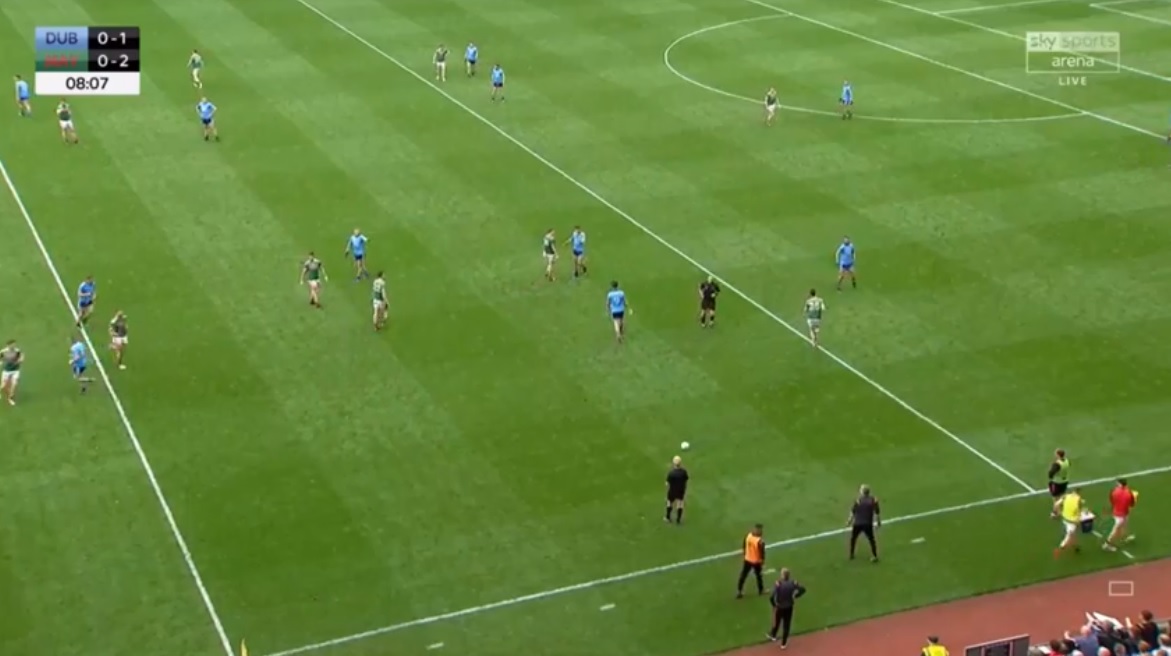 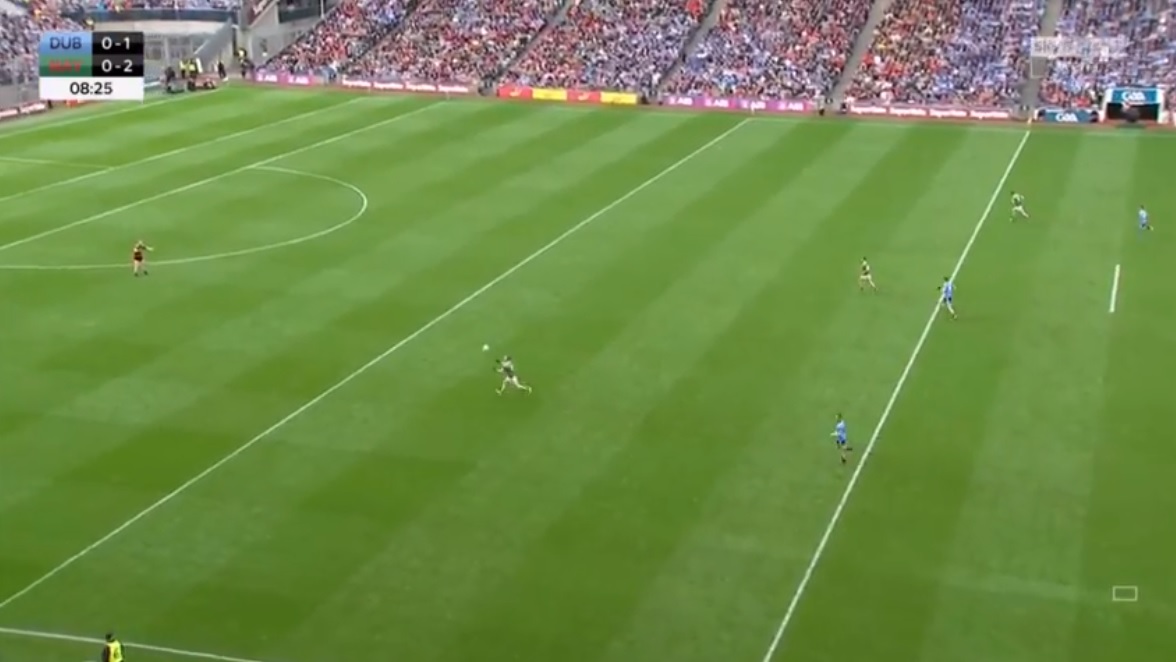 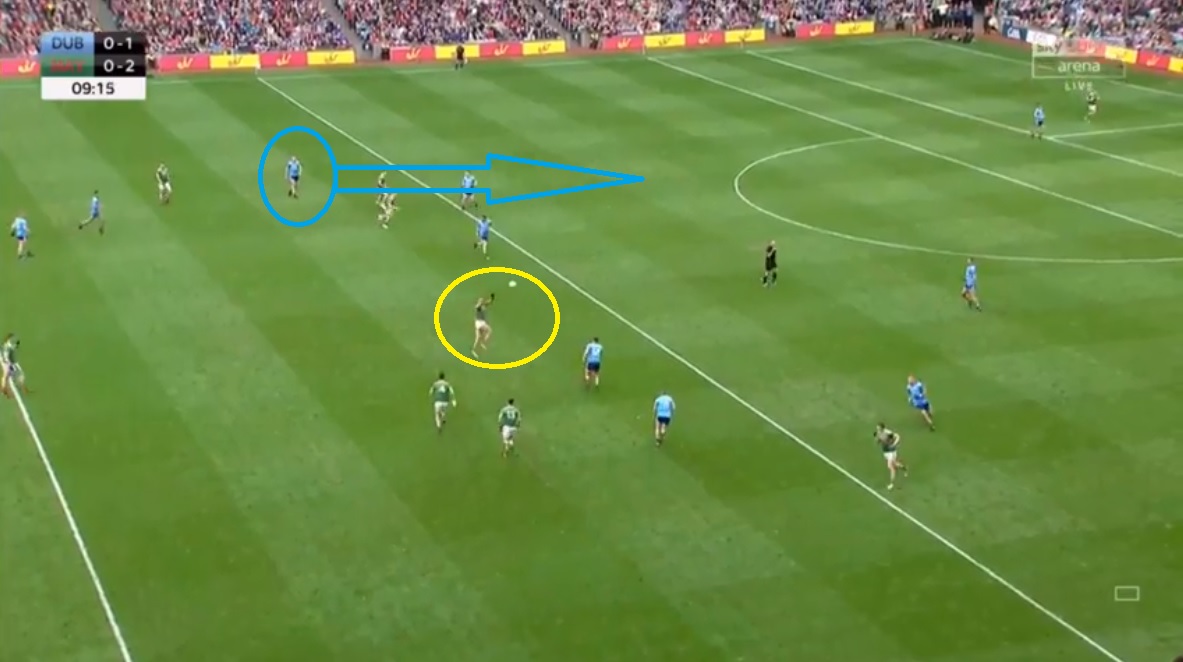 He spots the run and strikes. A firm hand offsets Aidan O'Shea who kicks wide. 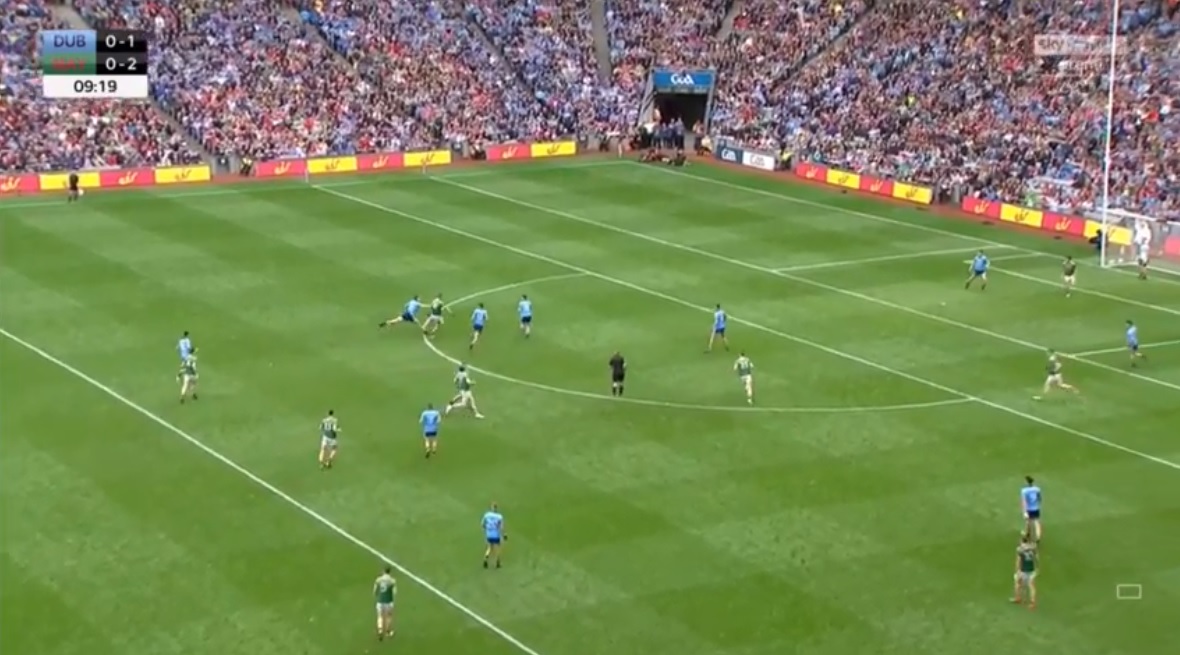 Fenton catches the resulting kick-out on the half-way line, takes the mark and kicks forward which leads to a Dublin score. 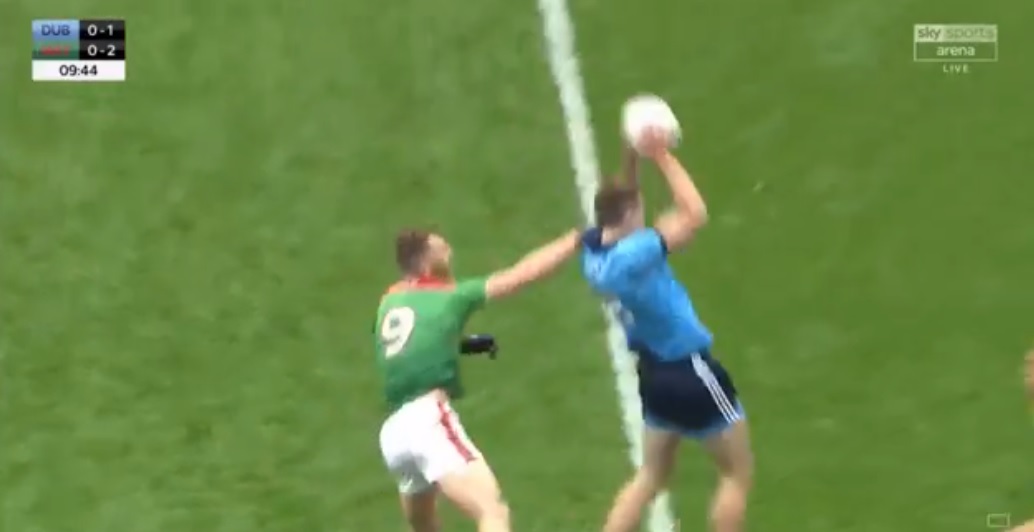 As a club coach, Dempsey knows all about instilling such work ethic. Jim Gavin is the expert.

There is a culture of hard yards. That set-up encourages it. I mean they put in serious, serious hours. Jim Gavin keeps referring to the idea he lays the platform for the lads themselves to take up on. So much of it is driven by themselves, believe it or not. I see it. There is such competition.

In every single aspect, down to the meals they get. It is elite level. If you're in that Dublin set-up and not at their standard, well then... It is laid out for you but a lot of the lads go away and train themselves. You can't get left behind.

Nice to share these moments with some of the @rahenygaa under 9’s after Sunday’s game Special memories ?

Fenton's career as a physiotherapist only adds to his advantages. This relentless wave of excellence could soon end in the coveted five-in-a-row and a place amongst the greatest of all time but for Dempsey, his legacy is more than that.

"A 39-year-old life-long club member passed away suddenly and his funeral was this morning. Brian Howard and Brian Fenton were outside in the guard of honour, walking the hearse down from the clubhouse up to the church, the lads had their club jerseys on.

"They are community guys, leading by example, always willing to assist the club, local schools, especially the next generation of juveniles coming through. I suppose a lot of people around the country take it for granted but it is important in a big city.

"That parish mentality is alive and well in Raheny. They do really give back to their club and the wider community….Ah, they are a special bunch."

Hurling
5 months ago
By Michael McCarthy
Quiz: Do You Remember The 2019 Intercounty Football And Hurling Championships?
GAA
1 year ago
By Mark Farrelly
Quiz: Name Every All-Ireland Football Final Man Of The Match This Decade
26

Hurling
5 months ago
By Michael McCarthy
Quiz: Do You Remember The 2019 Intercounty Football And Hurling Championships?
GAA
1 year ago
By Mark Farrelly
Quiz: Name Every All-Ireland Football Final Man Of The Match This Decade
GAA
1 year ago
By Maurice Brosnan
'If I Took A Break But Stayed Here, You Don’t Get Away. You Would Hear Talk Constantly'
Popular on Balls
Football
7 hours ago
By Gary Connaughton
Paul Scholes Is Unconvinced By A Manchester United Move For Jadon Sancho
133