'I Get Stick From The Kildare Lads For Going Over To Laois!'

Collins Ugochukwu was shocked when he got a call from Billy Sheehan late last year. The new Laois football manager was assembling his panel, and wanted him on board.

It was a surprise - partially as he's a Kildare man - but also because Ugochukwu had only just restarted his Gaelic football career after several years in Scotland and England playing professional soccer.

"I remember when my Courtwood manager messaged me saying 'Billy Sheehan is looking for you to be involved this year'," says Ugochukwu, speaking at the launch of SuperValu’s #CommunityIncludesEveryone campaign.

"I was like ‘Billy, are you sure now? You know I only started playing this year’. He was like 'Yeah, I've seen you play, you're okay.'

"I was like, ‘Are you sure you don't want to give me another year and see then?’ but Billy believed in me and I was like, if you believe in me, why not? I'll give it a shot." 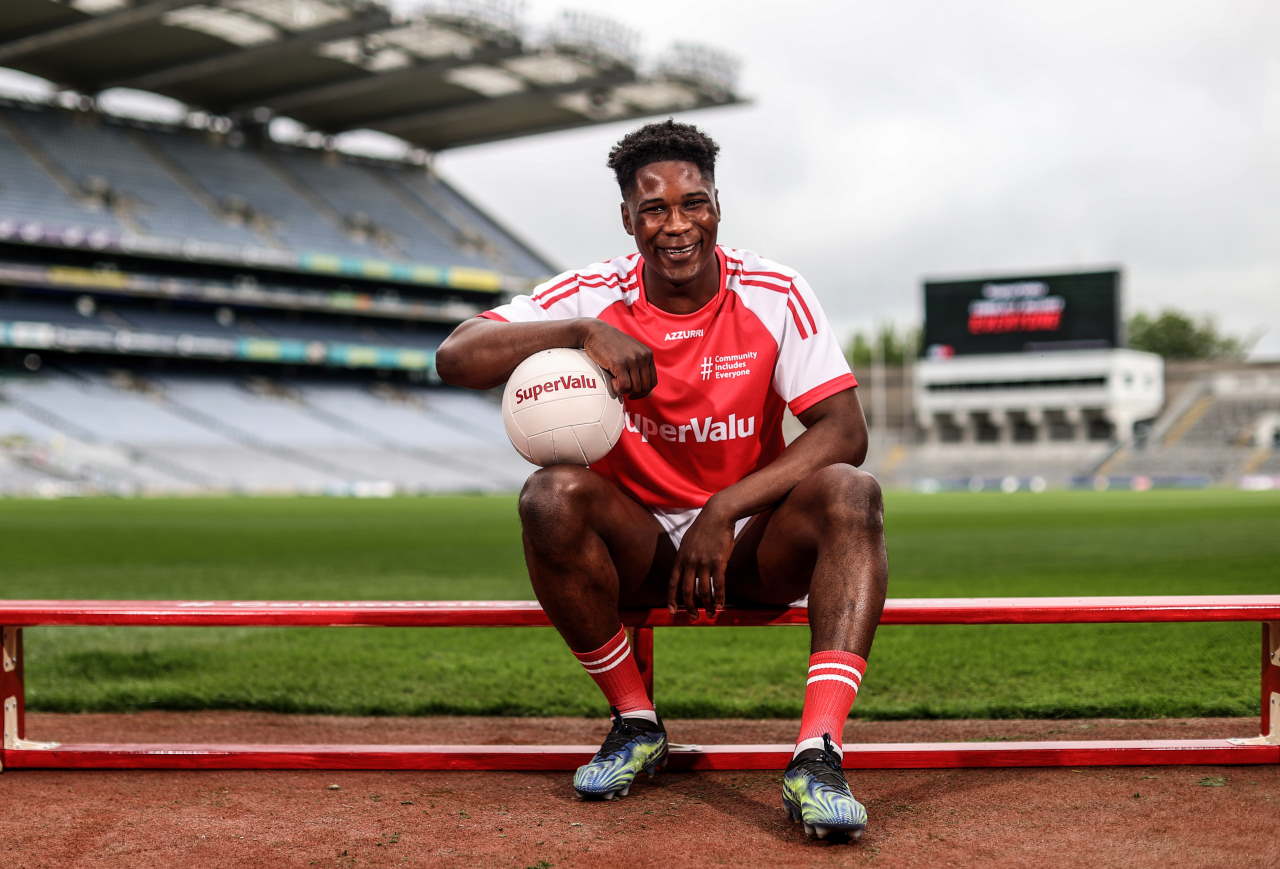 Pictured is Collins Ugochukwu, the first Nigerian-born player to play for Laois Senior Football, at the launch of SuperValu’s #CommunityIncludesEveryone campaign.

Ugochukwu moved from Nigeria to Kildare when he was three. He started playing soccer with Newbridge Town, and football with Sarsfields.

"From there I went to play with Bohemians for a while," he says.

"Then after there I went over to Scotland and was with Hibernians there and played on loan with a couple of teams. Selkirk, who are three divisions down, and then from there went to England and played for Crawley Town."

He was with Crawley when the Covid-19 pandemic hit in March 2020. He came back home to Ireland, and never left.

"Me and my partner came back here to visit," he says.

At the time I was waiting on a new contract with the club I was playing with and everything literally just stopped all of a sudden. No one knew what was going to happen because we didn't know how long things were going to be closed for.

I just thought I'd give it two months and hopefully things would pass and I'd be back over. But then sure we were in lockdown for two years.

I didn't know what was going to happen so at the time the local GAA club (Courtwood) started training collectively and my father-in-law was saying to me 'Would you like to train with us just to get your fitness up?' And that was it then. I was stuck here and stuck with the club!

He'd last played football at minor level with Sarsfields, but was thrown in at the deep end for one of his first Courtwood senior games when he was deployed as a man marker on Gareth Dillon.

"I didn't really know much about Gareth," he says.

"Now, after being in with the county team with him he's a lovely lad and a great, great player. I just went in there and said, 'Right, I'm going to stop him from playing and hopefully it goes the way I want it to go because I know how good he is and how threatening he can be when he gets going'.

"When I got to the pitch and I saw, 'Oh, okay, this fella is quite good so I'm just going to have to stick with him as much as possible'. Yeah, it kind of went our way, thank God. Like I said, he's a great player. It wasn't as easy as it might have looked, it was tough.

"That's one of the things I'm good at: Stopping a guy from playing and taking him out of the game. Sometimes that takes me out of the game but I'm happy to do that for the team because if a lad like that gets going, they can be hard to stop.

"I like doing that because we're all on a team. If we win, I win, so I'm happy. It doesn't matter about individuals. I try get involved in the game as well but I try to make sure the man I'm marking doesn't get anywhere either. And I really do enjoy that." 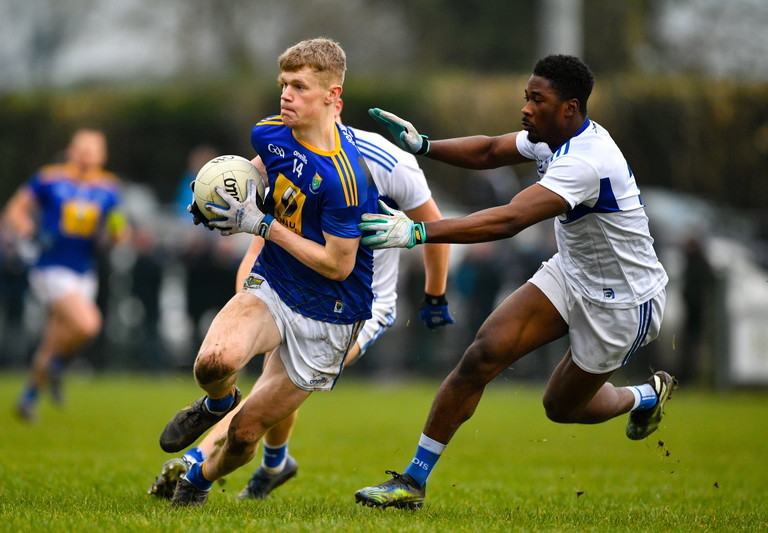 15 January 2022; Kevin Quinn of Wicklow in action against Collins Ugochukwu of Laois during the O'Byrne Cup Group B match between Laois and Wicklow at Crettyard GAA Club in Laois. Photo by Daire Brennan/Sportsfile

Ugochukwu made his Laois debut in the O'Byrne Cup against Wexford back in January. Billy Sheehan spent time working with him one-on-one, scratching the rust from the basic skills of the game. At the moment, he's not with the Laois panel as he had to step back for "personal reasons".

'Hopefully next year I'll back with Laois'

"I still keep in contact with Billy and the management," he says.

"We're still very close. Hopefully when the personal thing has been sorted out I can get back playing with Laois. I don't know if it'll be this year but hopefully next year I'll back with the county team. But I have to perform with the club team this year again in the Championship to get back in there."

Though he has been subjected to racism in Ireland, his experience in Gaelic games has only been positive.

"Yes, I have obviously experienced some racial stuff but I've never been involved with racial stuff in Gaelic, luckily. Gaelic has always been great and welcoming for me because I feel a lot of clubs do want lads from other cultures to be involved.

"Listen, personal issues yeah, there's racism everywhere. Some people would do it without even knowing it but I haven't seen it in Gaelic, which is great.

"Even now in club games, people would come over and talk to me. A lot of the Courtwood people are proud of the jump I've made. And kids are coming over, looking for pictures and a chat. That's great to be that kind of figure to them."

The main abuse he gets is from friends back in Newbridge.

"I get the stick from the Kildare lads for going over there [to Laois]!" he says.

Now in their 13th year of supporting the GAA All-Ireland Senior Football Championship, SuperValu is once again calling on each and every member of GAA communities across the country to do what they can to make their community more diverse and inclusive.

Featured image: 8 January 2022; Collins Ugochukwu of Laois during the O'Byrne Cup group B match between Wexford and Laois at Hollymount in Galbally, Wexford. Photo by Seb Daly/Sportsfile

GAA
16 hours ago
By PJ Browne
Massive Frustration In Ladies Football Over Rule 'Spoiling The Game'
GAA
22 hours ago
By PJ Browne
'I Made My Debut Vs London In 2011, A Dark Day For Fermanagh Football'
GAA
1 day ago
By Luke Delaney
Jackie Tyrrell Baffled By Brian Cody Selection Decision In Wexford Defeat
Previous Next