Tyrone All-Ireland winning footballer Conn Kilpatrick has opened up his gambling addiction and recovery from the affliction.

The Edendork player - who is likely to win an All-Star this year - had a breakthrough season at midfield with Tyrone.

Speaking on Claire Byrne Live, Kilpatrick revealed that he racked up £10,000 - £15,000 in gambling debts by early 2018. He was just 21 at the time. There was an 18-month period where he managed to quit, but then relapsed for six months, a time during which he accumulated further debt.

Kilpatrick said his introduction to gambling was "quite innocent".

"I maybe started about 15 or 16 doing a wee bet with my father and my brother on a Saturday just for a bit of craic and a bit of banter," he said.

"Then as I grew older, it kind of became more apparent. I was going into the bookies more, I had a few online accounts; I just seemed to find myself in the bookies quite a lot and doing quite more than what had started off as a wee fiver bet that was quite innocent.

"When we were 16 or 17, we were allowed to go up the town with our friends. My parents gave me a tenner to go to the chippy. Maybe I had £2 change and would go into the bookies.

"We'd sneak in, not let the staff see us because we were underage. We'd play the roulette table. If I got that £2 back up to a tenner, I saw that as me getting a free feed. That’s how innocent it started off, and it just got gradually worse."

Three weeks ago Tyrone footballer Conn Kilpatrick was celebrating an All Ireland victory in Croke Park. But three years earlier he was struggling with a gambling addiction.#CBLive pic.twitter.com/0msxZwKSkw

Kilpatrick is unsure how his gambling transitioned from a £2 bet on a roulette machine to a full on addiction.

"I loved the buzz of being there. You never had friends in the bookies, you just has acquaintances.

"I think back in 2018, people had an inkling because obviously if I was in the bookies quite a lot; with the football, people would have been talking saying ‘Did you see him?’ or ‘He’s been coming in quite regularly'.

"Then in 2018 it kind of all came out. I had just borrowed too much money and stole that much money that it all caught up with me.

"I was borrowing from friends and family. My brother, my granny - anywhere that I could get the money, to be honest.

"I was maybe saying that I needed to pay the car payment, or I was going on holidays and was a bit short and I needed a bit more.

"I could come up with a lie as quick as I could do anything. Whatever I needed to say to get it, I probably did say it. When you look back some of the things I said, it was crazy.

"I wasn’t a great person to be around. I was coming home and if I had won I was in a great mood but nine times out of ten I had lost so I was coming in very moody.

"Nobody could talk to me, I was always snapping back. I just wanted to go into my room and get on my phone and see who I could borrow money off, the next person, and what I was going to gamble on the next day, what football or horses.

"I was just kind of trying to think of ways to try and get that money back and get going again. It's terrible, to be honest." 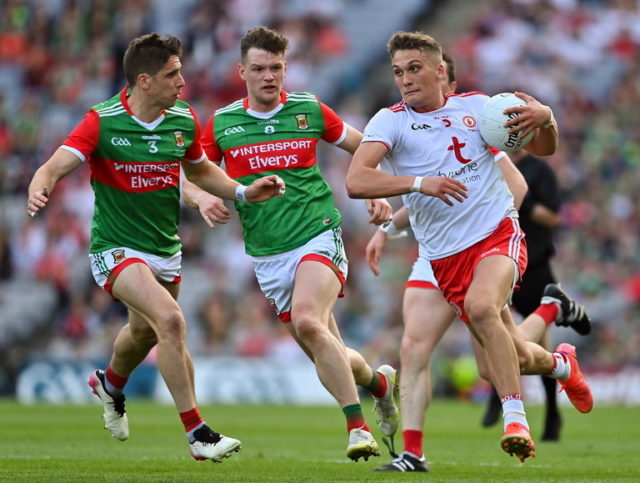 11 September 2021; Conn Kilpatrick of Tyrone in action against Lee Keegan of Mayo during the All-Ireland Football Championship final. Photo by Brendan Moran/Sportsfile

Kilpatrick said he was "caught" in February 2018 when three of his closest friends approached his parents with some concerns.

"They’d just heard too much," he said.

"They landed down and told my parents.

"I was actually at my girlfriend’s house and I got the phone call from my father and he said ‘Come on home here’ and I just knew by the tone of his voice that 'You're caught'.

"[Those three friends] were worried about me. I knew who to go to for money and I knew to keep it out of my close circle because then I thought it would get back, obviously I went too far and they found out.

"I landed home, and my brother goes to me, 'He knows everything. You may come clean'. I think about 85 per cent, I admitted to. There were different things that I didn't want to tell." 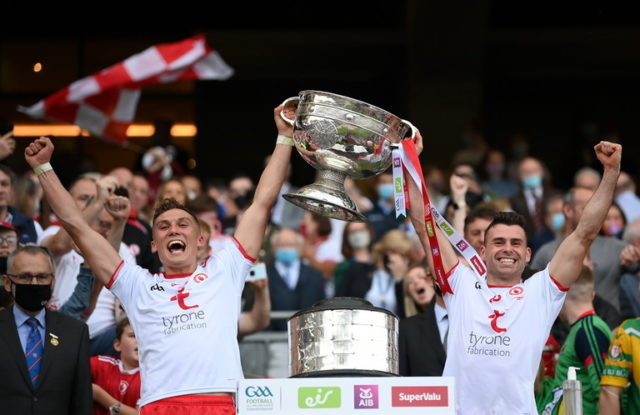 "I didn't got to any of them for the first year-and-a-half. I felt I could get over this myself. I felt embarrassed that people in the town would see me going into this Gamblers Anonymous meeting, and people would be talking about me, and that kind of hurt. At the end of the day, I should have went to them."

A year-and-a-half after quitting, Kilpatrick relapsed. It was totally unplanned. He just woke up one morning, picked up his phone, and starting betting again. Six months later, a friend alerted Kilpatrick's father.

"[My father] was just distraught - ‘How can you let this happen? Do you not know what you’ve obviously done to the family and the hurt you’ve caused?’ And he was 100 per cent right," he said.

With the help of the Gaelic Players Association and a counsellor, Kilpatrick managed to quit again.

"I’ve been off it now a year and a half and it has changed my life, both on and off the pitch," he said.

"I can go to bed sleeping at night without worrying about who I owe money to, about where I’m going to get the money tomorrow. I can go to training. In the past I was going to training to probably get away from it and take a break from it but it was still hindering my football."

If you have been affected by the issues raised in this article, you can visit Problem Gambling, Dunlewey.org or Gamblers Anonymous for help. 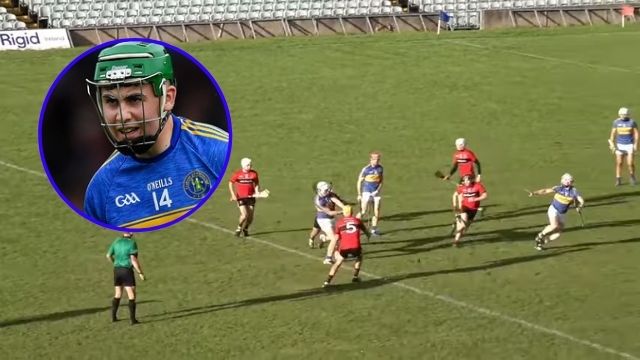