Only in Kilkenny could you have four All-Ireland titles and barely a word spoken about you. Conor Fogarty has been in Brian Cody's squad since 2011. By 2014, he was established as part of the starting team and would play midfield in three All-Ireland finals in a row.

Yet Conor Fogarty, son of long-time Cody selector Martin, has no All-Star awards, and very rarely receives the fanfare of the masses. He's often just there. Appreciated by fans, but rarely thought about.

Yet hurling teams at the top level can't exist without a player like Fogarty. A role player who does the important jobs on the pitch that can so easily be missed in the insanity of a championship game. His expertise will never be as appreciated as the full back who makes the crowd-lifting clearance, or the wing back who pops the occasional sideline over the bar, or the forward who can create a score out of nowhere, but to Brian Cody, it's an expertise he'd choose as quickly as any of them. 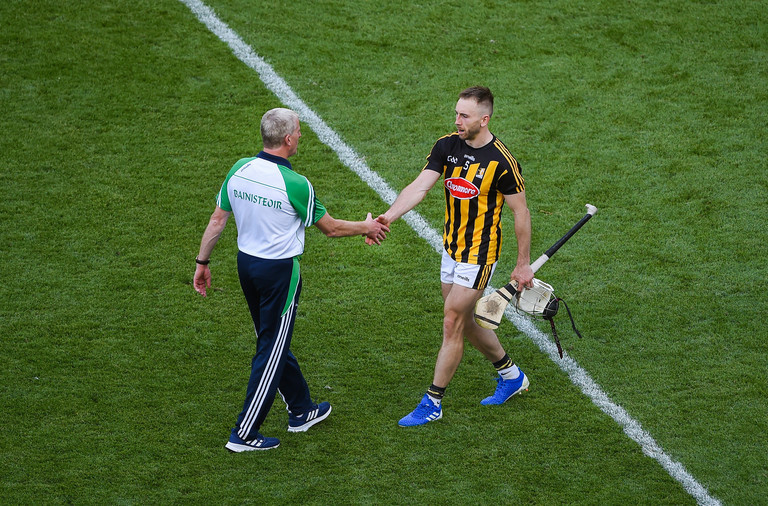 Going between midfeld and wing back this season to fit the opponent, Fogarty has been immense. Against Cork, he took Conor Lehane completely out of the game. Against Limerick on Saturday, he did the same to Gearoid Hegarty.

But he's not just a stopper. Fogarty has the ability to swallow his man whole, while still influencing the game in others areas. Smart use of possession and his perfectly times tackles and challenges were to the fore on Saturday again.

On this week's Three Man Weave, Balls.ie GAA podcast, Maurice Brosnan, Mick McCarthy and Mark Farrelly discussed Fogarty's influence on the game. While TJ Reid, Adrian Mullen and Colin Fennelly will rightly get the plaudits, it's time we recognised the role Fogarty plays within this team, and how crucial it is to Kilkenny's success.

Maurice: The other player who probably won't get the same plaudits as a lot of other players will, definitely not as many as the forwards, Conor Fogarty.

Conor Fogarty is a master of understated defending. He's perfectly times his interceptions. He kind of glides, he's as sticky, but very rarely seems to actually foul a player. He's patient and just manages to get his hurl in at the perfect time.

He kind of reminds me of, do you remember the old Kerry cornerback Tom O'Sullivan? He'd just wait, wait, wait, then someone goes for a solo and the ball's gone. Fogarty is the same, his timing is impeccable constantly.

Mick: He's an interesting one to bring up because I think he's been one of Kilkenny's best players this year but he doesn't come up really in the conversation for All-Stars.

He's at the place now where he was so good against Cork, and was brilliant again at the weekend,. If he has a good All-Ireland final, he should be nailed on, but I wonder when they actually come to it and sit down for it, are they still talking about the more flashy players at wing back and in midfield? Fogarty's been there for so long and he's been so consistent and so good, but he never gets any plaudits.

I'm actually really glad you brought him up because he was so good against Cork and continued it on again this week.

Maurice: He started off on Gearoid Hegarty and cleaned him. Hegarty was taken off early in the second half.

And then, as William O'Donoghue started to come into the game more and more, he occupied that central space because you need someone to stem the tide of those runners and Fogarty did that as well and he manages to read situations really well.

You can download to the full Three Man Weave episode here or listen to the show below.

GAA
2 hours ago
By PJ Browne
Marc Ó Sé: Kerry Will Win Sam, And They Should Have Won It Last Year
GAA
7 hours ago
By PJ Browne
Gordon D'Arcy Explains Role With Wexford Hurlers
GAA
9 hours ago
By Leah Hogarty
Padraig Pearses: Roscommon Champions Enjoying An Unforgettable Season
Popular on Balls
Football
2 days ago
By PJ Browne
Ireland's Lee O'Connor Says It Was An 'Easy Decision' To Leave Celtic
Football
1 day ago
By Eoin Harrington
Quiz: Name Every Player To Score In A Champions League Final
Rugby
23 hours ago
By Colman Stanley
Roy Keane Made Quite An Impression On Eddie Jones And The England Rugby Team
52