"I'd love a crack at them alright, I definitely would," said Conor Gormley. The three-time All-Ireland winner had just been asked who would win between his Tyrone side and reigning All-Ireland champions Dublin.

Now three years into retirement and working as a coach with the Tyrone county board, Gormley believes the Tyrone team which won All-Ireland titles in 2003, 2005 and 2008 could take the Dubs.

"It would have been an interesting game," Gormley said at the launch of the EirGrid GAA Football U20 All-Ireland Championship.

"Two different styles, but I'd like to get stuck into them alright and see how it goes with them.

"I'd go for ourselves, definitely, but it would be a good game. There would be great hype about that game. It would be a massive, massive game.

"They've some unbelievable players when you look at what they have at the minute. I mean, they haven't got Diarmuid Connolly whatever the situation is there, but and you look at the players they have to come in.

"The likes of Paul Flynn to come in, Kevin McManamon isn't really a full starter all the time, they've boys like young Costello to come in, Howard coming in out of nowhere, young Scully as well.

"They've a bunch of stuff, it's unbelievable. I wouldn't mind a wee crack at them now, definitely wouldn't." 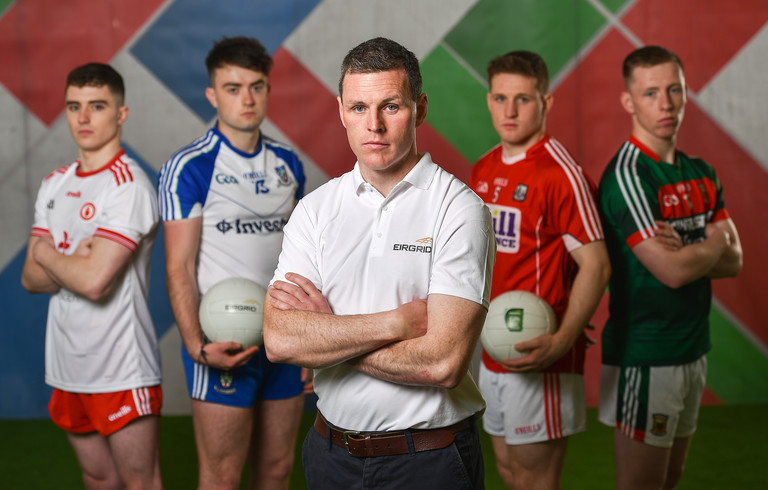 The 37-year-old believes that Dublin's armour is reinforced by opponents building up Jim Gavin's side.

Maybe they're up on a pedestal, the media or whatever puts them up that high and maybe that can affect players individually or the team come the crunch time of the game.

The likes of Kildare pushed them hard a couple of times when they played them and fell away in the last quarter. They're not unbeatable.

"Tyrone last year, their performance didn't go to plan against the Dubs.

"If I was a Tyrone player now I'd be thinking, 'Get to May, get a bit of a run going and I want to be playing Dublin come the Super 8s, or the semi-final or final. That's where I want to be, I want to prove that I can play better than what I showed last year'."

Tyrone stalwart, Conor Gormley with U20’s players, from left, Conor Shields of Tyrone, Fergal Hanratty of Monaghan, Ryan O’Donoghue of Mayo and Liam O’Donovan of Cork at the launch of the EirGrid GAA Football U20 All-Ireland Championship. EirGrid, the state-owned company that manages and develops Ireland's electricity grid, enters its first year of sponsoring this competition after being title sponsor of the EirGrid GAA U21 Football Championship since 2015. #EirGridGAA . Photo by Brendan Moran/Sportsfile

GAA
1 year ago
By Maurice Brosnan
Cork’s Redemption, Tyrone’s Revenge: Journeys Through The Back Door

GAA
1 year ago
By Maurice Brosnan
Cork’s Redemption, Tyrone’s Revenge: Journeys Through The Back Door
Popular on Balls
The Rewind
45 minutes ago
By Gary Connaughton
Lidl Will Have Electric Scooters Available In Store Next Week
Football
59 minutes ago
By Sean Meehan
Here Are 5 Stats That Showcase Just How Unbelievable Gianluigi Buffon's Career Has Been
1