Any day that Cork beat Kerry in Championship football is going be notable. Last night at Pairc Ui Chaoimh, the Cork U20s won a thriller against the old enemy in the U20 Munster Semi-Final, avenging a one point defeat to the eventual All-Ireland champions at the same stage of the 2018 Minor Football Championship.

Do your self a favour and stick on Cork v Kerry in the U20 championship. End to end stuff on @GAA_BEO 🙌🏽

In a game where Cork led throughout, a red card and penalty awarded in the 49th minute swung the tide towards Kerry, and the game looked to be heading to extra-time when substitute Ciaran O'Sullivan hit the winner, Cork's first score since the sending off, in the fourth minute of injury time. Kerry's star player Paul O'Shea had a late chance to equalise, but sent it wide. It ended with a scoreline of Cork 3-12 - 3-11 Kerry.

After such a dramatic win against a Kerry team managed by the legendary Declan O'Sullivan and including nine minor All-Ireland winners, emotions were bound to be high when manager Keith Ricken spoke to TG4 straight after the game.

The watching public were then gifted to an interview worthy of any great game. Ricken, speaking with passion throughout but with a very level head, spoke extensively about the virtues of his group of young men, the respect for the referee, a respect and love for all young people playing sport, and dismissing sporting emnity.

It was a breath of fresh air in a world where so much negativity reigns.

While emphasising that it's only step one of four for Cork to achieve their goal of winning the All-Ireland, Ricken is also at pains to point out that a number of young Cork men beating Kerry is something to enjoy, and brilliantly dismissed the cliché of bringing the group back down to earth ahead of the Munster final.

There's nothing won. But we're delighted. What has been won is that they took off the ground. They're up in the air now, as such. They're flying.

While a contentious refereeing decision that saw Kerry win a controversial penalty and resulted in the sending off of  Colm O'Donovan was a major talking point after the game, Ricken insisted it didn't matter if it was the right or the wrong call, showing the type of respect for refereeing that is almost entirely absent in modern GAA.

I have great and utmost respect for any man who togs out in the middle of the field and blows the whistle. I would certainly say the he was the nearest man to it, and I give him utmost respect.

I never question the referee's decision really, as such, because it's disrespectful to him and everybody else. There was decisions both ways, you could be arguing the toss. But he's doing it in real time, and it's a lonely ol' spot.

I'd have no qualms about that. I'm sure if you look at it again, it was or it wasn't. He does that to learn himself. We don't look at that again. Our job is to look at, what are the learnings in it for us, and how do we prevent that ball from going down there in the first place? Because the ball was down there it shouldn't have been!

Ricken, who was appointed to the U20s job in 2019, is someone who has spoken many times about working at that level to develop the person as well as the player. Speaking to the Irish Examiner this week, he made it clear that his selection is as much based on personal development as player development.

Good people is everything because it is good people that sustain, they keep going. A good player is very fickle, it is very single-layered. It is just a veneer. The depth actually comes from your character.

We have a huge emphasis on finding out their character and developing their character. I have two jobs and one job is completely done: I have found 36 players and I have done a lot of work with them in their development and in their personal development.

During his interview last night, the country became all the more aware of the healthy, hollistic approach to management that all (underage especially) coaches should strive for. It'll be difficult not to want to see Cork go all the way from here.

The GAA world were in awe of a raw and honest interview we so rarely see.

I’m privileged to work with this man .. his attitude and focus towards these young men is phenomenal .. yes he loves to win .. but ye loves the fact that he has made these lads better people even more .. thanks Keith

What a brilliant interview, from a brilliant man. Keith Ricken, the Cork U20 Manager after a famous win over Kerry. No games, no nonsense- just brilliant pic.twitter.com/gwjmWupQuT

Keith Ricken has this unique way of making players feel like there 10ft tall regardless of outcomes or circumstances. He did it with me at U16 level many years ago and brilliant to see him still doing it. What a man 👏🏼👏🏼👏🏼👏🏼👏🏼 https://t.co/56Kr0o4okz

SEE ALSO: A Decade After Memorable Debut, Paddy McBrearty Is One Of The Best 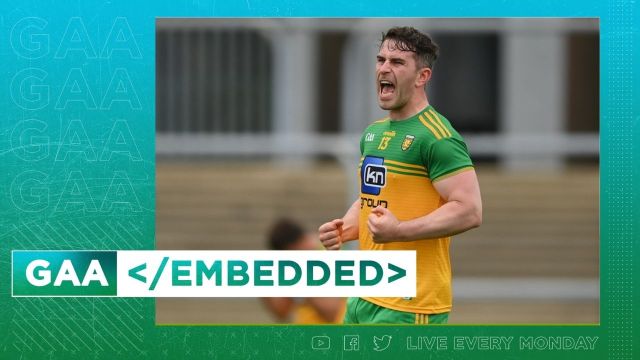 GAA
22 hours ago
By PJ Browne
Meyler And Morgan Open Up About Tyrone Covid-19 Troubles
GAA
1 day ago
By PJ Browne
'They'll Know That Not Enough Of Them Came Anywhere Near Their Level Of Performance'
Quiz
2 days ago
By Michael McCarthy
Quiz: Do You Know What Year These Classic Irish Sports Photos Were Taken?
Previous Next