Munster has finally gotten in on the Electric Ireland Minor Hurling Championship act with two cracking games taking place this past weekend. Tipperary took on Limerick while Cork hosted Clare in the first round of games, with each county knowing that every fixture has a huge bearing on the final standings: only the top two in the round robin series advance to the next round and a place in the provincial final.

Five top quality teams, including Waterford who are on their bye week, will have genuine hopes of silverware this year, but the margins are so slim that the smallest error could signal the end of their campaign.

Meanwhile the Leinster MHC continued apace in its second week of action, with the three favourites for the final -- Kilkenny, Dublin and Wexford -- all taking to the pitch, while there was a second successive nomination for one player in our list of three for the Electric Ireland Minor Hurler of the Week.

We had a feeling we would be in for a good game last weekend when Wexford and Kilkenny faced off, bringing two star players head-to-head: AJ Redmond and Conor Kelly. The two boys were nominated for player of the week in the previous round, with the Wexfordian winning out in the public vote. With that in mind, who would come out on top?

Beautiful day in Nowlan Park, less than an hour to throw-in for the Leinster MHC game @KilkennyCLG Vs @OfficialWexGAA at 2pm. Ardán Breathnach stand is the ONLY stand open for today’s game. pic.twitter.com/WgLwsVH0Lg

In the first half it seemed as if it might be Redmond again, as Kilkenny conceded the first point of the contest to the star forward. It was Kelly's consistency that pulled them ahead, pointing away just when they needed to maintain their lead in the game. Before the Yellowbellies knew it, they were 0-5 to 0-1 behind, Kelly scoring two of those, and simply couldn't keep up.

The second half bore witness to the Cats' roar, as they tore into their opponents on all fronts. Eoin Guilfoyle ended the match with a tally of 2-2, but it was Conor Kelly who stole the show. Wexford could not find a way to stem the flow coming from his direction, as he knocked over seven points in all.

Redmond may have scored 0-8 on the day, but he didn't inspire his colleagues the way Kelly did, with the away side falling to a devastating 3-21 to 1-12 defeat in Nowlan Park. Can anyone in the Electric Ireland Minor Hurling Championship stop Kelly and his black-and-amber comrades?

A hugely competitive tie on Sunday saw Limerick complete the double over Tipperary, as their minors showed the way for the seniors at the Gaelic Grounds.

Seven times these two sides were level as the game reached its tipping point, with Tipp looking good for the two points on offer until Limerick staged a tremendous comeback to claim their first win of the Munster MHC.

Limerick have beaten Tipperary in the opening round of the MSHC. Watch our full-time highlights here on GAANOW! pic.twitter.com/dmP5OBtrbz

Cathal O'Neill put in a man of the match display, scoring 0-10 with six of those coming from play, but it was looking grim for the Treaty County as the clock ticked down. Sean Hayes scored two goals to pull Tipp ahead by 2-9 to 0-10 with eleven minutes to go, but Limerick never lost their nerve.

Cormac Ryan scored the goal to get them back in the tie, but it was O'Neill's steady wrist that kept them in contention. The Ardscoil Ris star's leadership from the front was exceptional and it was no surprise that he got the final score to end the game with a two point lead. Limerick now sit in second place in the round robin behind Cork on points difference ahead of their bye week.

The young Rebels left Páirc Uí Chaoimh with the spoils on Sunday thanks to three things: their fighting spirit, a Clare red card, and Shane Barrett.

Not to be confused with the Dublin hurler, Barrett could have easily been on the losing side this past weekend. By the seventh minute the Banner were already 2-0 to 0-3 ahead and looked hungry for goals. 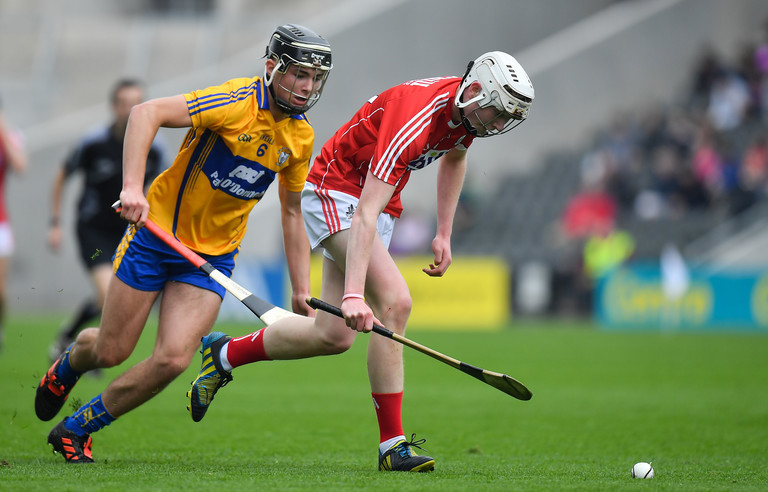 It was their captain who scored the equalising point in the 17th minute, bringing the score to 2-3 to 0-9, but Clare would nab another goal before the interval.

A second yellow card for Clare wing-back Tony Butler shortly after the restart was a major blow but they kept at Cork nonetheless. Still, when they needed their leader to stand up and take control of the game, Shane Barrett answered the call and helped them see the game out.

Barrett's tally of 0-4 in a high-scoring game, in a weekend of high-scoring games, may not seem that impressive, but his innate qualities that go under the radar will aid Cork immensely in their quest for glory in the Electric Ireland Minor Hurling Championship.

GAA
9 months ago
By Michael McCarthy
'Cork Are Afraid Of No-One. If They're In A Final, They'll Always Have A Chance.'
GAA
4 years ago
By PJ Browne
Watch: Jack Canning's All-Ireland Minor Final Man Of The Match Interview
Popular on Balls
Football
4 hours ago
By Eoin Harrington
Juan Mata Questions Manchester United Management After Dire Season
Golf
2 days ago
By Gary Connaughton
Padraig Harrington Glad He Didn't Have To 'Make A Decision' On Saudi Golf League
Football
1 day ago
By Gary Connaughton
The Frank Lampard Love-In After Everton's Survival Was Downright Bizarre
GAA
2 days ago
By PJ Browne
'It Came At An Awkward Time. I Didn't Think It Would Be So Bad'