Cork footballer Doireann O’Sullivan welcomed last night’s merger of the WGPA and the GPA. Speaking on a Zoom call ahead of Sunday's Ladies football final between Cork and Dublin, the Mourneabbey player explained how there was huge support for the move amongst members of both associations.

'We’d a zoom call last night. The first half an hour consisted of the WGPA reps and inter-county players, there was a powerpoint presentation, just discussing and outlining what it would entail.

'I suppose the pro’s and con of amalgamating. Then the second half of the zoom call, we joined with the GPA and it was a unanimous vote.

'I think it’s 96% of the WGPA voted for it and 100% of the GPA voted for the two joining. I think it’s a huge step forward for us. I can only see positives coming from it,” the Cork footballer said.

An historic development tonight as a combined @gaelicplayers Association (representing Women & Men) is formed with overwhelming support from players.
V proud to chair the board of such a progressive organisation that embodies the values of Equality, Diversity & Inclusion so well. https://t.co/3juwb3JYah

O’Sullivan is not looking to paid for playing football, though the Mourneabbey star feels going to training should cost no player money.

'One of the topics discussed was the expenditure or travel expenses. That’s a huge thing between men and women’s football at the moment, is girls travelling.

'I think that is the big one. I don’t think anyone should be out of pocket for representing their county. Obviously we’re not looking to get paid, but just to get covered for the travel and the mileage, the girls are cropping up,' O’Sullivan said.

A report from earlier in the year found that 93% of ladies footballers receive no travel expenses.

O’Sullivan would love the LGFA to merge with the GAA and would dream of playing in front of 82,300 people in Croke Park on All-Ireland final day.

'Yeah I think that would be exciting (merger). I think as well as pitch availability, the thought of double headers would be really exciting. I think we’ve done it twice now and it’s been very, very good. 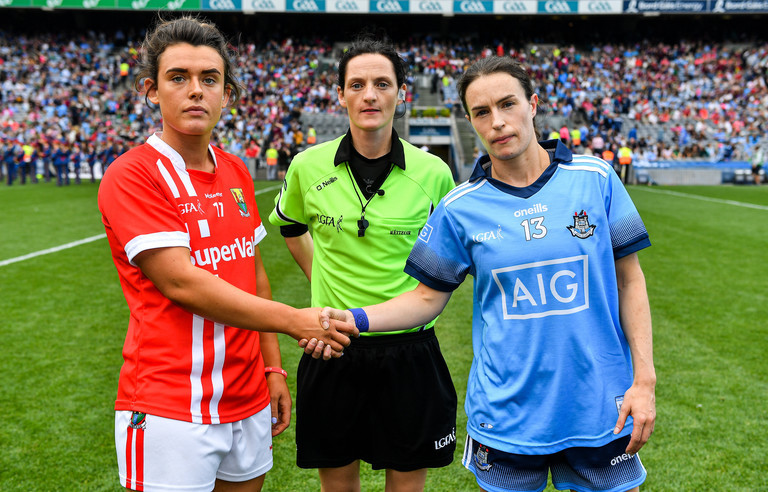 O'Sullivan thinks the absence of spectators may work in her side’s advantage when Cork face Dublin at GAA HQ.

'Croke Park being in Dublin – usually Dublin then tend to have the majority in attendance. I do think that it’s a benefit for us that there’s no crowd.

'I just think that communication on the pitch, it’s a lot easier to hear the person beside you, to hear management, just to hear those calls.

'I couldn’t believe that the last day against Galway – how much easier it is to communicate and get messages across.

O'Sullivan is hoping to collect her sixth All-Ireland medal on Sunday, while she also won two All-Ireland Senior Club titles with Mourneabbey.