Could Tyrone Be The Real Deal This Year?

Until today, Tyrone had been lying in the low grass. But now the question is: are Tyrone the real deal? Despite the fact their 5-18 to 2-17 annihilation of Cavan today wasn't shown live on national TV - Tyrone's ambitions suddenly seem crystal clear. They are genuine All-Ireland contenders.

Coming into today's replay with Cavan, Tyrone were acknowledged not to have beaten much against Derry in their Ulster opener and they didn't pull up many trees against Cavan in their original clash two weeks ago. But today, they won by ten points and it could have been a lot more. 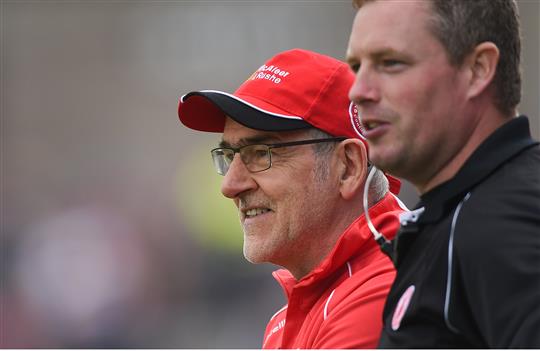 Tyrone conceded three goals in the first encounter against Cavan two weeks ago but today they were a different machine. Admittedly, they did concede two late goals in the second half but no matter what way you look at it - it's a ten-point turnaround from last weekend.

Alan Brogan in his column in this morning's Sunday Independent said that he thinks Tyrone are the best-equipped team in the country to challenge Dublin's dominance and he might just have a point. The fact that he said it before today's Tyrone masterclass was all the more impressive - but also emblematic that there have been whispers about Tyrone this year among those in the know. Brogan said:

"To me they are the one team that have the artillery to really trouble Dublin in Croke Park. They are systematic, they have a game plan with involved Colm Cavanagh sitting back and directing an operation that has been practiced a million times over...

Over the last few years Mickey Harte has readied this squad to mount a serious assault at an All-Ireland title...  They are better suited to the varied demands of Croke Park than either Monaghan or Donegal.
They have returned slightly under the radar, but mark my words, Tyrone are back and looming with intent.

Peter Harte was imperious again today - his two first-half goals which came within a three-minute burst killed off the Cavan challenge and Mickey Harte's men really opened up in the second-half with further goals from Conor McAlliskey, Rory Brennan and Mark Bradley.

They will face a Donegal team in two week's time in a mouth-watering clash. It's somewhat of a cliché in GAA terms to say that a replay sharpens a team but Donegal have been pitched at the white-hot coalface of championship battle for the last two weeks.

It's debatable whether Cavan's challenge will have brought Tyrone up to the same level - but they showed an attacking edge that could really test the Donegal defensive set-up.

Speaking after today's game on Newstalk, Sean Cavanagh admitted as much:

The chances kept coming and coming, obviously we're very happy with the scores we threw up but we were sloppy at the back at times in the second half there.

No matter how much you try and not be complacent, we probably took our eye off the ball to a certain extent. There's still work to be done from that respect, but I think we're in a happier position than we were two weeks ago.

After conceding five goals in their two games against Cavan, Mickey Harte has plenty to work on over the next two weeks. If Cian Mackey caused Tyrone that much bother - Michael Murphy and Paddy McBrearty will be licking their lips.

When you consider the lack of excitement in today's Munster final - and the Dubs presumptive coronation in Leinster (taking place the same day as the Ulster final)... Tyrone-Donegal should be a cracker.