A large portion of the post-match discussion after both of the All-Ireland hurling semi-finals focused on the performance of the matchday referees.

On Saturday, Alan Kelly was the referee for Limerick and Kilkenny's blockbuster tie in a game that saw a penalty as well as debate around steps in the build-up to a goal and a deflected sideline that did not result in a '65. 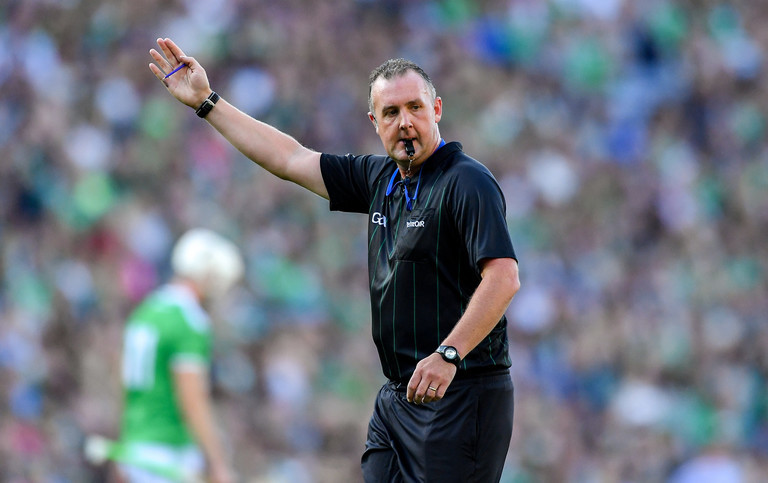 On Sunday, Seán Cleere refereed Tipperary versus Wexford at Croke Park and once again there was discussion and criticism surrounding ruled out goals, hawk-eye's intervention and possible penalties.

Speaking to RTE, GAA’s National Match Officials Manager, Donal Smyth pointed out that officials are like players and can make mistakes.

"A referee makes in the region of 90 to 100 decisions in a game so they are going to get some of them wrong – that’s human nature. Players (make) mistakes too," he said.

People talk about the work that players put in, but referees put in the same work too and the decision that a referee makes in the last minute has to be the same as the decision they make in the first.

Seán Cleere was going as hard as any of the players at the end of the game. Between them the two teams brought on nine substitutes and he was still getting up and down the field with them.

He went on to point out that referees are aware when things go wrong.

"Our referees train as hard and work as hard as anyone else and they feel as bad as any player when it goes wrong because this is a huge part of their lives."

Speaking after Sunday's game, Tipperary boss Liam Sheedy explained he was frustrated with some decisions but understood it was a difficult job.

"I know Sean very well. He is a very competent referee. The game was moving at such a pace, it is certainly not an easy job. My job is much easier. From our point of view, there were a few times you thought you might get the break."

It was an issue highlighted on the Sunday Game programme as well, where the pundits agreed a referee does not get enough help in the modern game.

Hurling
1 year ago
By Michael McCarthy
Quiz: Do You Remember The 2019 Intercounty Football And Hurling Championships?
GAA
2 years ago
By Balls Team
The Balls.ie Selection For The Hurling PwC All-Stars
GAA
2 years ago
By Mark Farrelly
Nominations For PwC Hurling All-Stars And Player Of The Year Revealed
Popular on Balls
GAA
2 days ago
By PJ Browne
Cusack Has Little Sympathy For Gearoid Hegarty After Red Card
Football
7 hours ago
By PJ Browne
Man Arrested For Headbutting Billy Sharp After Playoff Semi-Final
GAA
1 day ago
By PJ Browne
GAA President Explains Why Tailteann Cup Won't Be All-Ireland Curtain Raiser
Football
3 days ago
By Eoin Harrington
Alan Shearer Says Roy Keane "Ran Away" From Him After Famous Clash