'I've Had A Weird Feeling For Mayo All Year. I Like The Look Of Them'

In the build-up to the All-Ireland semi-final between Mayo and Dublin, Darran O'Sullivan got a call from a cousin in the US. O'Sullivan had just tipped Mayo to win the All-Ireland. His cousin wanted to know if he was feeling alright.

Since Tyrone's victory over Kerry in the other last-four game, O'Sullivan - the 2009 Kerry All-Ireland winning captain - has flip-flopped on his prediction of who will win this year's All-Ireland. Ahead of this weekend's final, he has settled on Mayo.

"Initially, I had this feeling for Mayo," O'Sullivan told Balls.ie's GAA Embedded show.

"Then after the Tyrone game against Kerry, I started leaning towards them because it was fresh in the head. I've watched it back since, and it was a very good performance, but [Tyrone] coughed up a lot of opportunities.

"I've had a weird feeling for Mayo all year. I like the look of them. I like their new players that have come in - they have great energy, great pace.

"I think the newer fellas don't have that psychological baggage that maybe some of the older fellas have been carrying for the last couple of years.

"I think maybe everyone would like to see them do it, bar maybe Galway people who wouldn't want to be listening to them."

Two of the major questions going into the final are about Aidan O'Shea and Cathal McShane. After a poor display in the semi-final, O'Shea was substituted with 20 minutes of normal time to play.

"I think it has to be closer to goal in the full forward line. If he's out the field, Tyrone, with their energy levels and intensity, they will target him."

McShane, just recently returned from injury, stepped off the bench for Tyrone against Kerry, and had a major impact, scoring 1-3. O'Sullivan thinks that Tyrone should leave 2019 All-Star in reserve.

"I think Mayo need to have a plan B," said O'Sullivan.

"That's what hindered Kerry [against Tyrone]. They didn't have a plan B. They seemed to be doing the same thing over and over again.

"We all know Mayo's plan A is an all-action running-style game. Their gameplan worked to a tee against Dublin. They held themselves back in the first half, held a bit of energy in reserve. It will be interesting if they do something similar or if they go at it from the start.

"Tyrone have been playing the same way all year. They bring that manic intensity that Mayo also bring, but they've become a lot more direct this year.

"In McGeary and Meyler, they have two lads in the running for Player of the Year. They are two all-action players, but they will mark you out of the game, and at the same time put their own stamp on the game. It's going to be interesting to see who they pick up.

"I've always said that Tyrone are the best at twisting the narrative, no matter what. They'll be able to find a way to get so fired up for this that you'd swear the whole world was talking about them in a negative way. They'll be in dressing room going, 'Everyone wants Mayo to win. The world is against us'. That'll bring them out fighting.

"I think the best thing about this final is that you're going to have a new winner. Obviously, I was dying for it to be Kerry. The fact that it isn't a Kerry vs Dublin, or that one of them isn't in it, is brilliant for the game.

"Mayo have been next best team for the last 10 years. People do want to see them get over the line."

Conor O'Shea: 'In ‘16, He Was A Really Important Player. He Was Out Of Favour Since' 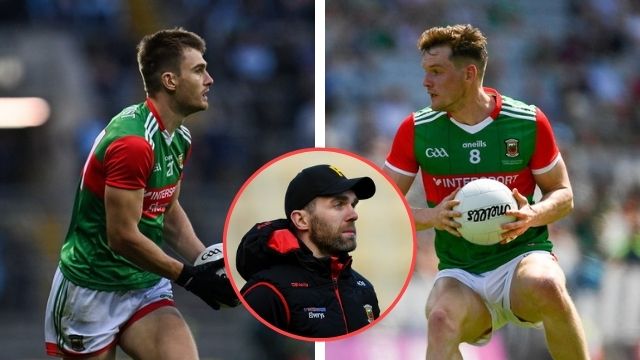