On three separate occasions on Sunday, Aidan O'Shea clashed with David Moran off the ball in Fitzgerald Stadium.

There was the pre-throw-in exhibition of bumper cars without the cars, a shemozzle after Mayo were awarded a second-half free and a moment on the stand side in the 70th minute after Jason Doherty put Moran out over the line and O'Shea ran in to confront the Kerins O'Rahilly's man. 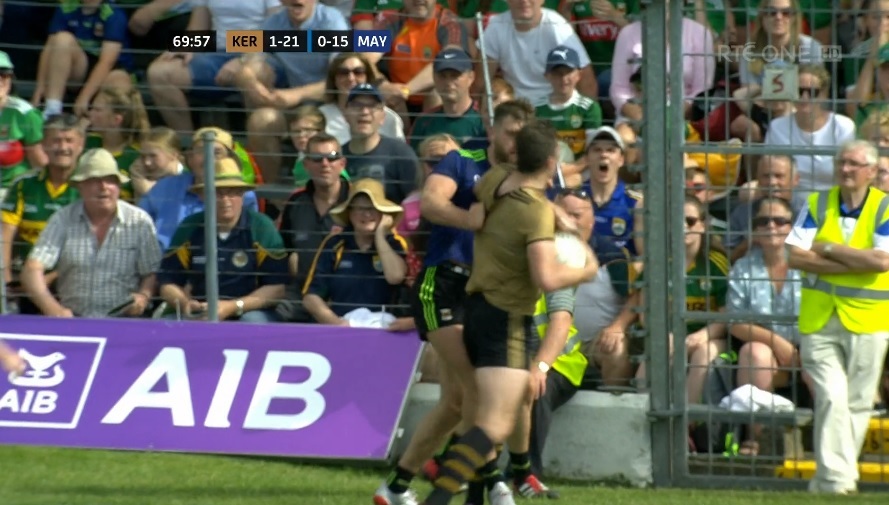 It was the match-up that many predicted would prove crucial and one Kerry were found lacking in during the division one league final. Kerry's midfield did not secure a single successful turnover and struggled from the kick-out. Neither player who featured that day started last weekend.

At the time it was highlighted that this was Kerry's problem, a good system poorly implemented. It was all a bid to marry a productive attacking gameplan with a solid defensive one. They were headed in the right direction but needed a marked improvement from key personnel.

2018's Young Player of the Year is crucial to it all. David Clifford remained further up the field and despite being just 20 years old he is now a vital cog in an effective machine. A look at where his possessions came and what he did with them demonstrates as much. 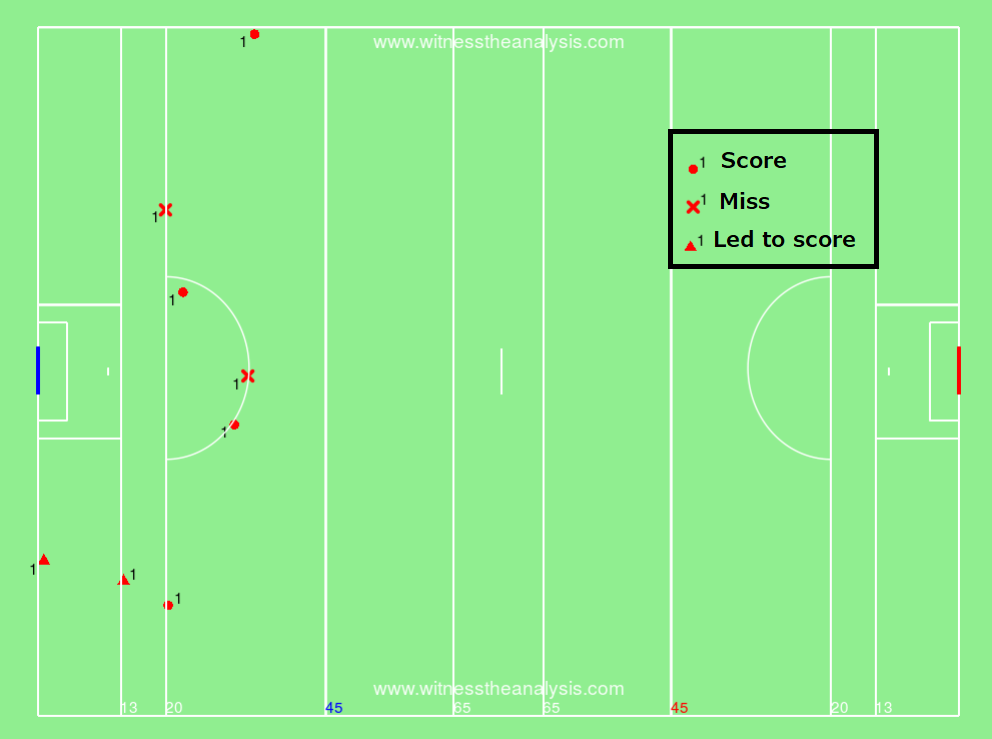 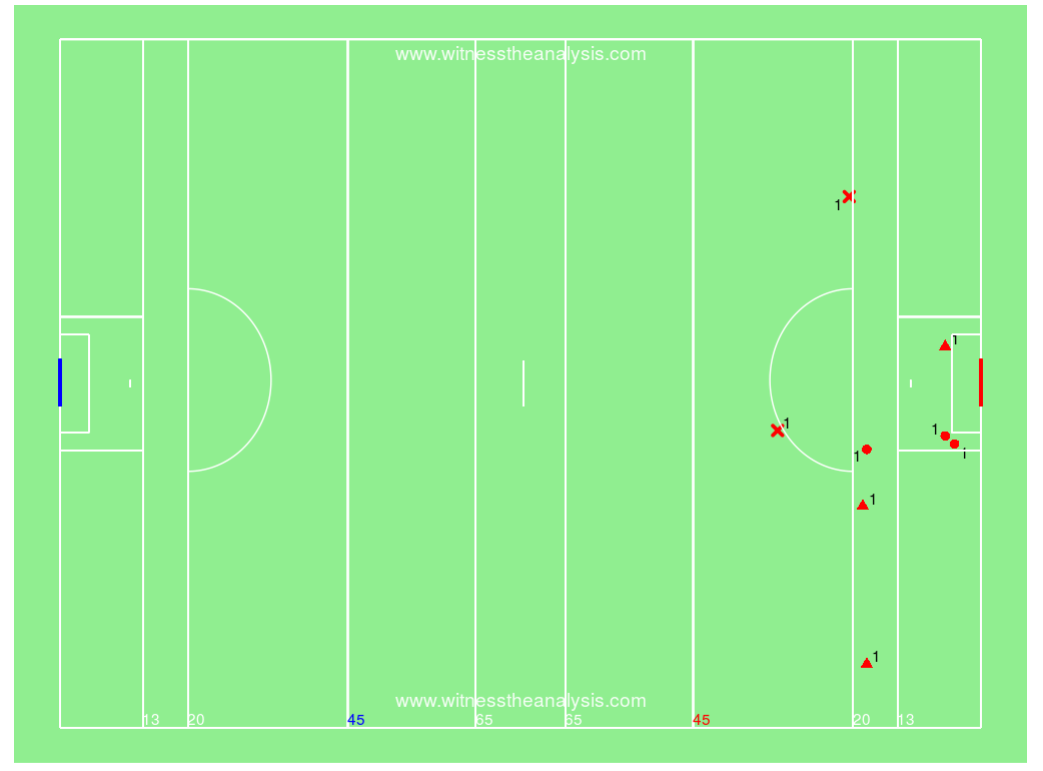 Like the last time they played Mayo, Clifford pressed high and allowed a mobile half-forward line to track runners and ensure he was never dragged out the field. The issue in March was on the other side of the ball. 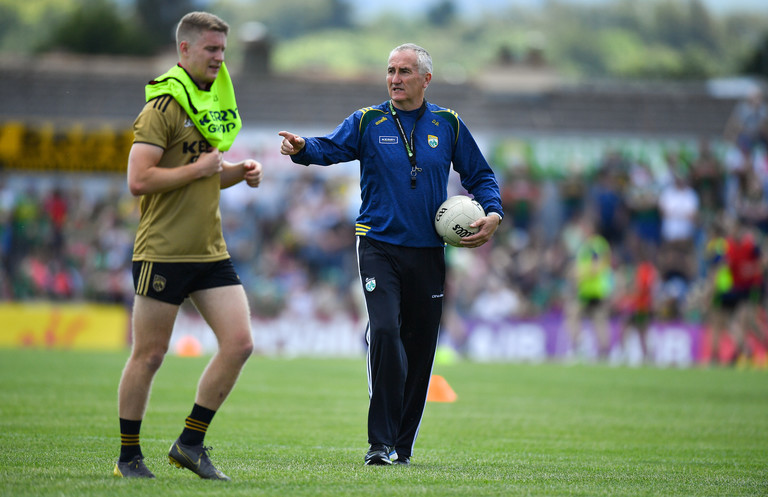 Speaking to Balls.ie after that league final, Mayo star Jason Doherty made a shrewd prediction. Kerry would improve and former Mayo backroom team member Donie Buckley, who returned to Kerry earlier this year, would be key to it.

There's no doubt, Donie was excellent for us and Mayo football. I have a huge amount of respect for him. We knew well that there are elements of Kerry's game that will improve further because of him. There's plenty of nights doing box-drills tackling that I'm sure the Kerry boys are going through now!

It came to pass.

Hands were all over that performance. Pressing high on clarkes kick out was the building block of that win.

As aforementioned, attack and defence are interlinked. David Clifford is generally key to the former aspect, but one man is key to both. 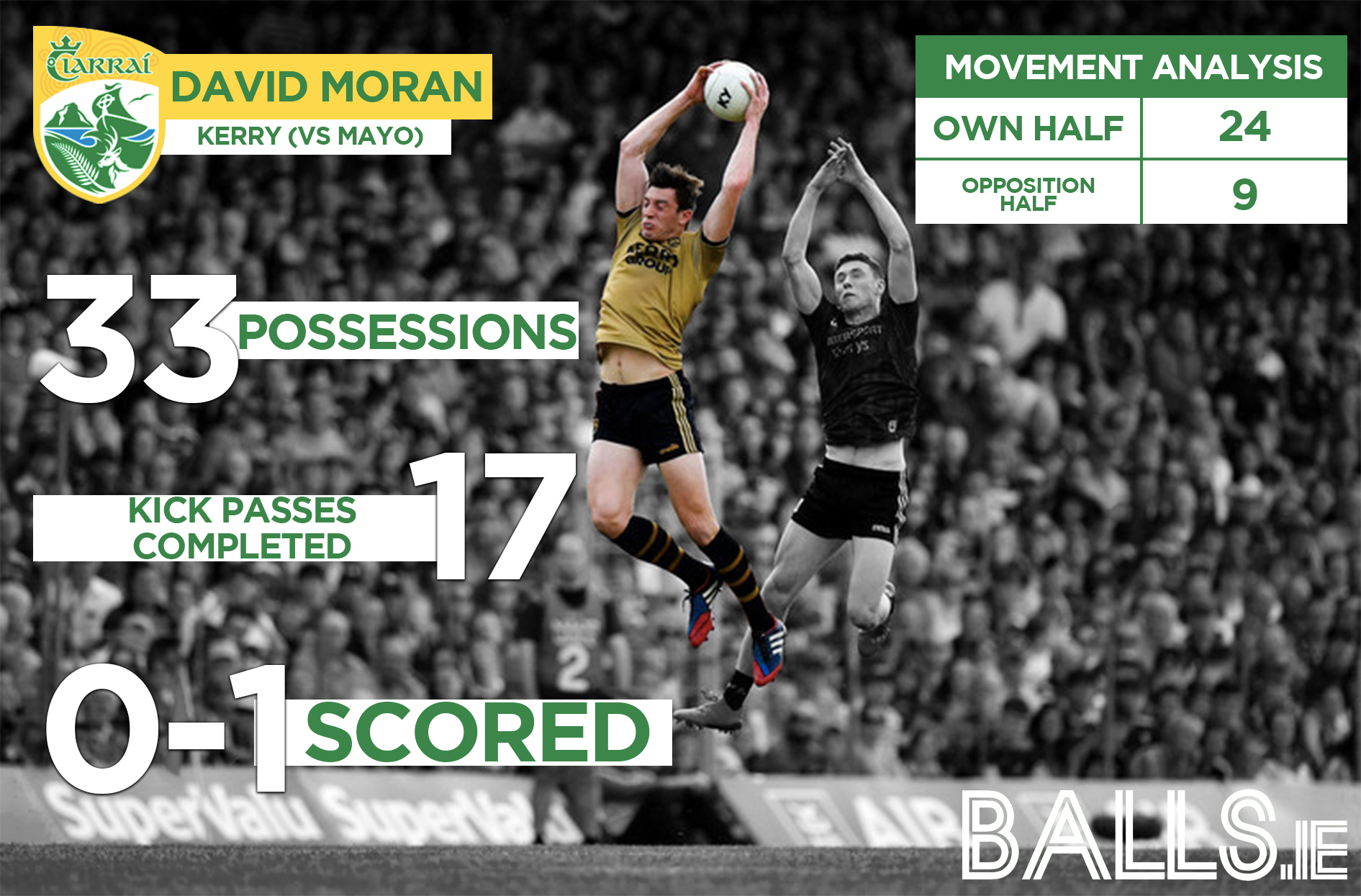 Once again if you revisit that league final, Mayo's man of the match was Aidan O'Shea. He finished that day with five turnovers, 30 possessions and won four kick-outs. On Sunday he enjoyed 34 possessions, one more than David Moran. But their effectiveness on both sides of the ball was profoundly different.

If the key to defending is regaining possession, the most important aspect is defending kick-outs. Kerry's zonal press forced David Clarke to go deep and here David Moran shined as his team won seven of 11 re-starts that went long.

However, limiting Moran's contribution to fielding would be a significant error. This was a masterclass of midfield play on both sides of the ball.

For example, in the first ten minutes, both midfielders conceded a free. Compare and contrast.

Mayo attack down the wing with Vaughan. 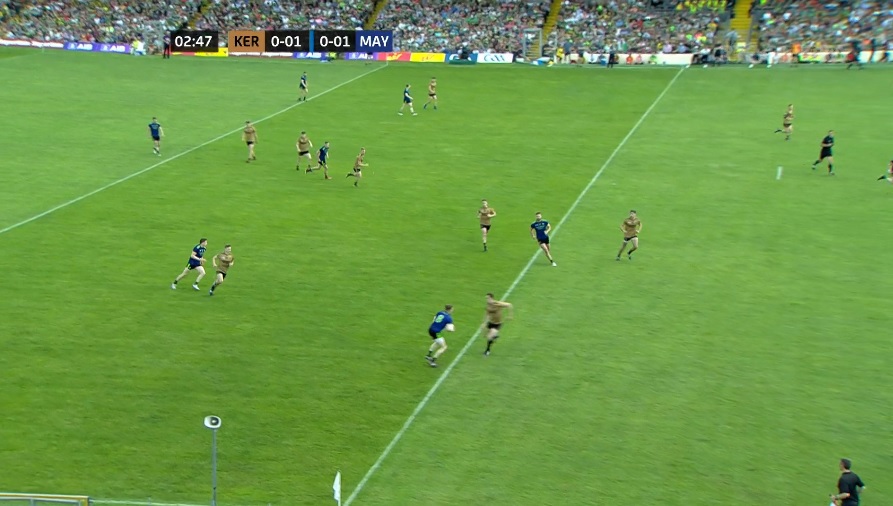 Moran puts a hand on Vaughan's shoulder and concedes a free in a non-scorable position, slowing down the attack. 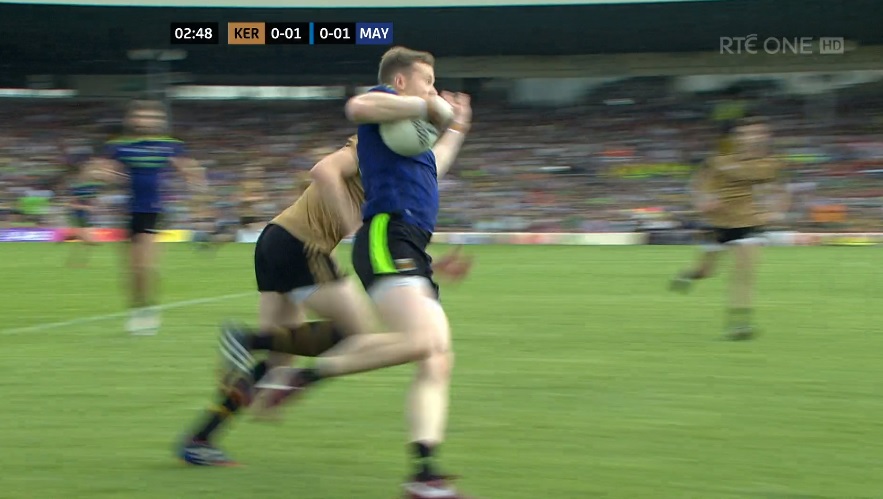 Vaughan takes a quick free and Mayo continue to attack. 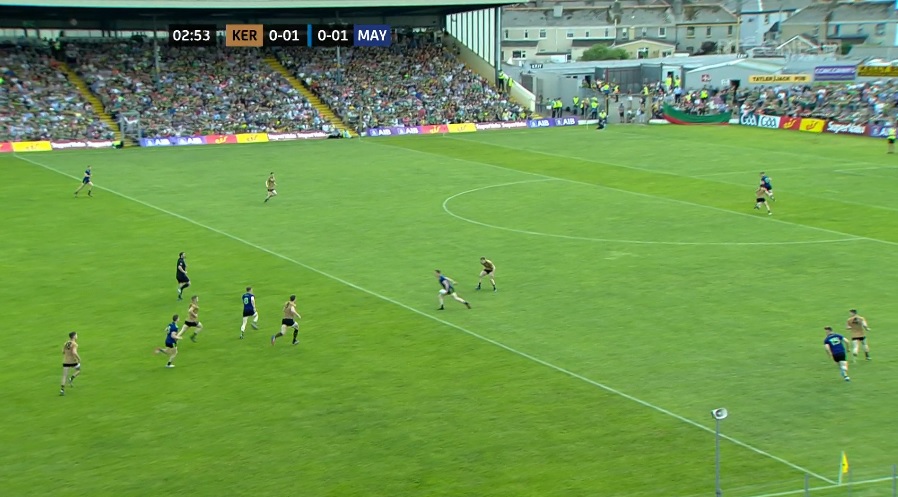 White dispossess Vaughan and the first stage of defence is complete. 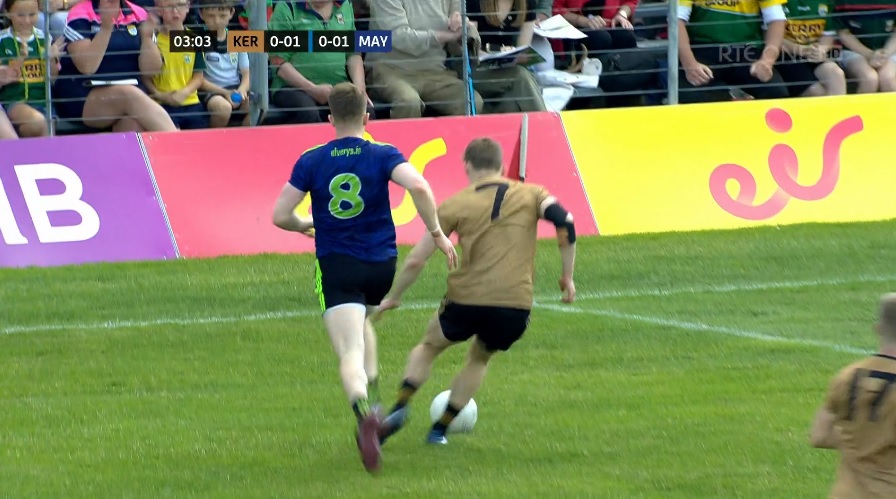 From defence to attack, Moran gets the ball and is immediately looking for an option out the field. 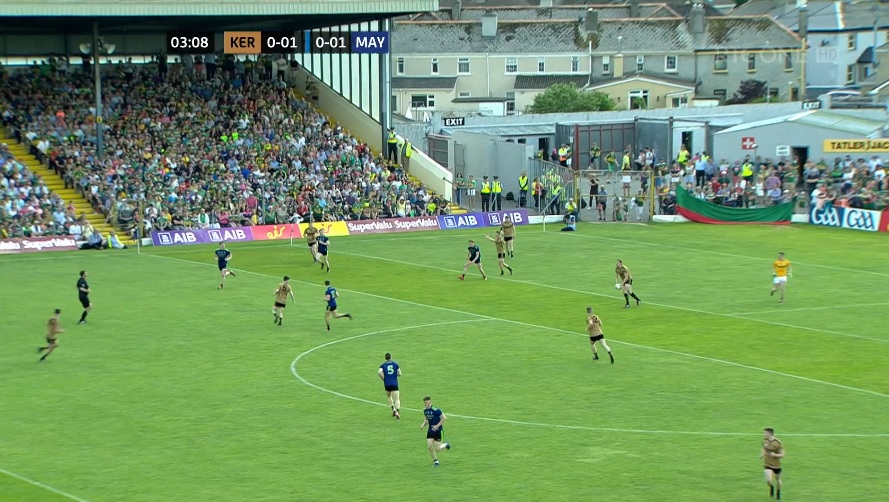 Geaney is out in front and Moran hits a perfect pass. 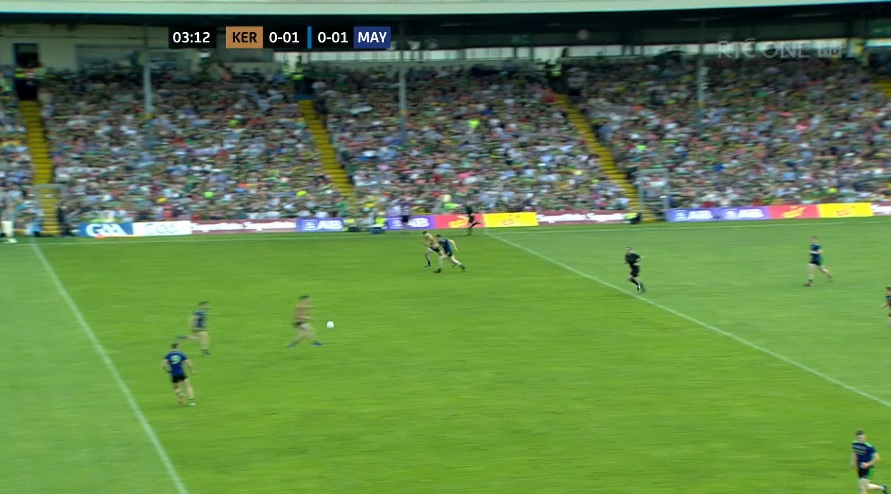 Paul Geaney exchanges a hand-pass one-two with James O'Donoghue and now the transition is complete. 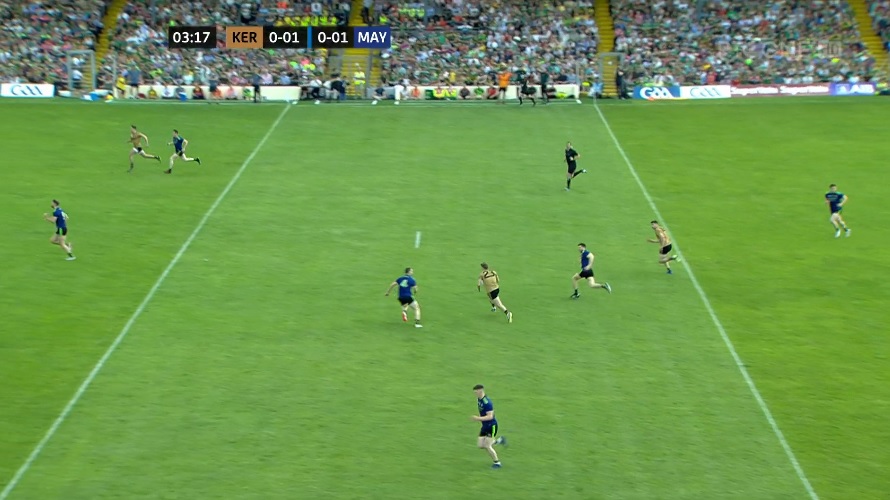 Geaney can now kick an accurate ball inside to Clifford. 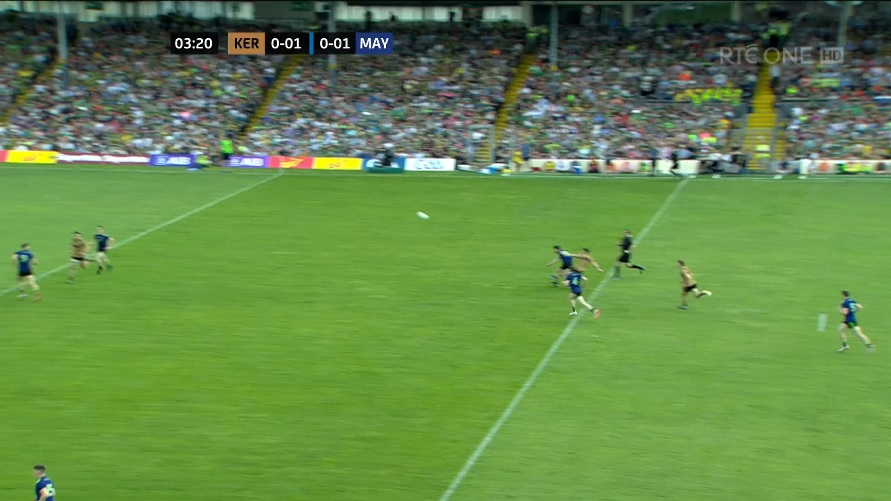 The Fossa club man does the rest. 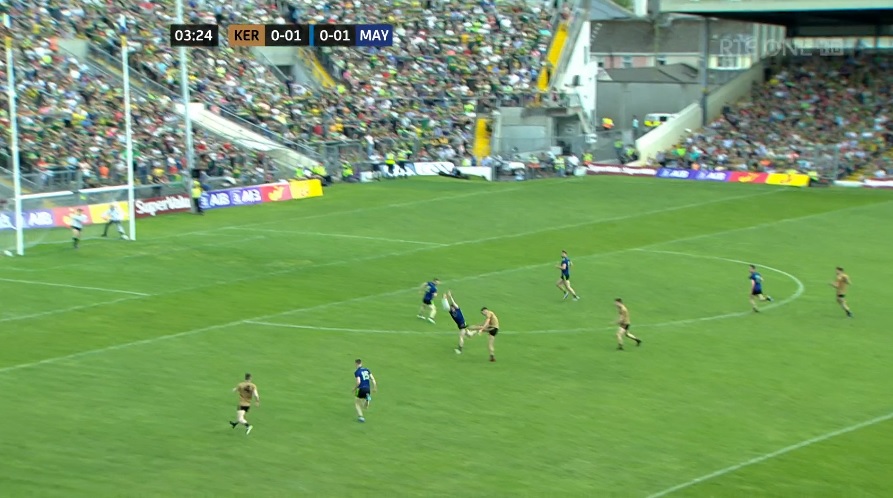 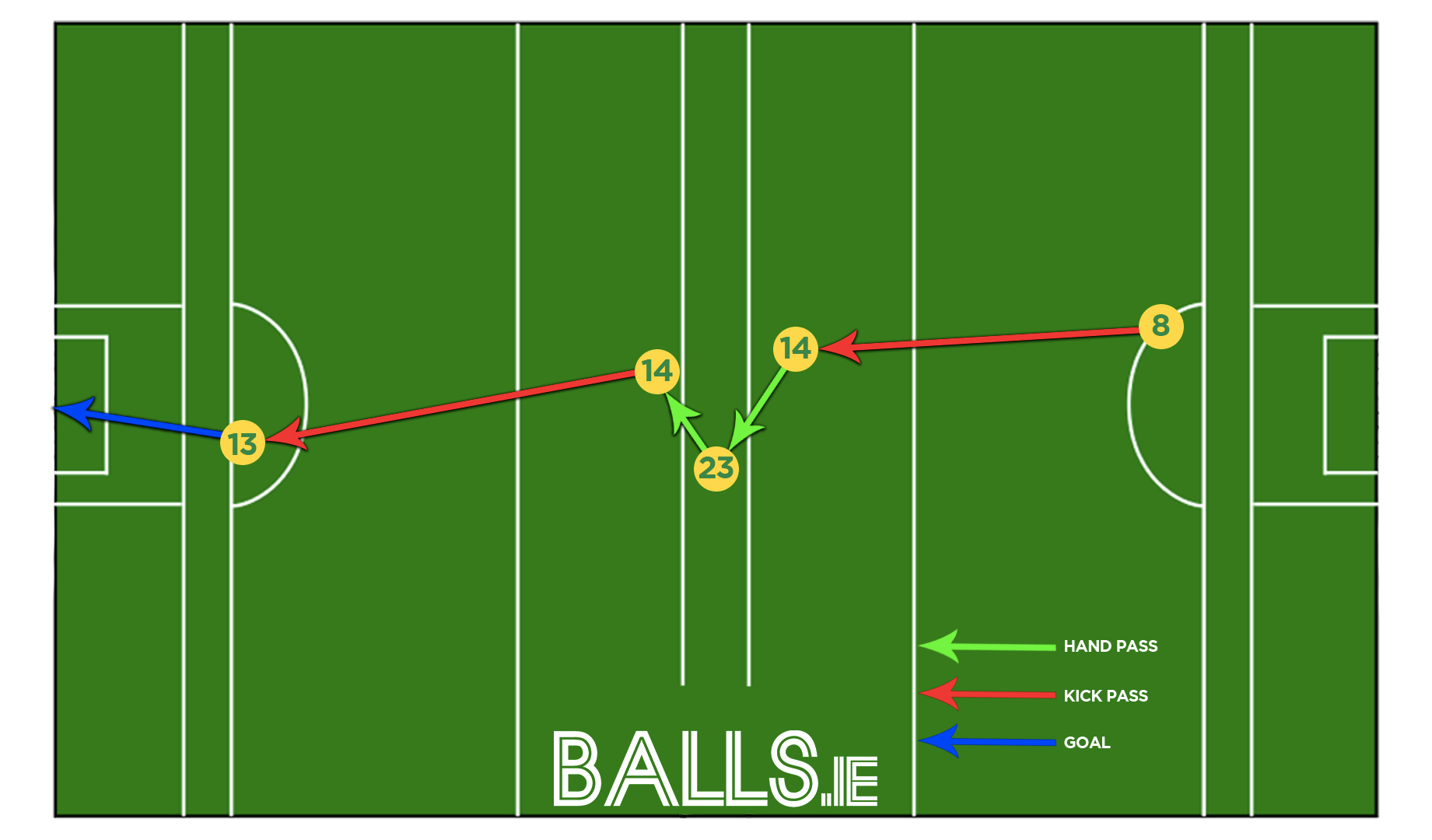 Throughout the game, Moran was the pivot. Whereas Mayo play through all five zones, Kerry played a quicker and less taxing game through three. Much of this was down to their midfield maestro and his disruption prowess. He delivered 11 kick-passes in the first half with 100% accuracy and added a score on top of it all. 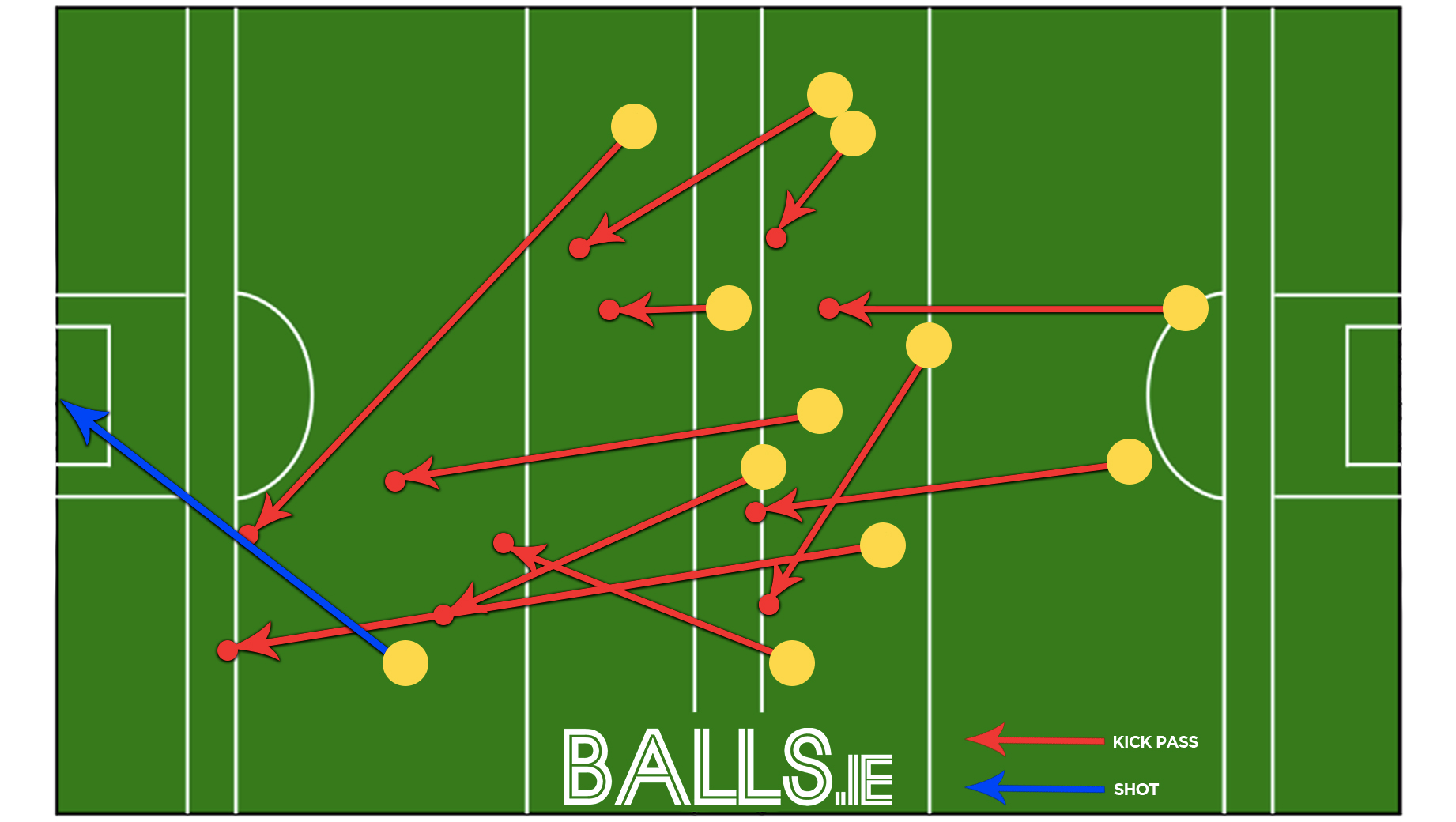 Only twice in the game did Moran's kick-pass travel backwards. This was for a free back to Shane Ryan and his cross-field pass in the lead-up to Paul Geaney's goal. He was only dispossessed once, but did foul the ball once and carried out of play in the last minute.

On the other hand, Aidan O'Shea's early defensive intervention led directly to a conceded score.

O'Shea misjudges a ball and fails to intercept it. 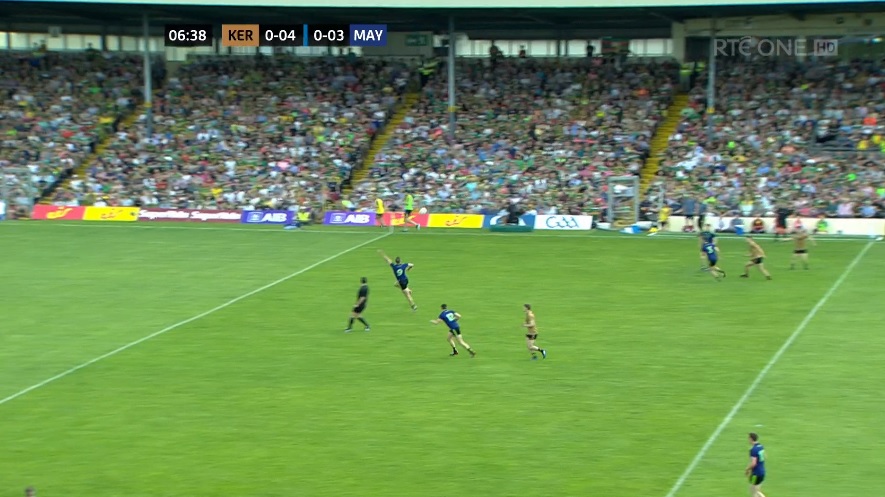 He drops back within the '45 as Paul Geaney starts his run. 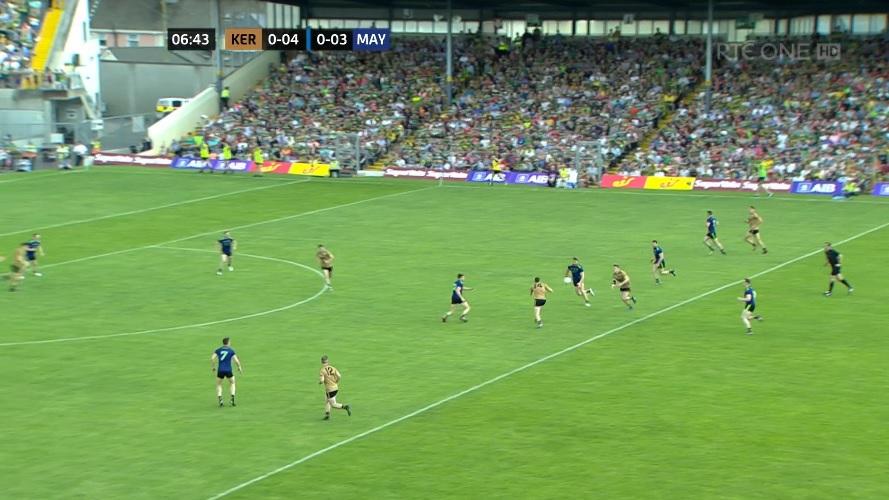 He overcommits and gives Sean O'Shea a straightforward free. 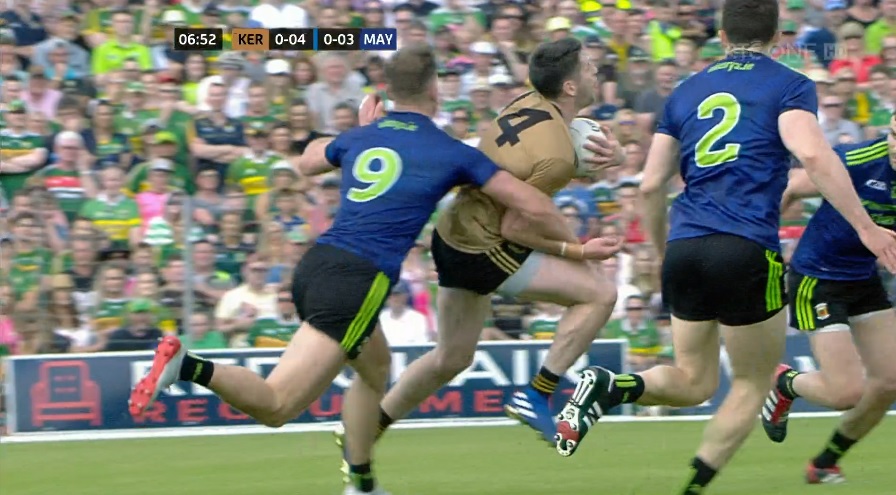 Four games in as many weeks clearly did Aidan O'Shea no favours and on top of that James Horan will rue letting Moran have such a long leash during the first half. The Kerry midfielder was allowed to drop deep and distribute as his ease as Mayo's mobile middle third anticipated dropping deep instead of pressing up.

It was clear that despite the general reaction to the league final loss and Munster final, Kerry trusted in their current system to come good. Speaking post-match, David Clifford labelled it all, "peripheral media pressure. We were happy enough with the way we were going in training."

Peter Keane had a similar message: "Some of them got a bit of grief after the Munster final. Cork went out yesterday and kicked 1-17 against Dublin. That was a pretty good score to put up..."

The big question for Peter Keane is whether to stick or twist next week in Croke Park. Moran will thrive with freedom, but so to will Michael Murphy. Shane Enright could live with the Glenswilly man on the floor but in the air, it is a different matter entirely.

They may not have marked each other but Moran got the better of O'Shea in the middle third battle. With Michael Murphy waiting in the wings, another heavyweight contest is scheduled for next Sunday.

GAA
4 days ago
By Mark Farrelly
Quiz: Name Every All-Ireland Football Final Man Of The Match This Decade
26

GAA
6 months ago
By Maurice Brosnan
'If I Took A Break But Stayed Here, You Don’t Get Away. You Would Hear Talk Constantly'
4

GAA
4 days ago
By Mark Farrelly
Quiz: Name Every All-Ireland Football Final Man Of The Match This Decade
GAA
6 months ago
By Maurice Brosnan
'If I Took A Break But Stayed Here, You Don’t Get Away. You Would Hear Talk Constantly'
GAA
6 months ago
By Maurice Brosnan
Jason Sherlock Addresses Inaccurate Reports That He Had Left The Dublin Set-Up
Popular on Balls
Football
52 minutes ago
By Gary Connaughton
Belarus President Allows Sport To Continue & Recommends Crazy COVID-19 Cure
2

GAA
2 hours ago
By PJ Browne
Watch: GAA Gold - Galway Vs Limerick In The 1980 All-Ireland Hurling Final
Football
3 hours ago
By Michael McCarthy
Our Readers Have Spoken: It's Time To Show Italia 90 In Full