There were just over three minutes of normal time to play in Sunday's All-Ireland camogie semi-final between Galway and Tipperary when referee Ray Kelly showed Dervla Higgins a red card.

The Galway corner back looked astonished. She had good reason to be so, as it appears to have been a case of mistaken identity.

Following the four-point victory for Galway, RTÉ cameras identified the incident which seems to have resulted in the card. Though, it appears Galway number six, Emma Helebert, was the culprit, rather than their number four Higgins.

While laying on the ground, Helebert appeared to swing her hurley and strike a Tipperary player.

Dervla Higgins was shown a straight red card in Galway's win over Tipperary - but should she have been? #RTEGAA pic.twitter.com/PF6GLnYlUr

"I just hope the RTÉ cameras can clear that up for us.

"I thought Dervla was having a super game. I just hope that red card is rescinded, and I hope it is a case of mistaken identity." 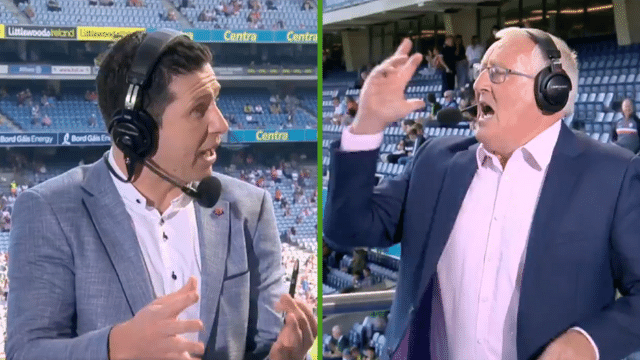 GAA
3 months ago
By Daragh Ó Conchúir
Captain Steps Off Bench To Hit Late Winner For Cork Against Kilkenny
GAA
1 year ago
By Maurice Brosnan
'Sport Has always Been An Outlet Regardless Of How Stressful The Job Has Been'
GAA
6 years ago
By PJ Browne
Camogie Association Comes In For Further Criticism Over Scheduling Of Quarter-Final
Popular on Balls
GAA
1 day ago
By PJ Browne
Thought Of Absent Brother Heightened Emotion In Graeme Mulcahy
Football
1 day ago
By Gary Connaughton
Watch: Ex-Liverpool Man's Intentional Booking Was Peak Football Gamesmanship
Football
23 hours ago
By Gary Connaughton
Watch: Two Players Sent Off Amid Ugly Scenes In Porto-Atletico Thriller
Football
1 day ago
By Gary Connaughton
Sebastien Haller Breaks Remarkable Champions League Record Against Sporting