If you look back at the history books of Gaelic football in Westmeath, it would be impossible to avoid the name of Dessie Dolan. The Garrycastle man has been part of some unbelievable highs, and heartbreaking lows, in the county over the past 20 years.

In his prime, there were few players in the country that could match his ability. Dolan was the type of star forward that every team craves, but very few ever have the privilege of possessing.

Now 40-years old, the Garrycastle man played his final ever game this afternoon. It was not the ending he would have wanted, with his club beaten convincingly by Ballyboden in the Leinster Club Championship.

He kicked a remarkable seven points, getting a standing ovation from the Mullingar crowd as he left the pitch in the second half. 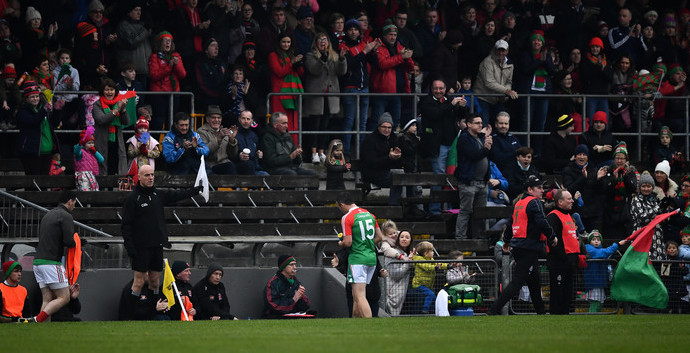 It is not the ending he would have wanted, but he has experienced more success than any player to come out of Westmeath. Before Dolan came on the scene, Garrycastle had never won a county title.

Their victory this year was their eighth. That run also includes one provincial crown, and an All-Ireland final appearance. They came agonisingly close to winning on St Patrick's Day of 2012, with Crossmaglen lucky to escape with a draw.

The defeat in the replay was no doubt one of the lows in Dolan's career, but it wasn't the only one. He missed a 20 metre free in a a game against Meath in 2003 as Westmeath blew the opportunity for a first ever Championship win over their neighbours.

The later years of his inter-county career lacked the same success as the early days, with Westmeath having a reasonably barren at the turn of the decade. Despite this, Dolan continued to star.

His crowning achievement will always be that Leinster win in 2004. That was a special year for Westmeath. It will go down in folklore as the county's greatest hour, and Dolan was nothing short of extraordinary in that campaign. His performance against Wexford in the Leinster semi-final was one of the greatest we have seen in a maroon jersey.

While he did receive one All-Star, Dolan was overlooked far too often on a national stage. The truth of the matter is were he from a more successful county, he would rightly have been held up as one of the best players in the country.

Not that that will matter to him. You suspect he wouldn't trade that one Leinster title with Westmeath for any amount of trophies with another county.

While he retired from inter-county duty a number of years ago, he continued to soldier on with Garrycastle. The club is where it all begins, and ultimately where things end.

Having won a seventh county medal in 2014, for a while it seemed like Dolan would finish up on that tally. They got back to a county final for the first time in five years in 2019, pulling off a shock to beat a much fancied St Loman's side.

While provincial honours would prove a step too far, it was the ending the player could only have dreamed of.

The people of Westmeath will certainly wish him well in his retirement.

SEE ALSO: 'This Is What We Live For' - Brendan Maher Ends Monster Year With Munster Triumph