'It's Cut-Throat Over There. The Lad Sitting Next To You Is Hoping You're Injured'

A year-and-a-half after one sporting dream ended, Dessie Hutchinson realised another.

On October 13th, he was part of the Ballygunner team which won its sixth Waterford senior hurling title in a row by beating De La Salle. Hutchinson scored 1-3 from play for a team which also featured his two brothers, JJ and Wayne.

"Unreal to be fair, still trying to come to terms with it after last weekend. The celebrations were fairly heavy."

For most of Ballygunner's recent triumphs, he was 600km away across the Irish sea listening on WLR FM from a house in Brighton.

He spent five years with Brighton and Hove Albion before being released by the Premier League club at the end of the 2017/18 English season.

The 22-year-old subsequently returned home and signed with Waterford FC but has since decided to park soccer and get on with the next phase of his life.

"I think there were five or six of us (Irish players) there so we had that bond already, we done everything together so it was fine," says Hutchinson, speaking at the launch of the AIB Camogie and Club Championships.

But at the same time you're still competing against these guys and it's so cut-throat over there you wouldn't believe it. The lad sitting next to you is hoping you're injured for six months so he can get looked at more than you are.

It's a strange place to be and it's a strange industry. If you're after playing 50 or 60 games in the Premier League then you can kind of sit back and say, 'Right, I think I'll be okay for a while.'

For me, I came back here and played for six months and thought to myself that the only way of progressing would be to get a move back across the water. At the time, it wasn't for me.

Then you look at the League of Ireland, and it's no disrespect to the league or anything like that but you're never going to earn enough money or become that high profile player to be able to relax on it when you're finished playing.

For me now it's pretty much done, well it is done. I've no aspirations to go back anytime soon or anything like that.

It was a case of getting a career change while I'm young rather than wait until 27, 28 when it could be too late for me.

A couple of years after Hutchinson joined Brighton, Aaron Connolly - now one of Irish football's brightest prospects - arrived at the club. 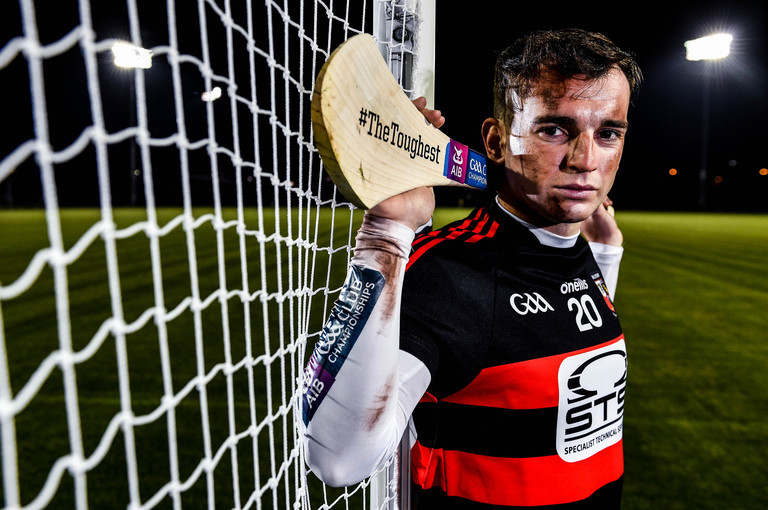 Ballygunner hurler Dessie Hutchinson poses for a portrait at the launch of the AIB Camogie and Club Championships. Photo by Sam Barnes/Sportsfile

"I took him in under my wing a small bit over there," says Hutchinson.

"Obviously he came from a GAA family himself so it was nice. We had another lad from Waterford, Jayson Molumby, his brother has played a lot of hurling.

"Actually the first family I stayed with when I moved over, Aaron moved in with them. We would always go for dinner.

"When I was going over, I went with a lad from Bray, Dylan Barnett - he is playing with them now. So I was lucky I had him. For someone like Aaron, who was coming on his own, he needed to be looked after a bit.

"Hopefully he is doing that with some of the young lads coming over now. Especially for young players coming over from Ireland now, they are going to look at him and want to be like him.

"It is important he stays grounded and speaks to the lads like he was when he was coming over. It is so important, that first couple of months being over there. You either want to go home or stay there - it is one or the other."

While away, hurling remained on Hutchinson's mind. He and the other Irish players at Brighton would head down to the beach or a back garden for a puck around.

"All the time over there we'd have a tap around now and again. I don't think the neighbours knew what was going on. We introduced it to a few of the English lads too.

"One lad, Ben Barclay, he took it up - he loved it. He actually came over to visit me there last summer. I took him to the match, things kicked off in the match, and it was abandoned and he thought 'What the hell is this all about?'."

Hutchinson began training with Ballygunner following their Munster Championship title win last year. Getting up to the required level was tough. "I have a natural enough touch," he says. "It was just about getting used to the game situations, taking the hits."

In February, he was called up to the Waterford senior football panel by manager Benji Whelan. He played in the league, came on as a sub against Clare in the Munster Championship and started the qualifier against Westmeath. It was an experience Hutchinson enjoyed but hurling is his sporting priority.

Outside of sport, getting a third level qualification is his next big step. He hopes to start a course as a mature student next September and is working at a warehousing company in Waterford while he waits.

"When I was in England the education side wasn't great. When you come home you're behind a lot of people your own age that have gone through college. A lot of lads my age have now finished college but that's the aim, it's to get back to college, yeah.

"I'm not 100 per cent sure yet but I'd be looking at sports science or teaching, something down that line, maybe a business management course. I still have a little bit of time to think about it and make sure it's the right one."

In the quarter-final of the Munster championship, Ballygunner will face Clare champions Sixmilebridge. That's on his mind but so is a spot in Liam Cahill's Waterford senior hurling panel.

"It's definitely something I've thought about," says Hutchinson, "and it's something I want to do so hopefully that will come in its own time.

"At the moment I'm just concentrating on Ballygunner and going as far as we can in that. After last year we were so close to getting to Paddy's Day and we want to get to the All-Ireland final this year but we know we've huge tasks ahead of us first."

See Also: 10 Of Our Favourite Moments From The Weekend's Club GAA Action

Hurling
1 day ago
By Luke Delaney
How To Watch Galway v Dublin In Leinster Clash
GAA
1 day ago
By Luke Delaney
How To Watch The Tailteann Cup In Cup's First Weekend
GAA
1 day ago
By PJ Browne
Kerry Star Annoyed By Lack Of Access To County's Centre Of Excellence
Popular on Balls
Football
7 hours ago
By Eoin Harrington
Juan Mata Questions Manchester United Management After Dire Season
Golf
2 days ago
By Gary Connaughton
Padraig Harrington Glad He Didn't Have To 'Make A Decision' On Saudi Golf League
Football
1 day ago
By Gary Connaughton
The Frank Lampard Love-In After Everton's Survival Was Downright Bizarre
GAA
2 days ago
By PJ Browne
'It Came At An Awkward Time. I Didn't Think It Would Be So Bad'