Dublin footballer Diarmuid Connolly last night announced his retirement from the intercounty game. He served Dublin from 2007 until 2018, before seemingly stepping away from the game. Last year, however, he made a return to the panel, and played a big role off the bench as Dublin secured their famous five-in-a-row.

One of the most talented forwards of his or any other generation, Connolly's careers invited more controversy than most but on his day, he was the star of the show, and illuminated a pitch like few others. As Dublin became more success in the 2010s, witnessing Connolly on his day became more and more of a regular occurence and he arguably became the talisman for the Dublin team between 2014 and 2016.

In a career so glittered by incredible moments and skills, it's a strange thing that Diarmuid Connolly only won two All-Star awards, in 2014 and 2016.

As well as his incredible intercounty record of six All-Irleand titles and ten Leinsters, he also led St. Vincent's to two All-Ireland titles, and at 33, still has a huge amount left to offer in the club game.

The Dublin Career Of Diarmuid Connolly:

Already on the senior football team, Connolly was a dual star at U21 level, playing for Dublin the 2007 All-Ireland final against Joe Canning's Galway. His key goal against Wexford in the Leinster semi-final was instrumental in them winning that game and his Leinster medal at the grade. 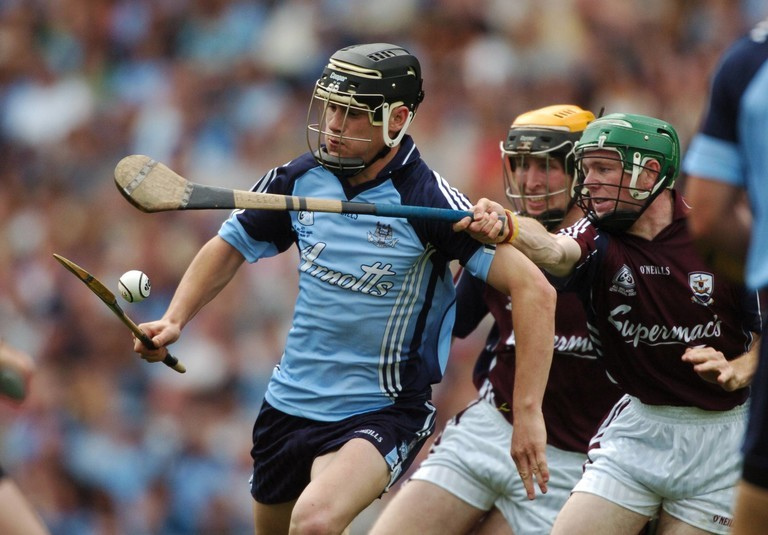 By 2011, Connolly was well established on the senior football team under Pat Gilroy. Their young team was attempting to end a 16 year wait for Sam Maguire. Their toughest test was arguably the super defensive Donegal side coached by Jim McGuinness. Their cause wasn't helped when Connolly was red carded. 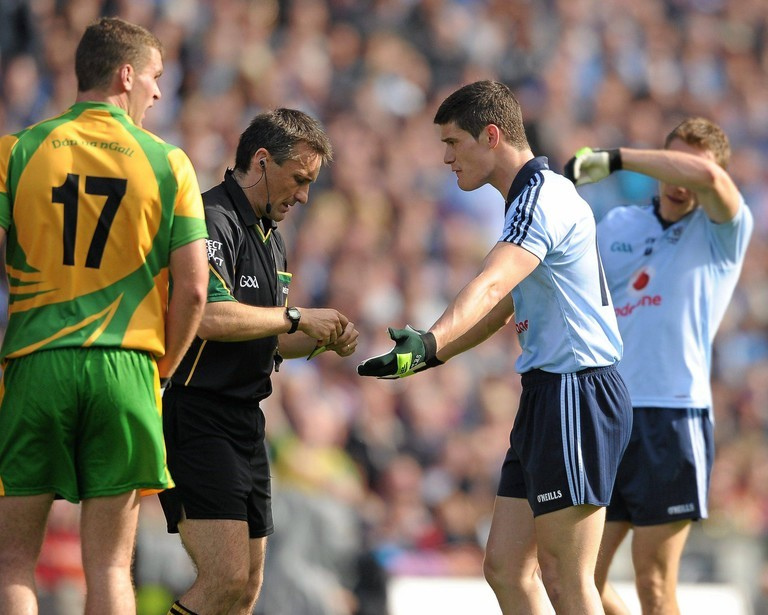 Dublin scraped though though, and a few weeks later, won a thriller with Kerry to end the famine. Connolly lifted Sam Maguire for the first time and picked up his first of six Celtic crosses. 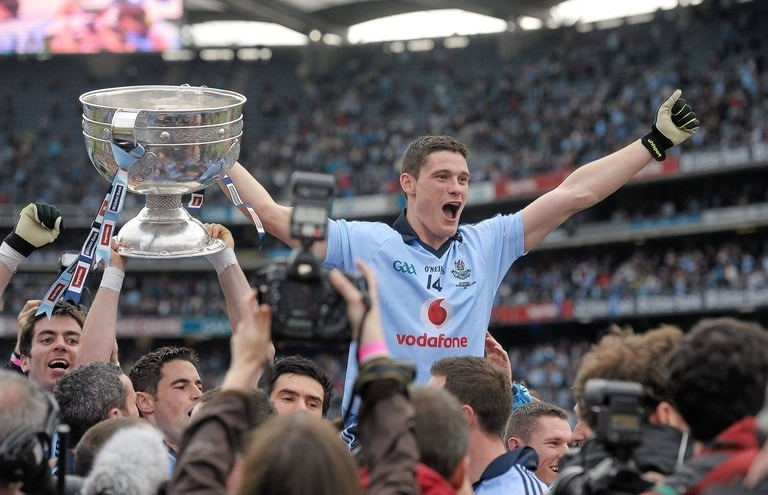 A rivalry with Mayo that would span the rest of the decade was born in 2012. Mayo would come out on top that year, though it would be the last time. 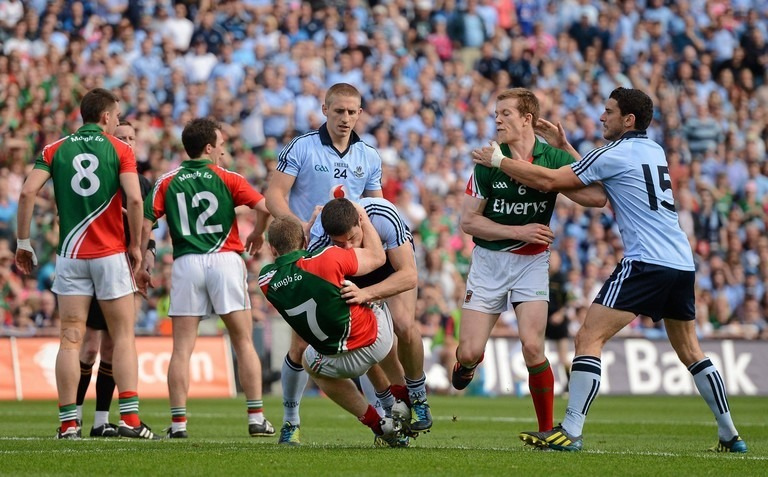 Dublin were back in 2013. This Connolly point, one of four on the day, sealed things against Kerry in the semi-final, in possibly the greatest game of football ever played. 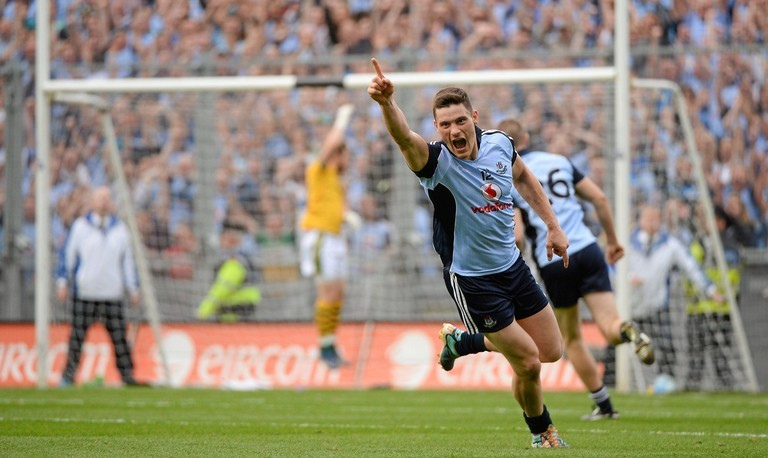 In the final, it was Mayo again, and this time Diarmo wasn't be outdone. 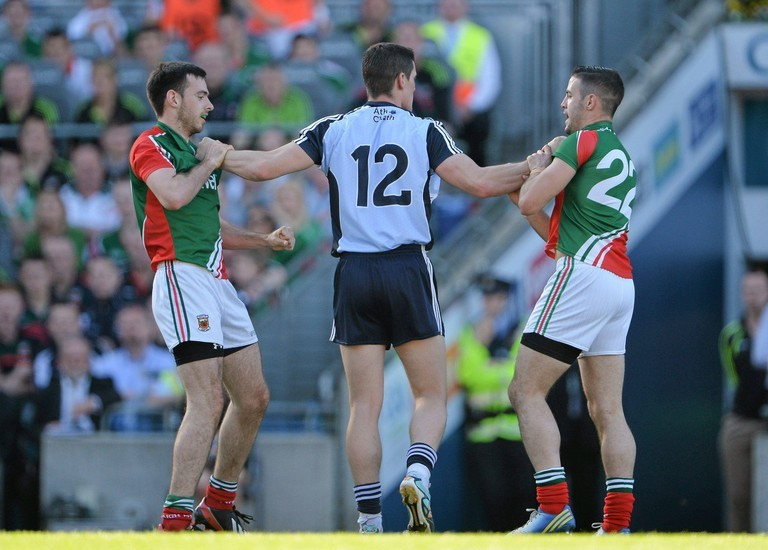 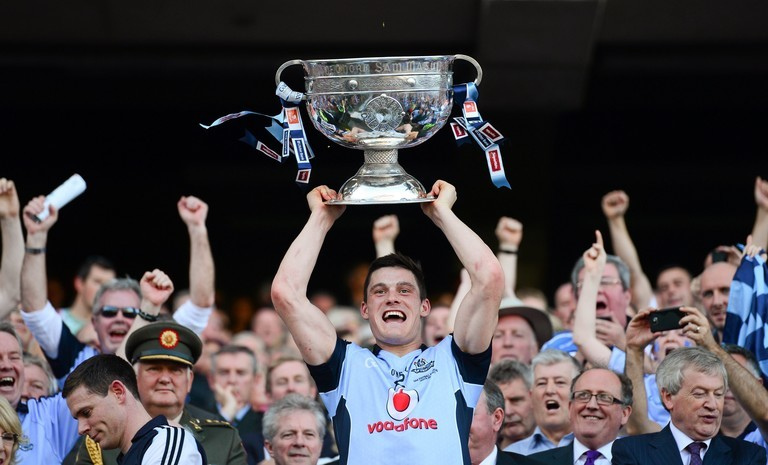 The following year was a frustrating one for Dublin. They didn't retain their title due to an outstanding performance by Donegal in the All-Ireland semi-final. For Connolly though, it was arguably the day he established himself as Dublin's key forward. He scored five points on the day, and won his first All-Star award. Dublin have not lost a Championship game since. 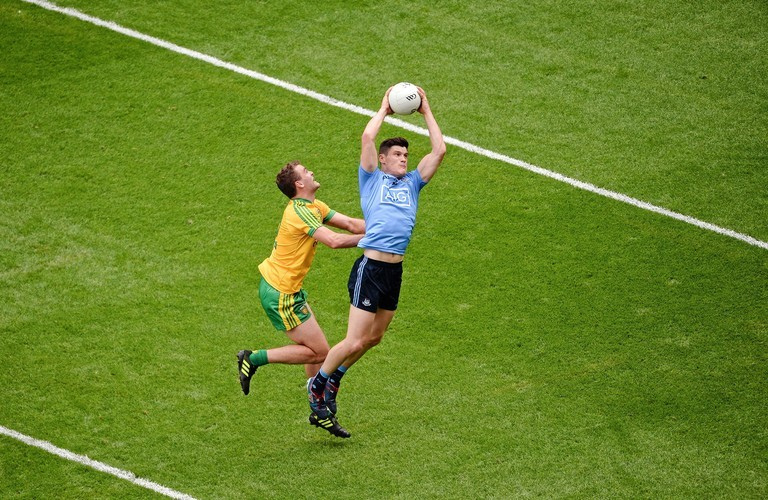 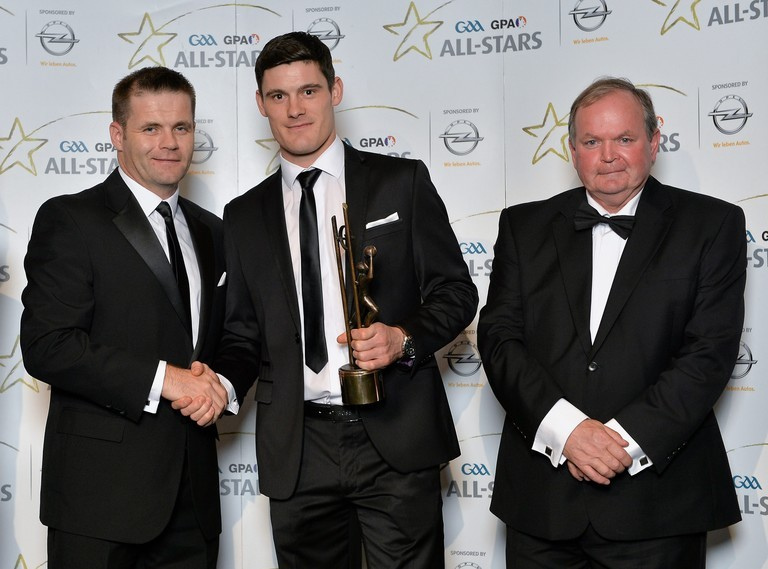 In 2015, Dublin and Mayo engaged in another war, and once again, Connolly was at the centre of it all. After scoring a goal early in the game, he was sent off late on for an incident with Lee Keegan. Dublin would go on to draw the game and Connolly's controversial DRA appeal was successful, meaning he lined out in Dublin's replay win. 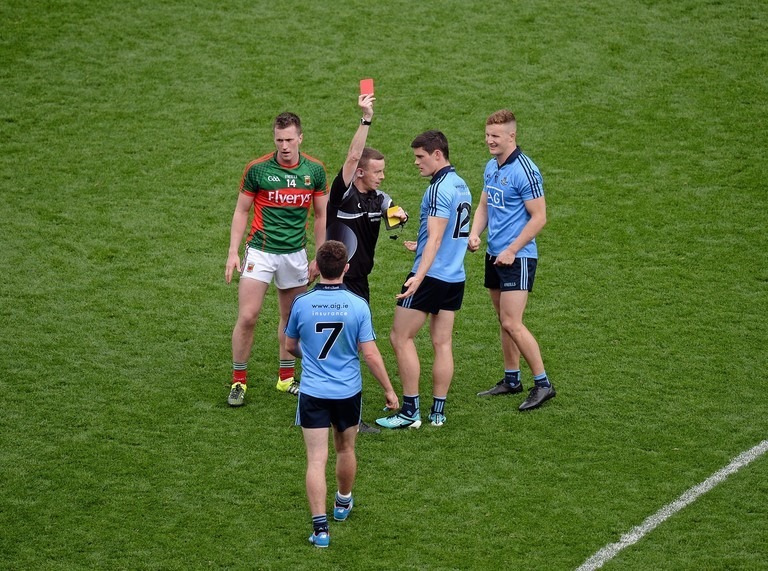 Their win in the rain over Kerry that year was the probably least memorable of Dublin's final wins in the 2010s, but it was also the first of the five-in-a-row. 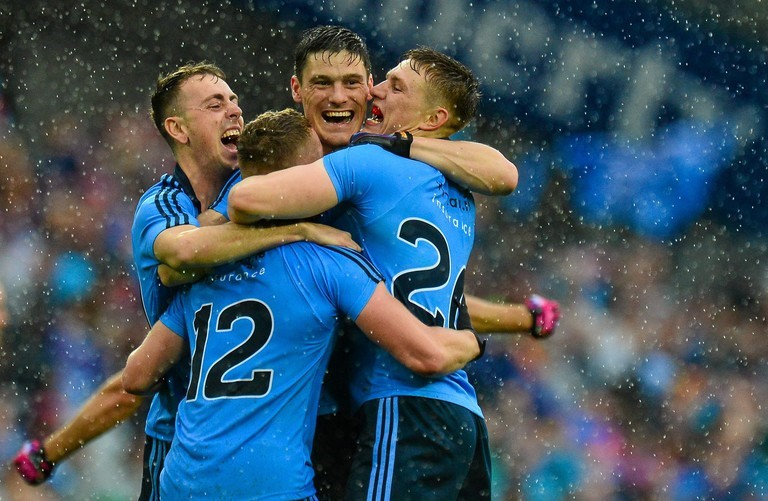 Dublin needed two attempts to get past Mayo again in 2016. They were lucky to draw the first day with Mayo remarkably scoring two own goals in a low scoring game.

Connolly's rivalry with Mayo's Lee Keegan became the story of the two games. In the first, both were yellow carded late in the game, after a tussle which left Diarmuid Connolly with one of the most iconic All-Ireland final looks of all time. 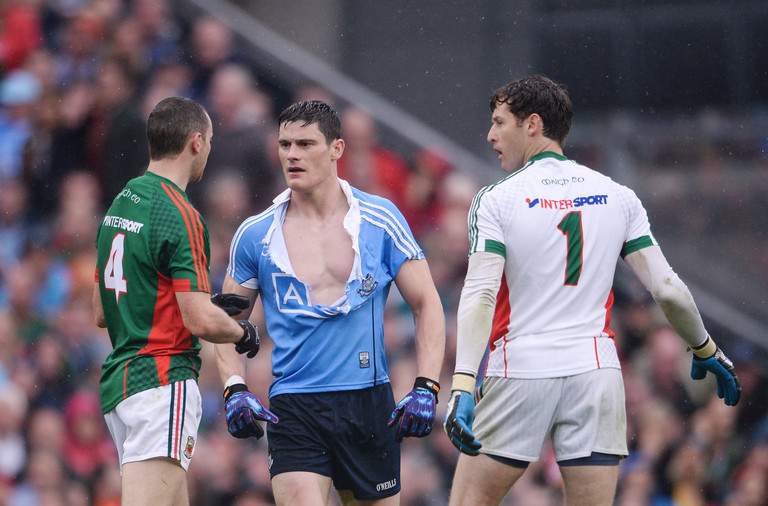 In the replay, the pair were at it again. 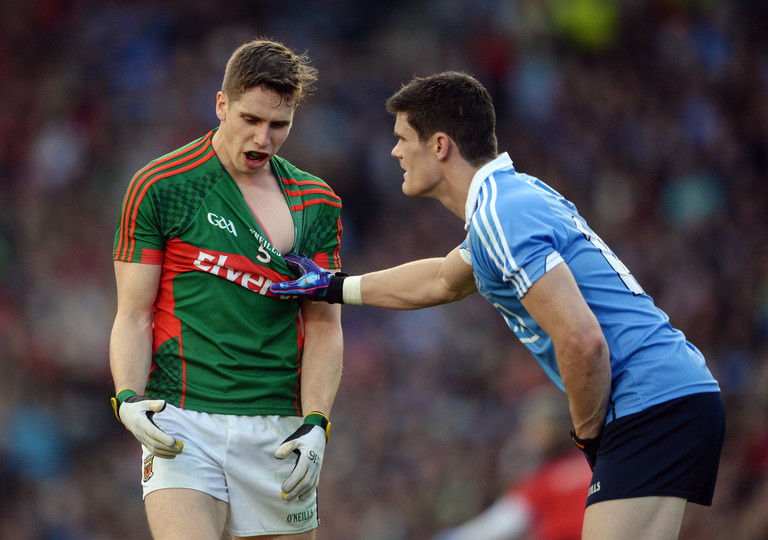 In the end though, Keegan, who had scored an early goal for Mayo, lost the battle, when he was black carded before half time for impeding Connolly.

Connolly would score a penalty in the second half that would ultimately prove crucial, with Dublin winning out by just a point. 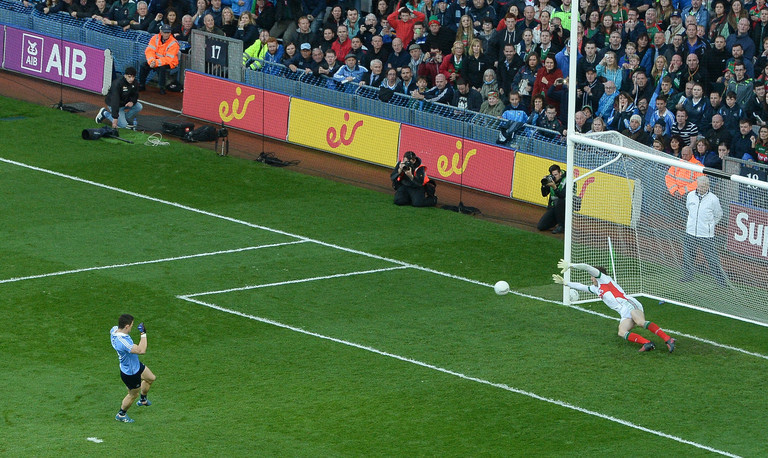 Keegan would go on to win footballer of the year, while Connolly won his second All-Star. It was the St. Vincent's man fourth All-Ireland, and he was part of the first Dublin team to retain Sam Maguire since 1977. 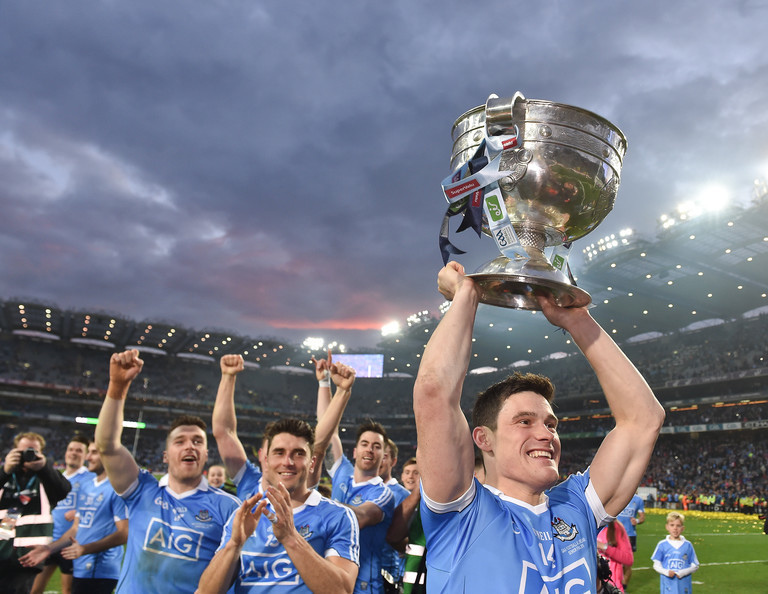 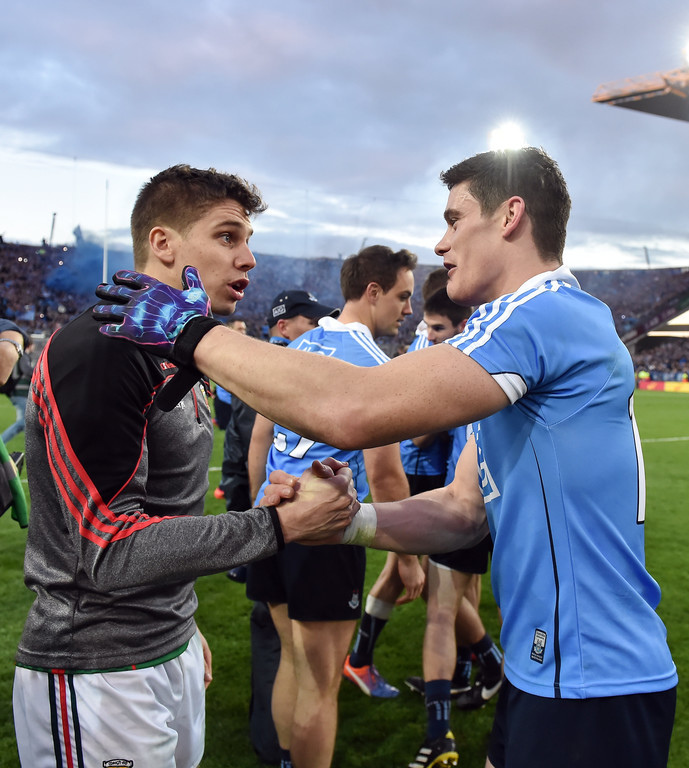 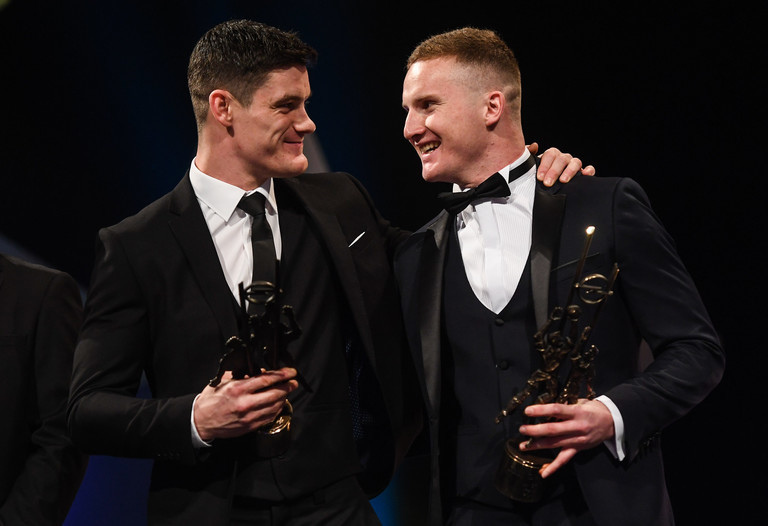 It didn't take long for the madness to continue in 2017. A Leinster quarter-final win over Carlow shouldn't have caused much trouble, but Connolly's light shove on a linesman caused chaos. Amid the furore, he was given a 12-week suspension. His manager, Jim Gavin, claimed it impinged on his rights as a citizen of the Republic. The Dublin fans were outraged, and Hill 16 donned a new banner in support of Connolly for the rest of the Championship. 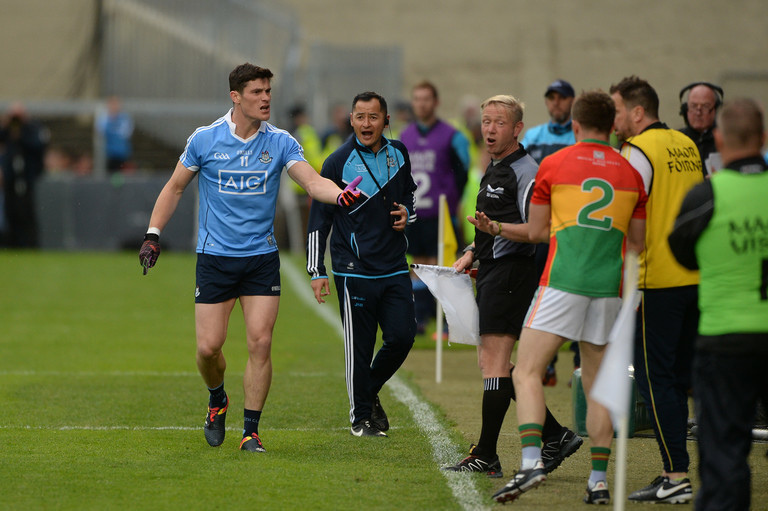 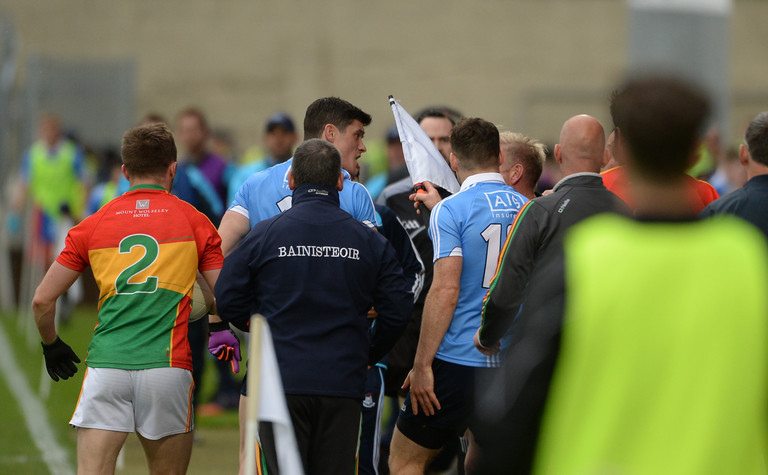 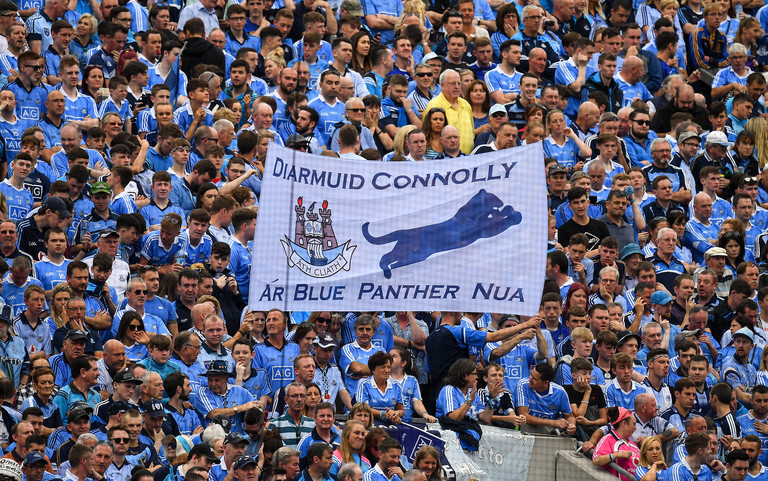 Connolly made his long awaited return for the All-Ireland semi-final with Tyrone. He remained on the bench for the last two games of the year, but came on at half time in the All-Ireland final, another one point win over Mayo. After a mad season, it was Sam number five for Diarmo. (Although he hadn't a clue how many he'd won!) 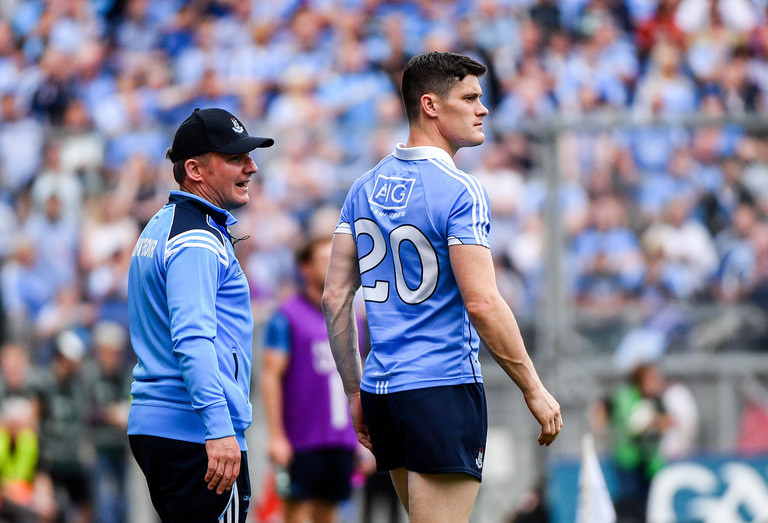 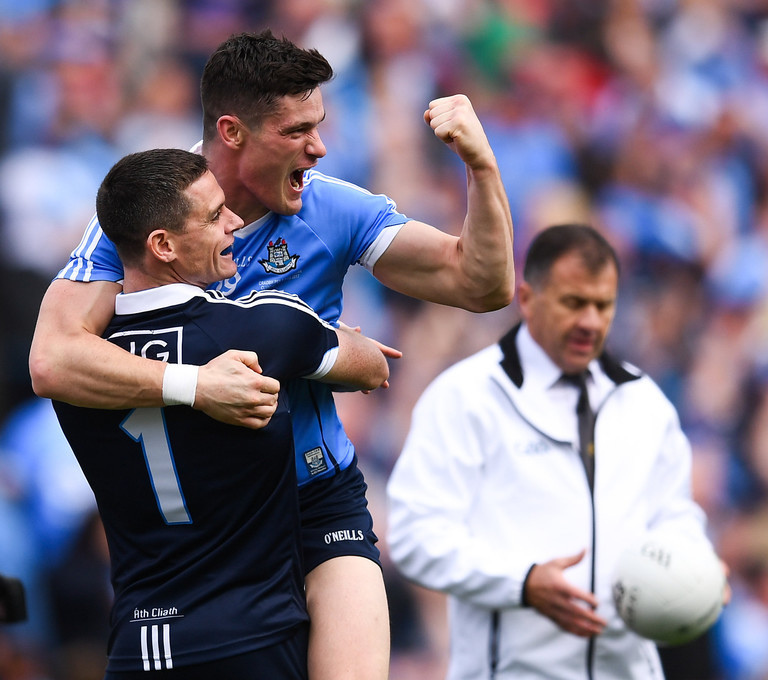 He surprisingly left the panel during the 2018 league and his Dublin career appeared to be over. During the 2019 Championship season though, Jim Gavin snuck into an interview that the 32-year-old had returned to training with the team.

In the Super 8 clash with Tyrone, Connolly returned to Championship action after almost two years out of the intercounty game.

He was black carded in the game, seemingly much to the amusement of him and Gavin. 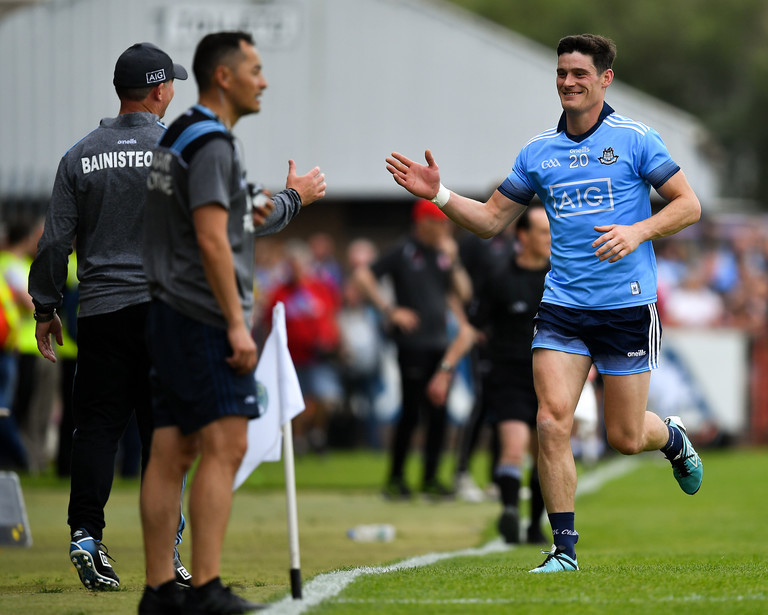 Against Mayo in the semi-final and in both All-Ireland finals against Kerry, Connolly was used off the bench. His last action for Dublin was to once again lift Sam Maguire for his sixth time, and help his teammates over the line for an historic five-in-a-row. 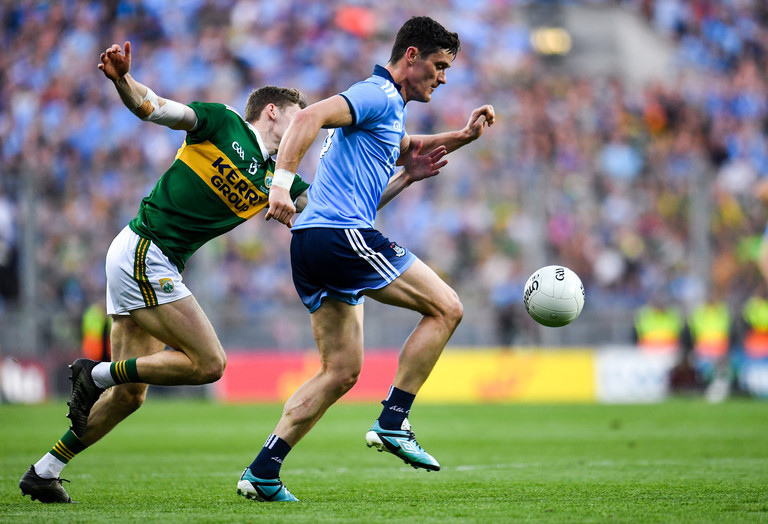 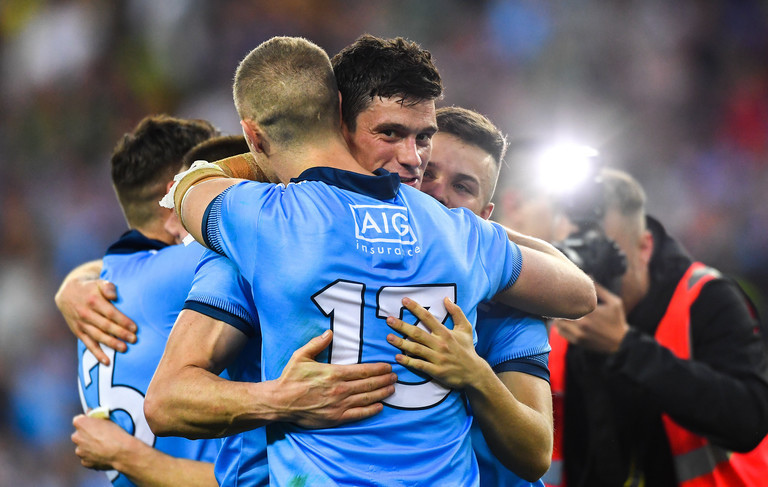 If Dublin are to make it six-in-a-row this winter, they will do it without Connolly. For 13 years, he established himself as one of the most controversial and talented footballers in the country, one of Dublin's best ever forwards, and a true cult hero of Hill 16.

SEE ALSO: Is Diarmuid Connolly Too Harshly Judged Within The GAA? 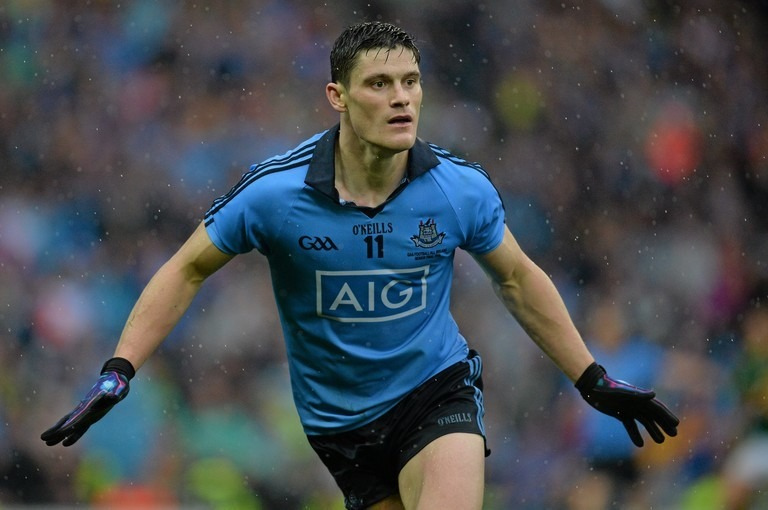