DJ Carey: I'd Rather Coach Kilkenny Under-14 Footballers Than Another County's Senior Hurlers

It's a little known fact - but DJ Carey played football for Kilkenny before ever he played hurling.

"I chose football at under-12 level. The footballers were playing the same day as the hurlers so I had to choose.
I didn't really know any different. My heroes at the time were the Kerry footballers because they were on television all the time. The likes of Mikey Sheehy, Pat Spillane and Eoin Liston - they were going for four-in-a-row at the time [in 1981] so I went with the footballers."

DJ is no callow 11-year-old anymore, but he's thrown his lot in with the Kilkenny footballers again now 35 years later. Carey rang Kilkenny chairman Ned Quinn after the county's minors were beaten by 71 points - 17-20 to 0-0 - by Wexford in April and between them, they decided something must be done.

Carey is now in charge of the Kilkenny under-14s and he spoke exclusively to Balls.ie about his new role.

I'd rather be involved with under-14 football with Kilkenny than be involved with senior hurling in any other county. I'm coming from a training session tonight where we had 50 young fellas at a training session. That's great. We had 14 or 15 footballs and we are just giving lads a chance. Hopefully when these lads step up to under-16 and minor - they will have a better base.

Obviously in a county like Kilkenny, hurling will always be the number one sport. But Carey doesn't think it has to be the only sport.

No young fella should be giving up a sport - and I mean any sport, be it hurling or football or rugby or soccer or whatever - until such time as they have to give it up. It's fair enough if a lad of 17 or 18 is on the minor hurling panel to make a choice then - because it's very difficult to keep more than one sport up at that level.

I may not be the best man to kick a ball or handpass a ball but I will do all I can to help these lads improve." 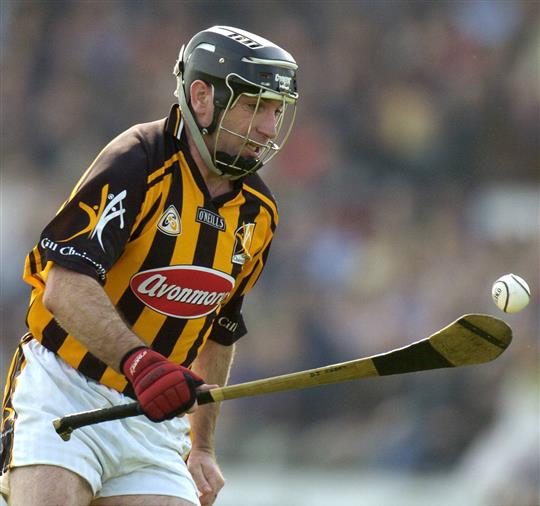 He may only have two months under his belt, but Carey has come to terms with the tactical differences between the two codes.

"In football - it's a really athletic game - you are up and down all the time whereas in hurling, you let the ball do the work. The ball travels 80 yards. So we have to look at that. Teams playing football will have fellas running off the shoulder and making dummy runs. In hurling you try and drive the ball as far as it will go and a lot of Kilkenny footballers do that too. So we are looking at changing that mindset.

For the time being now though, I'm just saying to the lads 'I'm going to travel down from Dublin and there are great men like Briain Ryan and Murt Lynch and we are all here for you.' We are happy to do it more if that's what's wanted.

There are great involved in Kilkenny football... like Brendan Sullivan and look at what David Herity is doing. It's not all bad bit it does need to improve.

I'm not promising we'll win All-Ireland titles or even Leinsters - I just want us to be competitive.

Hurling
1 year ago
By Balls Team
Ranking The Top 13 Hurling Points Ever Caught On Camera
GAA
1 year ago
By Balls Team
DJ Carey Explains Why He Retired For Six Weeks In 1998
GAA
4 years ago
By Maurice Brosnan
5 Talking Points From the Electric Ireland Fitzgibbon Cup Quarterfinal Stage
Popular on Balls
Rugby
1 day ago
By Colman Stanley
'I Think Munster Softened Them Up For Us': Sexton Not Carried Away After Clincial Leinster Win
GAA
2 days ago
By PJ Browne
Mayo's Padraig O'Hora Using Football To Promote His Real Passion
Rugby
16 hours ago
By Colman Stanley
'That Pace, That Intensity, That Organisation' All Black Legend Has High Praise For Leinster
The Rewind
1 day ago
By Eoin Harrington
Watch: Brilliant Dermot Morgan Dublin Segment From 'The Travel Show' Resurfaces