While the introduction of the sin-bin rule in hurling caused plenty of debate in recent months, a major alteration to the advantage rule has the potential to have a far more damaging impact on the sport.

Under the new interpretation of the rule, referees are encouraged to immediately whistle for fouls within scoring distance of the posts, as opposed to letting the play develop further.

The result over the weekend was a few very stop-start games, with players often pulled back to take frees despite having plenty of open space in front of them to play into.

It is something that has the potential to slow the game down immensely and is unlikely to be welcomed by supporters.

Speaking on RTÉ's Allianz League Sunday, both Shane Dowling and Dónal Óg Cusack slammed the introduction of the rule. Dowling labelled it as a 'disgrace', while Cusack said it was the worst thing to come into hurling since the ill-fated experiment with rubber sliotars in the early 200s.

He also wondered if these rule changes were implemented in hurling due to unrelated issue in Gaelic football.

Dónal Óg Cusack and Shane Dowling share their reactions to the impact the new rules made on the opening weekend of the Allianz Hurling League #RTEGAA pic.twitter.com/h2hiLuehbd

It full goes against the ethos of the game. The beauty of hurling is that it's so free flowing. We don't need to compare it to other sports, but you see some other sports that are very technical, they're very stop-start.

The beauty of hurling is that energy, that momentum. This rule is actually going to take all those things out of the game, the very things that you're trying to put into it.

It's just one of those things that the GAA has to change ASAP, put it down to a mistake during the pandemic, but it just has to change.

I'd be suspect that hurling is suffering because of some of the ills that exist in football.

For example, a lot of rules are after coming in that people aren't aware of. Look at the puck-out and kick-out rule that you can't wave your hands when a player is taking a puck-out.

I just think that as an Association, on too many occasions we treat both games in the same way when they are two very, very different sports...

That advantage rule is the worst thing that has been brought into the game since the rubber sliotar in 2003.

As Joanne Cantwell pointed out in the clip above, this rule is likely here to stay for now. Rule changes such as this one can only be implemented at congress, meaning the 2021 championship is set to be stuck this new advantage law.

Let's hope it doesn't have an adverse effect on this year's hurling. 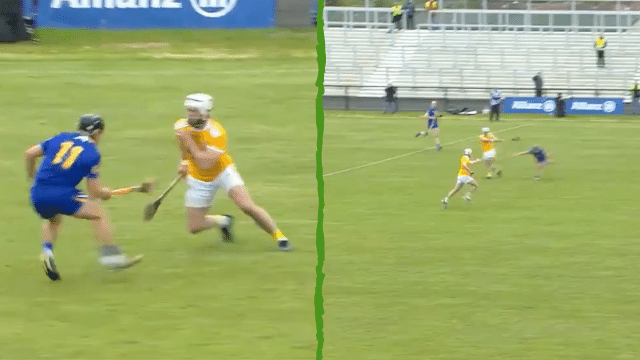 GAA
11 months ago
By Michael McCarthy
'If These People Have Their Way The GAA Will Be As Anonymous As The League Of Ireland B'
GAA
1 year ago
By Maurice Brosnan
Ger Loughnane Slams 'Pathetic Egos' Of McGrath And Cusack After Sunday Game Segement
GAA
1 year ago
By Balls Team
Cusack Interested In Cork Job, Addresses Sunday Game Reaction
Popular on Balls
Football
23 hours ago
By Gary Connaughton
Manchester United Legend Urges Club To Avoid Delcan Rice Transfer This Summer