Experienced Donegal Rein In Royals As Leitrim Tamed By Derry

The Division Two and Division Four National Football League titles will reside in the northwest for the next 12 months after Donegal and Derry left Croke Park with silverware this evening.

Declan Bonner's men staged a wonderful second-half comeback, inspired by captain Michael Murphy to overcome a Meath side who were equally as impressive in the opening thirty-five. 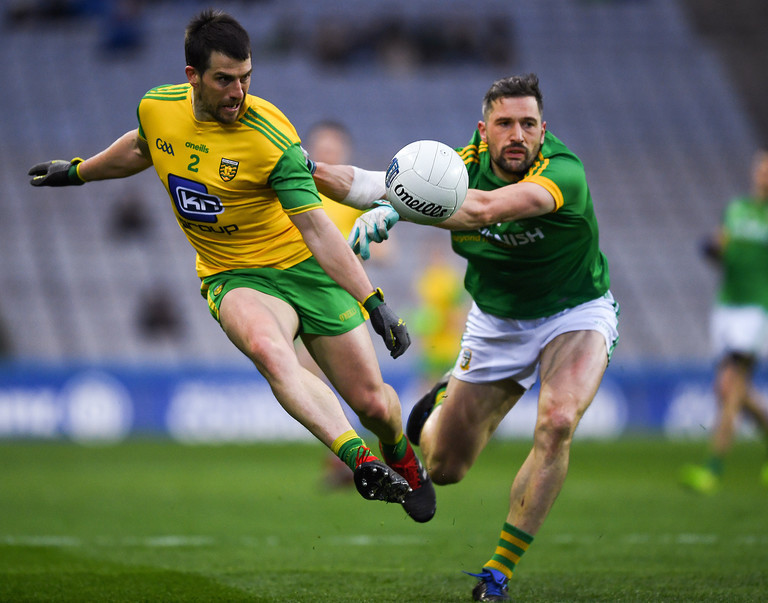 The Royals came flying out of the blocks and found themselves eight points clear by the thirteenth minute with full-forward sensation Mickey Newman's physicality causing untold problems for the Donegal defence throughout the first-half. The Kilmainham club man played a major role in Thomas O'Reilly's goal after 10 minutes, clearing all and sundry with a fine aerial fetch before O'Reilly made no mistake when left one on one with Donegal keeper Sean Patton.

The reigning Ulster champions eventually found their feet, scoring four points in a row to haul themselves back into the game.

The introduction of Neil McGee from the bench curtailed the rampant Newman, but his disallowed goal on five minutes before half-time arguably was the game's crucial moment - the officials eventually coming to the correct decision after the big man palmed home whilst awaiting a ball in the small rectangle.

Nevertheless, Meath tagged on two more points before half-time stretching their advantage to five going in at the break.

Donegal grabbed a real foothold in the game in the second period, as Murphy started to impress himself on the Meath defence scoring from two attacking marks, before laying on the ball for Jamie Brennan to finish high to the net, thirteen minutes from time.

That was the first time they had hit the front, and it was a lead they wouldn't relinquish, eventually running out victors on a scoreline of 1-17 to 1-15.

In the earlier Division Four decider, Leitrim's dreams of a first piece of major silverware at senior level in a quarter of a century were shattered by a clinical Derry side.

The Oak Leafers ran out comfortable four points winners in the end, but not before the O'Rourke County played their part in a game laced with some fantastic scores.

Indeed it was Ryan O'Rourke who led the charge for the minnows, and his three points had helped Terry Hyland's side into a 0-07 to 0-04 lead after 23 minutes.

But Derry found their stride in the final ten minutes of the first half, scoring six unanswered points to take a three-point lead into the break.

Whilst both side traded blows in the early minutes of the first-half Derry would forge clear later on, with Slaughtneil duo Shane McGuigan and captain Chrissy McKaigue very much to the fore. Damian McErlain's side picking up the first piece of silver to be handed out on finals weekend after a 0-20 to 0-16 victory.

In Saturday's outstanding Division Three round-robin game, Westmeath were celebrating after a nail-biting draw with Louth ensured their passage to the divisional decider and their participation in tier-two football next year.

The Wee County led by two at half-time after Bevan Duffy's goal, but a Ger Egan penalty in the second half put the Lake men in the ascendency.

Louth, who themselves needed a win to secure their own promotion alongside Laois, had their hopes all but ended when Tommy Durnin was sent off in the dying embers as they chased a winner. John Heslin put Meath ahead and whilst Ryan Burns drew Wayne Kierans side level, it will be Jack Cooney's charges who will advance to next Saturday's decider.

GAA
4 months ago
By Gary Connaughton
Rory Gallagher Gives Insight Into Why He Fell Out With Jim McGuinness
GAA
1 year ago
By Donny Mahoney
'Will We Go Back To The Way It Was When I Was Playing? Will It Go Back To That Rawness?'
GAA
1 year ago
By Darragh Small
'We Were Broken Hearted. It Hurts When You Are Losing Matches Like That.'
Previous Next