Donoughmore manager Donal Dineen knows Rena Buckley’s legendary status will only grow after she picked an All-Ireland Junior Club medal in victory over MacHale Rovers at Duggan Park in Ballinasloe.

It was an epic encounter between the Cork and Mayo clubs, and as the floodlights were switched on as the game went to extra-time, the former Rebel dual star emerged once again as the main figure.

Niamh Lohan and Rachel Kearns scored the goals for their respective sides but it was 0-7 from the boot of the 32-year-old Buckley that swung the game.

It was a 21st national medal for Buckley while her teammates basked in the glory of a first All-Ireland crown for Donoughmore since they were senior champions in 2003.

“Everyone knows Rena is a legend,” said Dineen.

“She is a fantastic role model for the younger girls. You would see her in the car park coaching them after training. That is the type of player and person she is.” 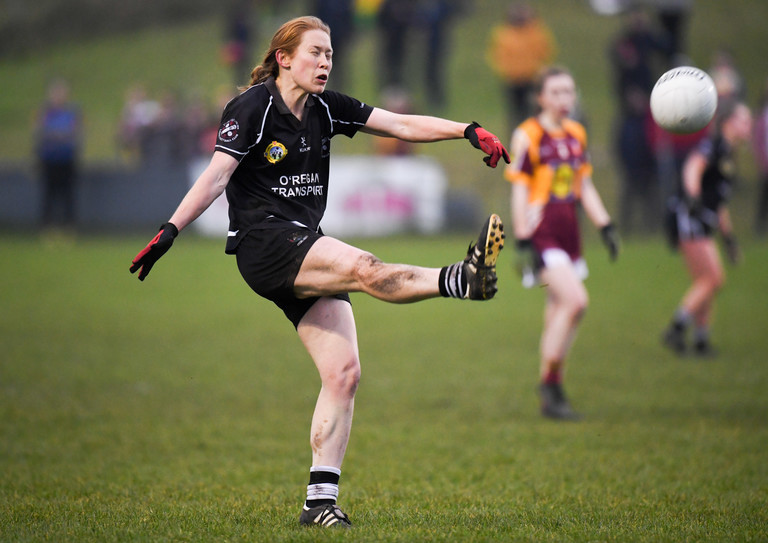 Rena Buckley of Donoughmore scores a point from a free during the All-Ireland Ladies Junior Club Championship Final match between Donoughmore and MacHale Rovers at Duggan Park in Ballinasloe, Co Galway. Photo by Harry Murphy/Sportsfile

Many of the Donoughmore players weren’t even born when the club won their last All-Ireland but there was still plenty of experience and they showed it early.

They raced into a 1-4 to 0-0 lead with Buckley opening the scoring in the second minutes and then Lohan’s goal seven minutes later. She received the ball from Buckley and then a fortuitous effort looped over Niamh Larkin in the MacHale Rovers goal.

Mayo forward Kearns, who had picked up an All-Star last week, played a massive role in getting her side back into the game.

She scored 0-4 in the first half and with four of the closing five points, MacHale Rovers only trailed 1-7 to 0-6 at half-time.

Buckley scored on the resumption and that was quickly cancelled out by Rebecca Maughan before there was a long period without a score.

Then there was a frenetic ending to normal time. Kearns had been yellow carded but she returned and rifled a free into the roof of the Donoughmore net in the 55th minute.

MacHale Rovers were desperate for an equaliser and Kearns provided that too as the game went to extra-time.

But Donoughmore’s experience prevailed after they took a 1-11 to 1-10 lead into the break. Buckley’s seventh point gave them a two-point lead and while Rebecca Maughan cut the gap to the minimum, the Cork side held out for victory.

It was third straight win in this competition for Cork clubs, after Aghada and Glanmire, and Dineen was thrilled to see his daughter Deirdre Dineen involved at wing-back for Donoughmore.

“She always dreamt of winning an All-Ireland. She followed the great Donoughmore teams down through the years,” said Dineen.

“This was her dream and now it has been fulfilled for her.”

But the wait goes on for a Mayo club to win the junior championship. Knockmore failed in 2008 and this was another agonising defeat.

“We gave it our all and left everything on the pitch but it sucks coming second, we hate it,” said joint manager Jarlath Tolan.

“We had such a fantastic year, built ourselves up from the ground right to where we are, the second-best team in the country, that is a pretty good achievement.

“But we knew we were up against it. There is an awful lot of experience in that Donoughmore team and they were excellent.”