'I Don’t Want To Come Home Having Not Played AFL Football'- Journey To The 0.01%

"I don’t want to come home having not played AFL football."

‘Get online on August 9’ was the campaign slogan for the Australian census in 2016, as it marked the first time internet submissions of census forms were permitted.

There was 74,895 Irish born participants in that survey, with another 23,025 from Northern Ireland.

A combined 97,920 from the island of Ireland. 0.02% of those were there to play professional Australian Rules Football.

What that effectively means is that, per the most recent census, 0.01% of the Irish in Australia have played in an AFL match. Westmeath’s Ray Connellan is determined to become a part of that 0.01%.

I wouldn’t consider it a success if I didn’t play an AFL game.

Ciaran Byrne, for example, from Louth. He played in round one against Richmond in the MCG in front of 94’000 people! If that doesn’t light a fire under your arse, I don’t think anything will. My friends are going at it. These are my peers and looking at the boys in the club getting games just gets you itching to get out there and make a name for yourself. It is definitely something that gets me going, I never went into my shell, just always try get the best out of myself.

I mean it is professional sport. You can’t say it is likely, but it is realistic. It is a realistic goal. Look, you never know how things go but speaking to my coaches and my head coach it is something that they expect of me.

Connellan was a student at NUI Galway and a promising inter-county footballer with Westmeath when he developed a fascination with the Australian Football League. An inclusion in the International rules series squad only further honed that and when a recovery session conversation prompted Colm Begley to speak fondly his own experience in Australia, Connellan wanted in.

He discussed it with his family, all the while under the impression the AFL recruiters would have to approach him for any opportunity. While that may have been the traditional route, it was not the only one.

My brother, David, he knows a guy from college who is friends with Tadhg Kennelly. His mate got in touch and said 'can I give your number to this guy. His brother is interested.' Tadhg rang and said 'look Ray, we were actually having a conversation about having you up' and said come to Dublin to do a bit of testing. I went to Dublin, tested pretty well and from that joined up with an academy.

From the outset St. Kilda showed the most interest and ultimately Connellan returned to Ireland with a contract offer in his back pocket. Excitement was at an all-time high. He had just turned 22, three years of university down, a 2-year contract in Australia signed and a Leinster final against Dublin in Croker to look forward to. Then disaster struck.

I had just come home from three weeks with St. Kilda and had agreed terms on my contract that week. I just signed a contract and faxed it back to them. Then we played Dublin, early on I went up for a ball and it happened. I’d to go and send St. Kilda a little email that I fuckin' broke my leg… 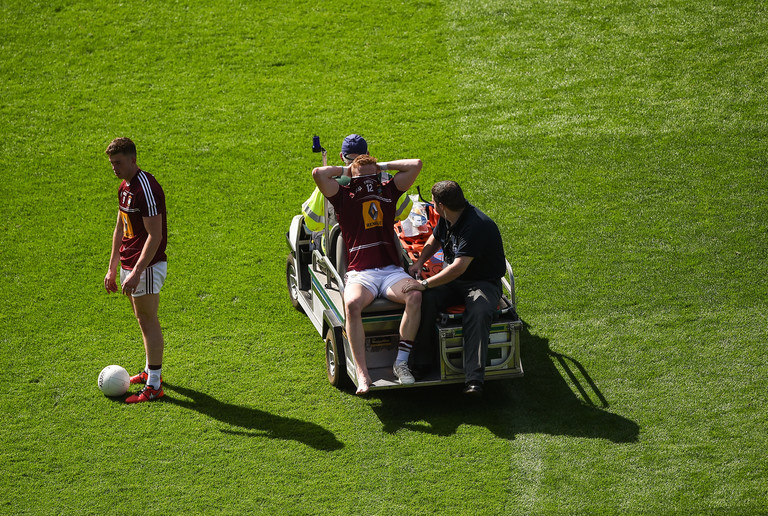 The Westmeath man had played in the game with St. Kilda's blessing and they approached the set-back with understanding and assurance. It was arranged that Keith Fox, the Irish rugby physio, would oversee his recovery and eventually Melbourne's Irish contingent got another recruit.

A common explanation for the failed breakthrough of Irish recruits in homesickness. The lack of a support network leads to isolation and goes partly towards explaining why only 21 of the 63 Irishmen who made the transition went on to play in the AFL. Connellan's situation suggests he is more likely to avoid this fate. Kilkenny's Darragh Joyce was also drafted to St. Kilda at the same time as him. The six Melbourne based Irishmen as well as Geelong's Zach Touhy and Mark O'Connor are in a WhatsApp together and routinely meet up for FIFA or a few drinks. All the sundry areas are boxed off, the one percenters taken care of.

It was recently announced that Marty Clarke was set to assume a new role for the AFL in Ireland as they look to step up their Irish recruitment. Clarke is following in the footsteps of former international talent scout and Kerry footballer Tadhg Kennelly, who is often accused of 'poaching' Irish talent. Unprompted and affirmative, Connellan challenges that view.

What annoys me is the whole narrative around Tadhg Kennelly being this mercenary for the AFL who comes and takes away your children in the night, and takes them to Australia without you knowing.  Honestly, that is such bullshit. It really gets under my skin, it gets under the skin of every single one of us out here. Tadhg has never made anyone go to Australia. Tadhg offers a chance for you to see if you are good enough to make it.

Some people can come across and get on no problem and others don’t, but Tadhg has never stolen anyone or made them come across, it is down to a personal decision by a player whether they want to go or not.

That is not to say he does not sympathise with the sentiment. After all, Connellan is still an Irishman at heart.

'Look, I see the side of the argument at home. People are so passionate about it. It’s the one thing I love about GAA, the idea of players leaving boils their blood. I love that passion and pride for football. I mean I’ve seen games of David Clifford playing back home, this guy could turn out to be one of the greatest footballers of all time if he keeps going like he is. He is incredible. To lose that from Gaelic football would be a real shame because you never know how good he could have been.'

On the other side of the coin, a guy like him could come across and set his whole family up, look after his kids whenever he has any, head home, buy a house. It is the opportunity to give someone an incredible life that is on offer. It is up to the individual to make the decision at the end of the day, if they want to stay at home and see how good they can be at Gaelic football or give it a chance here.

They could equally be as happy in Ireland as you are here. That is life.

Facebook has become a fundamental tool in assisting Irish abroad. It facilities cross-continental conversation, like this interview, and sporadically delivers a wave of nostalgia via bygone photos. Westmeath have failed to return to the heights of 2016 and the prospect of a reunion is an attractive one.

I miss it. I’d love to come back and play again. I don’t know, sometimes on Facebook, you know that thing it shows you ‘on this day’? Man, there is times on that when a photo of a team or a GAA photo will pop up and I'd say 'Jesus, I'd love to be back doing that now.' I'd love to have a week at home play a game and come back over then.

It would definitely be something I'd like to do when I finish here. I could be finished over here at the end of the year, it is as cutthroat as that. This could all be over at the end of this season for me. You don’t know how it will work. If that was the case I guess I'd be at home playing Gaelic football again. Best case scenario, I stay here for six or eight years playing good football maybe I’ll go home and play for Athlone then.

This is the cusp of a make or break year. A breakthrough in professional sport or the gradual winding down of his contract await. Either way, he is prepared.

I still have a year of college left. The way I saw it, I came out here and signed a two-year contract. I'm in my last year now and the way I was looking at it was like 'I give this a go. I give it everything I've got. if it works, that’s brilliant. If not at the end of two years I go home. I’ll have made enough money for me to get home, pay for myself to get through the last year and a half of college.' If it was to all end tomorrow I’d be able to go home and finish off my degree and just go from there.

Ray Connellan is representative of an unconfined Irish diaspora. The Athlone native has certainly not lost any of his unmistakable Irishness. The conversation maintains a familiarity, 'sure, look-its' and 'ara's' aplenty. 'There's a lot to be said for reliable weather' is a phrase uttered more than once. The recent Sigerson Cup final which featured several former team-mates was watched via an online stream on his iPhone. Homesickness is not a threat although he is grateful for that typical 'Irish abroad' trait:

I went out to a sevens Gaelic football tournament here recently. I've go out there the last few years for a look. I was meeting people I knew from college in Dublin or Galway and then you are bumping into people who knew my brother and all of a sudden you’ve got ten different connections you didn’t know existed, the Irish just get together. It really helps. You might never see them again, but when you are out walking down the street and bump into them it’s nice to have a conversation in your own language.

It's great that the irish can just bounce off one another.