Carla Rowe hit two stunning goals as Dublin defeated Cork in the TG4 All-Ireland senior final at the fourth attempt and put titles back-to-back for the first time in front of a record attendance at Croke Park.

Captain Sinéad Aherne hit 1-7 including a first-half penalty, while Áine O’Sullivan’s brilliant goal before the interval and eight Orla Finn points was not enough for Cork in front of 50,141 spectators.

On two occasions in the second-half Cork closed to within two points of Dublin, but Rowe’s second goal 11 minutes from time ensured a relaxed run to the finish for Dublin, despite a late yellow card for Leah Caffrey.

Straight from the off the physicality and skill level on show was eye catching, while the impressive tackle technique of Lauren Magee denied Libby Coppinger when she crept in behind the cover in the first minute.

It wasn’t until the seventh minute that Dublin captain Aherne broke the deadlock with a free following a foul on Niamh McEvoy, and straight from the kick-out Aherne punished a mix-up between Martina O’Brien and Shauna Kelly to score Dublin’s second.

But Cork soon settled, and with Marie O’Callaghan, Kelly and Emma Spillane launching their attacks from a strong half-back line they soon gained parity. Finn had missed her first free, but following some strong, direct running from Ciara O’Sullivan she slotted the next two, while her third free in the 13th minute gave her side the lead.

Nicole Owens was causing plenty of trouble for the Cork full-back line and she often roamed deep from her top-of-the-left position, and after she popped up to score Dublin’s third, it was the St Sylvester’s forward that launched the attack that saw Lyndsey Davey hauled down for a penalty, which Aherne converted for a 1-3 to 0-3 lead. 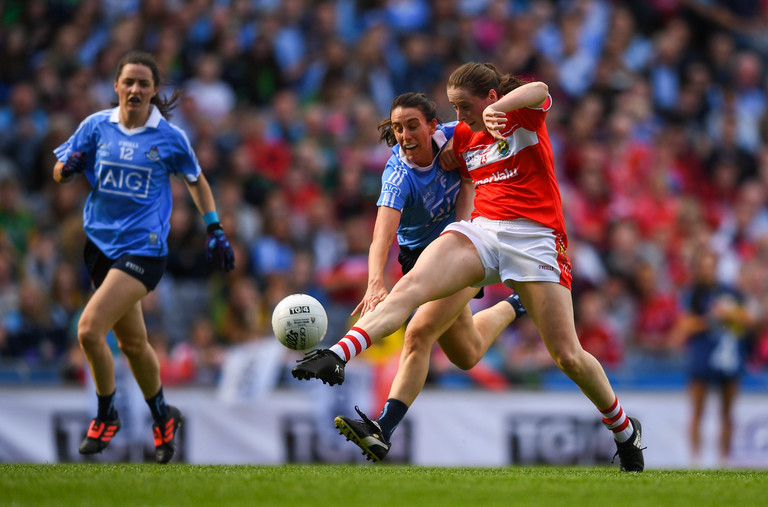 But Cork were soon level thanks to a brilliant Áine O’Sullivan goal. The danger appeared to be cleared when Sinéad Goldrick gathered possession, but the Cork attacker intercepted her pass and curled a stunning shot to the top corner.

For the first time in the championship Dublin found themselves in a tight tussle, but they responded in style before the break. With two minutes remaining a brilliant string of passes from Davey, Noelle Healy and Olwen Carey put Rowe in on goal, but it was her sidestep that gave her the chance and she finished with class for a 2-6 to 1-5 interval lead.

Four points down at the interval, Cork needed a powerful second-half and manager Ephie Fitzgerald turned to youngster Saoirse Noonan for inspiration. Points from Áine O’Sullivan and Finn closed the gap to two points, but Dublin then needed the intervention of Niamh Collins with a goal-line clearance to deny Eimear Scally a lead goal in the 39th minute.

Two Aherne frees had Dublin back into a four-point lead by the 44th minute, although she missed a simple one in between, while Finn hit back with two of her own. 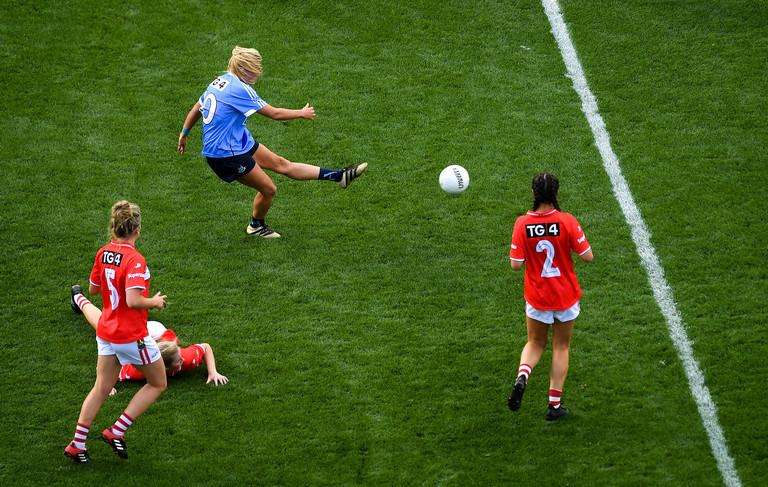 But 11 minutes from time Dublin struck the killer blow. The strong running of Martha Byrne set them on the front foot, but it was Davey who picked out Rowe, and she cut back on her left and sent a cushioned shot past O’Brien to wrap up a deserved win.