In the space of six years, they played each other five times at the quarter-final stage of the All-Ireland football Championship. A dead even split of two wins each, with one draw for good measure. It was a rivalry that produced one of the most ill-tempered games in recent memory and has resulted in numerous suspensions, resignations and retirements. This weekend they face each other once again as Dublin and Tyrone are set to do battle with a historic first Championship meeting in Omagh. The match will be aired exclusively live on Sky Sports, with throw-in at 7pm and is preceded by exclusive coverage of Roscommon v Donegal, with coverage commencing at 4pm.

From 2005 to 2011, there was a tit-for-tat struggle and it ultimately culminated in a drastic power-shift. On three occasions, the victor went on to lift Sam Maguire. A make or break fixture that tested both skill and steel.

In 2008 it was at its peak, as a promising Dublin cruised to the final eight under Paul Caffrey. They were the nation’s rising team and were set to face a battle-hardened Tyrone in Croke Park. Kevin Nolan had been called up to the Dublin panel for the first team that year and was eager to make his mark.

His first task, making the team.

I was 19 at the time and I wasn't expecting to play at all with Dublin. My Dad was telling me 'you are just there to put pressure on the lads and bide your time for next year.' But I was doing well in training. I was marking Jason Sherlock in A vs B games. Then it was around that time Aussie Rules scouts came over. I’ll never forget being asked to go down to a trial in Tralee.

This was obviously when Caffrey was the manager. He said to me 'we would love you to be at our training tomorrow but I know you are going to those trials and won’t be there.' I’ll never forget ringing him the night before the trial, 'Listen Pillar, I'm not going to the trial. I'm going to the training match.' I think it helped how he looked at me, I started the Leinster final then.

The prospect of a professional contract is an enticing one for many young athletes, but Nolan does not regret opting for Dublin training over an AFL trial. He had flirted with pro sport before and quickly discovered it wasn't for him: "A couple of years previous I had trials with Blackburn and Leicester City for soccer. Yes, I enjoyed it but I thought Gaelic football in Ireland, family and friends at home, was better. I would have loved to carry on but at the time I was a bit immature and a Mammy's boy. She was doing everything for me!"

Unfortunately for Nolan, his debut did not go according to plan as he struggled to come to grips with Wexford's Redmond Barry. After 20 minutes he looked to the sideline and saw substitute Paul Casey starring back at him. An official waved him off the field and his afternoon was cut short. The first note was sour and it set the template for the rest of that season. 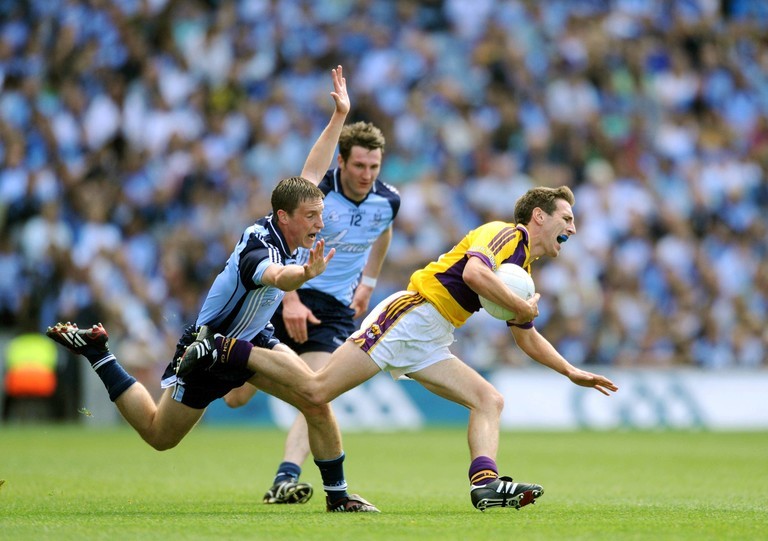 "They absolutely walloped us."

Despite his own underperformance, Dublin powered to the quarter-final to face Mickey Harte's Tyrone. It was billed as two teams on very different trajectories, one rising to the top while the other cascaded to the floor. Tyrone scrapped a one-point win over Mayo in the fourth round of the qualifiers to claw by their fingernails into the game, but an early Sean Cavanagh goal blasted them into a six-point lead and the Ulstermen never let up from there. When the dust settled, Dublin had been on the end of a 12-point hammering.

Nolan's Leinster final mishap saw him dropped and he watched from the stand as Tyrone tore Dublin limb from limb in their own backyard. It remains a day easily remembered but difficult to revisit.

Aw yeah, we had been confident. They had come through the back door and then we were just absolutely hammered in the lashing rain. They walloped us off the field and that was it, Caffrey's last game. That is the stand-out memory, playing against that Tyrone team, being on that squad while we were getting hammered.

(For Caffrey) It was just the manner of it… Maybe he found himself and the coaches had taken them as far as they could. He’d been there for a while before that and had major success in Leinster Championships and narrow defeats in semi-finals. 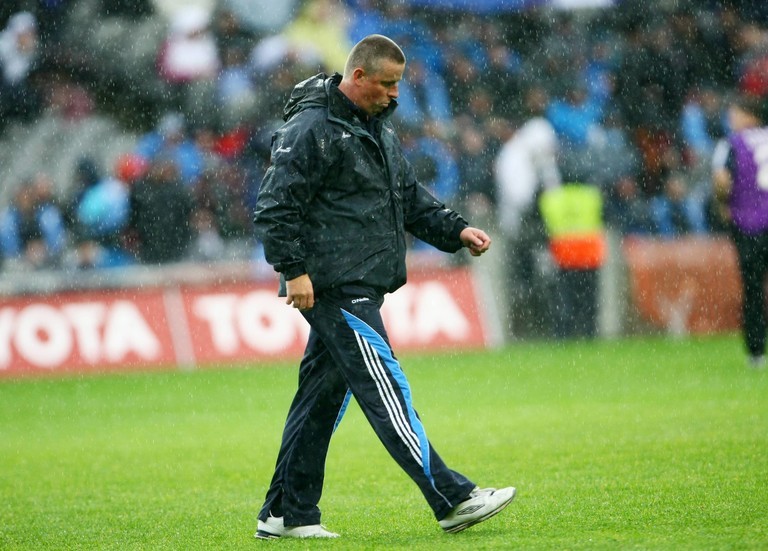 "We wanted to put an end to that team."

By 2010, Tyrone's reputation as kingpins was well established. Two All-Ireland titles in five years meant their pedigree was obvious and Dublin were raw, a whole new team and management. Now the talk was the hoodoo Tyrone had over the boys in blue.

Rather than let that muster as the uncomfortable elephant in the room, the Dublin panel openly discussed the issues they face conquering Northern teams.

The 2010 team was young. That meant it was a lot of young lads on the field who hadn't played Tyrone before. We didn’t have the experience of losing to them. I remember talking to Bryan Cullen before and he was telling me he had never beaten a Northern opposition team in Croke Park Championship before then. Suddenly we played and beat Armagh and then leading into the Tyrone game in 2010 we just said 'this is an aging team we are playing against.' The likes of Brian Dooher who I was marking that day. They were coming to the end of their career.

We wanted to go out and put an end to that team, this Tyrone team. That was what we aimed to do. So we did do it and we did it again in 2011.

Upon taking the reigns in 2009, Gilroy set structures in place that would see Dublin conquer their northern hex and eventually reap an All-Ireland title in 2011, a game in which Kevin Nolan would win man-of-the-match. Tyrone had carried an aura of tenacity and Gilroy planned to instill similar in the Dubs.

"Gilroy, he removed the characteristics of the squad that he felt were not good enough for the team. He gave some lads an extra chance then. I remember in 2010 we lost to Meath in the Championship. The likes of myself, Michael Fitzsimmons, lads like us got a chance in the qualifier route based on his changes. It built up a squad."

They were both really professional in my eyes, I think Pat was big on the culture. What you do away from the set-up. Gilroy would have focused on that as well. Eliminate this Dublin ego and cliques in the squad. He was focused on peeling back the layers.

On the field, Dublin adapted and evolved from their noughties defeats in order to ensure it wouldn't happen again. Nolan's debut may have been strenuous but it thought him a valuable lesson and for the next few years he perfected his tackling technique, so much so that Kevin McManamon would later hail him as one of the best tacklers out there. When handed the tasked of curtailing dual All-Ireland winner, Brian Dooher, individually and collectively Kevin Nolan and his team were ready.

Bryan Cullen was initially a half-back when I came in. That’s how I saw him. But he was on the left half forward line when we played Tyrone in 2010 so if Dooher went too far back, he knew that I’d give him a call. He would pick him up. Then when he advanced, it was a changeover. We did that very well that day. Barry Cahill was on the other side, it was just a laid out way so we knew that the tactics were right. We had a young, rejunvetated team the same way that Tyrone were four or five years previous to that. We felt if we got a chance against these we had to take it. 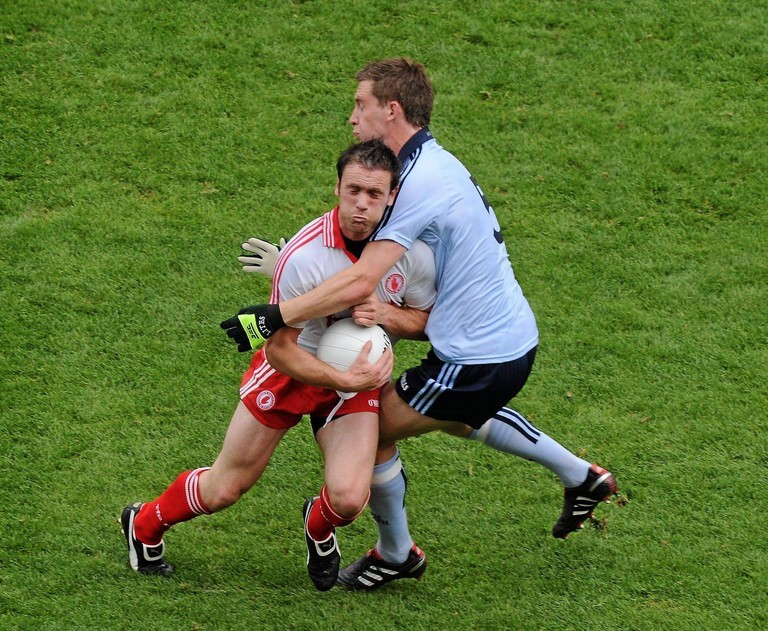 A psychologically scarred Tyrone in search of revenge await Dublin this week. Last year Jim Gavin's side doled out a 12-point defeat in front of 82,300 people. In the aftermath, Tyrone lost their captain as Sean Cavanagh retired.

It is four years since Dublin last lost in the Championship. Bragging rights have assuredly moved to the capital but like that Dublin 2010 team, this is a new Tyrone. Now is their time and they need a performance. This is their acid test.

Kevin Nolan knows this Dublin football. He is an All-Ireland winner, an All-Star and has played under Paul Caffrey, Pat Gilroy and Jim Gavin. Thus, he knows precisely what it will take for Tyrone to beat them.

For Tyrone to have any chance they had to make sure they are still in the game after 40 minutes. The big thing for teams is making sure Dublin don’t get a good start, that is what they aim to do.

From a Dublin perspective, I’d be, not weary, but conscious of the fact you are playing a Championship match up in Omagh. They would have been there before under Jim in the National League. They'd have the set-up perfect. Where they are staying the night before, what they are doing in the run-up. Jim, he wouldn’t leave any stone unturned. Preparation-wise they will be flying.

The main thing is this; do not get into a dogfight with Tyrone up there.

Sky Sports have another live and exclusive doubleheader on this Saturday July 21st. Coverage of the Senior Football Championship Quarter-Final between Roscommon and Donegal starts at 4.00pm. It will be followed by coverage of Tyrone v Dublin at 6.45pm.

For the latest online news go to www.skysports.com/gaa