Kerry and Dublin played out a compelling draw at Semple Stadium in Thurles on Sunday afternoon.

A David Clifford penalty in the 74th minute levelled the match at 1-18 to Dublin's 4-9.

David Clifford slots home a penalty for @Kerry_Official to level the game in the dying seconds in Round 2 of the Allianz Football League against @DubGAAOfficial #GAANOW pic.twitter.com/rlK6lByqPn

Kerry had been six points down at the break and seven points behind early in the second half. Two goals from Con O'Callaghan and another from Cormac Costello provided the Dubs with much of their advantage.

Kerry's comeback began in 45th minute as they reeled off five unanswered points. They were level in the 56th minute through Paul Murphy.

However, a penalty from Cormac Costello in the 60th minute - after Diarmuid O'Connor was adjudged to have fouled O'Callaghan - looked as though it would give the reigning All-Ireland champions victory.

The Kingdom fought back once more and, when Philly McMahon fouled Stephen O'Brien - he was also shown a black card - Clifford stepped up to draw his side level. 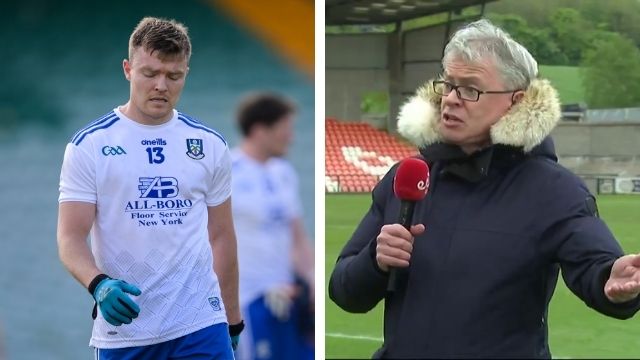 GAA
7 months ago
By PJ Browne
Scenes In Clones As McCarron Kicks Monster Score For Monaghan Win
GAA
7 months ago
By PJ Browne
'I'll Be Delighted To Hand The Bainisteoir Bib Back To Him'
GAA
8 months ago
By Eoin Harrington
Watch: Guessing The Handicaps For Round 2 Of The Allianz Football League
Popular on Balls
The Rewind
1 day ago
By Gary Connaughton
Quiz: From Which Irish County Did This Company/Product Originate?
GAA
7 hours ago
By PJ Browne
Insane Drama As Late TJ Reid Goal Sends Ballyhale Into All-Ireland Final
The Rewind
2 days ago
By Jonathan Byrne
The Story Of Meat Loaf's Tour In Ireland During The Troubles Is Remarkable
Football
5 hours ago
By Jonathan Byrne
Roy Keane Enjoyed Dig At Harry Kane For Referee Bias Being 'England Captain'