Oonagh Whyte’s brace of goals gave Dublin an eighth TG4 Leinster Ladies senior crown in a row and after winning the third of his tenure, Dublin manager Mick Bohan admitted he was delighted to see his side retain their provincial crown.

Dublin were pushed all the way by Westmeath, who only fell away in the final quarter when goals from the outstanding Nicole Owens and Niamh McEvoy gave them a strong winning margin.

“We have lots of work to do but we are happy with where we are at,” said Bohan, who has led Dublin to consecutive All-Irelands as manager.

We are obviously delighted. There are parts we weren’t happy with and parts we were really happy with, so it is a difficult one to gauge after nine or ten weeks without competitive action.

We are delighted with some of the new kids who were really impressive. Oonagh Whyte had a fantastic outing. Caoimhe (O’Connor) and Sarah (Fagan) when they came into the fray contributed.

Whyte fired two key goals for Dublin in the first half, which saw them recover from the loss of Sinead Aherne early on through injury and 15 scoreless minutes at the start to lead by 2-4 to 0-6 at the interval.

Westmeath defended stoutly before that point and their manager Sean Finnegan said he couldn’t fault his side’s effort.

“We knew it was going to be a massive task for us. We said ‘let’s stay in this game’. We asked them for a big effort and we got it,” said Finnegan.

“I am as proud as punch of them and they never threw the towel in. That is a serious Dublin team. A serious machine. The easiest thing would have been to pack the tent and go home. But they didn’t.”

With Sarah Dillon, Annie Dolan and Leanne Slevin on target, Westmeath recovered from the loss of Kelly Boyce Jordan to an early yellow card, but when McEvoy finally got Dublin off the mark with a free at the end of the first quarter they started to improve.

Westmeath had a let-off when McEvoy hit the crossbar from a free but the Dubs were not going to be denied as McEvoy and the excellent Sinead Goldrick pointed to level the game on 26 minutes. 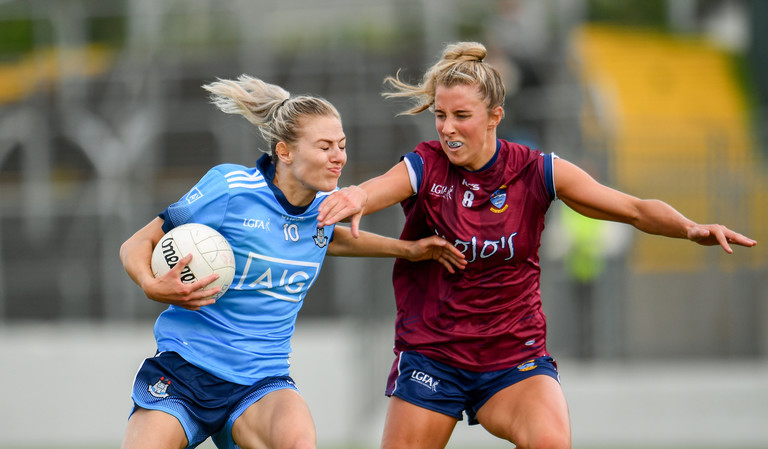 Owens’s good work set Whyte up for her vital first goal, and even though Westmeath hit back with two frees from Slevin, just before the interval Whyte found the net once more.

With Westmeath piling on the pressure Jennifer Dunne picked up a yellow card for Dublin but they responded well scoring the next two points through Whyte and Owens.

Westmeath got a huge boost when Slevin converted a penalty after Boyce Jordan was fouled after penetrating the defence. Finnegan’s side came at Dublin in the final quarter but with ten minutes to go they suffered a double setback when the influential Jo-Hanna Maher was yellow carded and from the free out Dublin worked possession up the field and Owens took a pass from Whyte before finding the net.

That broke the heart of Westmeath who had worked themselves to a standstill up to that point. McEvoy scored a fourth goal in the closing stages as Dublin ran out winners but not as emphatic as it looked.

See Also: Here's How The All-Ireland Series Is Shaping Up After Today's Action

GAA
1 week ago
By PJ Browne
'People Look At You Funny And Have Certain Opinions That They Mightn't Always Say'
GAA
1 week ago
By Daire Walsh
Cork Hold Off Dublin By A Point At Croke Park
GAA
3 weeks ago
By Michael Gallagher
Dublin Work Hard To Beat Mayo By Five Points
Popular on Balls
Football
7 hours ago
By Gary Connaughton
Watch: Enda Stevens Scores An Absolute Thunderbastard Against Brighton
1