Monaghan weren't far off bringing Gaelic football's longest ever League and Championship unbeaten run to an end in a compelling game in Clones.

Dublin, as is their wont, would eventually come from 6 points down to win by a goal, 2-15 to 1-15, showing the type resolve which has kept their loss column blank for 36 consecutive games. Rather torturously for Monaghan, but pertinently for the Dubs, Jack McCaffrey's winner hit the net at the exact second the clock ticked red - Dublin's first lead of the entire game arriving at 70:00.

It was a neatly worked Bernard Brogan goal which initially pulled Jim Gavin's men back into the contest, the air of inevitability unavoidable as the 32-year-old marched back to position having swept the ball past Rory Beggan in the Monaghan goal.

A monstrous score from Kieran Hughes on 54 minutes momentarily evoked the sense that Monaghan - whose performance to that point had been colossal - had enough in the tank to stem the Dubs' flow, but back came James McCarthy, Philly McMahon, Dean Rock and substitute McCaffrey with seemingly irrepressible scores. Brogan applied the cherry on top in stoppage time.

But while it wasn't to be Monaghan's day, one of their young stars experienced an initiation of sorts. Welcome to the big time, Jack McCarron.

It was stratospheric display from the 24-year-old DCU student, whose 1-9 (1-5 from play) had Dublin teetering on the brink. His goal was a composed finish from a tight angle, as he beat Stephen Cluxton at his near post with the inside of his left boot. His points were exquisite, his footwork and pace outstanding.

It's worth bearing in mind that this is a man who, in the past, has torn his rotator cuff, torn his ACL, torn his hamstring on a number of occasions, and surgery on his ankle. Today, McCarron tore Dublin asunder, and viewers reacted accordingly.

Despite the result Jack McCarron is an unbelievable talent

Jack McCarron great addition to Monaghan. Clinical finisher, 2 sharpshooters now in him & McManus. Tyrone could do with 1. #AllianzLeagues

Jack McCarron a deserved man of the match. Some talent

Son of 1986 All Star Ray McCarron, nephew of Hugo Clerkin and cousin of Dick Clerkin, the left-footed stylist comes from serious stock.

Crucially, it would appear that, should he leave his injury woes in the rear-view, McCarron can offer Monaghan the threat at inside forward that they've been crying out for. Conor McManus, for one, will be pleased.

Make no mistake about it: Dublin were no match for McCarron today. It's been an excruciating five years or so for the young man, but he arrived like a man possessed, prepared for an inauguration of sorts. He scored 1-5 from play and still looked absolutely devastated to pick up his man of the match award. He barely said a word, but said enough.

After countless months of recovery work and rehabilitation, and countless hours spent booting balls over the bar on his own after training, this time Jack McCarron might well be here to stay. He's the real deal, this guy. 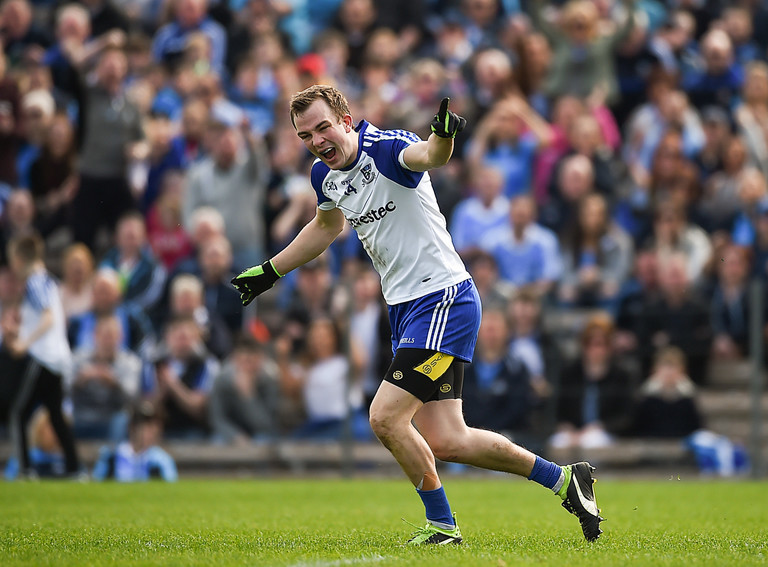 2 April 2017; Jack McCarron of Monaghan celebrates after scoring his side's first goal during the Allianz Football League Division 1 Round 7 match between Monaghan and Dublin at St. Tiernach's Park in Clones, Co Monaghan. Photo by Philip Fitzpatrick/Sportsfile

GAA
4 days ago
By PJ Browne
'We Discussed About Me Transferring To Sligo. I Still Have The Transfer Forms'
Previous Next

GAA
15 hours ago
By Jackie Cahill
'I Felt Sick, Insanely Tired' - Ex-Armagh Star Details Covid-19 Experience
GAA
2 days ago
By Balls Team
Monaghan Footballer Converts Field To GAA Pitch
GAA
4 days ago
By PJ Browne
'We Discussed About Me Transferring To Sligo. I Still Have The Transfer Forms'
Popular on Balls
Rugby
19 hours ago
By Donny Mahoney
Watch: CJ Stander Sidesteps A Sheep
6

Football
20 hours ago
By Gary Connaughton
Quiz: Name Every Nation Republic Of Ireland Has Played Against
11