On the 11th of September, Mayo will take on either Kerry or Tyrone in their sixth All-Ireland final since 2012. They have yet to win a crown in that time, but former Donegal footballer Eamon McGee thinks Mayo's ability to bounce back to finals year-on-year shows incredible resilience.

Eamon McGee on the brilliant resilience of Mayo

Eamon McGee played on the Donegal team that defeated Mayo by four points in the 2012 All-Ireland final, starting an unfortunate string of near misses for the green and red.

They have typically come up short against the might of Dublin, but finally managed to vanquish their old rivals in the All-Ireland semi-final earlier this month. McGee spoke to us yesterday and said that, though he wasn't convinced Mayo would go on to win the All-Ireland, their resilience to get back to a final was something worthy of great respect.

Do I see them beating Kerry should Kerry beat Tyrone? No, I don’t. But I think that’s not a slight against them, I think the fact that they are there so long and the fact that Horan’s brought through a relatively new team to be competing in a semi-final, I didn’t think Mayo would do anything without Cillian O’Connor this year.

For me, the leaders for that Mayo team were O’Connor, O’Shea and Paddy Durcan. And O’Shea taken off, O’Connor is out injured, and they still go on to beat Dublin – that is a serious, serious testament to James Horan and to the Mayo players and what they’re doing as a county to be able to bring lads who not just have the ability but have the mentality for that. That’s the big thing.

Do I see any big difference [since 2012]? No, but that’s not a slight on them either. I just see someone that fancies themselves, in that they have the belief in themselves to go on and win an All-Ireland. Whether that will be enough to get over the line I don’t think so.

But the fact that they’re in the picture, without Cillian O’Connor, is a serious testament to the mental side of things that they’ve been bringing these last few years.

McGee was speaking to Balls to promote the new season of RTÉ's Ultimate Hell Week, where he will go up against the likes of Darran O'Sullivan, Peter Stringer, and Stephanie Roche, as they take on a series of military training exercises.

Special Forces: Ultimate Hell Week is back.. and this time with a few familiar faces 🪖#HellWeek #RTENewSeason | Coming Soon pic.twitter.com/SSaruQ6J3H

The first season of Ultimate Hell Week featured Padraig O'Hora, who was the star of the show for Mayo in their semi-final win over Dublin - and Eamon McGee thinks that his experience on the show must have helped his intercounty career kick on.

I think that’s definitely something. When I heard that he’d actually finished the course I thought, ‘this man must be seriously tough.’ Great competitor. To see the way he dogged it out with Ciaran Kilkenny – Kilkenny looked fairly shook and he was giving balls away in that semi-final.

Kilkenny definitely looked like someone who was shook – I don’t think I’ve seen Kilkenny give ball away like that before in all the time watching him. He just looked so out of sorts. The only thing that I could put that down to was the fact that Padraig O’Hora was marking him and bringing that edge and that intensity to it all the time.

Kilkenny might look comfortable for the first 30 minutes, 40 minutes, but as the game goes on and you’re still bringing that intensity, you’re going to wear a player down, and I think that’s what we saw from O’Hora.

The ability to bounce back year-on-year is commendable from Mayo and, now that they've conquered the Dubs at last, hopes will be high out west that Sam Maguire might finally make it's long awaited return.

SEE ALSO: What Kerry And Tyrone Can Learn From Their Previous Contests 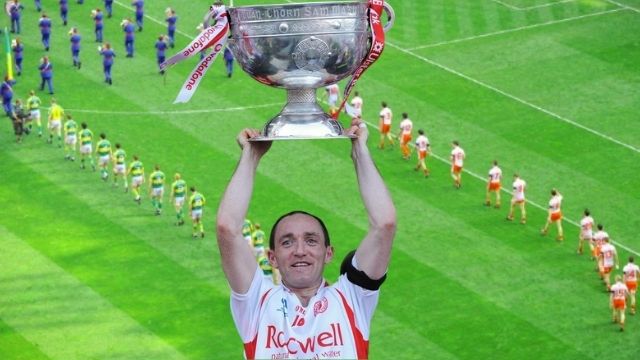 GAA
6 months ago
By Maurice Brosnan
'Bad Coaching. I Think That Is A Big Problem In The GAA'
GAA
9 months ago
By Eoin Harrington
"I'm Gonna Show These Rugby Boys!" - Eamon McGee On The Week From Hell With RTÉ
GAA
1 year ago
By Donny Mahoney
"Jim Threw The Book On The Table And Said 'Is There Anything You Want To Tell Me?'"
Previous Next

GAA
6 months ago
By Maurice Brosnan
'Bad Coaching. I Think That Is A Big Problem In The GAA'
GAA
9 months ago
By Eoin Harrington
"I'm Gonna Show These Rugby Boys!" - Eamon McGee On The Week From Hell With RTÉ
GAA
1 year ago
By Donny Mahoney
"Jim Threw The Book On The Table And Said 'Is There Anything You Want To Tell Me?'"
Popular on Balls
Football
22 hours ago
By Luke Delaney
Obafemi In As Stephen Kenny Names 27-Man Nations League Squad
GAA
2 days ago
By PJ Browne
How A Kerry Guard Ended Up Playing For The Tipperary Footballers
Football
20 hours ago
By PJ Browne
Five Things Learned From Stephen Kenny's Nations League Press Conference
Motorsport
1 day ago
By Eoin Harrington
F1: New Team Radio Clips Show Sergio Perez Frustration With Team Orders In Barcelona