Last Sunday, Laois successfully reached their season goal, they won the Joe McDonagh Cup in Croke Park. Today they went a step further and landed a remarkable victory over Dublin.

"I said from the outset making the (second-tier) final has to be our realistic target. There is nothing arrogant or stupid in saying that. That's the reality," he told the Balls.ie GAA podcast, the Three Man Weave, earlier in the year.

After overcoming Westmeath, they duly celebrated. A year-long commitment paid off and on Sunday night they enjoyed it. They spent the Monday visiting schools and watching the game back. By the end of the week, they'd march on to land the shock of the year, beating Dublin in a preliminary quarter-final 1-22 to 0-23. 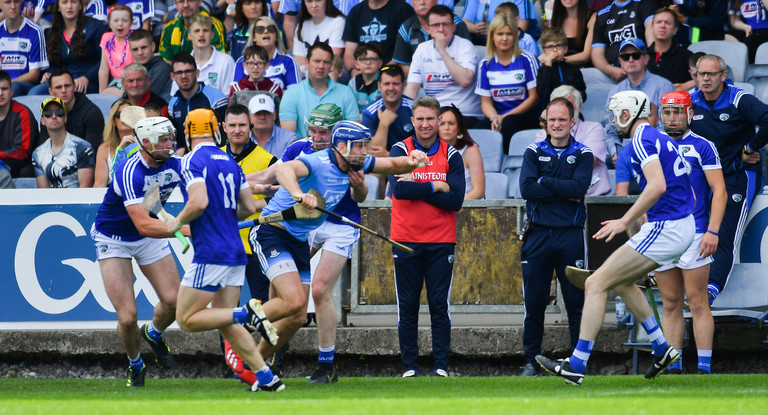 Backboned by Enda Rowland, the Laois keeper with a boomer of a puck-out, inspired by the electric attacker that is Aaron Dunphy and driven by a loyal servant in Cha Dwyer, the Joe McDonagh Cup champions march on to the quarter-final stage.

Overseeing it all is the Kilkenny legend. A beacon of sense embracing the stuff that matters and surrounding himself with worthwhile influences. He outlined as much in that interview.

I spent the last few years analysing matches and looking at them back. It's an aspect of it that I love. I love looking at videos, picking out bits and learning from stuff. Stuff I learned from other pundits as well, I certainly don't have all the answers to setting up a team but you have to be willing to learn.

Niall Corcoran, the former Dublin hurler, is our head coach. He's really good and our philosophies are definitely aligned.

And there's more. He calmly managed the Ross King controversy and ensured the former captain rejoined the panel earlier this year. He conducted interviews on Friday and allowed his players to strike a refreshing balance all year long.

A year after they avoided a relegation play-off on score difference, Brennan's outfit are now a Division One side, Joe McDonagh Cup champions and have taken a huge scalp off a Leinster outfit.

The result is a return to Croke Park where they will take on Tipperary in an All-Ireland quarter-final. Laois drive on.