Éire Óg ended one leg of Loughmore-Castleiney's great dual run with victory in the Munster football quarter-finals on Sunday.

The Ennis club defeated the Tipperary champions in extra after the game finished 0-9 each after 60 minutes.

Éire Óg landed two damaging blows in the first half of extra-time with goals from fullback Aaron Fitzgerald and Mark McInerney.

In the fifth minute of extra-time, Fitzgerald ventured beyond the halfway line, laid off the ball, continued his run, and was found just inside the large rectangle by a superb pass from Ciaran Russell. His low right-footed shot found the net. Loughmore had led by a point before the goal.

Their second goal came three minutes later after David Reidy caught a mark in midfield and Éire Óg sliced open the Loughmore defence to put McInerney through on goal. His sweet left-footed strike found the bottom corner of the Loughmore net.

Loughmore's journey is not over yet. They face Ballgunner in the Munster hurling semi-final this weekend.

"At the end of the game, we had more lads going down with cramp than they had. So, their S&C team were doing a fantastic job," Éire Óg manager Paul Madden told RTÉ Radio One's Sunday Sport after the game.

"We're very similar to them in a lot of ways. I know we didn't win our hurling [championship] this year, but we've been on the go non-stop, week in, week out. A lot of our dual players are they guys who are performing week in, week out.

"We knew what we were going to get today from Loughmore. We've seen them a couple of times this year, everyone has seen them on the TV.

"Our lads showed that we've got a bit of fight about us as well. The goals in extra-time gave us that bit of a cushion." 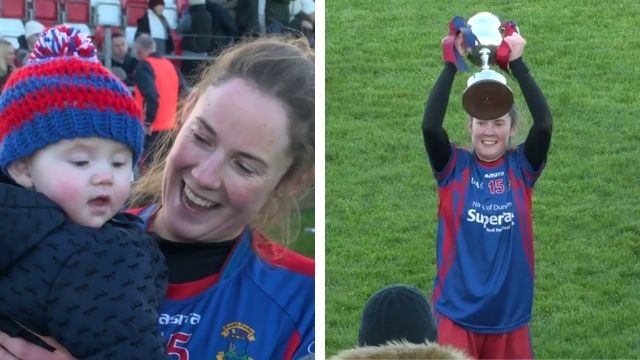