It has been a lively weekend of provincial action in the Electric Ireland Minor Football Championships, with Galway, Kildare and Monaghan making serious strides in their respective Connacht, Leinster and Ulster titles.

In a stellar weekend for Galway's minor hurlers as they booked their spot in the All-Ireland semi-final, the county's minor footballers were 2-13 to 2-9 winners in their Connacht final clash with Roscommon in Dr. Hyde Park - the fourth successive provincial success for the Galway minors.

The Ulster minor final was played in Armagh's Athletics Grounds. The Monaghan minors came up against last year's winners Derry, and pulled off a 1-9 to 0-9 win. Incredibly,  it's only Monaghan's fifth minor provincial title

Elsewhere, after a magnificent defeat of Dublin last weekend, the Wicklow minors ultimately came undone against Kildare; a county showing tremendous promise across every age-grade. It will be the Lilywhites who progress to the Electric Ireland Minor Leinster Final clash with Meath on Saturday at 2pm in Tullamore.

Huge second half performance from Kildare and they are through to a Leinster Minor Final after a 2-12 to 1-13 win over Wicklow! Different Kildare team in that second half pic.twitter.com/t9w7Uax2Ij

Here are your nominees for the Electric Ireland Player of the Week:

Man of the match as the Galway minors won their fourth successive Electric Ireland Minor Connacht Championship, Corofin's Matthew Cooley was instrumental in pushing the young Tribesmen beyond a stubborn Roscommon outfit.

Scoring 0-5 from play, Cooley's performance on Friday evening put the icing on a provincial championship run that has demonstrated his importance to this Galway team.

With an All-Ireland quarter-final clash against Clare coming next, Cooley will undoubtedly fancy his chances of displaying his prowess for scoring against a side that shipped a significant loss to the Kerry minors in this year's Electric Ireland Minor Munster final. 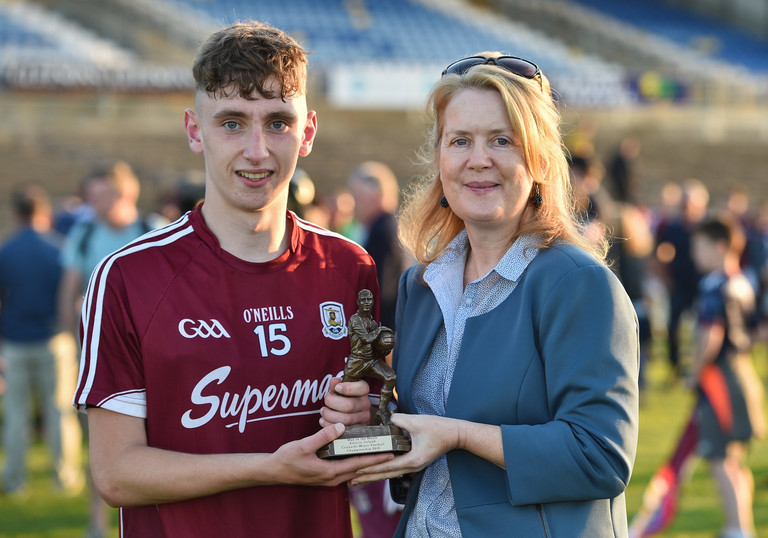 In a replay of the Electric Ireland Minor Leinster semi-final, the Wicklow minors suffered a disappointing end to what has been an unforgettable provincial run.

After both sides played out a highly-entertaining 3-13 to 3-13 draw last weekend in Newbridge, even the best efforts of Wicklow's Matthew Ging were not enough to prevent the Lilywhites claiming a 2-12 to 1-13 win in Aughrim.

In Ging, however, Wicklow have reasons to be cheerful. Scoring 0-4 in Wicklow's memorable 2-6 to 0-8 defeat of Dublin in Parnell Park three weeks ago, Ging looked to be the difference again between the sides on Friday evening.

Grabbing 0-5 of his side's 1-7 in the opening half, a bright start from the Wicklow minors left them leading Kildare by a solitary point going into the second-half. Although he would hit three further points in the next half-hour, a stronger Kildare bench would ultimately decide this replayed semi-final.

Matthew Ging what a Left Peg👌 End of Broadcast💪💙💛😂

Although this Electric Ireland Minor Ulster final will be remembered for a Donnach Swinburne penalty that shifted the momentum firmly in Monaghan's favour, Aaron Mulligan's 0-5 were instrumental in a game that relied on such small margins.

Accounting for such a high proportion of his side's 1-9, Mulligan's three converted frees (and two scores from play) kept Monaghan in touch with a Derry side that had claimed provincial success the year before.

In the build-up to Swinburne's decisive penalty on the 53rd minute, Mulligan - along with another of Monaghan's star men, Sean Jones - cancelled out Derry's lead with two well-took points.

Appropriately enough, it was man of the match Mulligan who would knock over his side's last point of the game to win Monaghan only their second Electric Ireland Minor Ulster crown since 1945.

A sweetly struck penalty in the 52nd minute by Donnach Swinburne proved decisive for @monaghangaa to win the @ElectricIreland Ulster Minor Football Final at the Athletic Grounds 🏆🏆🏆 Read full match report of their victory over Doire 👉https://t.co/kg3TbAVXmd pic.twitter.com/5ZCwfgWPCU