"Eugene Cloonan scored the equalising goal with our fullback's hurl that day. There's a very famous picture of it in 'A Season Of Sundays'. It's a standout match and I remember it very distinctly."

Paddy O'Dwyer looked like a man who had lost his pint in the pub. He'd turned to pick one up only to be told it belonged to someone else.

That someone else was Eugene Cloonan. Just moments earlier, Cloonan had scored a vital goal with O'Dwyer's hurley and then tossed it to the net beside the sliotar.

The goal would become a famous one. Athenry - in search of their third All-Ireland title in five years - had trailed by three points in the 60th minute of the 2001 All-Ireland club hurling final against Graigue-Ballycallan.

Brendan Keogh robbed the ball at midfield and slipped it to Gerry Keane. The Athenry number three hit a long ball over his shoulder towards the Graigue-Ballycallan goal.

Chaos ensued with Cloonan losing his hurley. Still, he followed the action, and in a moment of pure opportunism, spotted that O'Dwyer's hurley on the ground.

He picked it up, scooped the sliotar and tapped it to the net. A draw. 1-15 each and extra-time to follow. 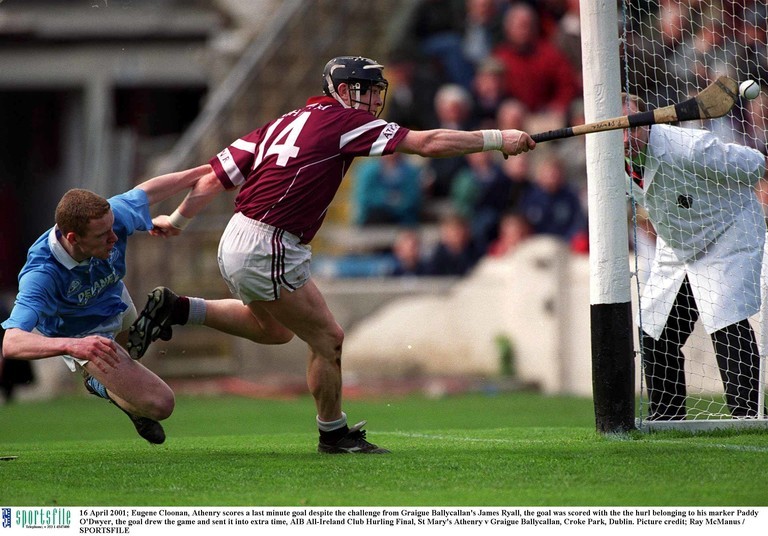 "The lads were talking about it last night, it was a case of 'Do you mind if I borrow your hurley?'" Athenry manager Pat Nally told the Irish Times on the day after the Easter Monday final.

I have certainly never heard of anything like it. We were just thanking our lucky stars. I think Eugene just found himself without his stick, saw what he assumed to be his hurl lying there, picked it up and scored.

Athenry had led for much of the game, by two at half-time and by five 10 minutes into the second half, but their Kilkenny opponents fought back and at one stage led by four late in the game.

In extra-time, Athenry took over with Cloonan moving out the pitch and captain Joe Rabbitte closer to goal. Cloonan hit 1-11 in all with 1-1 coming from play.

Athenry won the game at a canter in the end - 3-24 to 2-19 - and at the time became just the second club to claim consecutive All-Ireland hurling titles.

For Cloonan, it was his third title. He'd starred for Athenry when they won their first in 1997. Aged just 17, he hit 0-9 against a Wolfe Tones defence featuring Brian and Frank Lohan and three years later landed the same score as his side beat St Joseph's Doora-Barefield.

Later that year, Galway reached the All-Ireland final against Tipperary with Cloonan one of their star players. In the build-up, he was asked about his favourite goal. He picked out that scrappy one scored with Paddy O'Dwyer's hurley, "because it was for the club and lads I'd grown up with".

Forward to the 1:11 mark below to see the goal.