With news that Sky Sports will be using fake crowd noise for their upcoming coverage of the GAA All-Ireland Championships it got us thinking about how they could produce the most realistic matchday hubbub. The fake GAA crowd is new territory for broadcasters but fear not, we're here to help.

Here are a few GAA characters that will need to included in the crowd noise soundboard.

This is a fairly straight forward one to re-enact. All you have to do is play the phrase "Ah now for Jaysis sake, that's a black card!" immediately after every foul. It goes without saying that it doesn't matter if the foul actually warrants a black card, or even if it's at a hurling match.

There are two types of swearer that will need to be recorded: the apologetic "Jesus, Mary and Joseph" swearer and the person who just Fs and blinds from the first whistle to the last. To capture the essence of that person, just record a second version of everything mentioned in this article with added bad language.

The lad who thinks he's witty

From the get-go this fella will be very loud and try too hard to be funny. He'll also kind of look around after every smart comment to fully engage his audience, but this might prove difficult to get across on television, given it will be a purely aural insert. Phrases like "Give him a saddle!" are key.

This fella will stand there all game saying absolutely nothing until he comes out with a killer one-liner in the 70th minute. Usually it'll be at the expense of 'the lad who thinks he's witty' and, again, it will be hard to get across on television, because usually the witty auld lad likes to just lean over and quietly deliver the killer comment into the ear of the person next to him.

It's safe to say that after five minutes of reviewing crowd noises from a Mayo match, the people in charge of creating these fake noises would have looked at each other and exclaimed "We're going to need a bigger budget."

It's fairly straight forward to re-enact though — get a crowd of about a million people and have half of them constantly shout "Mayo Mayo Mayo" for two hours, while the other half are charged with having numerous loud heart attacks throughout the match.

Five minutes into the game: "That's it now! We're gone! We might as well go home."

The one with the air horn

It wouldn't be a GAA championship match without someone blaring the world's most annoying air horn. For true realism this noise should come out of the television at full volume and still play when you've put the TV on mute.

The fella who gets excited to see a lad he knows

This guys spends half the game on the phone ringing other people he thinks are at the match. If they want to showcase this on TV commentary then we should just hear: "Well. Where are you? .... Yea yea, I'm on the 45 ... No, the other 45 ... Oh I see ye now!" at random points during the game.

Presumably this was the first sound recorded for the fake GAA commentary. Just bang the play button on that one any time there are more than two consecutive handpasses around the middle third.

The scores from elsewhere person

This is a vital role and, in truth, should really replace any scores from elsewhere updates that come from the actual commentary team. This person is more of a national league phenomenon but, given that there will be Premier League and international rugby etc going on at the same time as some of these games, they'll be essential to the 2020 championship.

All the fake crowd noise production team need to do is throw in the odd "Bejaysis, Crystal Palace are 2-0 up against Man City" etc.

The goader will do nothing but abuse opposition figures for the entirety of the game, and sometimes even their own players. "Arra get up to hell and stop lying down ye bollocks [insert opposition player name here]!" is an essential line for this one.

This is the fan who spends the whole game just shouting "G'wan" at players. Feel free to reuse the recording in the same solo run as well. Especially in hurling – "G'wan TJ! G'wan TJ! G'wan!"

To showcase the unwise celebrator it's simple; all you need to do is play a clip of someone going absolutely bonkers celebrating a point, but play it after a wide. These are the people who jump the gun, thinking the shot has gone over, and lose the run of themselves for a good 30 seconds before realising their folly.

Our last candidate and it's not actually one person. It's just collection of barbaric yops, as Walt Whitman would put it. Audio technicians will need a lot of "Yehoo"s for late scores that further assert a team's dominance, and, of course, the "AG3£$31RCGH44^$"V3R" indecipherable roar that breaks out whenever there's a row on the pitch. 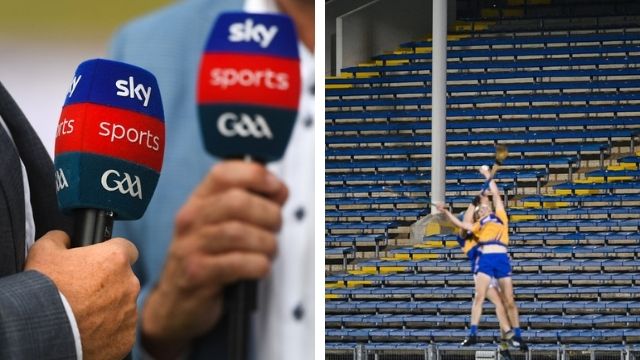