7 Of The Strangest GAA Punishments In History

The old CCCC didn't take long to get involved in the GAA championship in 2017. Despite the controversy though, the Diarmuid Connolly suspension is relatively straight forward by GAA punishment standards. We've been having a look at the strongest, strangest, and downright funny reasons for GAA bans and fines over the years

The summer of 2015 went off without a noteworthy occurrence for Dromard GAA in Longford. Well, that was until the GAA fined the club €2,000 for hosting a Jamie Carragher soccer school on their grounds.

It was a pretty petty response from the GAA, who claimed that under Rule 5.1 (a), that Dromard were subject to the punishment:

Property shall be used only for the purpose of or in connection with the playing of the Games controlled by the Association, and for such other purposes not in conflict with the Aims and Objects of the Association, that may be sanctioned from time to time by the Central Council.

Pretty black and white on paper, but when fans from other counties became aware of the fine, they pointed out some ironies. Mainly, that social gathering such as teen discos or functions were held all the time in GAA clubs.

Carragher apparently stepped in to help pay the fine, which in reality shouldn't have been handed down in the first place.

Long before the days of commercial deals with Avonmore and AIG, there was no such as a sponsor besmirching the good colours of a GAA team. The only brand that would appear on the jersey was that of the manufacturer, which was always O'Neills.

Mick O'Dwyer didn't like those rules. His Kerry side struck a deal with Adidas in 1981 for their green and gold to be made by Adidas through its Dublin base JA Hickey's. There was a bit of a sweetener - Adidas put £10,000 into the holiday fund for the squad.

Having worn the Adidas jersey in the Munster final against Cork, and again in the All-Ireland semi final (with the adidas logo taken off), Kerry came under huge pressure from the GAA the run up to the 1982 All-Ireland final against Offaly.. The Thursday before the final, messages were sent. It was heavily implied that they would have to forfeit the final, if they didn't switch back to O'Neill's. Micko responded by threatening to pull his team out of the final - but relented due to the significance of his team going for five in a row.

He didn't relent without pulling without a trick or two though. Before the match, a GAA official was sent into the Croker dressing-rooms to inspect the jerseys. Having anticipated this happening, O'Dwyer had instructed that the Adidas labels be cut from the inside of the jerseys to deflect the official's suspicions!

In the end, Kerry were hit with a £500 for their infringements during the year.

There were plenty of things which you could use to spot Ciaran McDonald from a mile away. Bleach blonde hair, points kicked from ridiculous angles (complete with finger wag), and socks pulled up as high as they'd go.

But on two separate occasions, Ciaran McDonald's socks got him in trouble.

His club Crossmolina won the All-Ireland Club championship in 2001, and two years later they were on the charge for another. Traditionally, the club wore maroon jerseys, white shorts and maroon socks. In 2003, the club won both the Mayo amd Connacht club titles with McDonald wearing white socks all the while.

This didn't present a problem for anybody - until the All-Ireland semi final against Dunshaughlin. McDonald once again wore white (which was expected) as the Meath side were put to the sword. 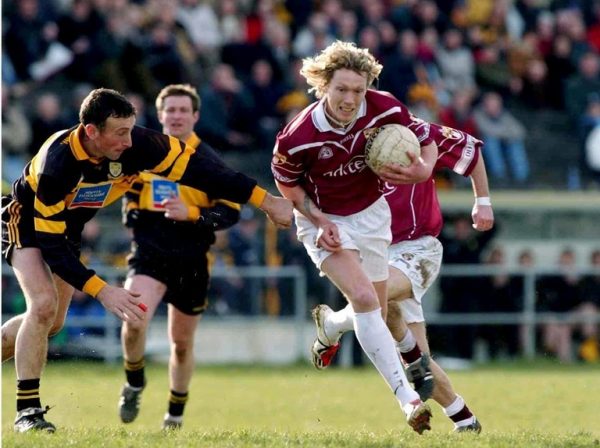 When he repeated the offence in the final defeat against Nemo Rangers of Cork, the GAA had had enough. 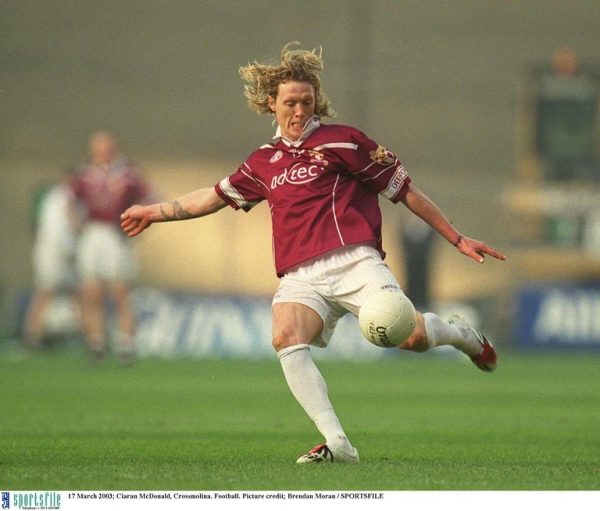 A letter was sent from headquarters to Crossmolina with an attached fine of €1,100 - €550 for each All-Ireland series match in which their player wore the wrong socks.

This one was just brilliantly juvenile. Sean Quigley is a modern day cult hero for GAA fans.

His Fermanagh team and Armagh were doing battle in Division 2 of the League in the Athletic Grounds and things got a little bit heated just before the half time whistle. A good old fashioned brawl developed on the way down the tunnel.

As commentator Dave McIntyre pointed out, the lights go off during the fracas.

Of course, it was Sean Quigley who flicked them on and off. Maybe it was to distract the Orchardmen, or perhaps Quigley felt temporary blindness would cause confusion, and there might've been friendly fire.

Either way, Quigley was smacked with a one month ban and both Fermanagh and Armagh were hit with €5,000 fines.

Club Finals Pandemonium - Fines For Everyone!

St.Patrick's Day 2004 would be costly for all four clubs that had scrapped and fought tooth and nail to get to Croker.

Galway club Caltra, who won the football final, were fined €600 for officials making incursions on the pitch. They beat An Ghaeltacht, themselves punished for their manager not wearing the correct bib on the sideline. €400 down for a bib.

It didn't get much better in the hurling. Dunloy made the trip down from Antrim and came away empty handed against Newtownshandrum of Cork. Well, we say empty handed, they had too many men on the sideline, so they were fined €1,500.

Newtonshandrum officials also incurred the wrath of the GAA after they intruded on the pitch and were subsequently hit with a €600.

A year of no GAA

Losing money to fines isn't the worst thing that can happen. It'll hurt a small club or a weaker county, but they're able to get over it. But imagine your local club got banned from the sport for an entire year. It happened twice in the early 20th century.

First off, Trim GAA in Meath confronted a referee following a match in 1908, and following his report being sent to the GAA board, Trim were banned for six months. That extended to the 1909 Championship, during which Trim lost most of their players to rivals Bohermeen.

The same situation occurred 30 years later for Ballysteen GAA in Kerry. Another pitch incursion, and another ban. An original six-month suspension was extended to twelve months, with Askeaton hurling club also being affected. Not that it bothered Ballysteen - they won the West Junior championship after serving their suspension.

Picture the scene. You're the best hurler in the country, you decide to go on a holiday following the Championship. You play a friendly match abroad, before coming home and finding out you're not allowed play for a year because of it.

That's exactly what happened Tony Keady in 1989. It ranked highly on the greatest GAA sagas which we put together a couple of weeks ago.

Galway fans still think it cost them the three in a row it's probably the GAA punishement that leaves the worst taste in the mouth. All for a puck around on his holidays.

This just misses out on the list because it was a threatened punishement.

Crossmaglen were drawn against Dromintee in the second round of the Armagh club championship. Unfortunately, the date the game was scheduled for coincided with one of the Dromintee players getting married, and so the club requested a reschedule from Armagh GAA.

The Armagh board instead threatened Dromintee that if the fixture wasn't fulfilled, there would be a 48-week ban for all codes and ages, as well as a hefty fine of €5,000.

Cue the likes of Aaron Kernan lining out against men in their fifties, wearing jeans. The shambles only lasted eight minutes, during which Crossmaglenn scored 1-8, before taking part in a training session for the remaining hour.

GAA
6 days ago
By Gary Connaughton
Henry Shefflin Admits He Tried To Lure Joe Canning Out Of Galway Retirement
GAA
3 weeks ago
By PJ Browne
Kerry Players Knew Jig Was Up After 1987 San Francisco Training Session
GAA
1 month ago
By PJ Browne
'It Still Will Be Weird. I Won't Be Going Looking For His Autograph'
Previous Next

GAA
6 days ago
By Gary Connaughton
Henry Shefflin Admits He Tried To Lure Joe Canning Out Of Galway Retirement
GAA
3 weeks ago
By PJ Browne
Kerry Players Knew Jig Was Up After 1987 San Francisco Training Session
GAA
1 month ago
By PJ Browne
'It Still Will Be Weird. I Won't Be Going Looking For His Autograph'
Popular on Balls
Rugby
1 day ago
By Colman Stanley
Bundee Aki Apologises For Confronting Ref After Connacht Concede Late Try
Football
1 day ago
By Gary Connaughton
Report: Newcastle United Lining Up Move For Euro 2020 Star
Snooker
8 hours ago
By Gary Connaughton
Ronnie O'Sullivan Couldn't Get Over Stunning Mark Williams Escape Shot
Rugby
2 days ago
By Jonathan Browne
Who Is Karl Martin? Meet The Young Drogheda Man Making His Debut Against Leinster