There was a striking moment just before the second-half in the Gaelic Grounds last Saturday as Mayo and Galway prepared for the final 35-minute instalment of their 'do-or-die' clash.

29 players took to the pitch and prepared for the throw-in. One did not. At his ease, Aidan O'Shea eventually emerged and strolled across the field. Gradually Galway supporters became more agitated and Joe McQuillan ushered him along but even still, O'Shea never broke into as much as a jog and took his time. 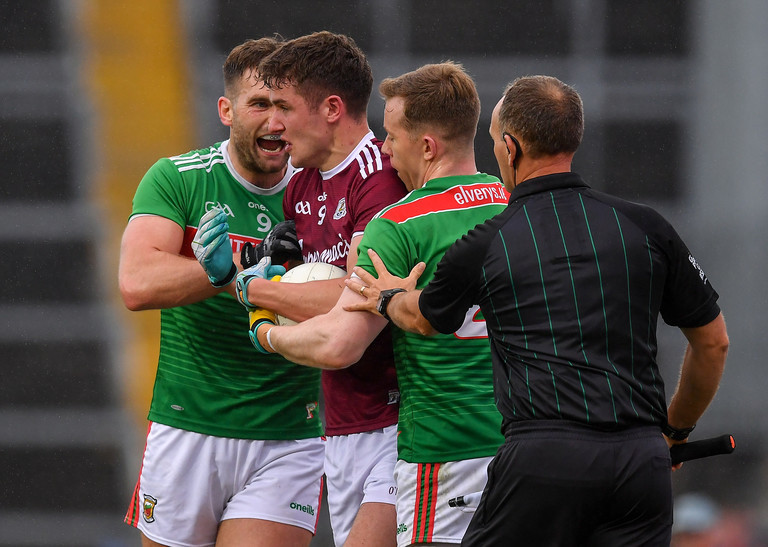 It was as clear a message as Mayo would send all day to their Connacht rivals; 'we are doing this on our terms.' They were quick when they needed to be and slow where possible. Never disturbed, always comfortable.

In stark contrast to the lethargy demonstrated by O'Shea, Mayo trainer James Burke's involvement in James Carr's first goal was positively rapid. The goal came from an inaccurate kick-out which skewed out over the sideline.

Then Burke reacted. Immediately the Ballymun Kickhams man ran after the ball and fired it to Doherty to allow Mayo to take a quick sideline. Galway were still scrambling by the time the play re-started and their sweeper was yet to drop into position and cut off supply to Mayo's inside line.

The kick-out went over the sideline. 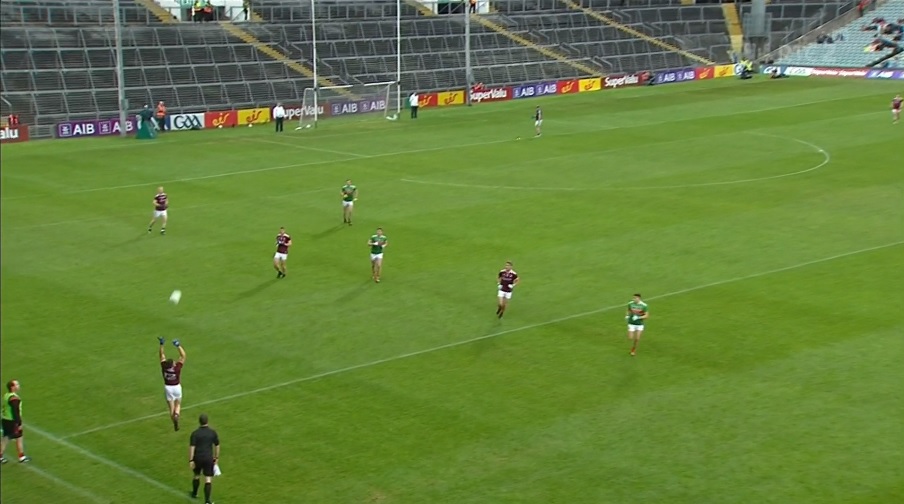 Burke raced after the ball. 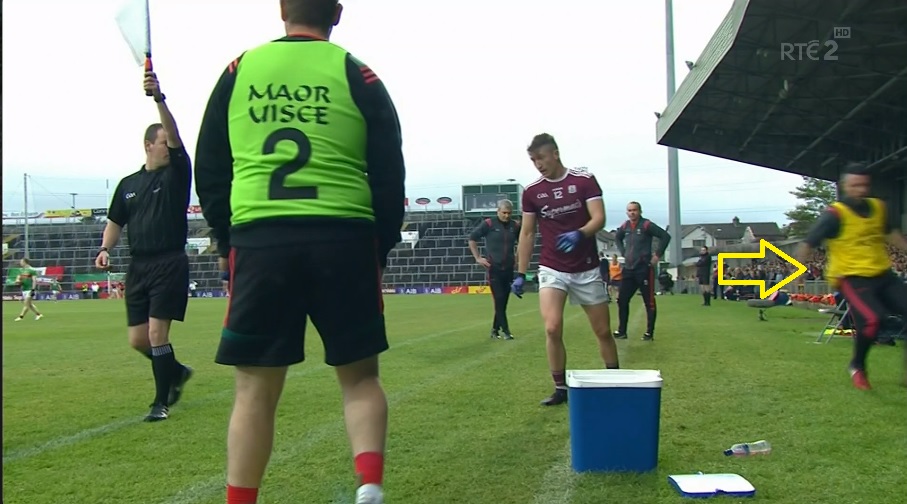 Mayo started their attack before Galway could re-organise. 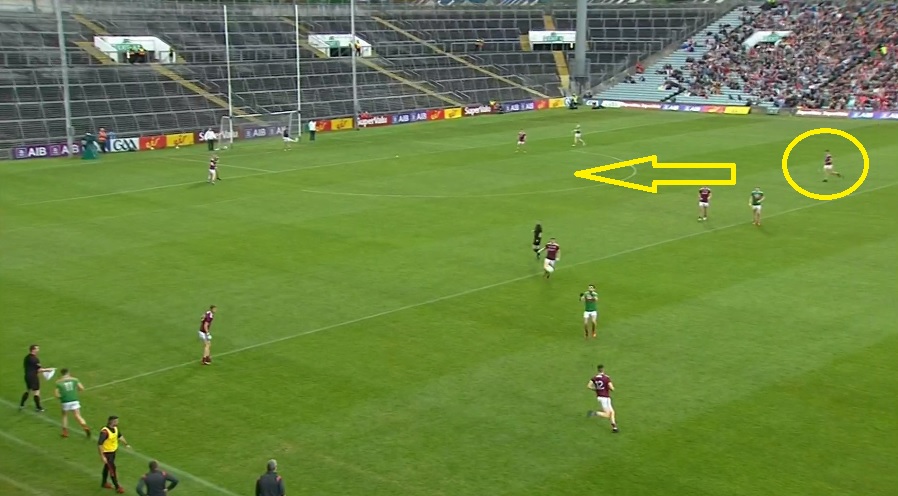 It finished in a goal.

Power's problem was indicative of Galway's season-long struggle with innovation. Mayo had a basic 'bunch and break' kick-out strategy which included movement and options. Power was met with a wall of static bodies. The plan appeared to centre around getting a kick-out off quick or going short. 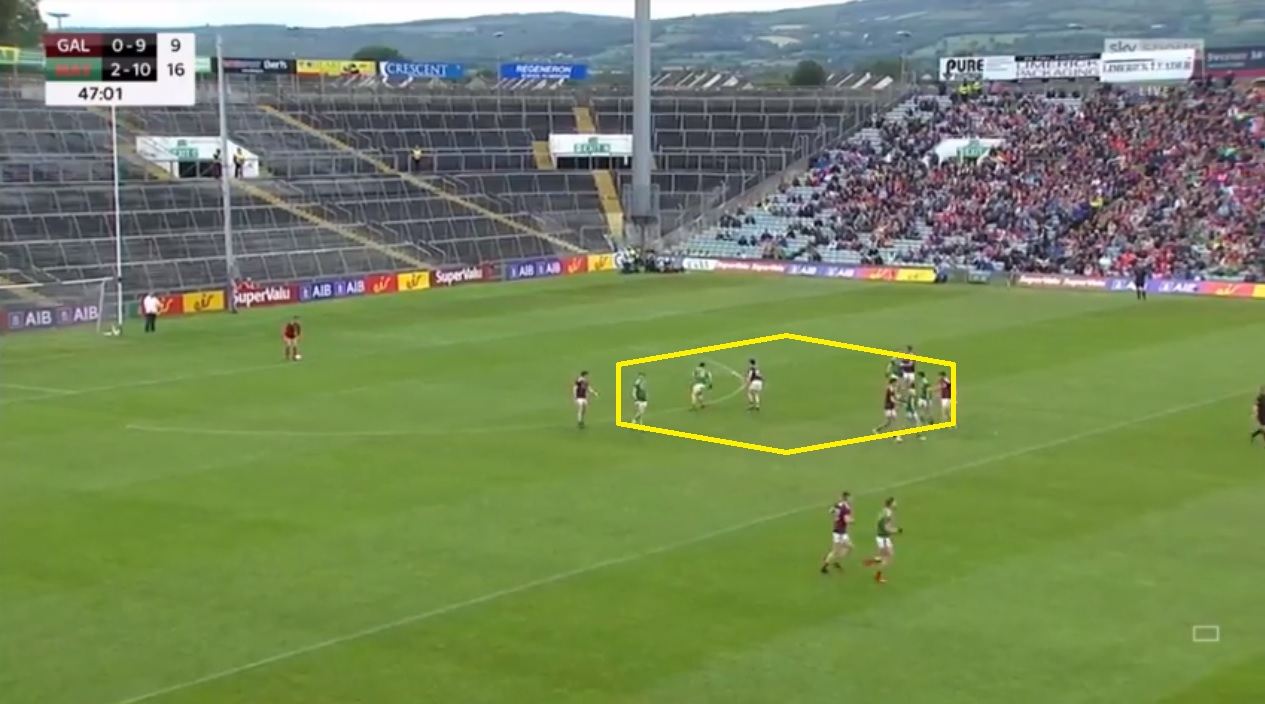 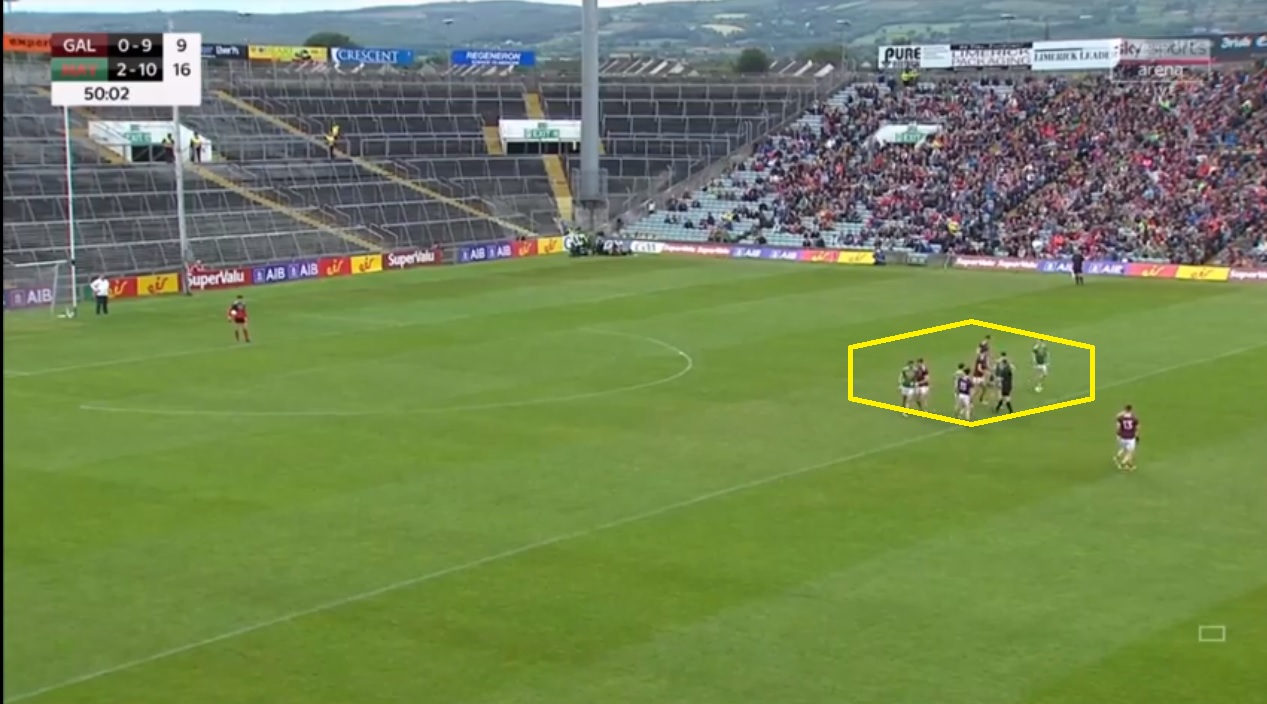 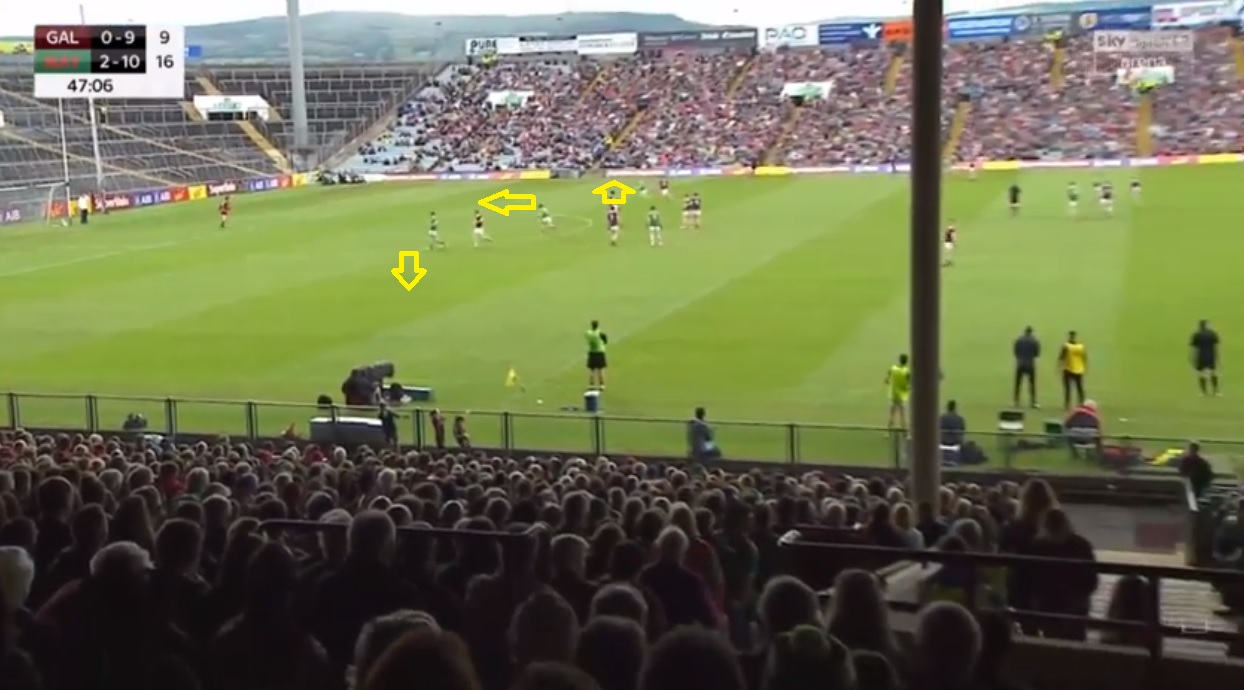 Galway: Power gestures and waves players towards him 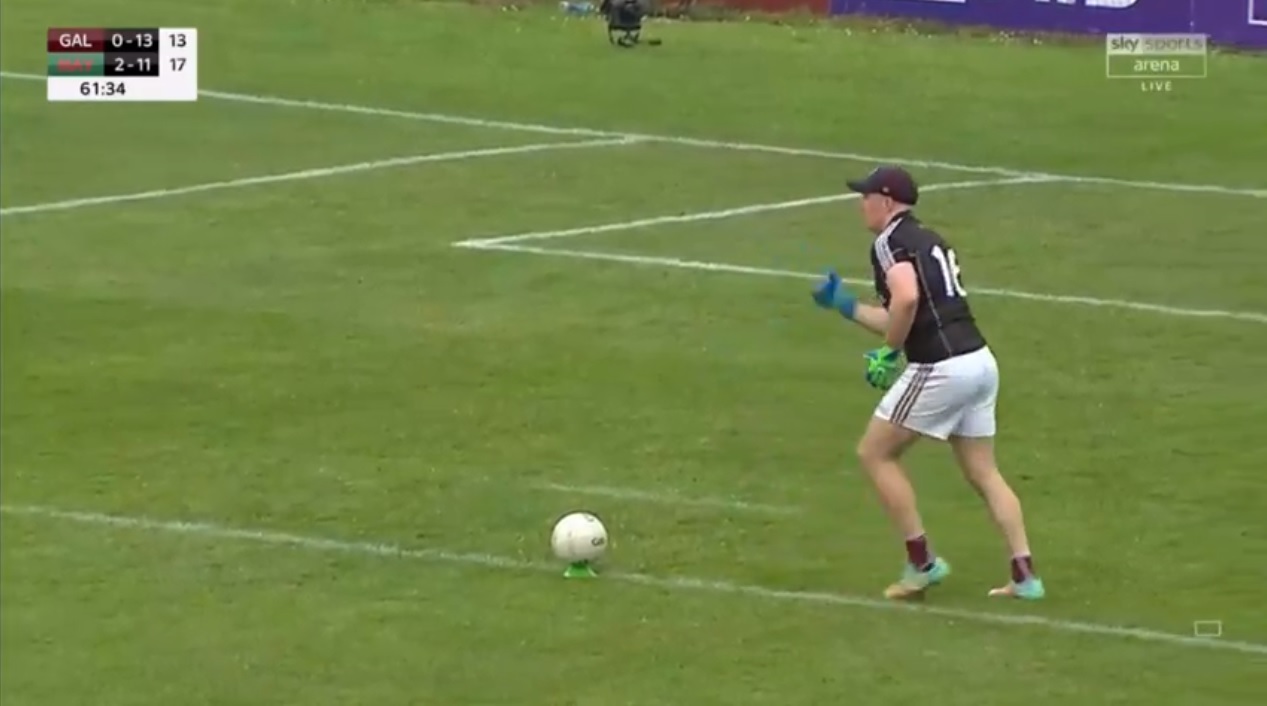 Galway: Players are static, midfield drift to one side. Little or no movement. 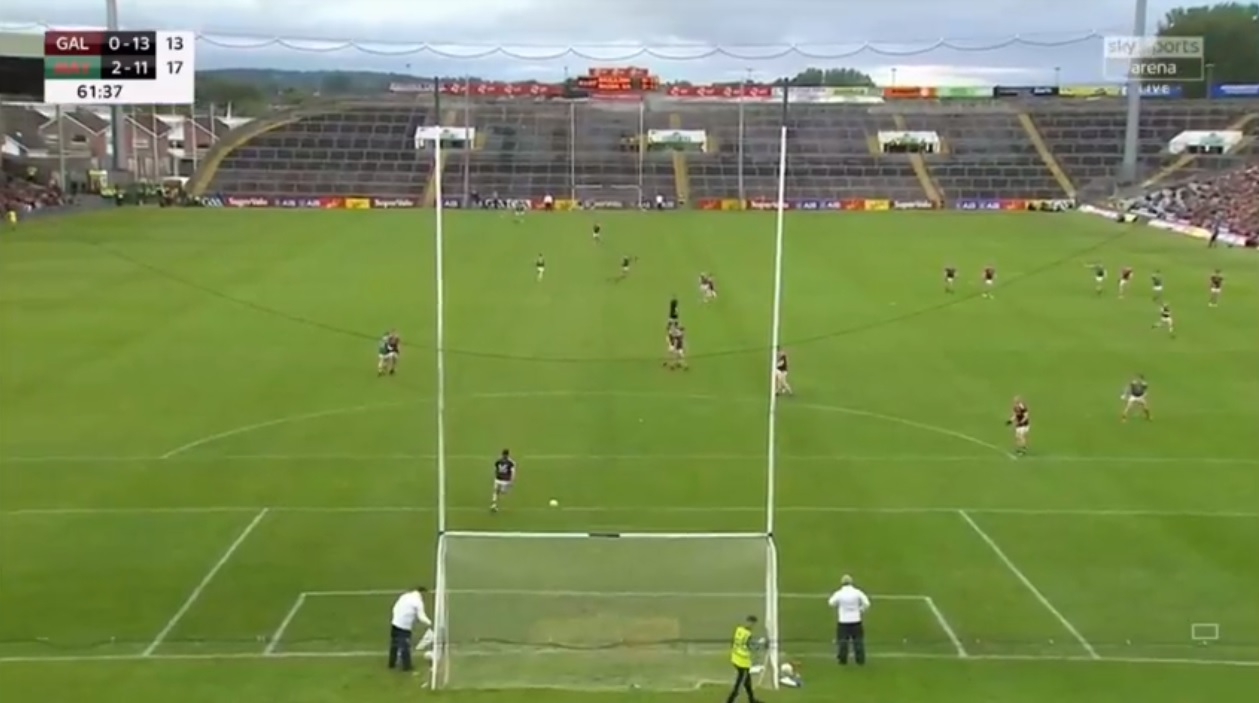 Galway's strategy demonstrates where so many go wrong with their kick-outs. Former Armagh footballer and tactical columnist Aidan O'Rourke gave an insightful coaching seminar last November on this area of the game. Yet before he got into running lines and communication methods, he made one thing abundantly clear.

The obsession with kick-out retention is nonsensical. The true test of a successful kick-out is converted scores. That's the point of the game and the only way you can win, to score.

You can tap a ball to a corner-back all day, rack up a 90%+ success rate and watch helplessly as your players get turned over out the field time and again. Nothing should be analysed as binary, the overall picture is imperative. 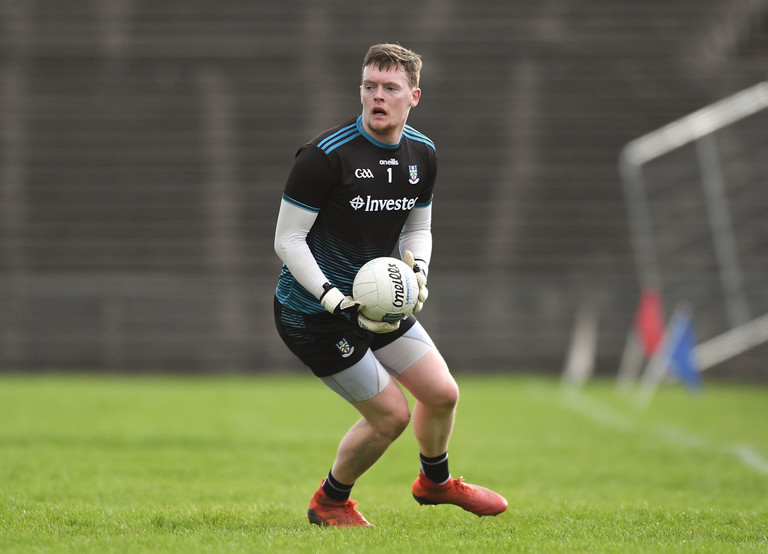 A man who knows this well is Monaghan goalkeeper and 2018's All-Star Rory Beggan. Speaking to Balls.ie, he explains that he struggled to understand the approach adopted by Kevin Walsh's outfit last weekend.

I remember watching the game Saturday and saying to myself, 'what are Galway doing?'

They went man on man for Mayo's kick-outs and Clarke's strength is chipping the ball to a man on a run. He’ll do that 100 times out of 100 in a game if you let him.

Galway never picked up on it. David Clarke was forced long the odd time and Galway did win the break but a lot of the time Mayo bunched in and Galway just followed them. I mean you could drive cars up either side of the pitch, there was that much space left there.

For Beggan, Galway's previous strategy worked well and their decision to move away from it proved costly.

"I thought Galway went away from what they did well. When Ruairí Lavelle was in goals they used clusters on either side of the field. On Saturday they seemed to rely on Power’s accuracy.

"I watched him in club football and in fairness, he’s a very good keeper and can pick them out, but you are only as good as the people in front of you who are moving.

"Galway have never really been good for movement, they used those clusters on the wing and took it from there."

With his club, Corofin, Power used a hand signal to instigate movement and then hit space. Galway did not utilise this tactic.

The ball goes long and Corofin have a two v one and break up the field to score. 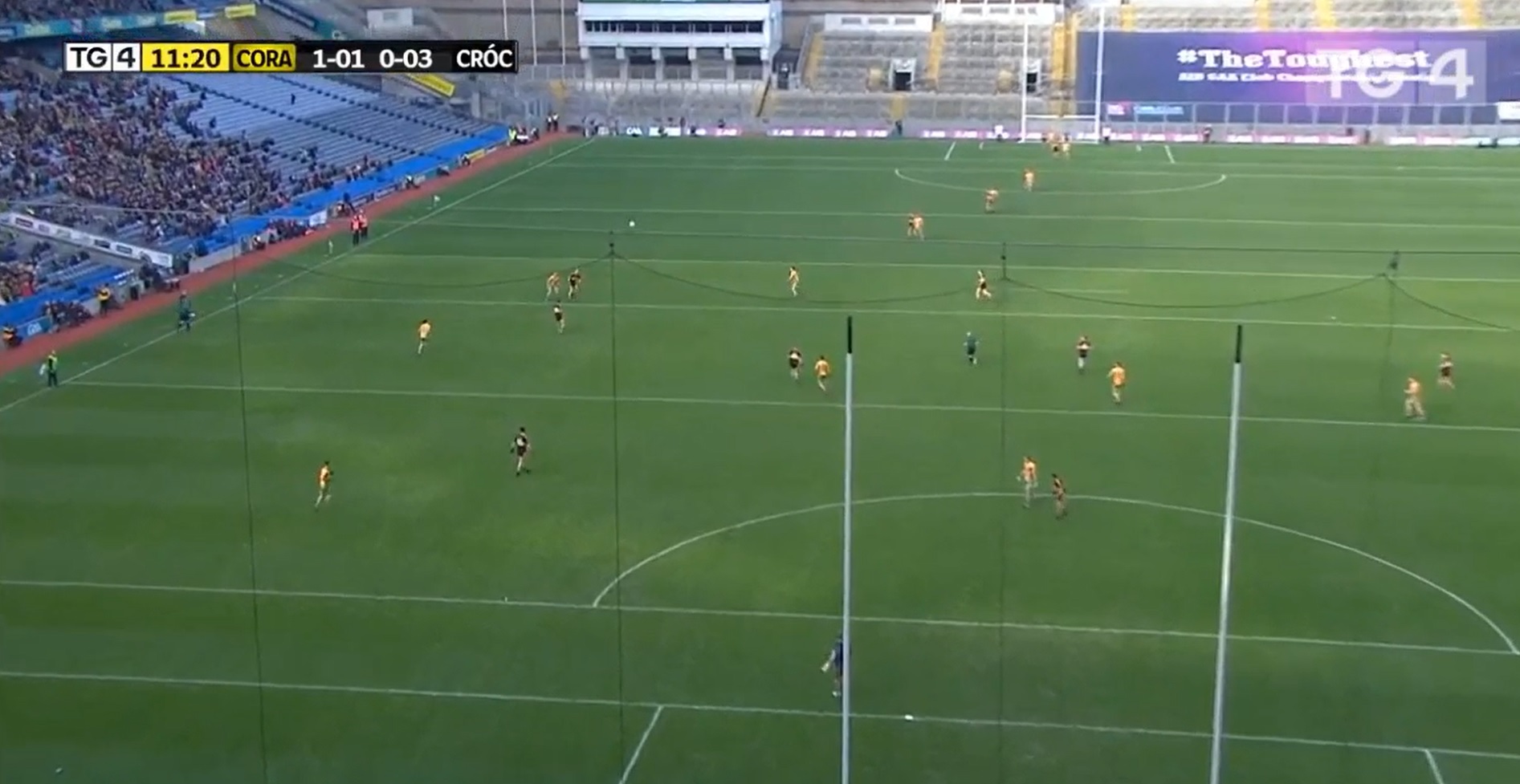 Saturday illustrated the increasing challenge for goalkeepers and it will only get worse if the proposed back-pass ban is implemented next year. The Scotstown club man is quick to cite the damage that could do to the position if it is forced through.

It’s a lonely spot. Goalkeepers don’t want to be resigned to standing there and kicking the ball out. We enjoy it. Even for club games, I like getting out. I restricted myself more for Monaghan this year but I enjoy getting on the ball for the club and it’s an added dimension to what you do.

After all, goalkeepers are footballers too: "It seems to be, we are there to do one job and only one job."

Nothing happens in isolation and the same is true for kick-outs. Beggan sees the recent evolution as a major positive and points to the opposition's impact on the supposed problem.

If your press is good enough and everyone is tight, that should not happen. If a press is good enough, full-court, you need to force the opposition long. The goalkeeper uses that option to exploit your opposition. With the calibre of keepers these days, Cluxton, Morgan, whoever else, they don't want to give a handy fist-pass.

Furthermore, it's certainly not easy. Few can match what the best currently do, and that's to be celebrated not censured. 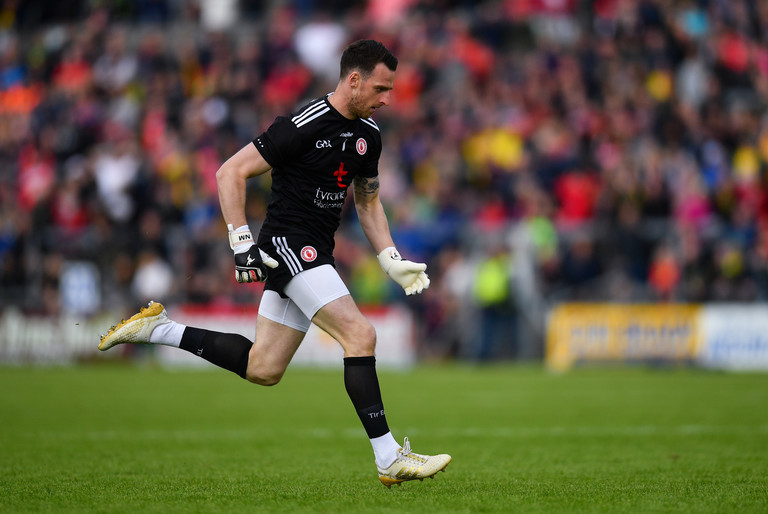 "Watch Niall Morgan. I would be very complimentary towards Niall.

"The way he plays the game now, he is sweeper-keeper and gets on a lot of play. He wants to go up the field. He can spray ball wherever he wants and can play sweeper keeper. It is really impressive. if you then take that away it would be mind-boggling.

"I've noticed the best keepers, when they get the ball their head up is looking for a kick-pass. They don’t want to play in their full-back line. I notice Niall Morgan gets the ball and his head is up looking for a 60-yard pass. He can hit it too, bang on.

"If that’s not positive football, I don’t know what is. "

GAA
2 months ago
By Mark Farrelly
Quiz: Name Every All-Ireland Football Final Man Of The Match This Decade
26

GAA
8 months ago
By Maurice Brosnan
'If I Took A Break But Stayed Here, You Don’t Get Away. You Would Hear Talk Constantly'
4