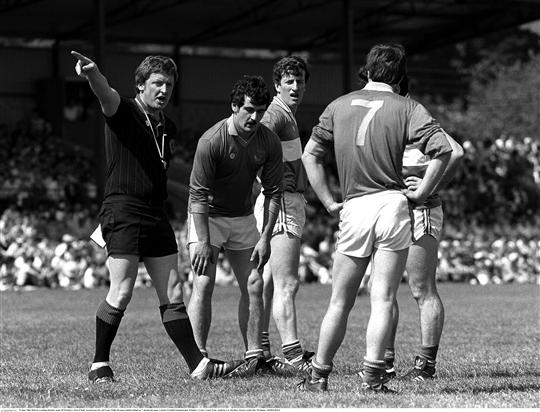 Carthage Buckley, the man who refereed the Battle of Aughrim between Wicklow and Laois in 1986 was on Radio Kerry's Terrace Talk on Monday night and spoke about the infamous game.

Buckley sent off four players in the Championship match, three from Laois and one from the home side. Laois were highly fancied on the day, having just beaten the previous year's All-Ireland winners, Kerry, weeks beforehand in a challenge match to mark the opening of the renovated Portlaoise GAA grounds.

Their supporters were furious with the official. He spent 45 minutes after the game holed up in the dressing room, what he describes as a glorified shed, on a scorching hot June day waiting for a baying crowd the dissipate.

Eventually, with the help of a guard, a move was made for his car. Rumours that he had to be smuggled out of the ground in the boot of the vehicle are erroneous according to Buckley but his car did take damage from supporters still present. Back roads were taken on the return trip to Offaly, avoiding Portlaoise. Home was reached at midnight.

Some time after the game, he received a letter, post marked in Athy and signed "Laois Trio."

Buckley, you rotten no-good so and so. You robbed us out of the Leinster final. If you put off the three lads for using the fist, what broke Gerry Browne’s nose. You so and so. Your so and so linesmen.

Don’t forget we are watching you. It may not be now but don’t travel too far on your own from home. You are going to get what they are getting in the North, the bullet.

And we mean every bit of it. You may never get the chance of taking the whistle in your hands again. I think you were treated with a bit of right in Laois. We are not letting you away with it, no way.

We don’t mind what happens to us so long as we get you. Besides it will never be known who did it. It may go a while but we will get you and your car.

The Offalyman never reported the letter to the authorities and had no further contact with the Laois Trio.

Carthage has spoken about the letter previously, most recently on Newstalk's Off The Ball.

You can listen to the full interview on the Radio Kerry website.