A journey that began in April finally has the two protagonists that will see to its conclusion - Kerry will take on Galway in this year's Electric Ireland GAA Minor Football Final.

Of the counties who made it to the semi-final stage, the Munster and Connacht champions entered this final four unbeaten. Whereas Monaghan and Meath had shipped one defeat each during their run to provincial success, Kerry and Galway have been absolutely flawless.

As such, it seems fitting that both will contest what will be a replay of the 2016 final.

With Kerry going for a record-extending fifth successive title, the young Tribesmen will be hoping to end an eleven year wait for minor success. However, as impressive as both sides have been in this year's Electric Ireland GAA Minor Football championship, neither Kerry nor Galway had it all their own way in this weekend's semi-finals.

Having looked very comfortable with a sizable lead over Monaghan in Sunday's game, 14-man Kerry were forced to dig deep in an effort to see out this semi-final. With seven minutes of injury time added on, it came down to Paul Walsh and Jack Kennelly to see Kerry through their biggest challenge of the year thus far. A spirited Monaghan team pushed Kerry to the very limit.

For Galway, they were perhaps fortunate to come up against a Meath team that failed to demonstrate the kind of performances they have shown themselves to be capable of this year. With the addition of three rapid second-half goals for the Tribesman in a 6-minute window, the 3-13 to 2-9 flattered Galway somewhat, but, overall they were good value for their win.

With the Electric Ireland GAA All-Ireland Minor final to come on September 2, one of the only two unbeaten sides remaining in this year's championship will see their record come to an end at the most harrowing stage of all. Who will lift the Tom Markham Cup? A truly amazing minor final awaits in three weeks.

In a weekend of memorable performances from the country's best young footballers, three young men especially stood out. The Electric Ireland GAA Minor Star Award's judging panel of Sean Cavanagh and Daniel Goulding highlighted the following three great performances from the weekend's semi-finals. Have your say your say and go to the Electric Ireland Facebook page to vote for your Minor Footballer of the Week 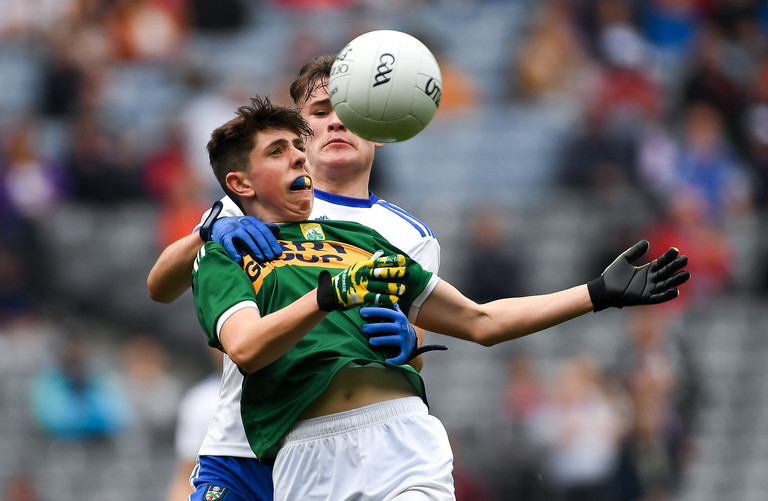 A cousin of Kerry's senior star Paul, Dylan Geaney was instrumental in assuring that at least one of the county's sides will be present on All-Ireland final day.

In a game that had looked sewn up in Kerry's favour, only to be blown wide open again after two quick second-half Monaghan goals, Geaney's first-half performance provided the Kingdom with a platform that would prove essential in holding off Monaghan's late fight back.

Scoring 0-5 of his side's 0-10 total as the first-half came to a close, Geaney's contribution to the score-taking may have abated somewhat in the second-half, but his astounding accuracy with ball in hand had captured the attention of many watching on.

Dylan Geaney looks a chip off the old block

Looking entirely unfazed in the illustrious surroundings of Croke Park, Galway will be all too aware of the threat Geaney poses when the sides meet in the Electric Ireland GAA Minor football final.

Capable of picking off points from seemingly anywhere he wishes, Dylan Geaney might just be the latest in a long line of impressive Kerry forwards to watch in years to come. 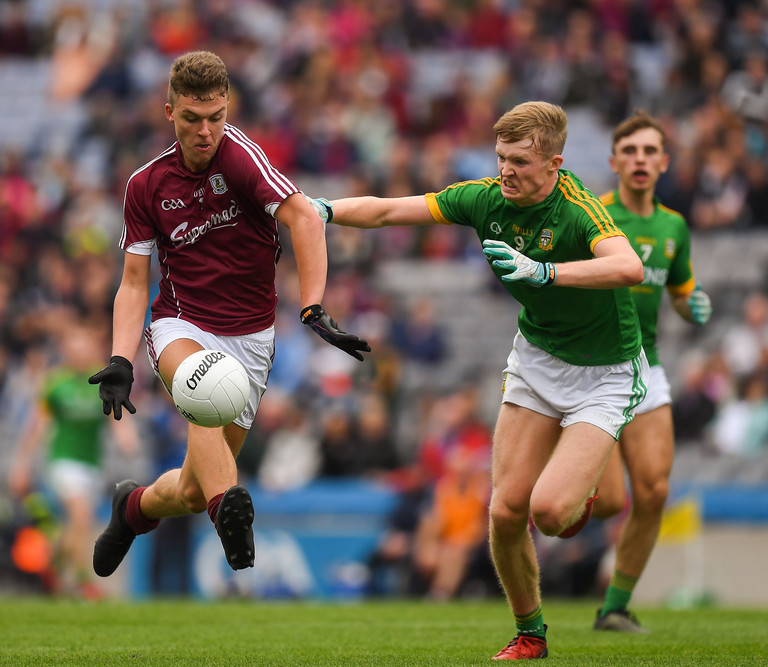 While the 3-13 to 2-9 scoreline scarcely does justice to what Meath contributed in this All-Ireland semi-final, Galway's Aidan Halloran delivered a stand-out performance as the Tribesman continue their search for a first Electric Ireland GAA Minor Football championship in eleven years.

Quickfire goals from Eoghan Tinney, Oisín McCormack and Tony Gill were detrimental to the Leinster champions' cause. That they came in a short burst between the 39th and 46th minute only served to heighten their impact further.

Although this frantic few minutes left an indelible mark on proceedings, the Salthill-Knocknacarra man playing centre-forward demonstrated a consistent level of excellence that Meath found too hard to handle, and would result in him being named man-of-the-match.

Contributing 0-4 from play, Halloran, despite all the goals, was Galway's top-scorer on a memorable day in Croke Park. Having scored solitary points in the Tribesmen's Connacht final and All-Ireland quarter-final wins, Saturday evening's defeat of Meath saw the young forward come into his own.

This first-half score not only finished off a wonderful team move by Galway, it also demonstrated Halloran's patience, composure and deadly accuracy with the ball. 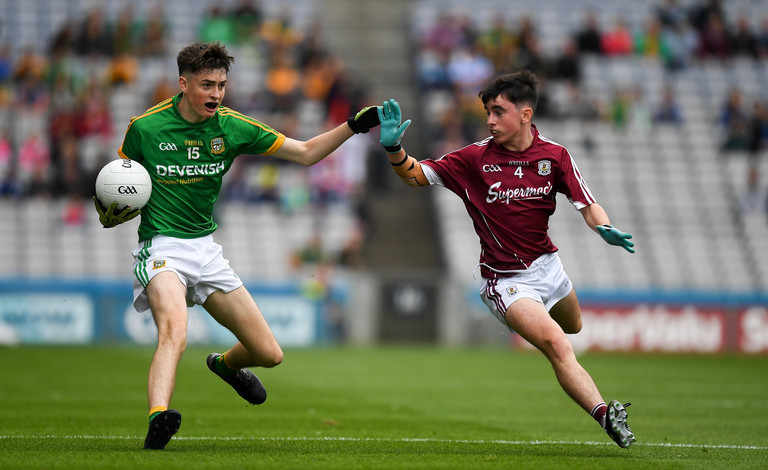 Although it has come to a premature end, Luke Mitchell's year with the Meath minors has been a demonstration in phenomenal forward play.

Instrumental in guiding his side beyond the threats of Dublin and Kildare in Leinster, past a serious Derry threat in the All-Ireland quarter-final, even on a day where Meath fell at the penultimate hurdle, you can't imagine Mitchell could have given much more than he did.

Scoring 1-4 of Meath's 2-9 in Saturday's All-Ireland semi-final defeat, had it not been for a 6 minute spell in which Galway grabbed all three of their goals, there is every chance Mitchell & co would be gearing up for a shot at Kerry in the minor final.

Having started the game well, Mitchell grabbed Meath's first goal of the game half-way through the opening 30 minutes. Getting on the end of a well-worked move, he finished the ball beautifully beyond Galway's Donie Halleran.

Luke Mitchell buries it in the back of the net for the Meath minors! pic.twitter.com/oL04s0gCwx

Speaking post-match, Meath's manager Joe Treanor highlighted the importance of not letting an impressive generation of Meath players "slip through the cracks."

In terms of Mitchell, the county has a player who has already demonstrated the potential to be a fearsome prospect at U20 and senior level in years to come.

GAA
2 years ago
By Maurice Brosnan
Kerry's Paul Walsh Named Electric Ireland Minor Footballer Of The Year
GAA
2 years ago
By Gary Connaughton
In Pictures: Electric Ireland GAA Minor Star Awards Take Place In Croke Park
GAA
2 years ago
By Arthur James O'Dea
'We Were All Just Finishing Our Confirmation When It Started': How The Kerry Minors Made GAA History
Popular on Balls
Premier League
15 hours ago
By Michael McCarthy
Quiz - Can You Name Manchester United's Top 3 Goalscorers From Each Premier League Season?
Football
15 hours ago
By Gary Connaughton
Paul Scholes Is Unconvinced By A Manchester United Move For Jadon Sancho
29