Class And Controversy As Mannion Masterclass Sees Galway Past Kilkenny

A 2-22 to 3-20 finish only tells part of the story. There were cards and controversy galore as referee Colm Lyons was kept busy, sending off three different players during a frantic finish. 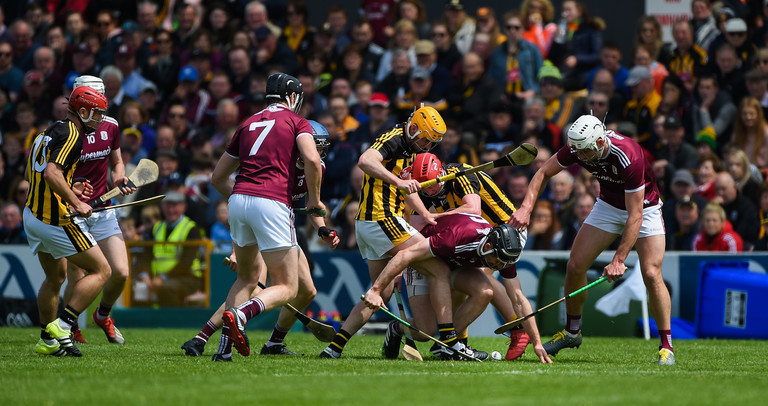 The Tribesmen ventured into the heart of hurling in search of a precious two-points and new leaders in the absence of Joe Canning. Cathal Mannion emerged to fill that void in a man of the match performance.

Named at half-forward but playing in midfield, the Ahascragh-Fohenagh man finished with 0-8 from play in a sensational showing.

More than Mannion came of age. Jason Flynn finished with 0-3 after a rocky start while he teamed up with Brian Conconnan to land a vital goal late on.

The finale was grand. Firstly, Galway had John Hanbury sent off for a head-high tackle. Then, Ger Ger Aylward was shown a second yellow and the line after reacting to a foul.

TJ Reid was presented with a close free in extra-time, but the manner of the finish was questionable.

Four minutes were added on. 70.14 was when the Kilkenny man was fouled. 72.30 was when the free was taken after two different Galway defenders were shown yellow cards. The final whistle sounded at 74.14.

It takes TJ at least two minutes to take the free, they call 4 minutes injury time and Colm Lyons blows it up on 4minutes?? An absolute joke, standard of officiating hasn't changed much........

It means Galway march on, regardless of next weekend's result. Victory over Dublin would secure a Leinster Final spot. As for Kilkenny, a win against Wexford would be enough, but a loss combined with a Dublin win could see them out.

All to play for yet.